Chairman Donald E. Powell is quoted in the FDIC's 2003 Annual Report as stating, “During 2003 our focus was to promote the stability of the financial services industry, develop and effectively articulate sound policy, and research and administer corporate operations in a manner consistent with good stewardship of the deposit insurance funds.”

Includes one SAIF institution failure in 2002. Back to table
Losses for all resolutions occurring in this calendar year have been updated through 12/31/03. The loss amounts on open receiverships are routinely adjusted with updated information from new appraisals and asset sales, which ultimately affect projected recoveries. Back to table

Source: FDIC, 2003 Annual Report and Reports from FDIC Division of Finance and Division of Research and Statistics.

To facilitate industry cooperation with law enforcement authorities in their ongoing investigation of terrorist activities through the implementation of Section 314(a) of the USA PATRIOT Act, the FDIC also worked with other federal banking regulators to incorporate point-of-contact information as a required item in the Call Report, beginning with the March 2003 Call Report. The FDIC is the only banking regulator to use this mechanism thus far to provide current point-of-contact information to the Financial Crimes Enforcement Network (FinCEN) to aid in its distribution of Section 314(a) information-sharing requests.

One of the Corporation's top priorities in 2003 was the continued promotion of financial education through its Money Smart Program. The FDIC was awarded the prestigious Service to America Business and Commerce medal in October 2003 for its efforts in promoting financial literacy using the Money Smart curriculum. These medals honor people and organizations that have shown a strong commitment to public service and have made a significant contribution in their field of government that is innovative, high-impact and critical for the nation.

Since its introduction in July 2001, the Money Smart program has generated a great deal of interest. Primarily designed to help adults with little or no banking experience develop positive relationships with insured depository institutions, the program has been widely cited in over 100 national and local publications. Requests for the program have been received from Mexico, Thailand, and Canada. During 2003, the FDIC continued to expand the public's access to Money Smart by translating the program into Chinese and Korean and expanding membership in the Money Smart Alliance. By year-end 2003, the FDIC had trained over 5,000 volunteer instructors, taught over 100,000 consumers and supplied more than 111,000 copies of the Money Smart training curriculum to various groups, including government, community, financial, and faith-based organizations.

The U.S. economic trends were more positive as firms improved operations and globalization moved more to the forefront. GDP was up over 100 basis points to 4.9 percent. Unemployment decreased to 6.1 percent and total employment improved by 1.5 percent. Inflation was a modest 1.9 percent. In response to the warming economy the discount rate was raised to 2 percent, but prime rate was reduced to 4 percent, and the 30-year mortgage rate average dropped to 5.9 percent. Housing starts increased by 8.3 percent to 1,847,700, and existing sales were up 11.5 percent. Office vacancies were relatively flat, however, with a slight increase of 0.3 percent to16.8 percent. Even with employment growth, the office market was still recovering from a certain amount of ‘shadow space’ overhang from earlier dramatic office worker reductions. Shadow space is unoccupied, usable space within a leased building that could not be shed due to contractual obligations as the firms reduced staff.26-1

The net interest margin reached its lowest year-end point in more than 10 years, at 3.8 percent. Recent margin compression, a consequence of the very low interest rate environment, contributed to declining profitability, particularly for small banks. Non-interest income increased to a record 44 percent of total revenue, which can largely be explained by the increased servicing fees. Non-interest expense grew slightly during 2003.

Commercial and Industrial loans declined 4.6 percent in 2003 which can be attributed to a tightening in lending standards and increased competition from nonfinancial firms, creating a lower demand for loans. The delinquency rate fell one full percent to 2.9 percent. Home mortgage rates dropped, causing record-breaking home sales. The growth in home mortgages and refinancing caused the share of total bank assets for residential mortgages and mortgage backed securities to be 28.5 percent at the end of the year. Bank securities expanded in 2003—at a 9.4 percent growth rate (the second highest it has been in the last decade).

Table 26-2 shows the number and total assets of FDIC insured institutions, as well as their profitability as of the end of 2003.

During 2003, the FDIC resolved three BIF-insured institution failures using purchase and assumption agreements; the most notable of which was the failure of Southern Pacific Bank (SPB), Torrance, California. SPB, with total assets of $1.1 billion, was closed on February 7. The insured deposits and a large portion of its assets were sold to another FDIC-insured institution. SPB had several unique business lines within its commercial loan portfolio including movie production and distribution, commercial aircraft lease financing, leasing of tobacco drying facilities, telecommunications, and asset based lending. Additionally, SPB's wholly owned subsidiary, Imperial Warehouse Finance, Inc., was an active residential mortgage warehouse lender that financed some 12,500 mortgages for more than $2.4 billion during its last full year of operation.

A more recent estimate of losses per transaction type is shown in Table 26-3.

There have been a total of 2,229 insured financial institution resolutions since the FDIC began operations in 1934. Of this total, 1,480 were P&A transactions, 141 were open bank assistance transactions, and 608 were deposit payoff transactions.

Total disbursements by the FDIC since January 1, 1934, have amounted to almost $112.5 billion. Of that amount, actual and projected recoveries are anticipated to be approximately $73.5 billion, which equates to a projected loss of $39 billion to the BIF/SAIF funds.

The FDIC also had over $76 million in non-asset related collections during this year. While these collections came from a number of different sources, $38 million was the result of recoveries from fidelity bond insurance claims, director and professional liability settlements, and criminal restitutions, and another $9 million represented recoveries of state and federal tax benefits due to failed institutions. Within 10 months after the failure of SPB, the receivership had resolved almost 94 percent of SPB's assets.

Table 26-4 shows the FDIC's assets in liquidation and Chart 26-1 shows the asset mix. 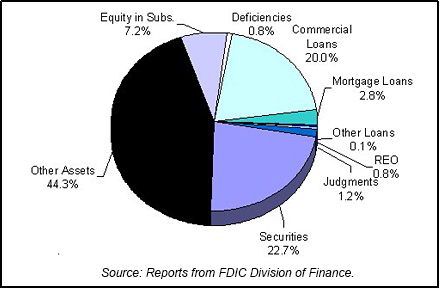 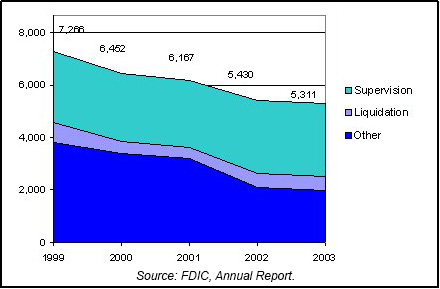 The FDIC has been downsizing its workforce for more than a decade, as the residual workload from the banking and thrift crises has gradually been completed. In mid-2003, a reduction in force was implemented to address 43 identified surplus positions that remained following aggressive efforts in 2002 and early 2003 to align staffing with current workload through voluntary measures. Total staffing for 2003 declined 2.2 percent from the year-end 2002 figures, for an ending total of 5,311.

Staffing at the FDIC has decreased 66 percent since the all-time high total of 15,585 at the second quarter of 1992. Chart 26-2 shows the staffing levels for the past five years.

The FDIC initiated a number of projects in 2003 to better manage and leverage its resources to meet potential challenges in the resolution of future financial institution failures. These projects were in the areas of processing depositor claims, franchise and asset marketing, asset valuation and sales, asset servicing, receivership operations and management, information systems, planning and communication, cost containment, and field operations.