Significant events of 1980 affecting the FDIC and the banks it supervised included unprecedented interest rate levels and fundamental reform of the banking laws. An increase in federal deposit insurance to $100,000 from $40,000 per depositor was one significant feature of the Depository Institutions Deregulation and Monetary Control Act (DIDMCA) of 1980, signed into law on March 31, 1980, by President Jimmy Carter.

Includes open bank assistance for First Pennsylvania Bank, N.A., with assets of $8 billion. Excluding this transaction, the percent change would be 79.95 percent. Back to table

In addition to the stresses produced by high interest rates, financial institutions had to cope with the changes created by the passage of banking deregulation legislation. DIDMCA was the most sweeping banking reform package enacted since 1933 and began the gradual process of removing the restrictions that had placed a ceiling on the interest rates banks could offer their depositors. It sought to deregulate banking and promote more competition to benefit consumers; it also liberalized lending powers of federal thrifts and preempted some state usury laws.

The U.S. economy showed broad-based weakness in 1980. The growth in Gross Domestic Product (GDP) declined, interest rates rose as did inflation, and job growth was meager. Growth in real GDP was sluggish for the second consecutive year, declining almost 0.3 percent after 1979’s slow but moderate 2.9 percent growth.3-2 The nation’s unemployment rate jumped to 7.2 percent from 5.8 percent in 1979.3-3 Real estate markets showed mixed signs. Home sales were down 22 percent and housing starts were also down 26 percent from the previous year.3-4 On the other hand, office markets remained tight, with the national office vacancy rate at a stable and very low 4.9 percent.3-5 The deterioration in the residential sector was due in part to steadily rising interest rates. The discount rate rose to 11.8 percent, and the 30-year mortgage rate was up to 13.8 percent.3-6

Some regions of the country were experiencing better economic times than the rest. California’s economic expansion was above the national average at 1.7 percent Gross State Product growth,3-7 in part due to the solid performance of the defense-related industry in southern California. The growth was also a result of the high number of primary government contracts in that part of the state. Low commercial vacancy rates sparked rapid growth in the real estate market.3-8 Commercial and Industrial (C&I) loans rose slightly from 17.6 percent of bank assets in 1979 to 17.9 percent in 1980 and were well above the national median of 9.6 percent; southern California had the highest levels in the nation at 20.6 percent of bank assets. California was, in fact, the only state to surpass the country’s median in all loan categories as a percent of bank assets. The state’s gross loans and leases were 60.4 percent, total real estate loans were 17.2 percent, commercial real estate loans were about 8 percent, and C&I loans were 17.9 percent.

The Southwest region’s C&I loans also increased, to 13.2 percent of bank assets, above the national median of 9.6 percent, while the region’s total real estate loans at 12 percent of assets fell well below the national median of 18.1 percent. The region’s farm sector growth continued from the 1970s. Farm production, farm prices, and agricultural exports were all increasing in the 1970s, and those factors were boosting the local economy.3-9 As the 1980s began, U.S. farmland exports exceeded $40 billion, farm prices had nearly doubled since 1970, and farmland value per acre had increased by 220 percent since 1975. Agricultural lending had also increased by 359 percent since 1970, to a total farm debt level of $178.8 billion.3-10

Adding to the economic growth was the strong demand for oil around the world with OPEC restrictions causing oil prices to rise. That, in turn, sparked an increase in demand for oil rigs and drilling in the Southwest.3-11 There was a great deal of lending in those two industries based on the belief that they would continue to be profitable and prices would continue to rise.

Geographic and product limitations on banks and thrifts kept the U.S. depository institution industry diffused and segmented. At the end of 1980, there were 14,434 commercial banks with total assets of $1,855.7 billion; 4,005 savings and loan associations with assets of $620.6 billion; 323 mutual savings banks with assets of $153.6 billion; and 21,467 credit unions with assets of $69 billion. Thus, at the beginning of the turbulent 1980s, the U.S. had more than 40,000 state or federally chartered depository institutions that together controlled approximately 60 percent of total financial assets. The remaining 40 percent were controlled by insurance companies, pension funds, securities brokers and dealers, money market funds, finance companies, and other financial firms.

Deposit insurance continued to provide needed protection for consumers and small depositors. Large depositors and other bank creditors perceived that their funds were only minimally at risk, if at all, because most bank failures resulted in mergers in which all depositors were protected against loss. As rates were deregulated, depositors began to place their money in those banks and thrifts that were paying the highest rates, without regard to the management or financial stability of the institutions.

As part of its monitoring system, the FDIC maintained a list of problem banks. Banks were rated under the Uniform Financial Institutions Rating System, also known as the CAMEL system, which rated the Capital, Assets, Management, Earnings, and Liquidity of banks as they were examined. Each component was assigned a number from “1” to “5,” with “5” being the worst. The bank then received a composite rating from “1” to “5,” with “5” again being the worst. Banks with a composite rating of “4” or “5” were placed on the problem bank list. The number of banks on the list, which had reached 485 in November of 1976, declined steadily and was 217 at the end of 1980, representing about 1.5 percent of insured commercial banks.

Table 3-2 compares the number and total assets of FDIC insured institutions, as well as their profitability as of the end of 1979 and 1980.

In the early 1980s, the FDIC relied on two basic methods to resolve failing banks: the purchase and assumption (P&A) transaction and the deposit payoff. When determining the appropriate method for resolving bank failures, the FDIC considered a variety of policy issues and objectives. Four primary issues were (1) to maintain public confidence and stability in the U.S. banking system, (2) to encourage market discipline to prevent excessive risk-taking, (3) to resolve failed banks in a cost-effective manner, and (4) to be equitable and consistent in employing resolution methods.3-12

Another resolution method that was beginning to be used more and more was open bank assistance (OBA). The Federal Deposit Insurance Act of 1950 included an OBA provision, granting the FDIC the authority to provide assistance, through loans or the purchase of assets, to prevent the failure of an insured bank. The FDIC’s authority to provide OBA was expanded by the Garn-St Germain Depository Institutions Act of 1982, which eliminated certain prohibitive features of the former Act. Figure 3-1 provides specific information on each type of resolution method.

A Purchase and Assumption Agreement (P&A) was an agreement in which the acquirer purchased some or all of the assets of a failed bank and assumed some or all of the liabilities, including all insured deposits. As part of the P&A transaction, the acquiring institution usually paid a premium for the assumed deposits, decreasing the total resolution cost. Traditionally, the FDIC preferred a P&A transaction to a deposit payoff, as it was less disruptive to the community.

In a Deposit Payoff (also known as Payoff), as soon as the bank was closed by the chartering authority, FDIC was appointed the receiver and all insured depositors were paid the full amount of their claims. Uninsured depositors and other general creditors of the bank usually did not receive either immediate or full reimbursement on their claims; instead, they obtained receivership certificates which entitled their holders to a proportionate share of the net collections on the failed bank’s assets.

With Open Bank Assistance (OBA), the FDIC was allowed to directly assist an operating insured bank if the bank was in danger of closing and its continued operation was essential to maintain adequate banking services in the community. The FDIC could make loans to, purchase the assets of, or place deposits in the troubled bank. Under normal circumstances, banks were expected to repay the assistance loans.

In 1980, ten commercial banks failed; three of those were in Kansas. One bank received open bank assistance. The ten insured banks that failed had deposits of $219.9 million. In seven cases involving banks holding deposits of $202.7 million, the FDIC arranged a P&A transaction where a healthy bank, either new or existing, purchased selected assets of the failed bank and assumed its deposits. In three bank failures with aggregate deposits of $17.2 million, the FDIC paid off depositors up to the statutory limit ($40,000 prior to March 31, 1980, and $100,000 after that date).

On April 28, 1980, the FDIC, the Federal Reserve, and the OCC jointly announced a $500 million open bank assistance package to assure the viability and continued operation of First Pennsylvania Bank, N.A., (First Penn), a subsidiary of First Pennsylvania Corporation, Philadelphia, Pennsylvania. First Penn, with assets of $8 billion, was Philadelphia’s largest bank and the twenty-third largest in the nation. The assistance to First Penn was in the form of $500 million in five-year subordinated notes supplemented by a $1 billion bank line of credit through access to the Federal Reserve discount window.

A recent estimate of losses per transaction type is shown in Table 3-3.

Since the inception of the FDIC on January 1, 1934, until December 31, 1980, 568 insured banks3-13 were closed, with 3.9 million deposit accounts and total deposits of $6.2 billion. In meeting its responsibilities, the FDIC as insurer disbursed $5.7 billion, and as liquidator recovered $5.4 billion. The result was a net loss to the FDIC of $300 million since it began operations.

Of the 568 insured bank failures, 310 were deposit payoffs. While recoveries of uninsured portions of deposits varied, in the aggregate, 97.3 percent of total deposits in payoffs had been paid or made available as of the end of 1980.

At the beginning of 1980, the FDIC had $1.9 billion in assets from failed banks. The FDIC liquidated a little more than it acquired, ending the year with total failed bank assets with a book value of $1.8 billion. Those assets had an estimated recovery value of about $710 million.

In disposing of assets retained from failed banks, the FDIC converted the assets to cash as quickly as practical and strived to realize maximum recovery. With the recoveries, the FDIC first repaid the insurance fund the cash that had been advanced for the administrative costs. Remaining recoveries were distributed to the claimants of the receivership based on the priorities contemplated under the National Bank Act of 1864. Although the National Bank Act did not explicitly state the claims priorities, the FDIC interpreted the payment order to be as follows: 1) administrative expenses of the receiver, 2) deposit liabilities and general creditor claims, 3) subordinated debt claims, 4) federal income taxes, and 5) stockholder claims. Some states developed their own priorities which were different from the national law and the FDIC followed the state laws for state chartered institutions. In 1993, the National Depositor Preference Amendment was enacted which set the priorities for all state and federally chartered institutions. The National Depositor Preference Amendment is discussed later in Chapter 16—1993.

The FDIC adopted a workout strategy for dealing with acquired nonperforming loans. That strategy usually involved assigning delinquent loans to specific account officers, who would be responsible for negotiating repayment or settlement of the debts with borrowers. Frequently, litigation, foreclosure, and the sale of available collateral were necessary to achieve final debt resolution. That strategy was typical of the approach used by private and public entities in handling delinquent paper. Performing loans were warehoused and routinely serviced until final payoff by the borrower.

Table 3-4 shows the FDIC’s assets in liquidation and Chart 3-1 shows the asset mix. 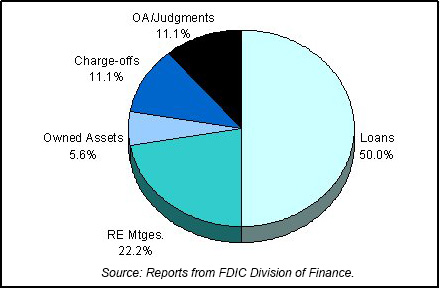 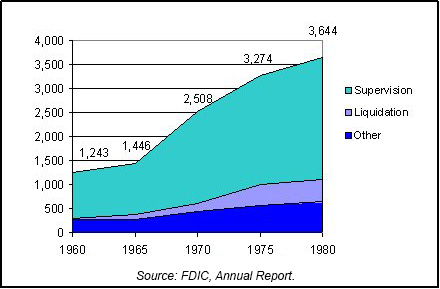