Chairman Donald E. Powell is quoted in the FDIC's 2001 Annual Report as stating, “We must be ready to meet the challenges of the future, and we are not there yet. I believe history will see 2001 as a setup year for the FDIC. We spent a lot of time working on initiatives that will bear fruit in 2002 and beyond.”

Includes two SAIF institution failures, one each in 2000 and 2001. Back to table
Losses for all resolutions occurring in this calendar year have been updated through 12/31/03. The loss amounts on open receiverships are routinely adjusted with updated information from new appraisals and asset sales, which ultimately affect projected recoveries.Back to table

Source: FDIC, 2001 Annual Report and Reports from FDIC Division of Finance and Division of Research and Statistics.

The FDIC Reacts to the September 11 Terrorist Attacks

The terrorist attacks against the United States on September 11, 2001, shook the country and the world. Among the fallout, the tragedy jolted business and consumer confidence, impairing economic activity in virtually every region of the country. The banking industry and others near “Ground Zero”?the site of the attacks on the World Trade Center towers in New York?responded with remarkable resiliency to maintain the continuity of the financial system. What many Americans do not know is how the FDIC and other bank regulatory agencies reacted during the crisis to ensure the continuity of their operations and the stability of the banking system.

With the evacuation of the New York Regional Office, located just six blocks from the World Trade Center, the FDIC faced significant operational challenges, yet contingency planning and interagency coordination enabled the FDIC to resume in a timely manner all of its crucial business in New York from two satellite offices in New Jersey. Interim contact information was posted on the FDIC's public Web site. The New York Regional Office reopened on September 17.

In the days and weeks following the attacks, the New York staff actively monitored the operational and financial condition of depository institutions in the region. FDIC headquarters staff, along with the other federal banking regulators and the state chartering authorities, monitored the attacks' impact on the banking system. Immediate concerns about the continued operations of affected institutions were constantly monitored, and senior officials at the regulatory agencies were briefed daily. Liquidity concerns nationwide were monitored through daily conference calls between the various regional offices of each of the agencies until the situation had stabilized and concerns had been mitigated. In conjunction with other bank regulators, the FDIC assessed the long-term impact of these events on the U.S. banking industry. The FDIC also issued supervisory guidance to the industry similar to guidance normally issued when natural disasters occur, and encouraged FDIC-supervised institutions to cooperate with law enforcement agencies in the investigation of terrorist activity.

Following the terrorist attacks, economists and financial analysts in the eight FDIC regional offices worked with their counterparts in Washington to stay abreast of regional and national economic developments and to evaluate their likely effects on the banking system. FDIC staff delivered a report to the FDIC Board of Directors on October 9 detailing the effects on the banking industry up to that time. A summary of that report was published in the FDIC's fourth quarter Regional Outlook. The third quarter 2001 edition of the FDIC's Quarterly Banking Profile, which provides a comprehensive analysis of banking industry statistics and trends, included the supplement “How the Banking Industry Has Responded to Crises.” This piece chronicled the history of bank performance indicators during previous historical periods of national and international crisis.

With the demise of the ?tech boom' and ?nine-eleven' the U.S. economy weathered a short lived recession with some corresponding significant downturn in certain economic factors. After enjoying four years of single digit rates, office vacancies spiked up almost 600 basis points to 14.2 percent. GDP dropped over 300 basis points to 3.2 percent. Unemployment moved up over 200 basis points to 6.1 percent overshadowing any overall job growth as total employment decreased by 1.1 percent, a net decrease of over 1.5 million jobs.

Government action put significant downward pressure on interest rates to respond. By the end of the year, the discount rate was down to 1.3 percent from a beginning rate of 6 percent. The prime rate was cut by almost 50 percent to 4.8 percent from 9.5 percent, and the 30-year mortgage rates started a modest decline of 0.3 percent to 7.1 percent. With other sectors not being as hard hit as technology combined with more favorable interest rates, housing starts were up 2.2 per cent at 1,602,700, existing home sales were up 3.5 percent, and there was a decrease in the inflation rate to 1.6 percent from 3.4 percent in 2000.24-1

Commercial and Industrial loans declined 6.6 percent. This can be attributed to more conservative lending patterns and a slower economy. Banks tended to shift assets away from loan/leases to government/agency securities (less risk involved in latter). Growth in commercial real estate loans was stronger, but was still slightly down from 2000. Loans to consumers (that were either held or securitized) grew 7.6 percent. Delinquency and charge-offs rose on credit card and other consumer loans caused by the increased economic uncertainty. Loan provisions rose, but were offset by gains in investment account securities.24-2

Overall, 9,632 financial institutions were in operation at the end of 2001. The number of banks on the problem bank list continued to grow and increased from 94 to 114.24-3

Table 24-2 shows the number and total assets of FDIC insured institutions, as well as their profitability as of the end of 2001

For the first time, the FDIC used the Internet to sell the deposits and assets of a failing institution. This process marks a significant departure from the FDIC's normal procedure of selling the assets and deposits of failing institutions by inviting several hundred potential bidders to a meeting location near the failing bank. Only those attending would then obtain the confidential information necessary to complete the bidding process. The Internet was used to market all four failures in 2001.

First Alliance Bank and Trust Company, Manchester, New Hampshire, with assets of $17.4 million, was the first failing bank to be marketed by the FDIC on the Internet. Interested parties were registered and given a unique password to gain access to a secure Web site containing the confidential bidding information and materials. Potential bidders avoided the time and expense of attending the bidders meeting and had immediate and around-the-clock access to information about the failing bank and the bidding process.

On July 27, 2001 the FDIC was named receiver of Superior Bank, FSB, Hinsdale, Illinois (Superior). Superior was closed and placed into receivership on very short notice, and therefore the FDIC had no opportunity to market the franchise prior to the failure. Therefore, simultaneous with its appointment as receiver, the FDIC transferred substantially all of Superior's assets and insured deposits to a newly chartered mutual savings bank operated under the FDIC's conservatorship powers. The conservatorship continued to maintain the depository base, the loan origination platform, and loan servicing operation in an attempt to maximize the value of each business line. While the operation of a conservatorship is not new to the FDIC, the Superior resolution represented the first time that this liquidation approach had been used for a SAIF-insured institution.

Ultimately, through the operation of the conservatorship the FDIC obtained a $52.4 million premium for the deposit franchise. The conservatorship produced positive results on the loan side as well. Prior to its failure, Superior had entered into forward loan commitments (loan sale agreements) with several brokerage firm investors under which Superior was to provide pools of residential mortgage loans, at specified dates in the future. As part of the effort to maintain the viability of Superior's loan origination and servicing operations, it was determined that the conservatorship would continue to generate loans to fulfill these commitments. During 2001, the conservatorship successfully completed the sale of almost 2,500 loans under the forward loan commitments, at an average sales price of 102.9 percent.

The FDIC also reached a settlement of the claims against the primary shareholders of Superior during 2001. The FDIC received $100 million in cash in December, and a note for an additional $360 million to be repaid over the next 15 years.

A more recent estimate of losses per transaction type is shown in Table 24-3.

In the four financial institutions that failed in 2001, deposits totaled $1.7 billion in 95,036 deposit accounts. Dividends paid on all active receiverships totaled almost $465 million in 2001.

There have been a total of 2,215 insured financial institution resolutions since the FDIC began operations in 1934. Of this total, 1,471 were PA transactions, 141 were open bank assistance transactions, and 603 were deposit payoff transactions.

Total disbursements by the FDIC since January 1, 1934, have amounted to $108.4 billion. Of that amount, actual and projected recoveries are anticipated to be approximately $70.3 billion, which equates to a projected loss of $38.1 billion to the BIF/SAIF funds.

At the beginning of 2001, the FDIC held $535.5 million in assets from failed institutions. That included $226.2 million was assets in liquidation for BIF, $8.1 million for SAIF, $28.3 million for the FSLIC Resolution Fund (FRF), and $272.9 million for the Resolution Trust Corporation (RTC). During the year, the FDIC acquired an additional $213.2 million in assets from four bank failures. Asset acquisitions would have been significantly greater if not for the fact that Superior Bank, which held almost $2 billion in assets at the time of failure, was operated as a conservatorship for almost one year, and the bulk of the assets were liquidated during the conservatorship. For accounting purposes, conservatorship activities are reflected separately from receivership activities. The FDIC collected $219 million during the year, and the ending balance for assets in liquidation was $573.4 million. Of the $573.4 million, $131.7 million was assets in liquidation for BIF, $233.6 million for RTC, $14.2 million for FRF, and $193.9 million for SAIF.

Asset marketing continued to play a key role in asset liquidations for the FDIC as their efforts contributed almost $35 million (2,100 loans sold) to the recoveries. However, asset marketing's most significant contribution during the year was its sale of 14,036 loans for the Superior conservatorship, which resulted in recoveries of over $72 million during the year attributed to the conservatorship.

The FDIC also had over $89 million in non-asset related collections during this year. While these collections came from a number of different sources, almost $28 million represented recoveries of state and federal tax benefits due to failed institutions, and another $28 million was the result of recoveries from fidelity bond insurance claims, director and professional liability settlements, and criminal restitutions. Table 24-4 shows the FDIC's assets in liquidation and Chart 24-1 shows the asset mix.

Table 23-4 shows the FDIC's assets in liquidation and Chart 23-1 shows the asset mix. 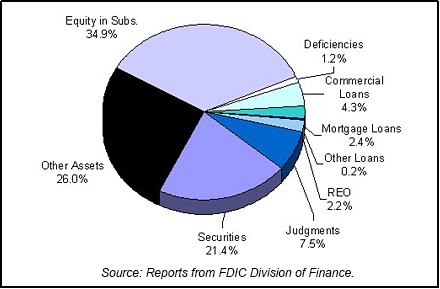 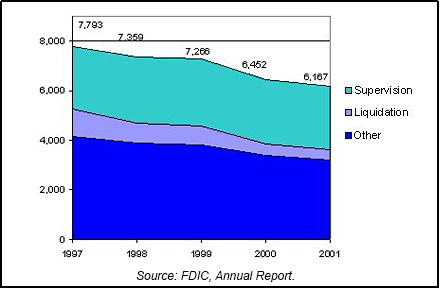 Staffing decreased by 285 (4.4 percent) during the year, down to 6,167 as the Corporation continued its efforts to match staffing with its declining workload.

Approximately one third of this decline was accomplished through the expiration of temporary and term appointments. Additionally, the Legal Division, the Office of Ombudsman, and the Office of Diversity and Economic Opportunity offered buyout opportunities to its staff members. Chart 24-2 shows the staffing levels for the past five years.