Includes one SAIF institution failure in 1999. Back to table
Losses for all resolutions occurring in this calendar year have been updated through 12/31/03. The loss amounts on open receiverships are routinely adjusted with updated information from new appraisals and asset sales, which ultimately affect projected recoveries. Back to table

Source: FDIC, 1999 Annual Report and Reports from FDIC Division of Finance and Division of Research and Statistics.

While the U.S. economy as a whole continued to steam forward throughout 1999, the breadth of prosperity was not as great as during 1998. On the bullish side, GDP growth climbed sharply once again, rising by 5.6 percent. Likewise, unemployment fell another 30 basis points to 4.1 percent, a very low level by historical standards. Moreover total employment, rose by 1.5 percent, as 1,857,000 more individuals found work. Also bullish was the inflation rate which added only a modest 2.7 percent to the average cost of goods and services. The final piece of bullish economic news came from a 3 percent increase in new housing starts, to 1,665,000.

There were record profits due to an increase in non-interest income, which was largely due to non-deposit fee income. The net interest margin remained constant at 4.1 percent. Most profitability was evident in medium to large size banks. The top ten banks held 35 percent of industry’s assets, and the next 90 also held 35 percent. The next 900 held 18 percent, and the remaining banks held 12 percent.

Total Loans expanded 8 percent. Commercial and Industrial loans expanded 8.1 percent, however this pace was slower than the past two years. Commercial real estate loans increased more than 15 percent; the greatest increase since 1987. The largest loan category increase was in construction and land development loans, which increased 27 percent. There were three main reasons for the strong increase commercial real estate loans: the strong economy, the decrease in REITs (which allowed private developers to develop), and the issuance of domestic securities backed by commercial mortgages was off 24 percent. Consumer loans grew 4.7 percent and home equity loans increased 5.9 percent.

Table 22-2 shows the number and total assets of FDIC insured institutions, as well as their profitability as of the end of 1999.

The First National Bank of Keystone, Keystone, West Virginia, was closed on September 1, 1999, by the Office of the Comptroller of the Currency. The bank?s failure was the result of fraudulent activities involving $515 million in loans carried on the bank?s books that should have been removed after they were securitized and sold, along with embezzlement and excessive compensation in the form of fees and commissions. The bank reported total assets of just over $1 billion and total liabilities of $976.4 million. On September 3, 1999, the FDIC and AmeriBank, Inc., Welch, West Virginia, reached an agreement whereby AmeriBank would assume the insured local deposits totaling $135 million and purchase $74.2 million in assets for a discount of $105,000. The FDIC paid out the non-local insured deposits not assumed by AmeriBank. The uninsured deposits totaled approximately $27.9 million in about 674 accounts. The estimated total loss to the deposit insurance fund is $751 million.

A more recent estimate of losses per transaction type is shown in Table 22-3.

In the eight financial institutions that failed in 1999, deposits totaled $1.3 billion in 59,601 deposit accounts. Dividends paid on all active receiverships totaled almost $959 million in 1999.

There have been a total of 2,204 insured financial institution resolutions since the FDIC began operations in 1934. Of this total, 1,460 were P&A transactions, 141 were open bank assistance transactions, and 603 were deposit payoff transactions.

Total disbursements by the FDIC since January 1, 1934, have amounted to $108.1 billion. Of that amount, actual and projected recoveries are anticipated to be approximately $70.1 billion, which equates to a projected loss of $38 billion to the BIF/SAIF funds.

At the beginning of 1999, the FDIC held $2.4 billion in assets from failed institutions. That included $1.3 billion in BIF assets, $349 thousand in SAIF assets, $105 million in FSLIC Resolution Fund (FRF) assets, and $947 million in Resolution Trust Corporation (RTC) assets. During the year, the FDIC acquired an additional $1.5 billion in assets from seven bank failures and one thrift failure. The FDIC collected $980 million during the year, and the ending balance for assets in liquidation was $2 billion, a reduction of $394 million. Of the $2 billion, $1.5 billion was assets in liquidation for BIF, $10 million for SAIF, $42 million for FRF, and $467 million for RTC.

During 1999, the FDIC sold real estate properties for a total of $67 million, yielding a recovery of 83 percent of average appraised value. More than 16,976 loans and other assets totaling $567 million in book value were sold through asset marketing efforts. Table 22-4 shows the FDIC?s assets in liquidation and Chart 22-1 shows the asset mix.

Table 22-4 shows the FDIC's assets in liquidation and Chart 22-1 shows the asset mix. 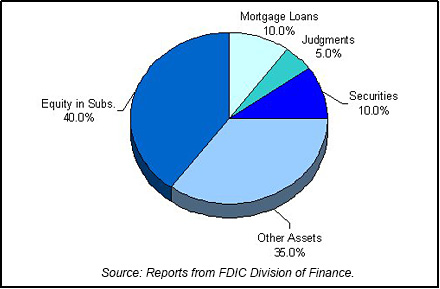 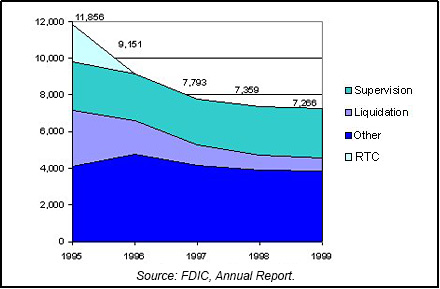 After reducing the size of its workforce by over 4,500 or 38.7 percent over the previous four years, staffing remained relatively constant during 1999, decreasing by only 93 (1.3 percent) down to 7,266. The Corporation continued its practicing of allowing temporary and term appointments to expire, which accounted for almost 50 percent of the staff reductions. Additionally, the Corporation utilized an Early Out Retirement authority, and the Legal Division offered a buyout opportunity in its continued efforts to remedy staffing imbalances. Chart 22-2 shows the staffing levels for the past five years.