The year 2000 may well be remembered as a watershed in the history of the FDIC. The Corporation undertook a comprehensive review of the deposit insurance system with an eye toward addressing its weaknesses.

Includes two SAIF institution failures, one each in 1999 and 2000. Back to table
Losses for all resolutions occurring in this calendar year have been updated through 12/31/03. The loss amounts on open receiverships are routinely adjusted with updated information from new appraisals and asset sales, which ultimately affect projected recoveries. Back to table

Source: FDIC, 2000 Annual Report and Reports from FDIC Division of Finance and Division of Research and Statistics.

The U.S. economy continued to set new records for the longevity of this peace-time expansion and the economy showed remarkable strength, as GDP grew by 6.5 percent. Unemployment reflected this hearty pace of economic activity, declining 10 basis points to a phenomenal 4 percent. Office vacancies fell by 100 basis points to 8.3 percent. Rounding out the year's positive economic news was a 48 basis-point decline in interest on 30-year mortgages, to 7.58 percent.

Fueled primarily by a sharp spike in both oil and natural gas prices, inflation rose to 3.5 percent, the highest level in several years—but nonetheless quite modest by historic standards. This inflation scare helped to prompt an increase of 100 basis points in the discount rate—from 5 percent to 6 percent. This shift toward tightening the discount rate may have contributed to the 4.4 percent decline in housing starts experienced during 2000. New home sales remained virtually consistent with the 1999 level, declining by an imperceptible 30 basis points.23-1

For most financial institutions, the returns on assets and equity fell during the year. Even though, the asset growth rate for commercial banks went from 5.4 percent to 8.8 percent. Commercial banks' total net income decreased 2 percent to $69.8 billion. The decline in profitability was due mainly to the continued narrowing of net interest margins, an increase in loan-loss provisions, and the slowed growth of non-interest income. Banks had a strong first quarter, but some institutions experienced large restructuring charges in the second quarter. A total of 605 banks reported negative income. However, this was down from 1999, which had 658 banks experiencing negative income. Holdings of securities expanded 6.4 percent; largely attributed to the increase in trading accounts. Growth of securities in investment accounts did not rise (due to the fact that holdings in U.S. Treasury securities had a record drop). Equity capital rose 10.5 percent.

Overall, loans expanded in 2000. Commercial and Industrial loans grew 12.9 percent during the first half of the year; but slowed to 2.9 percent during second half because of variety of reasons. On the demand side, there was a reduced need for credit. On the supply side, commercial banks tightened lending standards. The growth rate for commercial real estate loans slowed to 12.1 percent. Consumer loans rose by 8.7 percent and home equity loans increased by 24.6 percent.

Core deposits increased by 7.5 percent. This can partly be explained by the falling equity prices and economic uncertainty which increases the incentive to hold liquid bank assets. Managed liabilities expanded at a slower rate than the previous year (at 8.8 percent down from 15.5 percent pace in 1999). Over 70 percent of the industry assets were held by the top 100 largest banks. Fleet Bank and BankBoston combined to create the nation’s fourth largest bank (resulting in the 10 largest banks controlling 38 percent of assets).23-2

Table 23-2 shows the number and total assets of FDIC insured institutions, as well as their profitability as of the end of 1999.

In 2000, the FDIC conducted its first teleconference with prospective acquirers for a failed bank at five locations across the country. With the failure of Bank of Honolulu, Honolulu, Hawaii, it was not economically feasible to conduct an information meeting in Hawaii. Marketing specialists set up video teleconferences in San Francisco, Chicago, Dallas, New York and Washington, D. C., with the main presentation held in Dallas. The result was several competitive bids received and a successful resolution consummated.

A more recent estimate of losses per transaction type is shown in Table 23-3.

In the seven financial institutions that failed in 2000, deposits totaled $343.9 million in 39,250 deposit accounts. Dividends paid on all active receiverships totaled almost $1.7 billion in 2000.

There have been a total of 2,211 insured financial institution resolutions since the FDIC began operations in 1934. Of this total, 1,467 were PA transactions, 141 were open bank assistance transactions, and 603 were deposit payoff transactions.

Total disbursements by the FDIC since January 1, 1934, have amounted to $108.4 billion. Of that amount, actual and projected recoveries are anticipated to be approximately $70.3 billion, which equates to a projected loss of $38.1 billion to the BIF/SAIF funds.

At the beginning of 2000, the FDIC held $2 billion in assets from failed institutions. That included $1.5 billion in BIF assets, $10 million in SAIF assets, $42 million in FSLIC Resolution Fund (FRF) assets, and $467 million in Resolution Trust Corporation (RTC) assets. During the year, the FDIC acquired an additional $407.6 million in assets from six bank failures and one thrift failure. The FDIC collected $604 million during the year,23-4 and the ending balance for assets in liquidation was $535.5 million, a reduction of $1.4 billion. Of the $535 million, $226.2 million was assets in liquidation for BIF, $8.1 million for SAIF, $28.3 million for FRF, and $272.9 million for RTC.

During 2000, the FDIC sold real estate properties for a total of $15 million, yielding a recovery of 79 percent of average appraised value. More than 11,584 loans and other assets totaling $337 million in book value were sold through asset marketing efforts, with net sales proceeds during 2000 representing 132 percent of appraised value.

Asset Marketing conducted its first sale of financial assets over the Internet, with approximately $12.3 million of loans at a recovery that was 16 percent higher than expected.

Table 23-4 shows the FDIC's assets in liquidation and Chart 23-1 shows the asset mix. 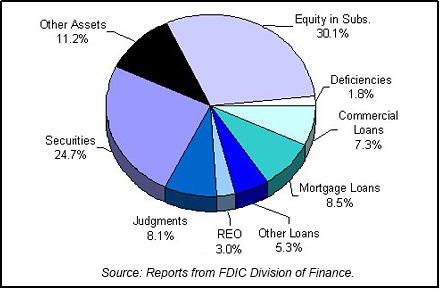 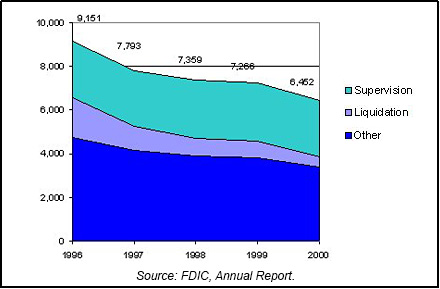 The BIF balance was $31 billion at year-end 2000, or 1.35 percent of estimated insured deposits. This was down from the year-end 1999 reserve ratio of 1.36 percent as the $1.6 billion growth of the fund's balance during 2000 was more than offset by the growth of insured deposits. The balance of the SAIF was $10.8 billion on December 31, 2000. SAIF-insured deposits were $753 billion at year-end 2000, having grown 5.8 percent for the year. The annual growth rate was the highest since the inception of the SAIF in 1989.

In an effort to keep pace with its declining workload, the Corporation reduced its staff by 814 (11.2 percent) during the year, down to 6,452. The reductions were accomplished largely through the Corporation's continuing practice of allowing temporary and term appointments to expire, which accounted for 63 percent of the decline. Most of the remaining decline was attributable to the closing of the DRR field site in Hartford, Connecticut during the year, leaving Dallas as the sole field site for the division. The Hartford office was originally scheduled to close prior to 2000, however the FDIC Board of Directors delayed the closing date until June 30, 2000, so that the Corporation would have an experienced staff available to respond to an unexpected increase in bank failures in early 2000, in the event of any Y2K technical issues. Chart 23-2 shows the staffing levels for the past five years.