The conditions in the industry—and the strength of the insurance funds—in 1998 gave the FDIC opportunity to focus on three corporate priorities: Year 2000 readiness; emerging risks facing insured institutions, and, therefore, the insurance funds; and diversity in the workforce. Each in its way contributed to the efforts to ensure that the FDIC remains the world's leading deposit insurance authority.

Losses for all resolutions occurring in this calendar year have been updated through 12/31/03. The loss amounts on open receiverships are routinely adjusted with updated information from new appraisals and asset sales, which ultimately affect projected recoveries.Back to table

Source: FDIC, 1998 Annual Report and Reports from FDIC Division of Finance and Division of Research and Statistics.

The U.S. economy continued to speed along during 1998, registering a 5.6 percent expansion in GDP growth. Unemployment declined another 30 basis points to 4.4 percent and the actual count of employed persons rose 1.4 percent to 132,581,000. Inflation remained tame, as the cost of living advanced by a modest 1.7 percent. Encouraged by the low inflation rate, the discount rate was lowered by 50 basis points to 4.5 percent. Remarkably similar was the decline in interest rates on 30-year mortgages which fell by 49 basis points to 7.02 percent. Given this rather idyllic environment, both new home sales (up 10.2 percent) and new housing starts (up 9.7 percent) rose sharply. Office vacancy rates fell another 100 basis points to 8.7 percent, as all aspects of the economy did well.21-1

The commercial banking industry faired well, but not as well as in previous years. Both returns on assets and equity were down, 5 basis points, and 75 basis points, respectively. There was a decline in rates earned on interest-bearing assets. In 1998, 5.8 percent of all commercial banks reported net losses; compared to 4.9 percent in 1997.

Commercial bank earnings totaled $61.5 billion; an increase of 3.9 percent or $2.3 billion from 1997. Bank assets grew by 8.25 percent. Security holdings rose 8.33 percent. Bank equity grew 9.5 percent. Net-interest income declined 15 basis points. The net interest margin also declined to a level not seen in seven years. There were two main reasons attributed to the decline: a shift in bank assets away from high-yielding assets, and a shift in bank sources of funding toward more expensive liabilities. Non-interest income as a percentage of assets rose 18 basis points. Non-interest expense rose due to merger and restructuring charges, increases in data processing services, and a rise in wage/occupancy costs.

Overall, loans increased 9 percent. Commercial and Industrial loans expanded by 13 percent and commercial real estate loans rose 11.3 percent, which can be attributed to continuing strong conditions in the property market (especially in the office sector). Loans to consumers expanded by 1 percent.

At end of 1998, there were 10,489 financial institutions in the United States and 84 institutions on the problem bank list.21-3

Table 21-2 shows the number and total assets of FDIC insured institutions, as well as their profitability as of the end of 1998.

During 1998, the FDIC resolved three BIF-insured institutions that failed. OmniBank, River Rouge, Michigan, with a total of $42 million in assets, was closed on April 9. The majority of the bank's assets and all of the deposits were acquired under a “loss-share agreement.” Q Bank, Fort Benton, Montana, with total assets of $15 million, was closed on August 7. The failed bank's insured deposits and some assets were acquired by an assuming bank.

The most notable failure in 1998 was the BestBank, Boulder, Colorado. BestBank with total assets of $233.2 million and total liabilities of $206.3 million, was closed July 23, 1998, by the Colorado State Bank Commissioner. Losses associated with pursuing subprime credit card customers through an allegedly fraudulent telemarketing travel club program caused the bank's failure. The bank pursued rapid growth in subprime credit cards funded primarily by out-of-territory time deposits. In addition, there was evidence of significant alleged fraud by the credit card marketer posting internally generated credits on 40 to 50 percent of the credit card accounts. The principal of BestBank was arrested based on a 46-count Federal grand jury indictment of bank fraud, wire fraud, and money laundering from a Denver, Colorado court. The estimated total loss to the deposit insurance fund is $223 million.

A more recent estimate of losses per transaction type is shown in Table 21-3.

Total disbursements by the FDIC since January 1, 1934, have amounted to $106.9 billion. Of that amount, actual and projected recoveries are anticipated to be approximately $69.8 billion, which equates to a cumulative projected loss of $37.1 billion to the BIF/SAIF funds.

At the beginning of 1998, the FDIC held $4.1 billion in assets from failed institutions. That included $1.7 billion in BIF assets, $17 million in SAIF assets, $169 million in FSLIC Resolution Fund (FRF) assets, and $2.2 billion in Resolution Trust Corporation (RTC) assets. During the year, the FDIC acquired an additional $370 million in assets from three bank failures and $17 million from the establishment of a FRF receivership related to the closeout of a previous FRF agreement. The FDIC collected $3.5 billion during the year,21-4 and the ending balance for assets in liquidation was $2.4 billion, a reduction of $1.7 billion. Of the $2.4 billion, $1.3 billion was assets in liquidation for BIF, $349 thousand for SAIF, $105 million for FRF, and $947 million for RTC.
During 1998, FDIC sold real estate properties for a total of $149 million, yielding a recovery of 89 percent of average appraised value. More than 6,545 loans and other assets totaling $335 million in book value were sold through asset marketing efforts.

Table 21-4 shows the FDIC's assets in liquidation and Chart 21-1 shows the asset mix. 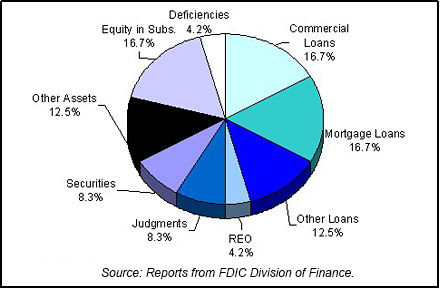 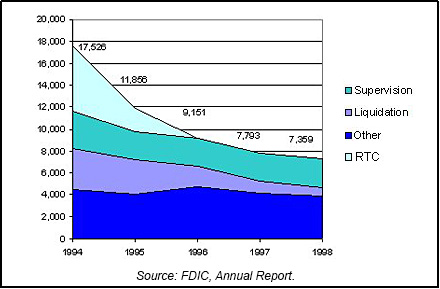 With banks experiencing another highly profitable year and only three bank failures, 1998 was another positive year for the BIF. The BIF continued to grow steadily and stood at $29.6 billion at year-end 1998. The 1998 fund balance represents a 4.7 percent increase over the 1997 balance of $28.3 billion. BIF-insured deposits grew by 4.1 percent in 1998, yielding a reserve ratio of 1.38 percent of insured deposits at year-end 1998, unchanged from year-end 1997.

The SAIF ended 1998 with a fund balance of $9.8 billion, a 5 percent increase over the year-end 1997 balance of $9.4 billion. Estimated insured deposits increased by 2.8 percent in 1998. During the year, the reserve ratio of the SAIF grew from 1.36 percent of insured deposits to 1.39 percent. More than 95 percent of BIF members and 90 percent of SAIF members paid no deposit insurance premiums for the first half of 1998.

The Corporation continued to reduce the size of its workforce in 1998 to levels consistent with its declining resolutions and liquidation workload. Total FDIC staffing decreased to 7,359 at year-end 1998, down 5.6 percent from year-end 1997. Staffing reductions were primarily due to further declines in the inventory of assets in liquidation and related workload. They were accomplished largely through the expiration of non-permanent appointments and by consolidating field operations. Chart 21-2 shows the staffing levels for the past five years.

In accordance with a 1996 plan for a phased consolidation of its field operations, the Division of Resolutions and Receiverships (DRR) in 1998 closed field offices in Irvine, California; Jersey City, New Jersey; and Boston, Massachusetts; and consolidated the residual workload from those sites into the Dallas and Washington offices. Only the Hartford, Connecticut office remained to be closed under DRR's 1996 field consolidation plan. In December 1998, the FDIC Board of Directors delayed the Hartford office's projected closing date until June 30, 2000. This allowed the Corporation to retain a large number of experienced staff as part of a contingent workforce ready to respond to any unexpected increase in bank failures in early 2000 due to Y2K technical issues. The Division of Supervision also continued to streamline its field office structure in 1998 by closing small field offices in Bath, Ohio; Cincinnati, Ohio; Macon, Georgia; and Fort Wayne, Indiana.