This number includes $40 billion from Continental. If Continental's assets were excluded, the dollar amount would be $3.4 billion and the percentage change would be -51.67 percent. Back to table

Source: FDIC, 1984 Annual Report and Reports from FDIC Division of Finance and Division of Research and Statistics.

The single biggest event of the year was the rescue of Continental Illinois National Bank and Trust Company (Continental), Chicago, Illinois. Having suffered large losses resulting from loans purchased from the failed Penn Square Bank, N.A., Oklahoma City, Oklahoma, Continental experienced severe financial difficulties throughout 1983. A permanent assistance plan put together by the FDIC required certain top management changes with multi-tier corporate restructuring, included the sale to the FDIC of problem loans with a face value of $5.1 billion for a price of $4.5 billion and a capital infusion from the FDIC of $1 billion in return for two permanent, nonvoting preferred stock issues.

In 1984, Gross Domestic Product (GDP) growth continued to increase as did employment growth. GDP was up 6.8 percent over the year, and employment increased by 5 percent.7-1 The unemployment rate dropped to 7.5 percent.7-2 Inflation also was down,7-3 but interest rates increased slightly. The discount rate was 8.8 percent, and the 30-year mortgage rate was 13.9 percent.7-4 Over the year, home sales and housing starts increased, but not as rapidly as in 1983. Sales were up 4.5 percent, and housing starts increased 2.7 percent. Continued commercial lending was pushing up the office vacancy rate to 14.6 percent for the year.7-5

The number of newly chartered banks reached a peak, with 402 institutions chartered in 1984. Despite the problems with the agricultural banks, 180 new banks were chartered in the Southwest alone in 1984. Many of those charters had a high concentration of Commercial and Industrial loans. The Southwest continued to experience problems in the agricultural and oil sectors, and regional banks were beginning to experience problems stemming from those faltering industries. The real estate market in the Southwest, however, was still healthy, and the value of commercial real estate permits rose 8 percent over the year.7-7 Much of the money from the profitable oil industry of the late 1970s and early 1980s was being invested in real estate development by those who believed that oil prices would rise again in the near future. Across the region there was a large increase in commercial real estate loans, totaling almost 8 percent of total assets, well above the national median of just under 5 percent.

The Northeast was still seeing high employment and high Gross State Product growth rates.7-8 A regional four-year boom in housing prices began with Boston residential real estate prices up 21 percent over the year.7-9 The housing price boom was coupled with a substantial increase in personal income during the same period.7-10 The conversion rate of mutual savings banks to the stock form of ownership started increasing dramatically. Those banks had strong incentives to expand loan portfolios rapidly in order to leverage high initial capital positions, increase earnings per share, and meet stockholders’ expectations.

Table 7-2 shows the number and total assets of FDIC insured institutions, as well as their profitability as of the end of 1984.

There were 78 commercial bank failures in 1984 ? the largest number of insured bank failures in any year since the FDIC was founded. There also was one assisted merger of a mutual savings bank and one assisted merger of a commercial bank. Tennessee alone experienced 11 bank failures. Three of those banks were part of the chain controlled by Jake and C.H. Butcher, Jr. A total of eleven banks controlled by the Butchers failed during 1983 and 1984.

A recent estimate of losses per transaction type is shown in Table 7-3.

Of the 748 banks7-11 that failed since the FDIC’s inception in 1934, P&A transactions and assistance agreements were used for 404 failures, and deposit payoffs were used to resolve another 344 banks, including 14 IDTs. Since January 1, 1934, 800,000 depositors with total deposits of $2 billion were involved in payoff cases.

At the beginning of 1984, the FDIC held $4.3 billion in assets from failed banks. There were 78 bank failures in 1984, with total assets of $2.9 billion. The FDIC?s inventory of assets in liquidation in 1984, exclusive of assets of Continental, climbed to 121,000 assets with a book value of $5.2 billion. The FDIC acquired approximately 800 assets from Continental with a book value of $5.1 billion. Combined total assets for liquidation at the end of 1984 were $10.3 billion, which represented an increase of more than double the amount of assets held at the beginning of the year.

During the mid-1980s, the FDIC?s asset marketing efforts were focused on performing loans of all types and sizes; particularly those collateralized by real estate. As the workload increased, the FDIC?s efforts began to focus on the sale of nonperforming loans, particularly those with small balances. That occurred for several reasons. In many cases, smaller loans were as time-consuming to work as loans with much higher book values and greater sources of recovery to the FDIC. Although small loans made up the vast majority of the loans held by the FDIC, their total value represented a small fraction of the value of receivership portfolios. By accelerating the disposition of those small loans, FDIC account officers were able to focus on larger credits that offered higher recovery levels. Table 7-4 shows the FDIC?s assets in liquidation and Chart 7-1 shows the asset mix. 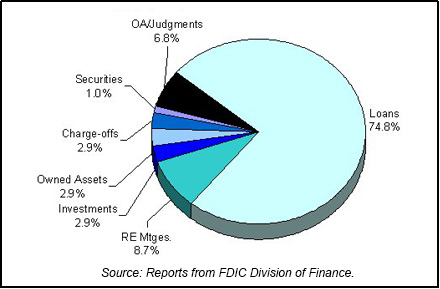 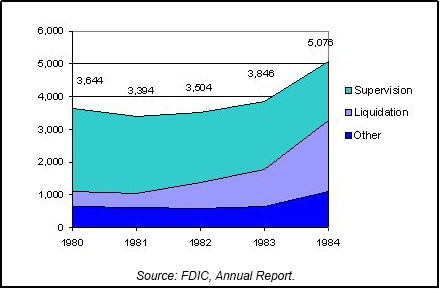 Revenues and the insurance fund increased during 1984 despite a record number of bank failures. Revenues included $1.5 billion on investments and U.S. Treasury obligations and $1.3 billion in assessments from insured banks. The fund reached a new high of $16.5 billion, an increase of $1.1 billion over 1983. That was an increase of 7.1 percent. Total gross expenses and losses for 1984 were $1.3 billion.

In 1984, thrift industry growth reached a peak as the number of insured thrifts grew 20 percent, compared with 4 percent growth for commercial banks. Arizona, Texas, and California led the industry with growth rates of 47 percent, 38 percent, and 30 percent, respectively. Generally, individual thrifts that experienced rapid growth were expanding with greater risk assets (commercial real estate loans, land loans, and direct equity investments), while simultaneously relying on more costly and volatile funding sources (large time deposits, repurchase agreements, and other liabilities). The peak number of thrifts converting from mutual to stock ownership also occurred in 1984. Overall, the Federal Home Loan Bank Board encouraged such conversions, which were considered one way of bringing in new capital to the industry.

The Federal Savings and Loan Insurance Corporation (FSLIC) also was busy in 1984 handling troubled thrift institutions. Two methods of resolution used were the Assisted Merger and the Supervisory Merger. By the end of 1984, 9 liquidations and 13 Assisted Mergers had occurred, costing FSLIC a total of $743 million. There were also 14 Supervisory Mergers, and the FSLIC fund balance stood at $5.6 billion.

The Assisted Merger was the most popular form of FSLIC resolution, since it deferred FSLIC cash payments. An acquirer would assume all (or nearly all) the assets and liabilities of a failed thrift and would receive assistance from FSLIC. Major components of assistance included capital loss coverage and yield maintenance on troubled assets. In a Supervisory Merger, supervisory authorities would encourage a weak thrift to merge with a healthier thrift, with no direct financial assistance from FSLIC.