Chairman Ricki Helfer stated in the 1995 Annual Report, “For three generations of Americans, federal deposit insurance ? with the full faith and credit backing of the U.S. government – has provided a reason for unconditional faith in the banking system. It is a certainty in an uncertain world. The FDIC will continue to make sure that faith in the banking system is justified.”

Losses for all resolutions occurring in this calendar year have been updated through 12/31/03. The loss amounts on open receiverships are routinely adjusted with updated information from new appraisals and asset sales, which ultimately affect projected recoveries.Back to table
This line item, starting in 1995, includes bank and savings associations. Back to table

Source: FDIC, 1995 Annual Report and Reports from FDIC Division of Finance and Division of Research and Statistics.

Inflation was meager at 2.5 percent, and the interest rate environment was mixed. The discount rate rose 50 basis points from 4.75 percent to 5.25 percent, while 30-year mortgage rates fell by 202 basis points from 9.53 percent to 7.51 percent. Because new housing starts during the previous year totaled more than twice the number of new homes sold, home builders backed off in new starts from the 1994 level. While home builders paused a briefly to allow demand to catch up to supply, office space demand actually increased, producing a 140 basis-point drop in the vacancy rate from 15 percent to 13.6 percent.

Commercial bank assets increased by 8 percent. Equity capital also grew $37.5 billion or 12 percent. Non-interest income increased by $6.2 billion, or 10.6 percent, reflecting strong growth in fee income. Non-interest expense increased only 4.5 percent. This can be attributed to the improvement in operating efficiency which was largely due to decreases in employee costs and occupancy costs relative to total revenue.

Commercial and Industrial loans experienced their largest increase in the last 15 years. In addition, commercial real estate loans increased by 5.75 percent. Consumer loans and consumer debt also increased. The increase in both of these areas is related to the rise in credit card use. Credit cards were becoming more accepted by consumers in ‘nontraditional’ places, such as the grocery store.

Banks depended on managed liabilities as a source to fund asset growth. Previously, banks used borrowings from abroad. However, because of the decrease in deposit insurance premiums, banks were able to use large time deposits as source of funds for the first time. Core deposits became significant source of funds, which had previously been declining last year. Savings accounts rose due to the establishment of ‘sweep accounts.’ 18-2

Table 18-2 shows the number and total assets of FDIC insured institutions, as well as their profitability as of the end of 1995.

A recent estimate of losses per transaction type is shown in Table 18-3.

Losses for all resolutions occurring in this calendar year have been updated through 12/31/03. The loss amounts on open receiverships are adjusted with updated information from new appraisals and asset sales, which ultimately affect projected recoveries. Back to table

In the six financial institutions that failed in 1995, deposits totaled $776.4 million in 47,651 deposit accounts. Dividends paid on all active receiverships totaled over $3.9 billion in 1995.

There have been a total of 2,127 18-5 insured financial institution resolutions since the FDIC began operations in 1934. Of this total, 1,445 were P&A transactions, 79 were open bank assistance transactions, and 603 were deposit payoff transactions.

Total disbursements by the FDIC since January 1, 1934, have amounted to $104.3 billion. Of that amount, actual and projected recoveries are anticipated to be approximately $67.4 billion, which equates to a projected loss of $36.9 billion to the BIF fund.

At the beginning of 1995, the FDIC held $16.7 billion in assets from failed institutions, and acquired some $550 million in assets from the six financial institutions that failed during the year. The FDIC successfully collected, sold, or otherwise resolved 40 percent, or almost $7 billion, of its asset inventory during the year. This included 2,687 real estate properties which were sold for $573.3 million, representing 94.3 percent of their appraised value. Also included were over 23,750 loans and other assets totaling $2 billion that were sold in sealed-bid and other asset marketing events, resulting in sales proceeds of 97.7 percent of the appraised value of these assets. At year-end 1995, the FDIC held $10.3 billion in assets for liquidation. That included $8.8 billion in BIF assets, $6 million in SAIF assets, and $1.5 billion in FRF assets.

Other financial recoveries during the year included $252 million from professional liability settlements or judgments, and $7.6 million in collections from court-ordered restitution from individuals convicted of bank fraud. Table 18-4 shows the FDIC's assets in liquidation and Chart 18-1 shows the asset mix.

Table 18-4 shows the FDIC's assets in liquidation and Chart 18-1 shows the asset mix. 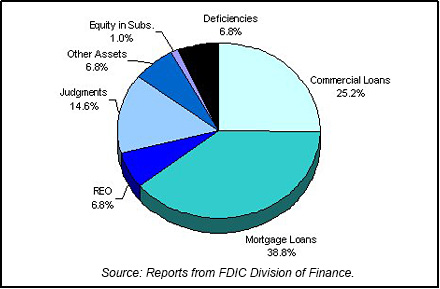 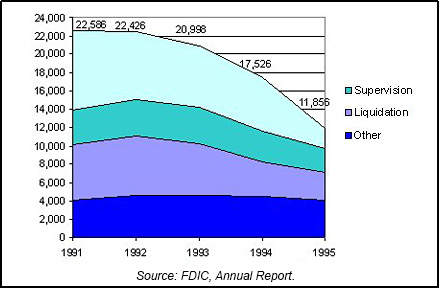 With the continuing recovery of the banking industry and institution's earnings at record levels, 1995 was another positive year for the BIF. The BIF grew to a record high of $25.5 billion at the close of 1995, which represented a 16.5 percent increase from the year-end 1994 balance of $21.8 billion. The BIF was in the strongest position it had experienced since 1971, which was the last time the bank deposit insurance fund exceeded 1.25 percent of insured deposits. The SAIF grew to a balance of $3.4 billion at year-end, which represented a 73.4 percent increase over year-end 1994.

In November, senior management announced a two-phased buyout program for career FDIC and RTC employees with incentives either to retire or voluntarily resign. Employees in the first phase were eligible to leave by year-end, and more than 300 accepted. Employees in the second phase began leaving during the first quarter of 1996 through the third quarter of 1997. For both phases, 940 employees accepted the buyout offer.

At year-end, the FDIC had 9,789 employees (RTC employees totaled 2,067), down approximately 16 percent from year-end 1994 and 37 percent below the peak level in the second quarter of 1993. These figures reflect the continuing decline in agency workload from bank failures. Total staffing including the RTC employees equaled 11,856. Chart 18-2 shows the staffing levels for the past five years.

Thrifts placed into the ARP program are included for clarity, although they were never placed into the conservatorship program. Back to table
Losses for all resolutions occurring in this calendar year have been updated through 12/31/95. The loss amounts are routinely adjusted with updated information from new appraisals and asset sales, which ultimately affect projected recoveries. Back to table

The RTC ceased operations on December 31, 1995, and transferred all employees, remaining assets, liabilities, and responsibilities to the FDIC. During its lifetime, the RTC resolved 747 thrift institutions, including 706 conservatorships. Since its inception through December 31, 1995, the RTC had disposed of assets with a book value of $455 billion, or nearly 98 percent of the approximately $465 billion (book value) in assets for which it had been responsible.

In 1995, the RTC resolved three thrifts. At the start of 1995, one thrift with total assets of $2.1 billion was in the RTC's conservatorship program. No new thrifts entered the program during 1995; and the one remaining thrift was subsequently resolved, leaving no thrifts in the conservatorship program at the end of 1995.

In 1995, all three thrift resolutions were purchase and assumption (P&A) transactions, and all deposits were transferred to the acquirers. The three thrifts had total assets of $1.7 billion.

Of the 747 insured thrift failures since the RTC began operations in August of 1989, 497 were P&A transactions, 92 were payoff transactions, and 158 were insured deposit transfers.

At the beginning of 1995, the RTC held $25 billion in assets from savings and loan associations in receivership and conservatorship. Assets acquired during the year through conservatorships, other resolved institutions, and putbacks or repurchases totaled $1.2 billion for the year. Losses and collections totaled $18.5 billion for the year. At the end of 1995, the RTC's remaining inventory of assets in liquidation totaled $7.7 billion.

Table 18-7 shows the RTC's assets in liquidation and Chart 18-3 shows the asset mix.

Memo Item: Assets transferred from conservatorship to receivership. Does not affect total of assets in liquidation.
Totals may not foot due to rounding differences. Back to table 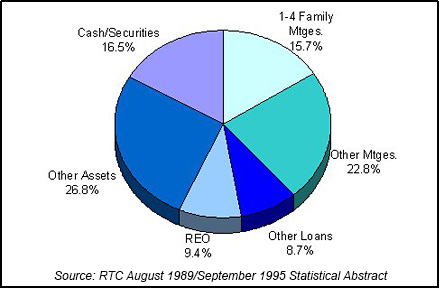