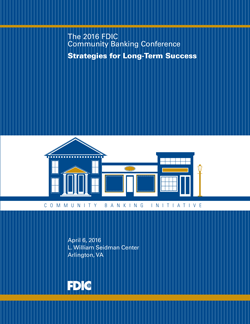 Letter from the Chairman

In the spring of 2016 the FDIC hosted a Community Banking Conference that explored key strategies for long-term success in the community banking sector. Given the vital role that community banks play in the U.S. financial system and economy, this conference marked an important step in understanding the challenges and opportunities community banks face. Read more.

On April 6, 2016, the FDIC hosted a Community Banking Conference in Arlington, Virginia, with the theme of exploring strategies for long-term success in the community banking sector. This important event drew about 250 community bankers and other industry participants, who took part in a daylong discussion about what the future holds for community banks in the United States.

FDIC Chairman Martin J. Gruenberg opened the conference with welcoming remarks that underscored the essential role community banks play in the U.S. economy. Chairman Gruenberg remarked that the community banking sector pulled through the financial crisis—and before that, decades of consolidation—as a steadfast pillar of the U.S. financial services industry. Drawing on FDIC research, he said that community banks today account for 13 percent of banking industry assets but hold 44 percent of the industry’s small loans to businesses and farms. In fact, for more than 20 percent of the nation’s 3,100 counties, the only banks operating in those counties are community banks. He drew the conclusion that these institutions therefore play a critical role in terms of access to basic banking services and credit for consumers, farms, and small businesses across the country.

Because community banks figure prominently in the U.S. financial system, they matter significantly to the FDIC. Chairman Gruenberg continued, “The FDIC is a lead federal supervisor for the majority of community banks in the United States, and the future of community banking has long been a priority for us.” He noted that “there is a very strong public interest in ensuring that they continue to function and serve their communities in the years ahead.” Community banks are entering this next phase in a strong position, outpacing the banking industry as a whole, both in the rate of earnings growth and the rate of loan growth.

“Community banks have evolved, changed, and grown to meet the needs of their customers and the challenges of the market,” he said. “They have succeeded to a remarkable degree.” While acknowledging that the economic recovery since 2009 has been marked by below-average growth and low interest rates—not an easy environment for community banks— Chairman Gruenberg also noted that the majority of community banks have nevertheless addressed problem loans, strengthened balance sheets, and increased earnings. In other words, on balance, community banks have a positive story to tell, but they also recognize the challenges ahead.

Following the Chairman’s remarks, four separate panels addressed some of those challenges: the viability of the community banking model, regulatory developments as they pertain to community banks, how technology is affecting these institutions, and how community banks are managing ownership structure and succession planning.

The strategies they mentioned included developing strong relationships with business customers and getting to know their products; taking advantage of the size of the community bank model to remain agile in acquiring assets; looking for innovative programs such as one bank’s tuition financing plan for private schools; providing bank employees with iPads when launching a mobile banking delivery channel; telling the bank’s story in schools to reach out to the next generation of customers and potential employees; embracing digital marketing as a cost-effective means of reaching customers; and consistently looking for opportunities that larger competitors are not interested in pursuing.

Doreen R. Eberley, Director of the FDIC’s Division of Risk Management Supervision, moderated the second panel, which focused on regulatory developments pertaining to community banks. Three regulators joined Director Eberley in a discussion about steps regulators are taking—independently and together—to reduce regulatory burden and enhance the supervisory process for community banks. Such actions include separate efforts by the FDIC, the Board of Governors of the Federal Reserve System, and the Office of the Comptroller of the Currency to minimize the time on-site during a bank examination.

The regulators also described how their agency’s joint participation in the second Economic Growth and Regulatory Paperwork Reduction Act of 1996 (EGRPRA) review has generated thoughtful comments from bankers about how to reduce regulatory burden. They mentioned the EGRPRA outreach events that all the regulators participated in and the efforts by each agency to address the regulatory burden concerns raised by community bankers and others through the EGRPRA process.

FDIC Vice Chairman Thomas M. Hoenig delivered a luncheon address on his proposal to reduce regulatory burden for traditional community banks. His remarks, entitled, “A Framework for Regulatory Relief,” included the Vice Chairman’s views on why there has been considerable industry consolidation over the last 30 years and how it could be addressed. The Vice Chairman went on to define what he considers to be a traditional community bank and an appropriate framework to provide regulatory relief for such banks.

Mark S. Moylan, Deputy Director of the FDIC’s Division of Risk Management Supervision, moderated a panel on the opportunities and risks of adopting new technologies. Three community bankers and an executive from a large technology service provider discussed a number of topics related to information technology, including how technologies have helped make their banks competitive, how technology figures into a bank’s strategic planning, and how to manage risks associated with technology. The community bankers detailed the types of high-tech services and products their banks are offering—everything from online and mobile banking to remote deposit capture. Technology is also enabling some banks to reduce the size and number of branch facilities, as well as the number of branch employees, while retaining the bank’s brand and giving customers a place to go to make deposits. Another advantage that technology offers is retaining customers who leave a bank’s community but remain loyal to their hometown bank. Emphasizing the importance of cyber security, the panel members described measures they are taking to protect bank information, from instituting employee education programs to informing customers of the need to protect their personal information.

The community bankers discussed ownership structures and offered several succession strategies. The bankers mentioned several ideas for developing the next generation of bank leaders and managers. Their practices include developing employees who joined the bank after graduating from high school by offering college tuition programs and sending the employees to graduate banking schools. Other strategies include providing formal internship and mentoring programs, rotating emerging leaders through 90-day assignments with executives, charting specific career paths to executive positions, and including emerging leaders in board meetings so they become comfortable participating in the discussions and making presentations. Finally, Professor Sorin M. Sorescu of Texas A&M University described an innovative program at his university that educates college students in commercial banking with an emphasis on community banking. The program was created in response to a request by Texas bankers who wanted to fill a perceived talent gap in the community banking industry.

Chairman Gruenberg brought the conference to a close by thanking all of the participants and noting that he had been impressed with the panels and the speakers. He affirmed the FDIC’s commitment to community banking and emphasized the importance of developing “a narrative for community banks that is understandable and engaging.” He also stressed the need to communicate the value of a career as a community banker.