"Although economic stress related to the COVID-19 pandemic continued to affect bank earnings, the industry has remained a source of strength for the economy. Banks of all sizes supported their customers and communities, including by originating more than $480 billion in Paycheck Protection Program loans in the second quarter." — FDIC Chairman Jelena McWilliams

WASHINGTON—The Federal Deposit Insurance Corporation (FDIC) today reported that commercial banks and savings institutions saw a decrease in net income of 70 percent from a year ago, while liquidity and capital levels remained very strong to meet loan demand and absorb any losses in the future.

For the 5,066 commercial banks and savings institutions insured by the FDIC, aggregate net income totaled $18.8 billion in second quarter 2020, down $43.7 billion (70.0 percent) from a year ago. The decline in net income is a continuation of uncertain economic conditions, which drove an increase in provision expenses. Financial results for second quarter 2020 are included in the FDIC’s latest Quarterly Banking Profile released today. 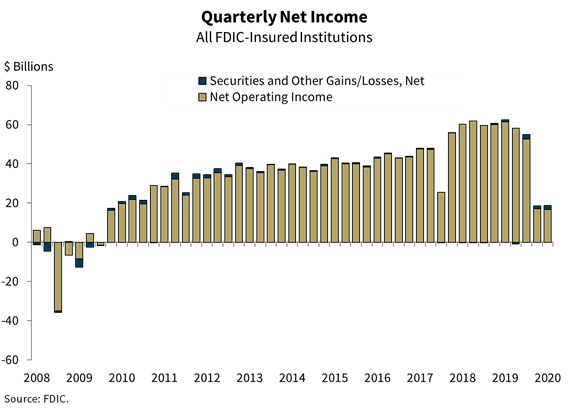 “Lower levels of business activity and consumer spending – combined with uncertainty about the path of the economy and the low interest-rate environment – contributed to higher provisions for loan and lease losses, as well as a decrease in net interest margins. Notwithstanding these disruptions, however, the banking industry maintained strong capital and liquidity levels at the end of the second quarter, which will protect against potential losses in the future,” McWilliams said.

Quarterly Net Income Declined by 70.0 Percent from a Year Ago: The decline in net income is primarily a result of an increase in provision expenses of $49.1 billion to $61.9 billion. Slightly less than half (47.5 percent) of all institutions reported annual declines in net income. The share of unprofitable institutions increased from a year ago to 5.4 percent. The average return on assets ratio fell from 1.38 percent in second quarter 2019 to 0.36 percent.

Community Banks Registered a 3.2 Percent Increase in Net Income Year-Over-Year: Reports from 4,624 FDIC-insured community banks reflect annual net income growth of $202.5 million. Despite a 273 percent increase in provision expenses to $2.4 billion and continued net interest margin compression, more than half of all community banks reported higher net income. This increase was primarily attributable to higher revenue from gains on the sale of loans (up $1.4 billion or 142.2 percent) and gains on the sale of securities (up $299.8 million or 130.7 percent). Community banks reported strong loan growth of 13.5 percent year-over-year, driven by lending activity related to the Paycheck Protection Program (PPP). The net interest margin for community banks compressed 17 basis points year-over-year to 3.51 percent, as the decline in average earning asset yields outpaced the decline in funding costs.

Loan and Lease Balances Increased on Quarterly and Annual Basis: Total loan and lease balances rose by $33.9 billion (0.3 percent) from the previous quarter. Quarterly results were mixed among the major loan categories. The commercial and industrial loan portfolio reported the largest quarterly dollar increase, up $146.5 billion (5.8 percent). Most of this growth was driven by the implementation of the PPP, as $482.2 billion in credit was extended by the banking industry to businesses. Conversely, consumer loans declined $67.1 billion due to reductions in credit card balances. Over the past 12 months, total loan and lease balances grew by 6.7 percent, slightly below the annual growth rate of 8 percent reported last quarter.

The Deposit Insurance Fund’s Reserve Ratio Declined to 1.30 Percent Due to Historic Insured Deposit Growth: The Deposit Insurance Fund balance totaled a record $114.7 billion in the second quarter, up $1.4 billion from the first quarter. The quarterly increase was led by assessment income. Due to an influx of more than $1 trillion of new deposits, however, the reserve ratio declined by 9 basis points from first quarter 2020 to 1.30 percent.

Mergers and New Bank Openings Continued in the Second Quarter: During the second quarter, one new bank opened, 47 institutions were absorbed through mergers, and one bank failed.