Good morning, and welcome to our release of second quarter 2020 performance results for FDIC-insured institutions.

Although economic stress related to the COVID-19 pandemic continued to affect bank earnings, the industry has remained a source of strength for the economy. Banks of all sizes supported their customers and communities, including by originating more than $480 billion in Small Business Administration-guaranteed Paycheck Protection Program (PPP) loans in the second quarter.

Nevertheless, lower levels of business activity and consumer spending – combined with uncertainty about the path of the economy and the low interest-rate environment – contributed to higher provisions for loan and lease losses, as well as a decrease in net interest margins. Notwithstanding these disruptions, however, the banking industry maintained strong capital and liquidity levels at the end of the second quarter, which will protect against potential losses in the future.

As individuals and businesses sought safety during the uncertain economic environment, banks experienced their second consecutive quarter of over $1 trillion in new deposits, increases that far exceed any deposit growth the FDIC has seen in the past. These inflows demonstrate public confidence in the banking system, as well as the system’s ability to accommodate unprecedented customer demand. However, this rapid growth has been so substantial that, despite a $1.4 billion increase in the Deposit Insurance Fund (DIF) – resulting in a record balance of $114.7 billion – the DIF reserve ratio fell from 1.39 percent in first quarter to 1.30 percent, which is below the required minimum level of 1.35 percent. I want to emphasize that the Fund has more money than at any time in the FDIC’s history, and the reduction in the reserve ratio was solely a result of the unprecedented increase in bank deposits. We believe deposit growth is likely to normalize in the upcoming quarters and for the reserve ratio to rise above 1.35 percent without any need to modify assessment rates in the near-term. As required by statute, the FDIC will publish additional analysis in the coming weeks.

Diane, I will now turn this over to you. Thank you. 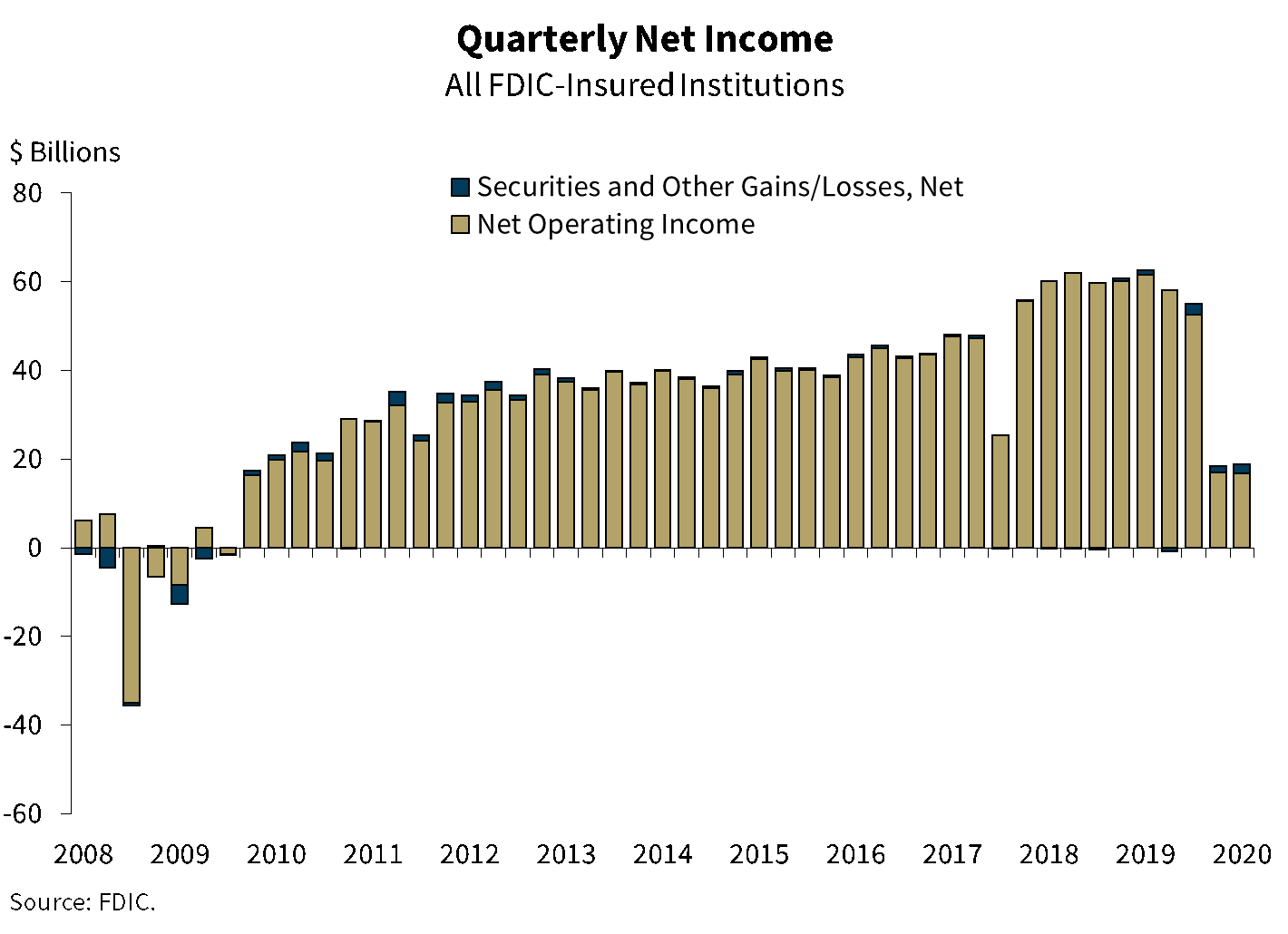 Our first chart shows that the banking industry reported quarterly net income of $18.8 billion during the second quarter, a 70 percent decline from one year ago. Slightly less than one-half of all banks reported annual declines in net income, and 5.4 percent of institutions were unprofitable. The industry’s return-on-assets ratio was 0.36 percent in the second quarter, down from 1.38 percent a year ago.

The decline in earnings was primarily the result of higher provision expenses. As a result of the continued economic uncertainty, provision expenses totaled $62 billion during the second quarter, an increase of 382 percent from one year ago. This high level of provisions is a continuation of first quarter trends when provisions totaled $53 billion.

Community banks reported quarterly net income of $6.6 billion in the second quarter, an increase of 3.2 percent from a year ago. While an increase in provision expense limited their profitability, gains on loan sales boosted overall community bank net income. 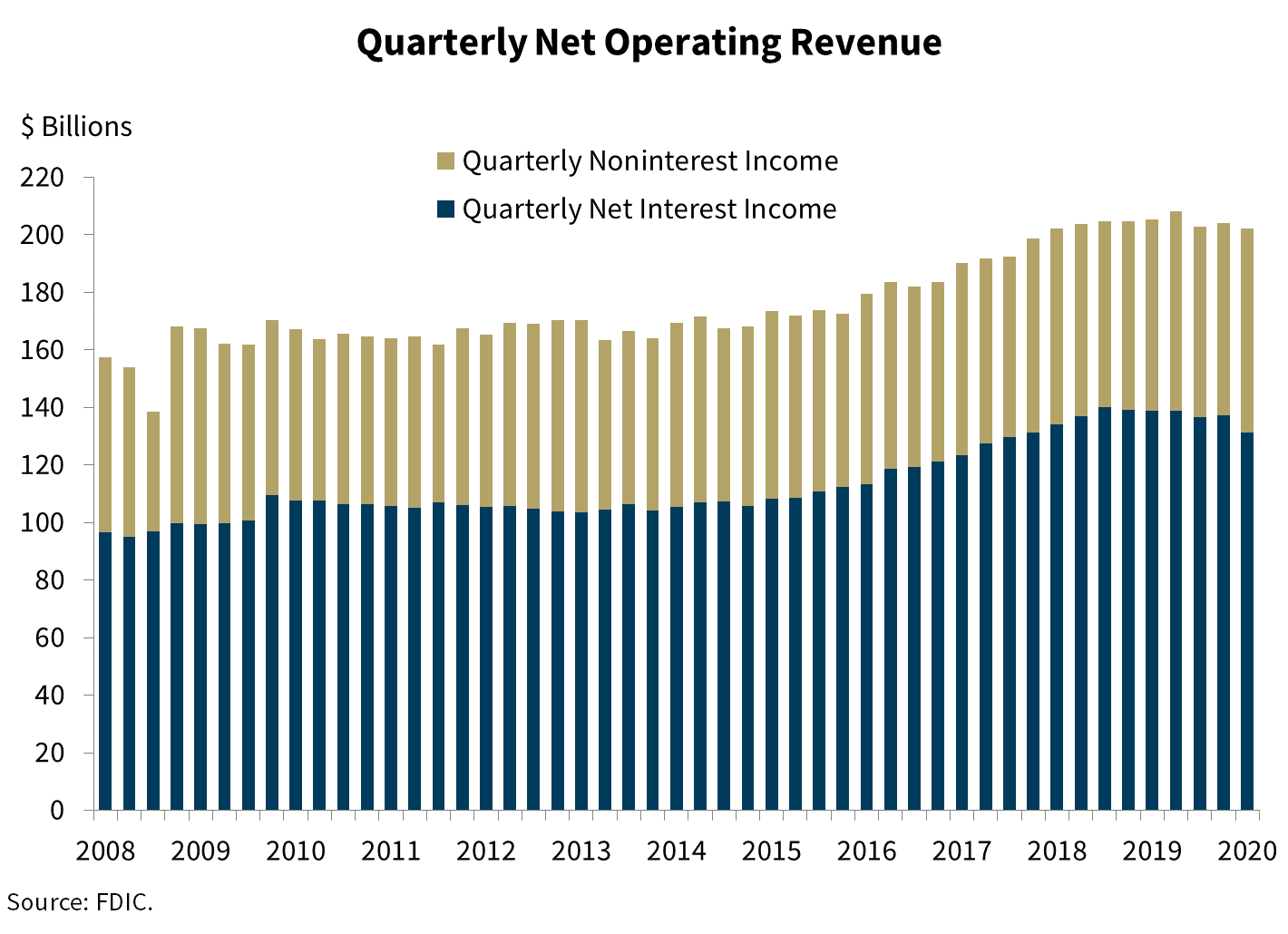 The next chart shows that net operating revenue remained relatively stable from one year ago at $202 billion. Net interest income declined for a third consecutive quarter, falling by 5.4 percent from a year ago. This reduction was partially offset by an increase in noninterest income due to higher trading income during the quarter. 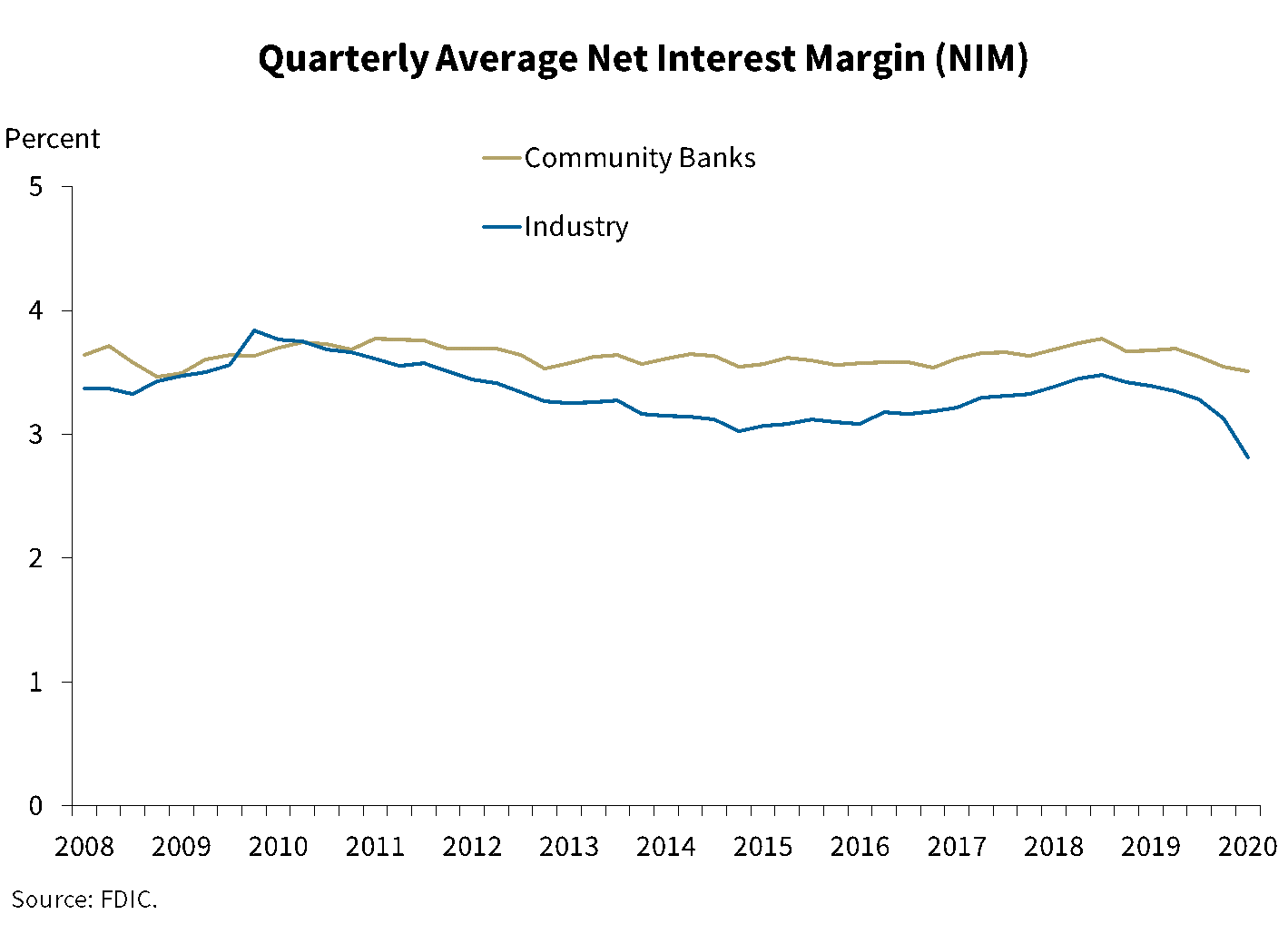 The low interest-rate environment is challenging for banks. Chart 3 shows that the average net interest margin for the industry declined 58 basis points to 2.81 percent in the second quarter, the lowest level ever reported in the Quarterly Banking Profile (QBP). The narrowing of the average net interest margin was broad-based, as it fell for banks of all size groups featured in the QBP. The decline was attributable to asset yields declining more rapidly than funding costs, as well as an increase in the volume of lower-yielding assets, such as balances due from depository institutions. 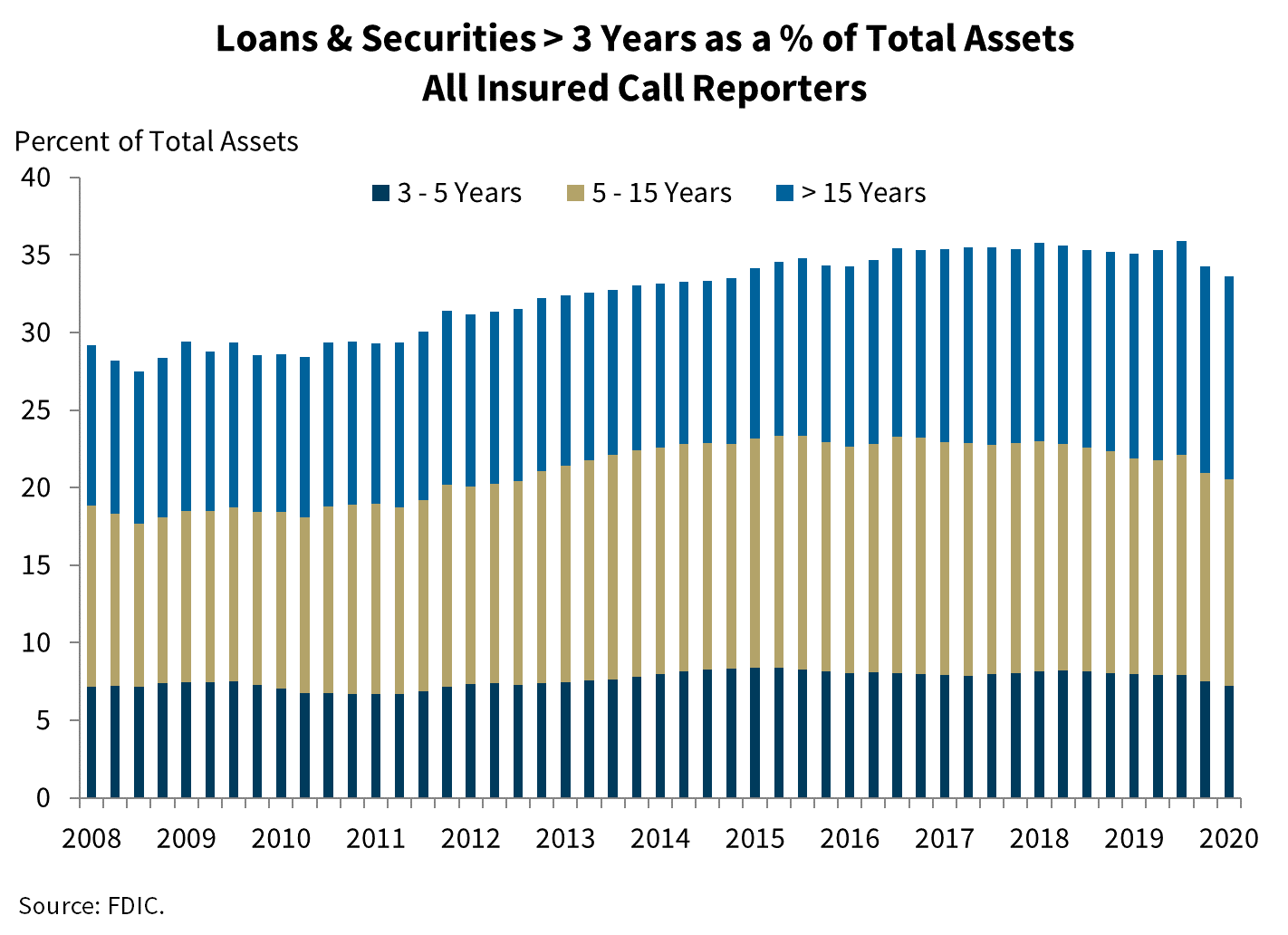 Chart 4 shows that the share of longer-term assets relative to total industry assets continued to decline from a recent high at year-end 2019. The decline was largely driven by the large volume of PPP loans, a vast majority of which have a two-year maturity. Despite this recent decline, more than one-third of industry assets still mature or reprice in three or more years. 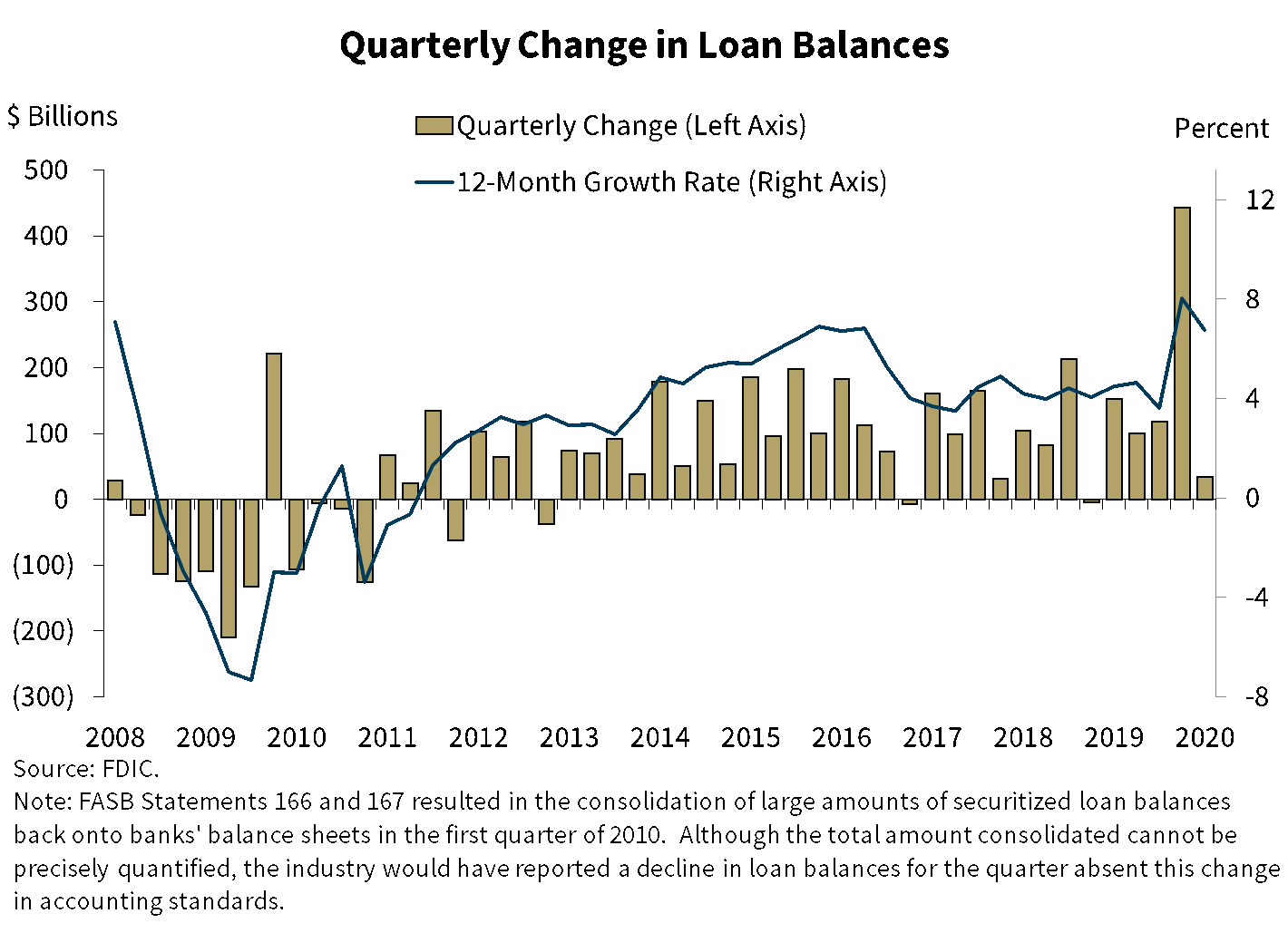 Chart 5 shows that loan balances rose by $33.9 billion, or 0.3 percent, during the second quarter. The annual loan growth rate for the last 12 months was 6.7 percent.

The quarterly results were mixed among the major loan categories. The commercial and industrial (C&I) loan portfolio reported the largest quarterly dollar increase of $146.5 billion. The implementation of the PPP in the second quarter drove this growth, with $482 billion in PPP loans on banks’ balance sheets at the end of the quarter. Consumer loans, on the other hand, declined by $67.1 billion during the quarter, driven by lower consumer spending and a decline in credit card loan balances.

Loan growth at community banks was stronger than the overall industry, with total loan volume rising by 13.5 percent from a year ago. The annual increase was led by growth in the C&I loan portfolio and community banks’ participation in the PPP. Community banks hold 31 percent of PPP loans, which significantly exceeds their 12 percent share of industry assets. Community bank C&I loans increased $143.1 billion, or 69.6 percent, in the second quarter, from one year earlier. 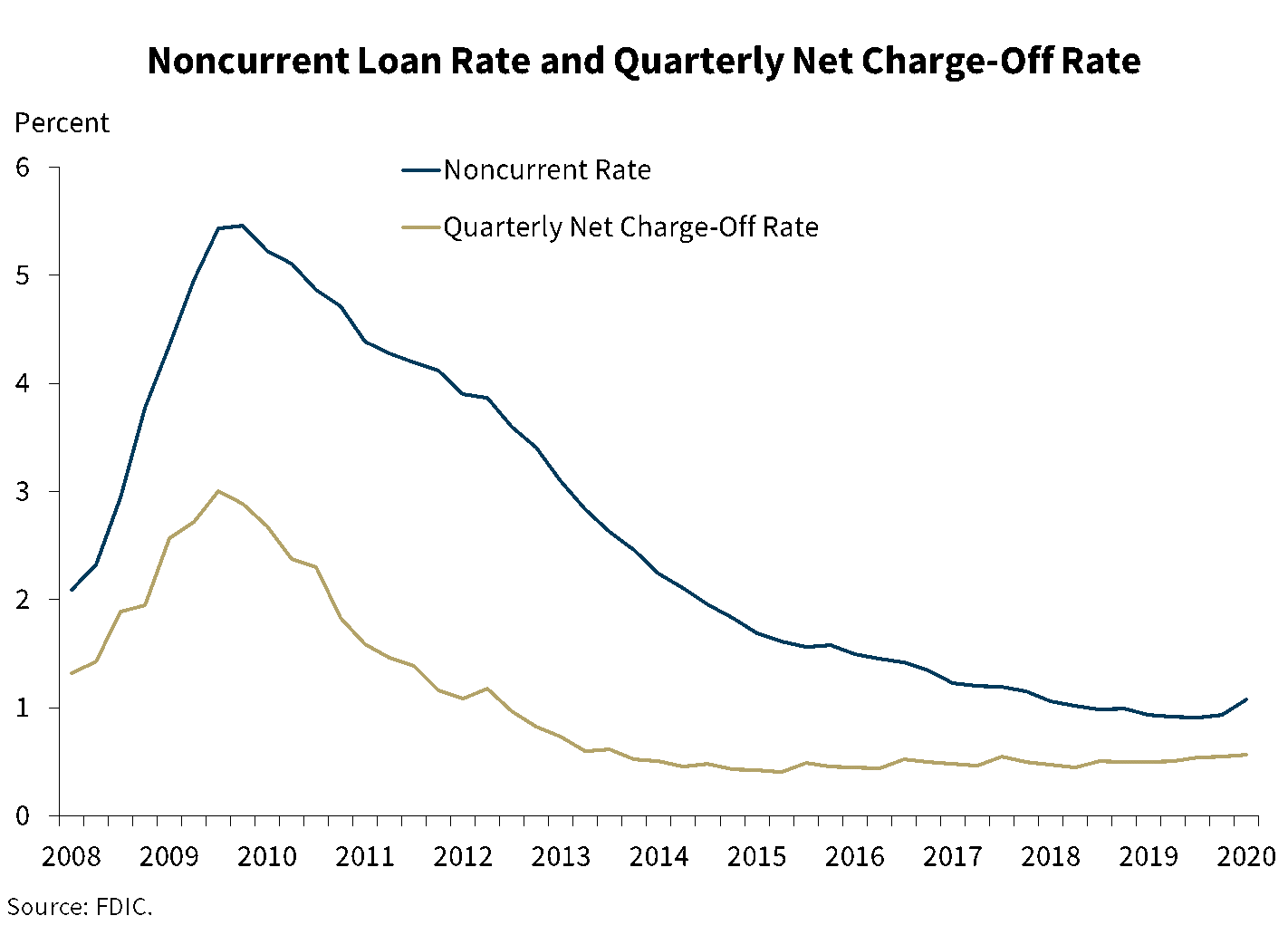 The C&I loan portfolio reported an increase of $2.4 billion in net charge-offs from a year ago. The net charge-off rate for C&I loans rose to 0.64 percent from 0.33 percent a year ago, but remains below the post-crisis high of 2.72 percent reported at year-end 2009. 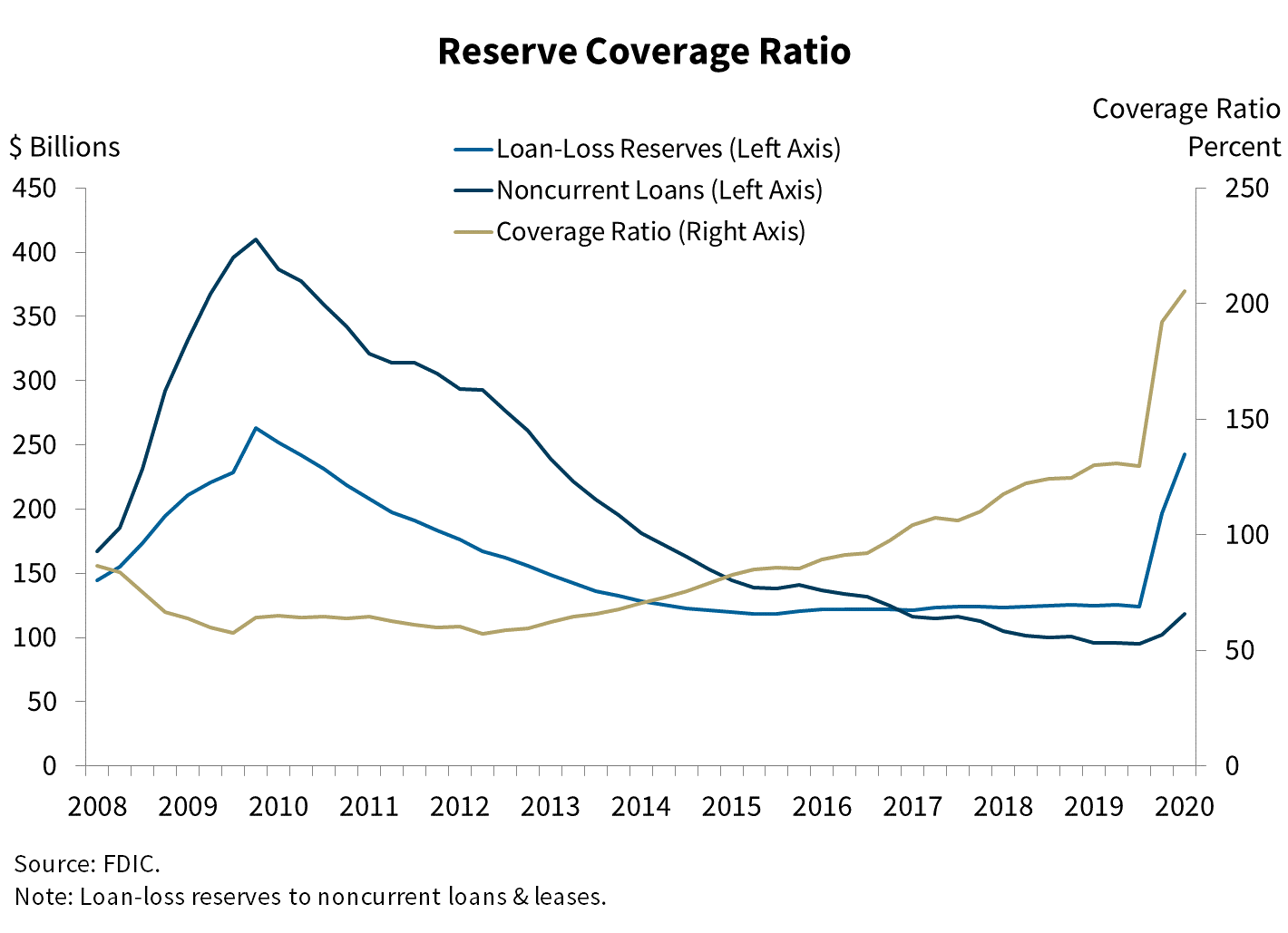 Chart 7 shows that the industry’s reserve coverage ratio, which measures loan-loss reserves relative to total noncurrent loan balances, increased from the previous quarter to 205 percent. The quarterly increase was due to higher loan-loss reserves, because of increased provisions reflecting current economic conditions. 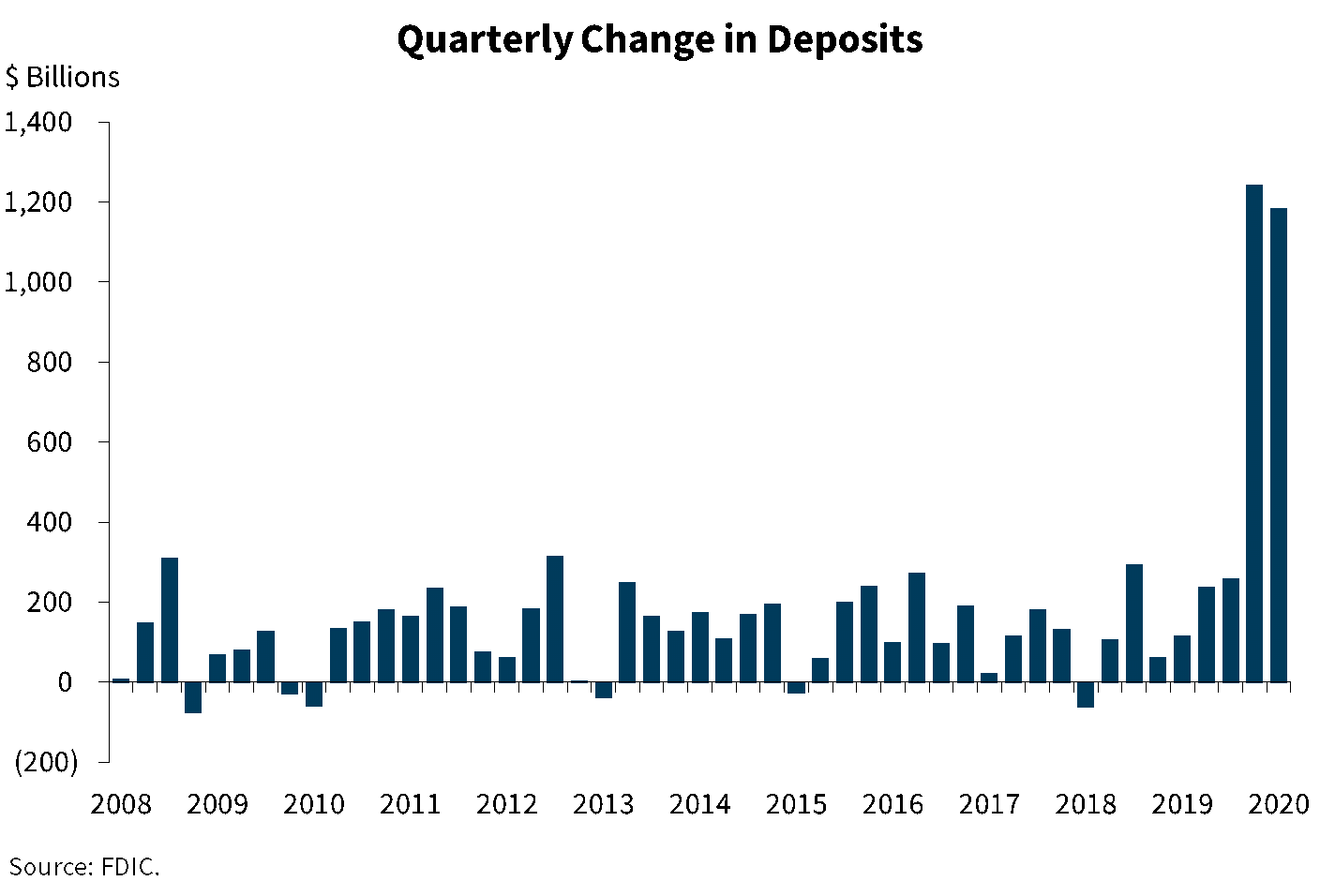 Chart 8 shows deposits continued to grow. This growth was due to several factors, including fiscal and monetary policy and economic uncertainty. Deposits increased by $1.2 trillion from the first quarter, and 21 percent from a year ago. This is the highest annual growth rate ever reported in the QBP. 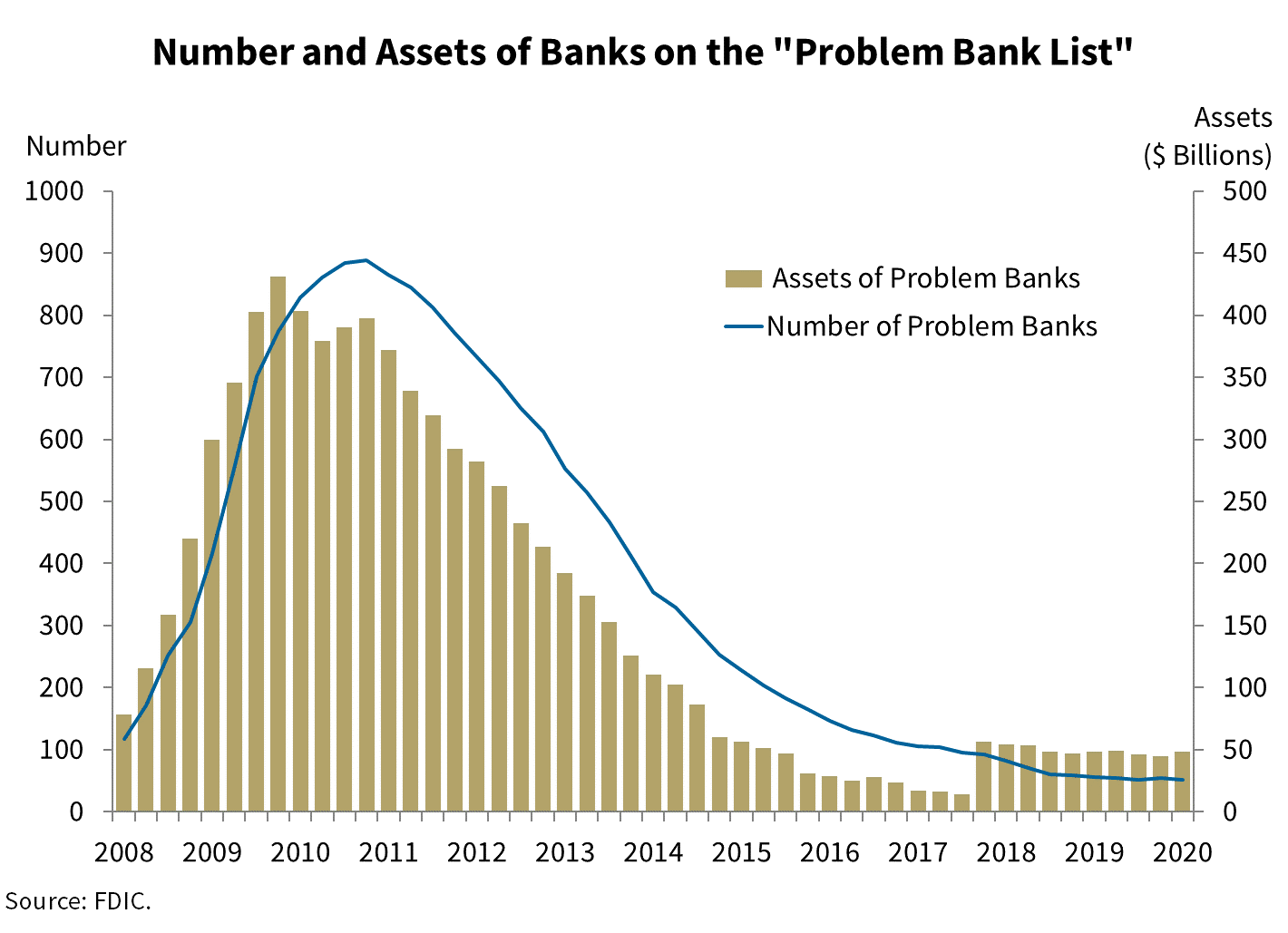 Chart 9 shows that the number of banks on the FDIC’s “Problem Bank List” declined from 54 to 52 during the quarter and remains near historic lows.

Changes to the number of insured institutions during the second quarter include one new bank that opened, 47 banks absorbed by mergers, and one bank that failed. 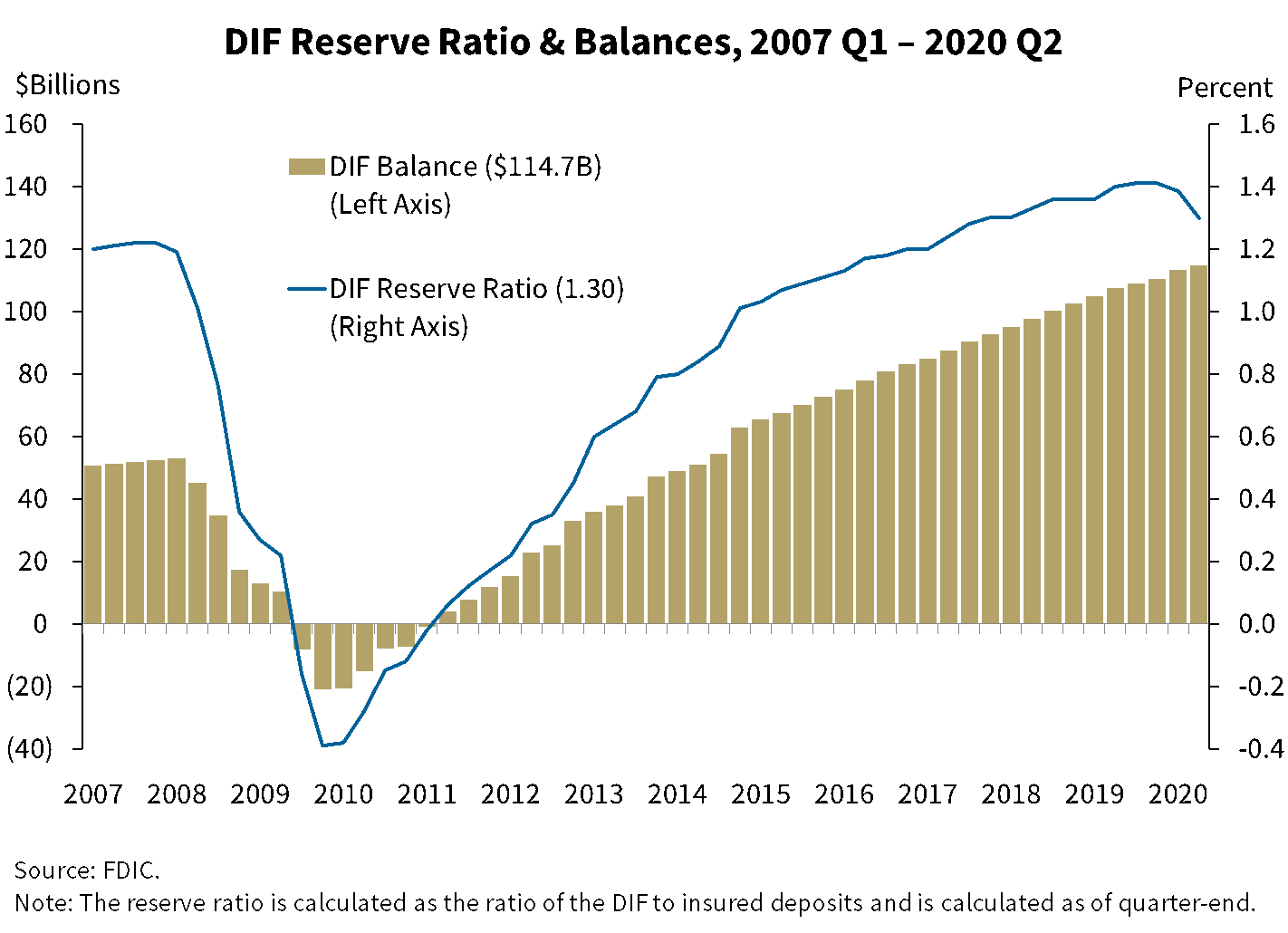 The DIF balance was $114.7 billion on June 30, up $1.4 billion from the end of the first quarter. Assessment income was the primary driver of the increase in the fund. Interest earned on investment securities held by the DIF also increased the fund balance; however, unrealized losses on available-for-sale securities held by the DIF partially offset the effect of that increase.

In summary, banking industry earnings continued to be affected by the uncertain economic conditions. However, banks continue to support their customers by taking in deposits and extending credit.

We will now answer questions regarding second-quarter performance of the banking industry.