WASHINGTON— Reports from 4,771 commercial banks and savings institutions insured by the Federal Deposit Insurance Corporation (FDIC) reflect aggregate net income of $64.4 billion in second quarter 2022, a decline of $6.0 billion (8.5 percent) from a year ago. An increase in provision expense drove the annual reduction in net income. These and other financial results for second quarter 2022 are included in the FDIC’s latest Quarterly Banking Profile released today. 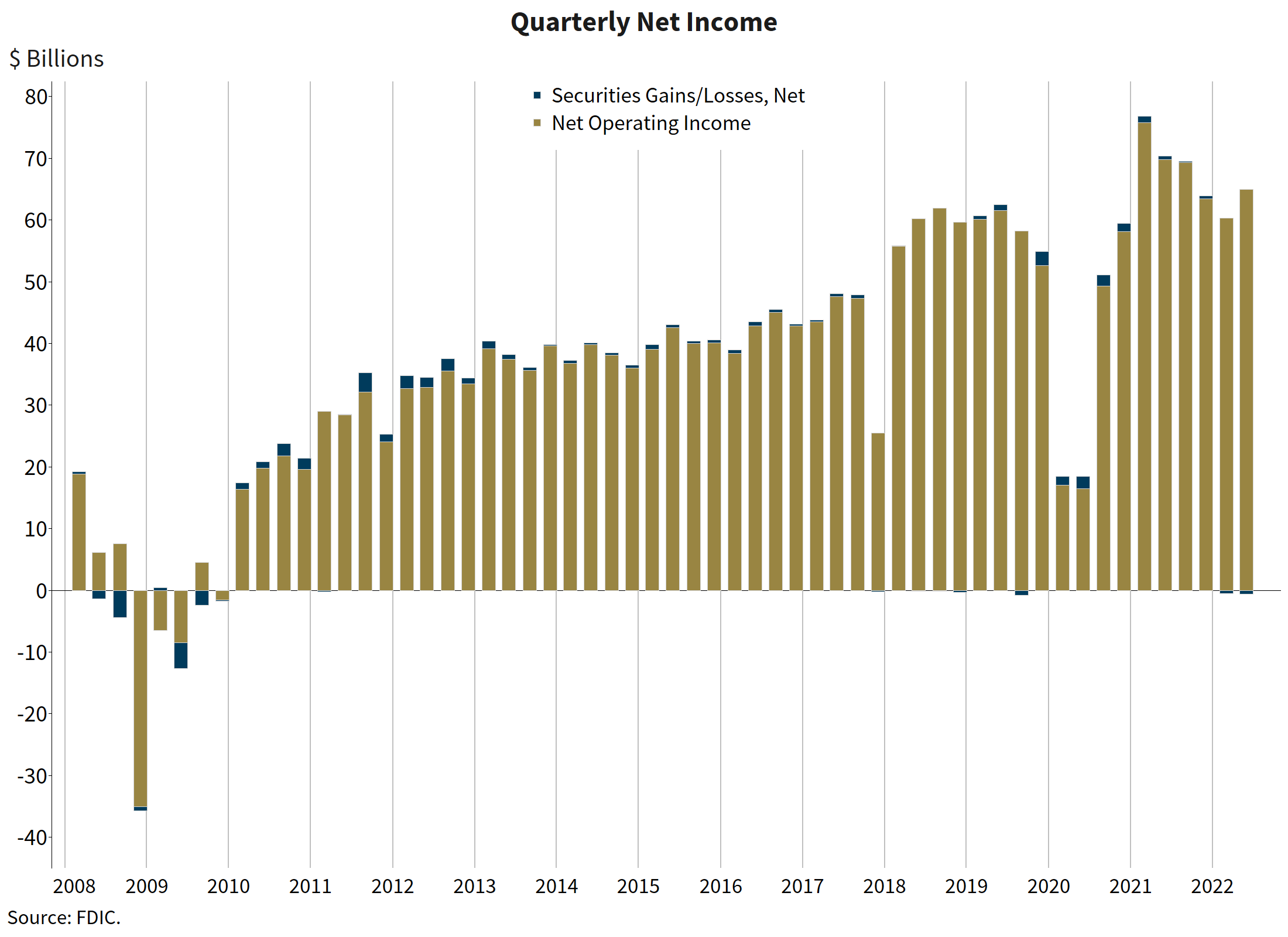 Net Income Declined Year Over Year: Quarterly net income totaled $64.4 billion, a decline of $6.0 billion (8.5 percent) from the same quarter a year ago, primarily due to an increase in provision expense. Provision expense increased $21.9 billion from the year-ago quarter, from negative $10.8 billion in second quarter 2021 to positive $11.1 billion this quarter. More than half of all banks (51.5 percent) reported an annual decline in quarterly net income. However, net income rose $4.6 billion (7.8 percent) from first quarter 2022 as growth in net interest income exceeded growth in provision expense.

Net Interest Margin Widened: The net interest margin (NIM) increased 26 basis points from the prior quarter to 2.80 percent, the highest quarterly growth in NIM since first quarter 2010. Most banks (70.5 percent) reported higher net interest income compared with a year ago.

The net interest margin for community banks widened 8 basis points from the year-ago quarter to 3.33 percent. This was the largest quarterly increase since second quarter 1985.

Credit Quality Was Favorable Overall Despite Growth in Early Delinquencies: Loans that were 90 days or more past due or in nonaccrual status (i.e., noncurrent loans) continued to decline (down $7.2 billion or 7.6 percent) from first quarter 2022. The noncurrent rate for total loans declined 9 basis points from the previous quarter to 0.75 percent, the lowest level since third quarter 2006. Total net charge-offs also continued to decline (down $600.7 million, or 8.2 percent) from a year ago. The total net charge-off rate declined 4 basis points to 0.23 percent—just above the record low of 0.19 percent set in third quarter 2021. However, early delinquencies (i.e., loans past due 30-89 days) increased $11.4 billion (25.0 percent) from the year-ago quarter and $2.8 billion (5.2 percent) from first quarter 2022. Both the quarterly and annual increases were driven by an increase in past due consumer loans.

2 Provisions for credit losses include both losses for loans and securities for Current Expected Credit Losses (CECL) adopters and only loan losses for non-adopters.

3 “All other consumer loans” includes single payment and installment loans other than automobile loans and all student loans.