Good morning, and welcome to our release of second quarter 2022 performance results for FDIC-insured institutions.

At the same time, the banking industry reported a moderate decline in quarterly net income from one year ago, primarily because of an increase in provision expense at the largest institutions.

The increase in provision expense—the amount set aside by institutions to protect against future credit losses—reflects the banking industry’s recognition of risks related to persistent economic uncertainties, and slowing economic growth, as well as the increase in loan balances.

The Deposit Insurance Fund (DIF) balance was $124.5 billion on June 30, up $1.4 billion from the end of the first quarter.  The reserve ratio rose three basis points to 1.26 percent, as insured deposits fell 0.7 percent.

Despite several favorable performance metrics in the second quarter, the banking industry continues to face significant downside risks.  These risks include the effects of high inflation, rapidly rising market interest rates, and continued geopolitical uncertainty.  Taken together, these risks may reduce profitability, weaken credit quality and capital, and limit loan growth in coming quarters.  Furthermore, higher market interest rates have led to continued growth in unrealized losses in the banking industry’s securities portfolios.  Higher interest rates may also erode real estate and other asset values as well as hamper borrowers’ loan repayment ability.  These will be matters of ongoing supervisory attention by the FDIC. 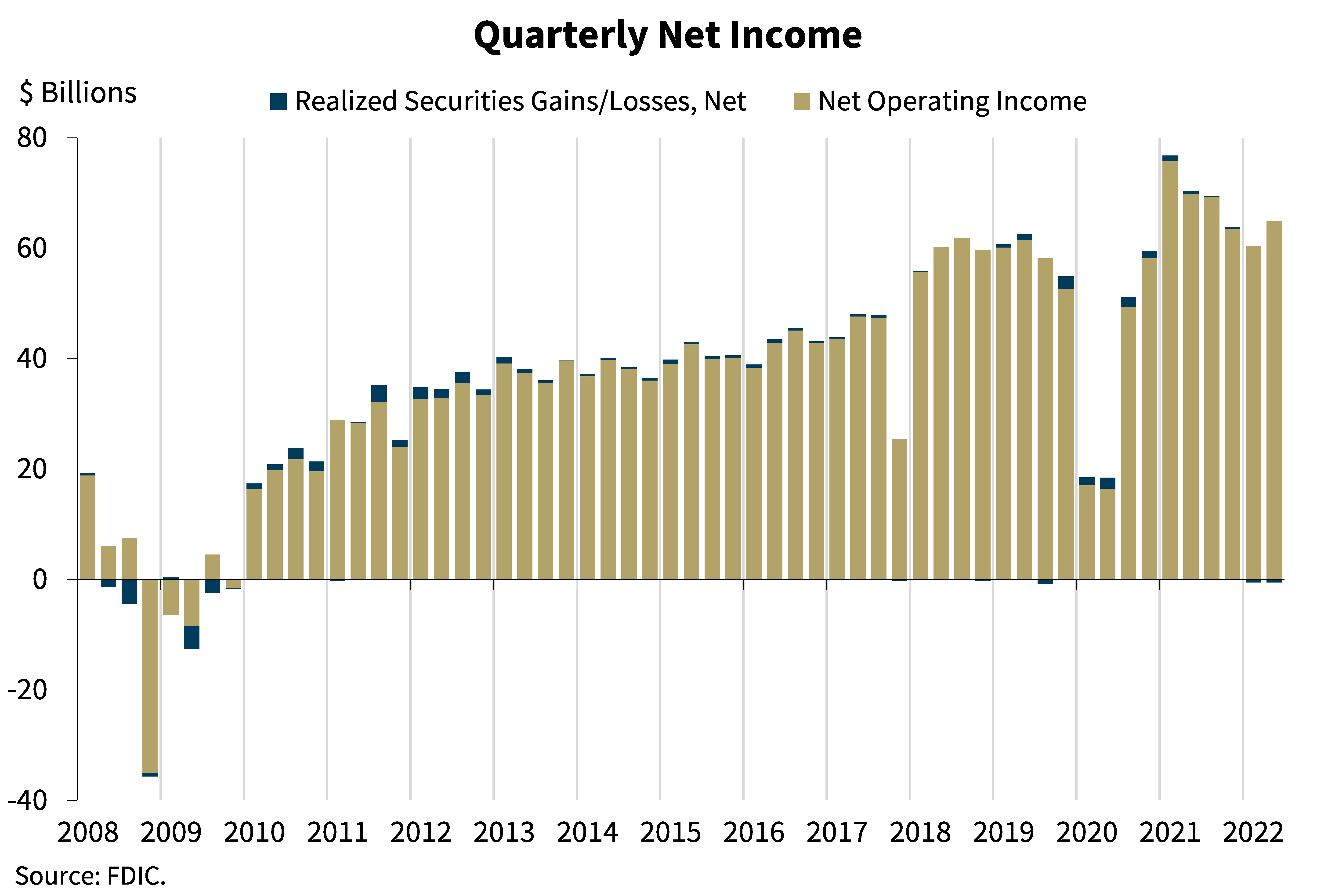 More than half of all banks reported lower quarterly net income relative to a year ago.  However, strong net interest income growth supported an increase of 9.5 percent in net income for the banking industry from the first quarter 2022.

Compared with the industry, community banks reported a more moderate decline in net income from the year-ago quarter.  Net income for community banks declined $523.0 million (or 6.5 percent), from second quarter 2021.

Unlike results for the industry, the decline in net income for community banks was driven by several factors, including higher noninterest expense, lower noninterest income, reduced revenue from the sale of securities, and, to a lesser degree, higher provisions for credit losses. 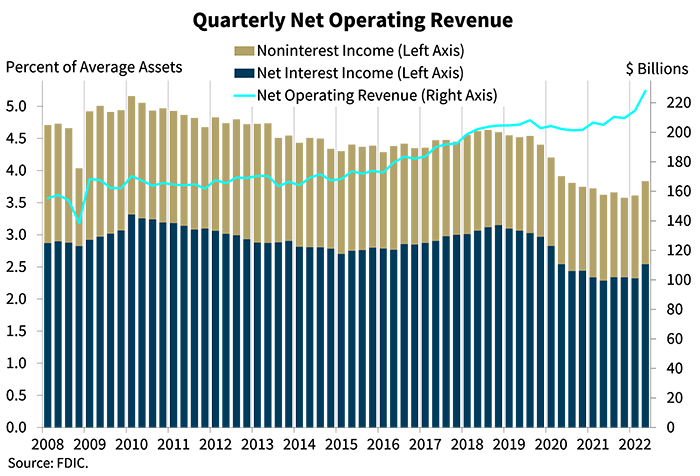 Our next chart shows that quarterly net operating revenue increased 6.2 percent from first quarter 2022 to $228.0 billion.  Net interest income as a percentage of average assets increased 22 basis points from the first quarter to 2.54 percent, but remains below the pre-pandemic level. 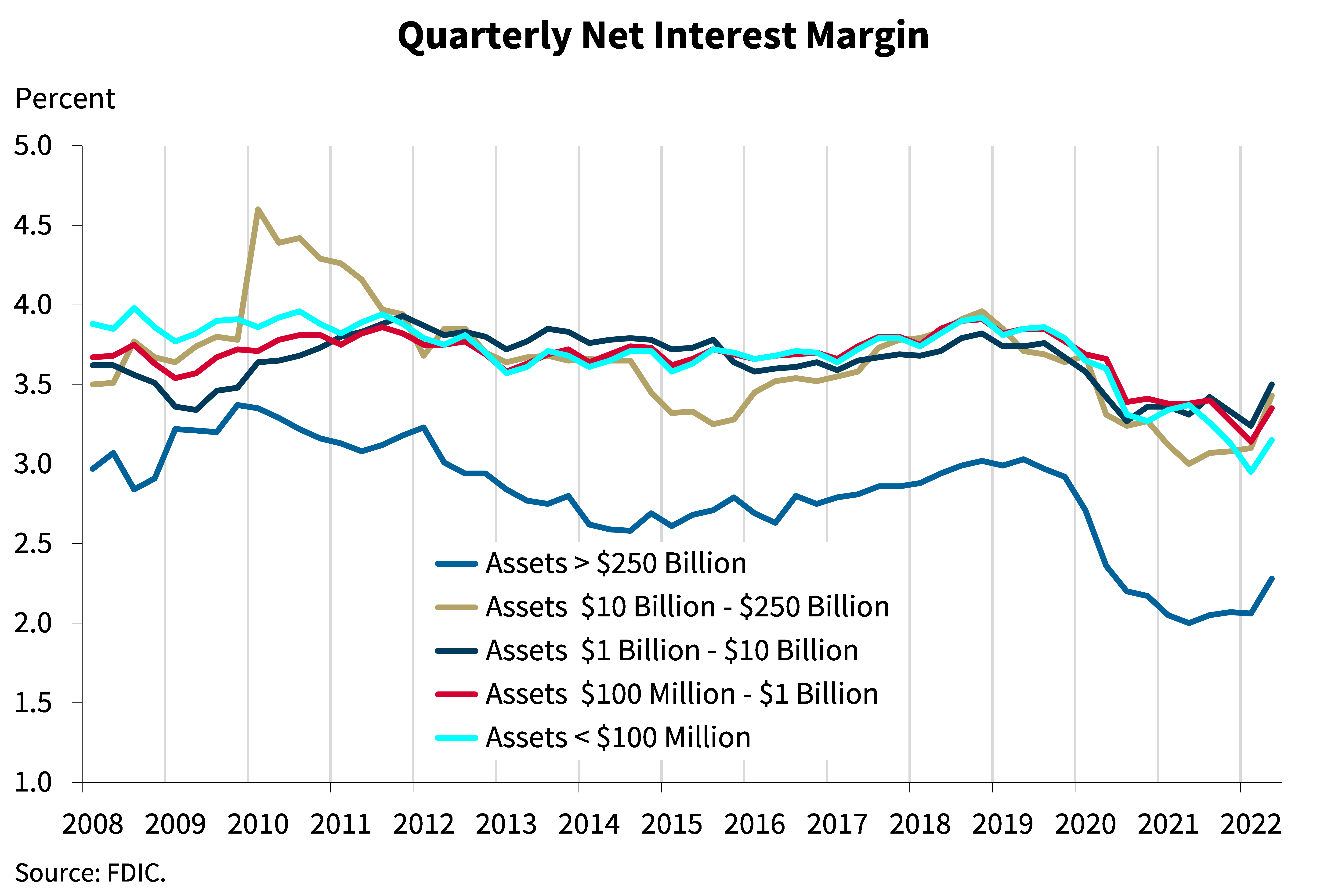 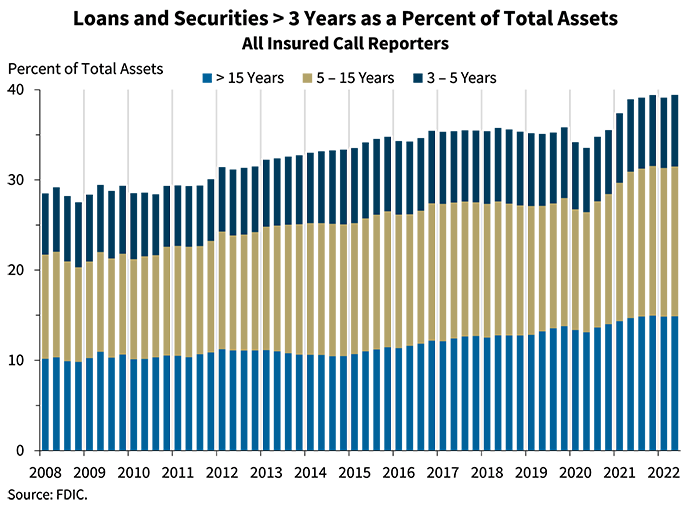 The next chart shows that the banking industry’s holdings of longer-term loans and securities remained elevated at 39.4 percent in the second quarter.  Although this higher level of longer-term loans and securities helped preserve net interest margins during a period of lower interest rates, this strategy has resulted in an increase in the level of unrealized losses on investment securities as a result of increased interest rate risk.

Compared with the industry, community banks continued to report a higher proportion of assets with maturities longer than three years, which represent 53.6 percent of total assets. 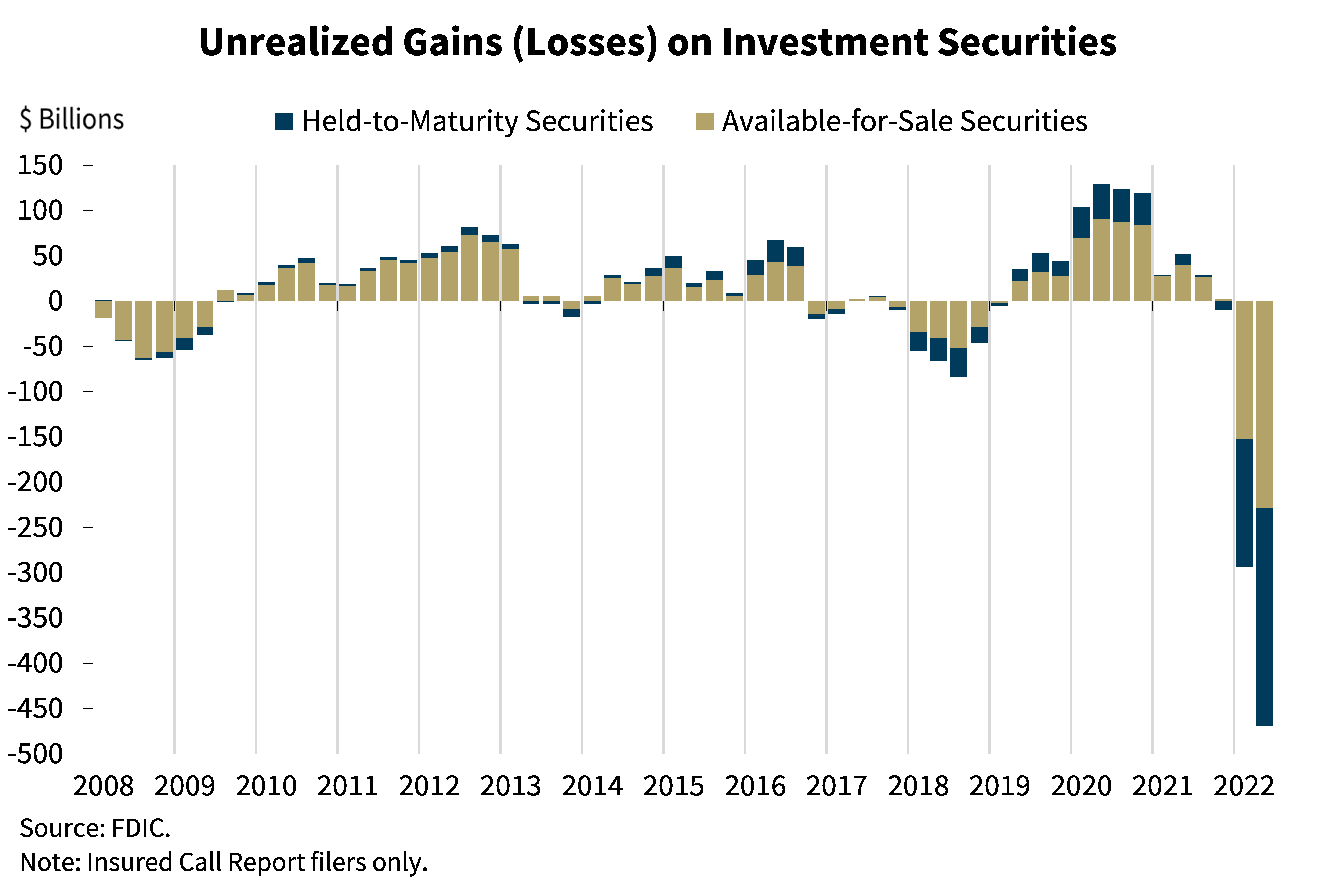 This chart shows the continued growth in unrealized losses on investment securities this quarter due to increases in market interest rates.  Although growth in unrealized losses slowed somewhat in the second quarter, elevated asset maturities combined with a moderate decline in deposits underscores the risk of actual losses should banks need to sell investments to meet liquidity needs. 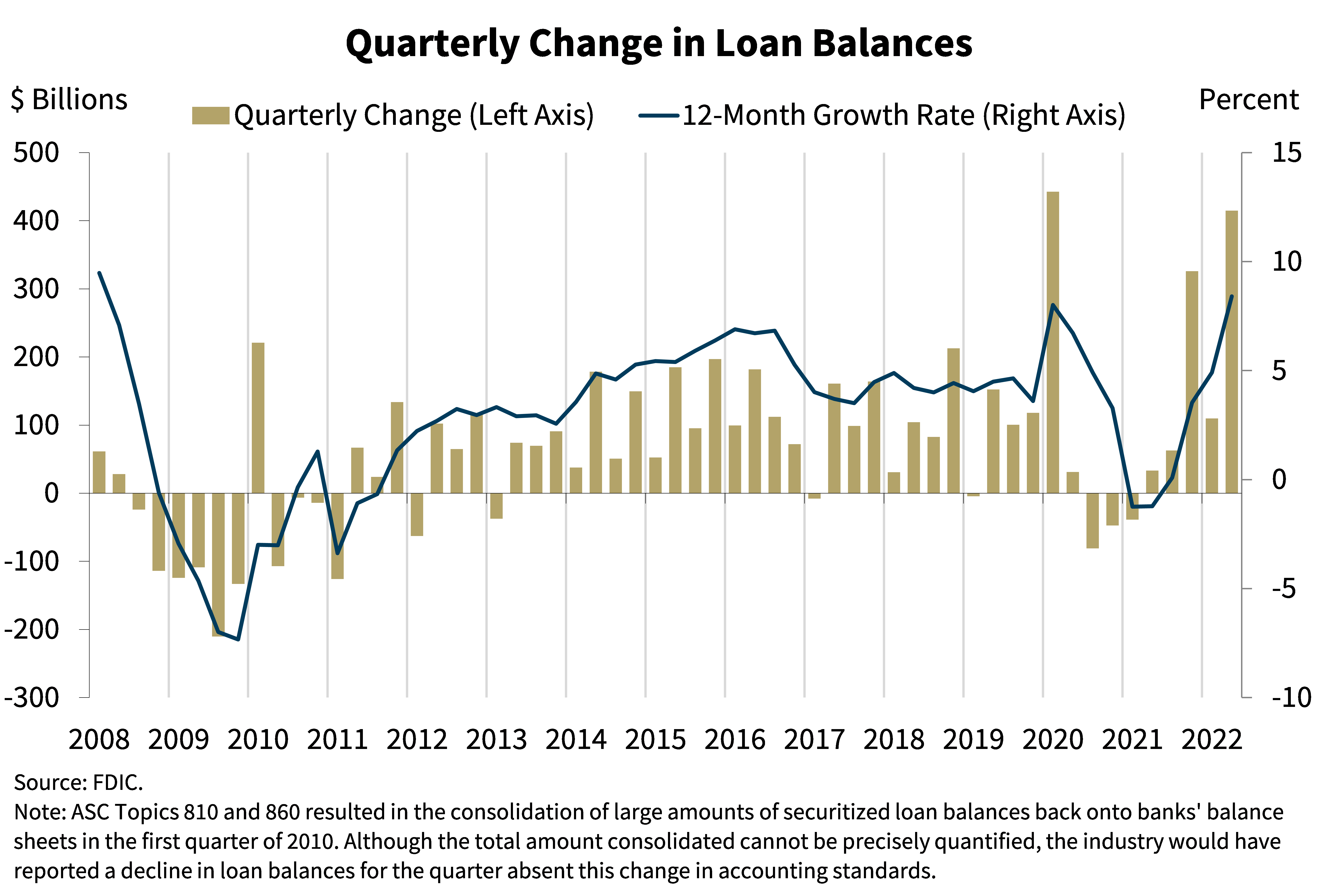 This chart shows that total loan balances grew for a fifth consecutive quarter, despite the continued payoff and forgiveness of Paycheck Protection Program (PPP) loans.  Loan growth for the industry exceeded the pre-pandemic average pace even without adjusting for the reduction in PPP loan balances. 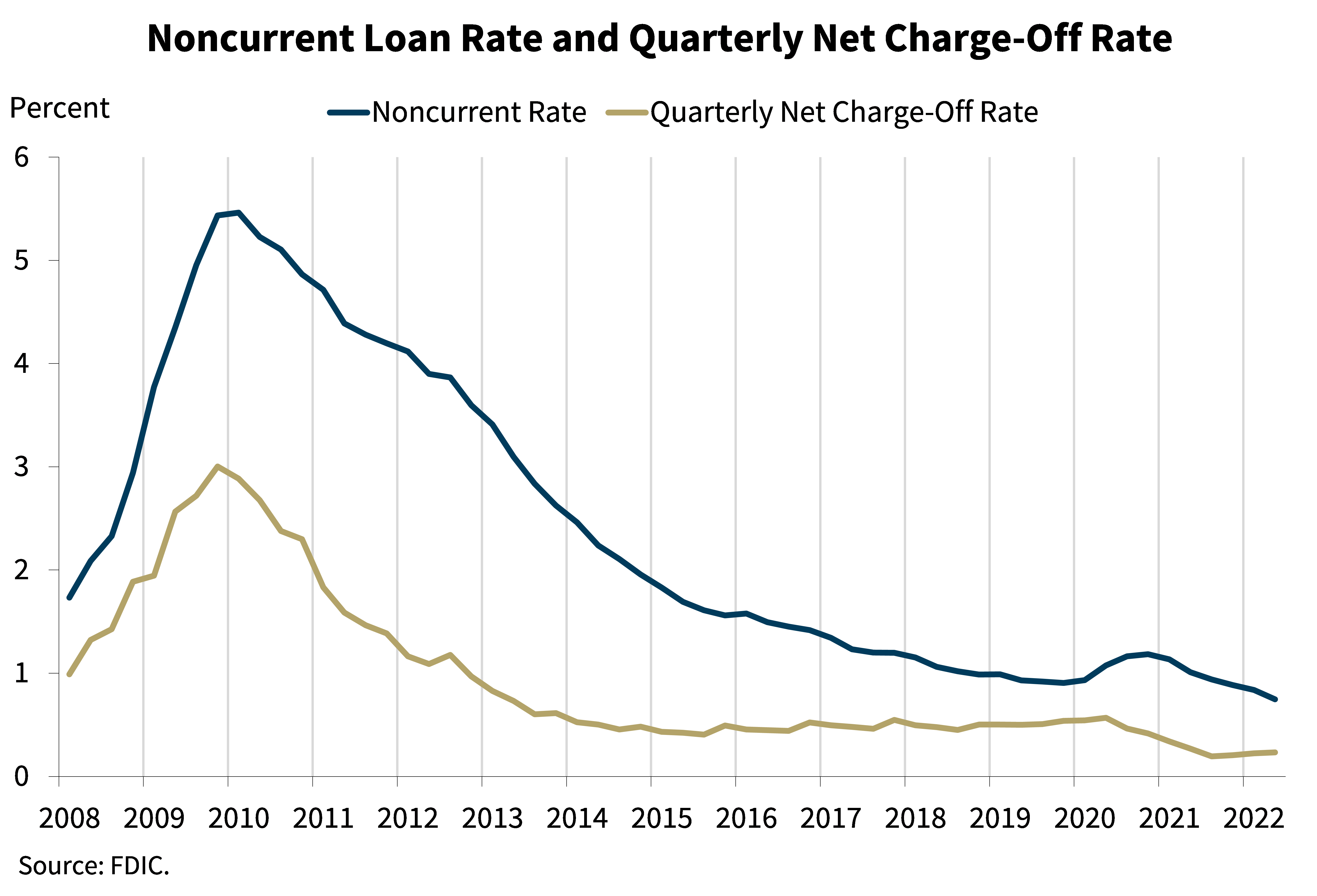 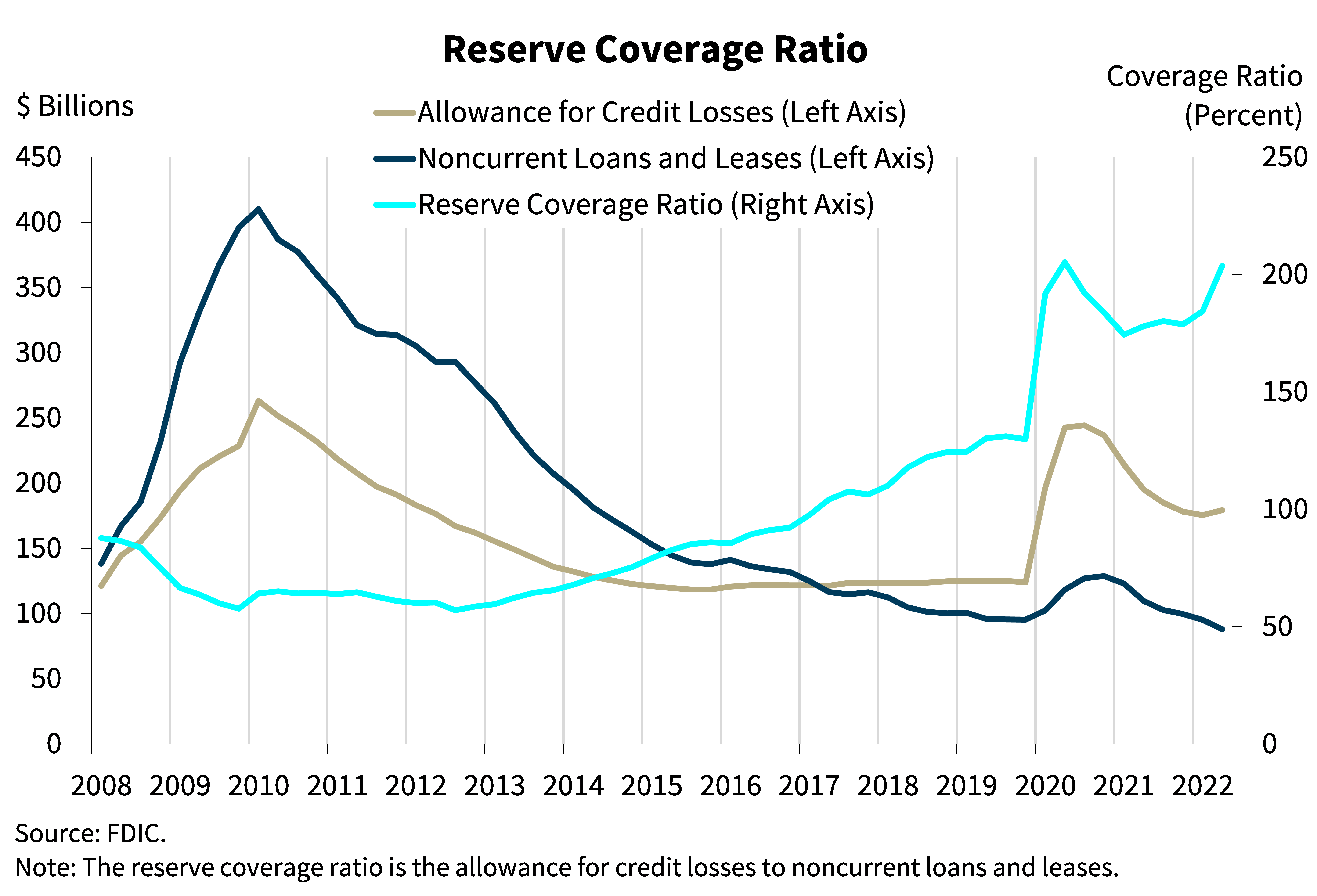 Our next chart shows that noncurrent loans fell by a greater amount than the allowance for credit losses year-over-year, resulting in an improvement in the average reserve coverage ratio.  The ratio of credit loss reserves to noncurrent loans increased from 177.9 percent one year ago to 203.6 percent this quarter. 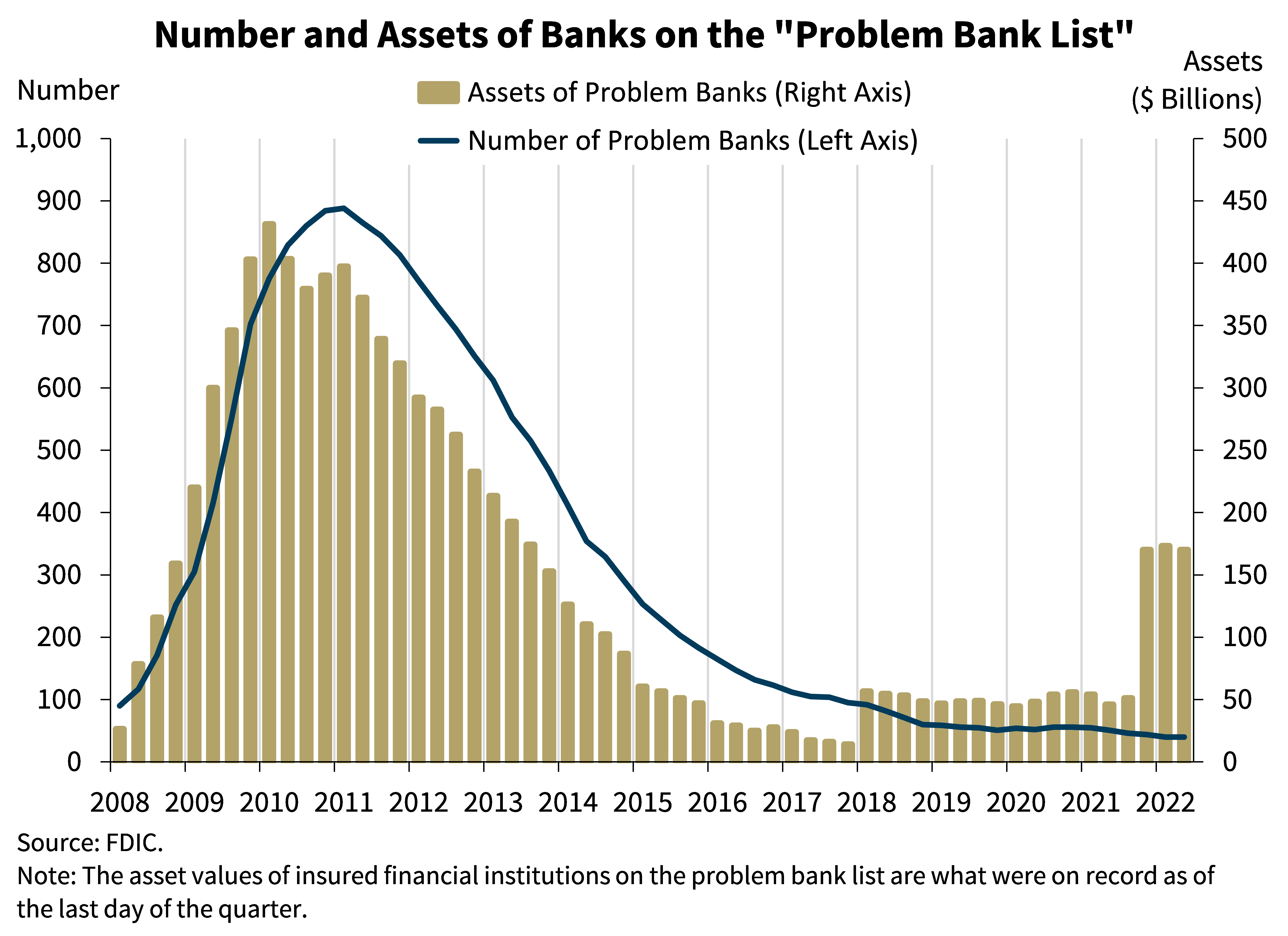 This chart shows the number and total assets of banks on the “Problem Bank List.”  The number of banks on the list is unchanged from the previous quarter at 40 banks.  Total assets held by problem banks declined a slight $2.7 billion to $170.4 billion in the second quarter.  The number of problem banks continues to be at its lowest level since QBP data collection began in 1984.  No banks failed in the second quarter. 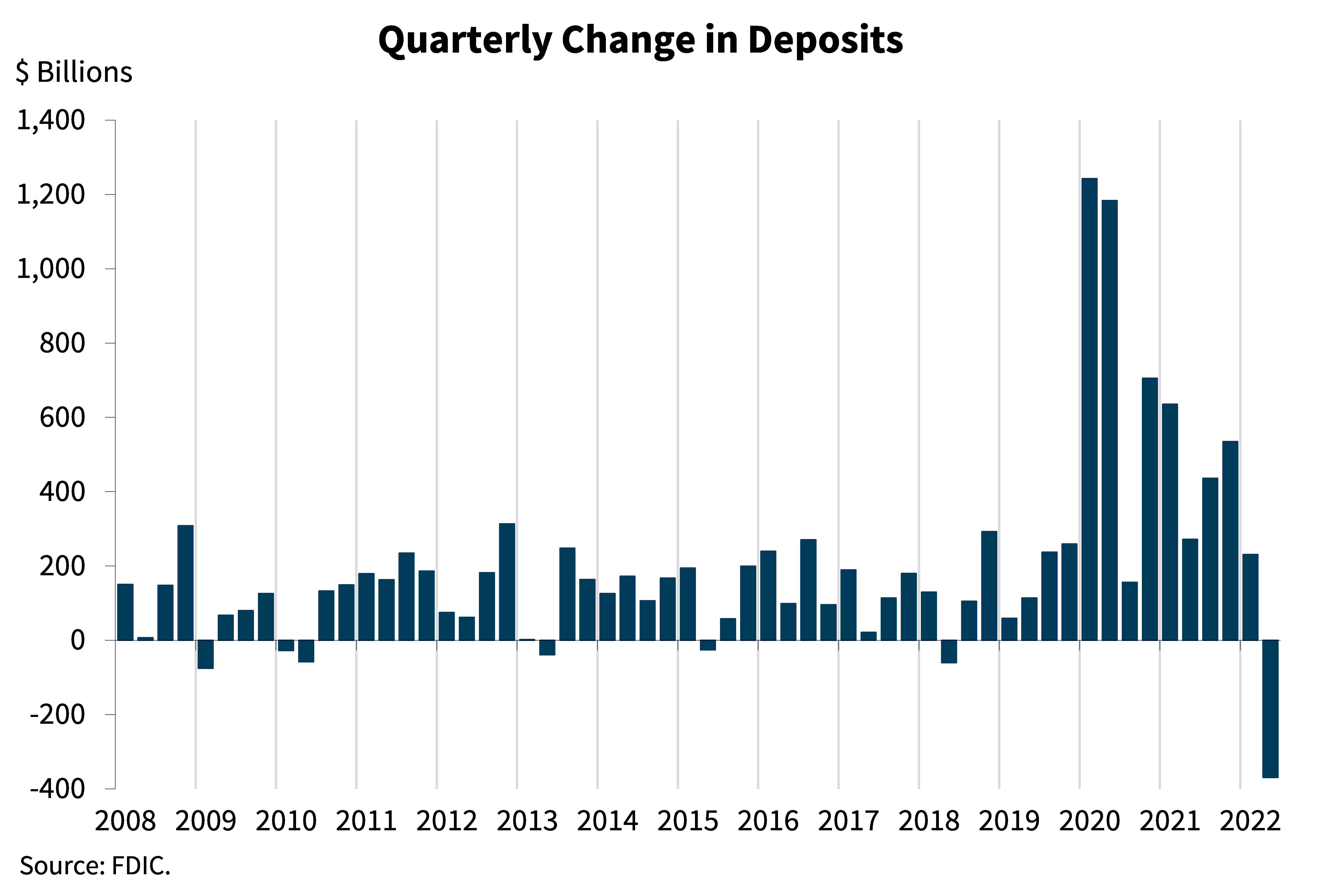 This chart shows that deposits declined for the first time since 2018.  A reduction in uninsured deposits was the primary driver of the quarterly decline, although there was also a small reduction in insured deposits.  The banking industry also reported an increase in wholesale funding, primarily Federal Home Loan Bank borrowings, for the second consecutive quarter, as deposit growth declined.

Deposits totaled $19.6 trillion, down 1.9 percent from the level reported last quarter.  While this reduction slightly offsets the unprecedented growth in deposits reported during the pandemic, total deposits are still well above pre-pandemic levels.  As of the second quarter, deposit levels remain elevated at 82.4 percent of total assets, higher than the pre-pandemic average of 76.7 percent. 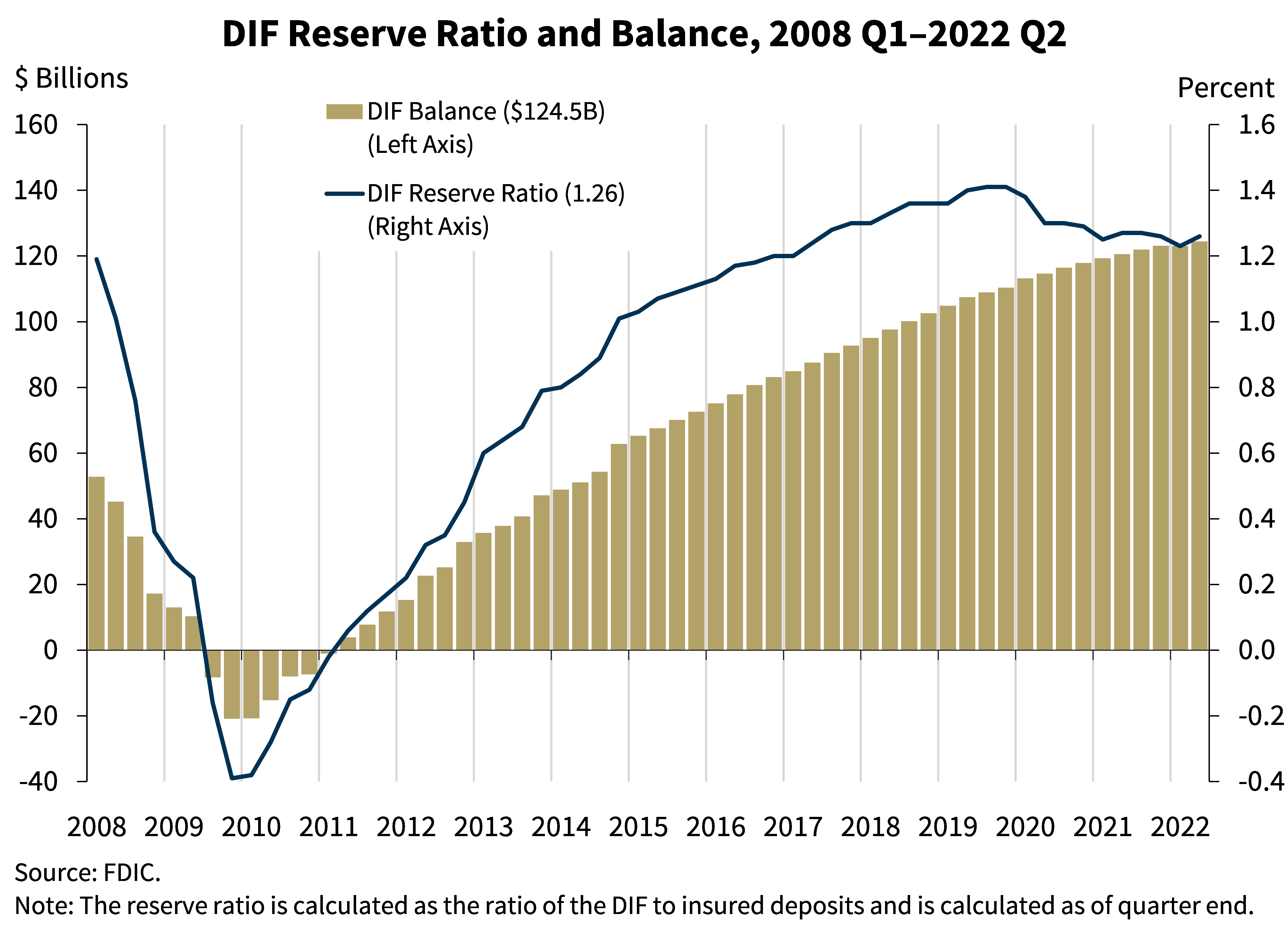 This chart shows that the DIF balance was $124.5 billion on June 30, up approximately $1.4 billion in the second quarter.  Assessment revenue was the primary driver of the increase in the fund, offset partially by unrealized losses on available-for-sale securities in the DIF portfolio, driven by the rising rate environment.  Insured deposits decreased by 0.7 percent during the second quarter.  Typically, insured deposit growth in second quarter is flat to marginally negative.  This year’s second quarter decline is largely consistent with that historical trend, although slightly more negative than the historical quarterly average.  Year-over-year insured deposit growth remained strong at 4.3 percent.  These factors caused the reserve ratio—the fund balance relative to insured deposits—to increase by 3 basis points to 1.26 percent as of June 30.  This is 1 basis point lower than a year ago, when the reserve ratio was 1.27 percent.

The FDIC adopted a DIF Restoration Plan on September 15, 2020, that would return the reserve ratio to 1.35 percent, the statutory minimum, by September 2028 as required by law.  During its most recent progress report to the Board, the FDIC projected that the reserve ratio is at risk of not reaching 1.35 percent by the statutory deadline.  In June, the FDIC amended the Restoration Plan and approved a notice of proposed rulemaking to increase initial base deposit insurance assessment rates by 2 basis points, beginning in the first quarterly assessment period of 2023.  As mentioned in the Notice of Proposed Rulemaking related to the Amended Restoration Plan, this would result in an estimated annual reduction in average industry income of less than 2 percent.

These actions were undertaken to improve the likelihood that the reserve ratio reaches the statutory minimum of 1.35 percent before the statutory deadline while reducing the potential for a pro-cyclical increase in assessment rates should the banking industry enter a period of stress in the interim.  The FDIC continues to incorporate recent data into its projections of the reserve ratio.  The intent of the proposed change in assessment rates is also to further support growth toward the FDIC’s long-term goal of a 2 percent reserve ratio, an important complementary objective.  The comment period on the proposed rulemaking to increase assessment rates closed on August 20.  We will carefully consider all comments received.

However, the banking industry continues to face downside risks resulting from prevailing economic uncertainties, inflationary pressures, a rising interest rate environment, and geopolitical concerns.  These factors could hamper bank profitability, weaken credit quality and capital, and limit loan growth.  These risks will be matters of continued supervisory attention by the FDIC over the coming year.