WASHINGTON— Reports from 4,796 commercial banks and savings institutions insured by the Federal Deposit Insurance Corporation (FDIC) reflect aggregate net income of $59.7 billion in first quarter 2022, a decline of $17.0 billion (22.2 percent) from a year ago.  An increase in provision expense drove the annual reduction in net income.  These and other financial results for first quarter 2022 are included in the FDIC’s latest Quarterly Banking Profile released today. 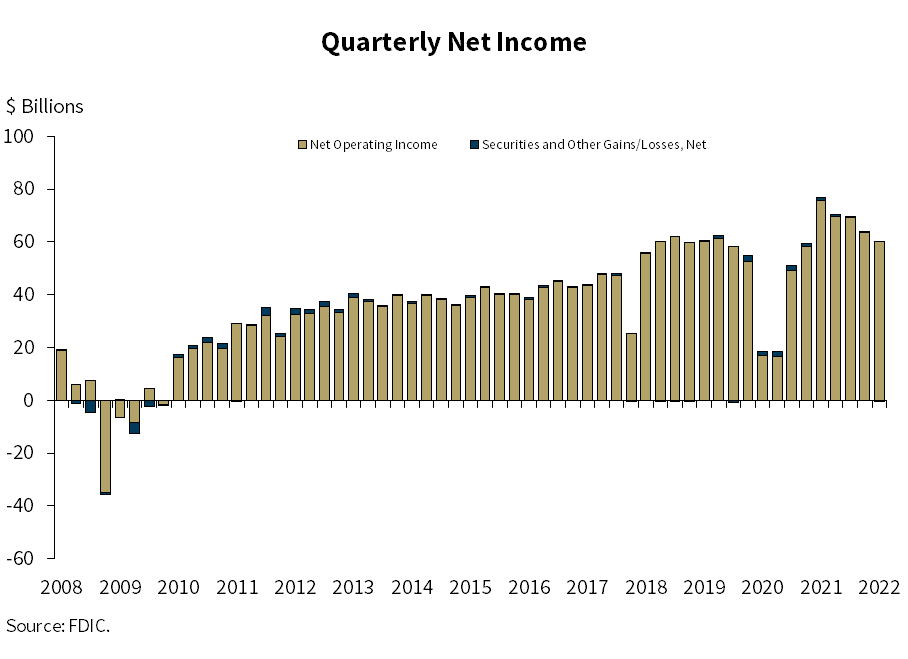 “In the first quarter, net income declined from the year-ago quarter as the banking industry raised provision expenses to reflect loan growth as well as economic and geopolitical uncertainty,” Gruenberg said.

Net Interest Margin Remained Relatively Stable Quarter Over Quarter: The net interest margin (NIM) declined by one basis point from the prior quarter to 2.54 percent.  NIM was 4 basis points higher than the record low set in second quarter 2021 but 2 basis points lower than the level reported in the year-ago quarter. While more than half of banks (57.2 percent) reported higher net interest income compared with a year ago, NIM expansion was limited by earning asset growth, which continued to outpace net interest income growth.

Loan Balances Increased from the Previous Quarter and a Year Ago: Total loan and lease balances increased $109.9 billion (1.0 percent) from the previous quarter. The banking industry reported growth in several loan portfolios, including commercial and industrial (C&I) loans (up $81.3 billion, or 3.5 percent), nonfarm nonresidential commercial real estate (CRE) loans (up $28.2 billion, or 1.7 percent), and “all other consumer loans” (up $20.4 billion, or 2.0 percent).2

The Reserve Ratio for the Deposit Insurance Fund Fell to 1.23 Percent: The Deposit Insurance Fund (DIF) balance was $123.0 billion as of March 31, down approximately $100 million from the end of the fourth quarter.  The increase in unrealized losses on available-for-sale securities in the DIF portfolio, driven by the rising rate environment, was the primary reason for the decline.  The reserve ratio fell to 1.23 percent due to both the decline in the DIF and growth in insured deposits.

1 The record low average cost of funding earning assets cited in the fourth quarter issue of the Quarterly Banking Profile was 0.15 percent.  Due to the effect of Call Report restatements subsequent to the publication, this ratio increased from 0.15 percent to 0.16 percent.

2 “All other consumer loans” includes single payment and installment loans other than automobile loans and all student loans.