Good morning, and welcome to our release of first quarter 2022 performance results for FDIC-insured institutions.

The net interest margin stayed relatively stable and low, declining just one basis point from the prior quarter to 2.54 percent. Most banks continued to report increases in net interest income as result of loan growth, with more than half of insured banks reporting higher net interest income compared with a year ago.

The Deposit Insurance Fund balance was $123.0 billion on March 31, relatively flat from the end of the fourth quarter.  The reserve ratio fell 4 basis points to 1.23 percent, as insured deposits grew 2.5 percent.

The banking industry continues to face several challenges, including lingering uncertainties related to the trajectory of the pandemic and any effects it may have on the longer-term health of the economy and banking industry.  In addition, inflationary pressures, rising interest rates, and geopolitical uncertainty could hamper bank profitability, weaken credit quality, and reduce loan growth.  Specifically, rising interest rates, which have already contributed to high levels of unrealized losses in the banking industry’s securities portfolios, could also lower real estate and other asset values and limit loan repayment ability.  These will be matters of ongoing supervisory attention by the FDIC over the coming year.

Compared with the industry, community banks reported a lower rate of decline in net income.  Community banks’ net income was down $1.1 billion or 14.0 percent from the same quarter a year ago.  A reduction in income from loan sales and increased business expenses drove this decline. 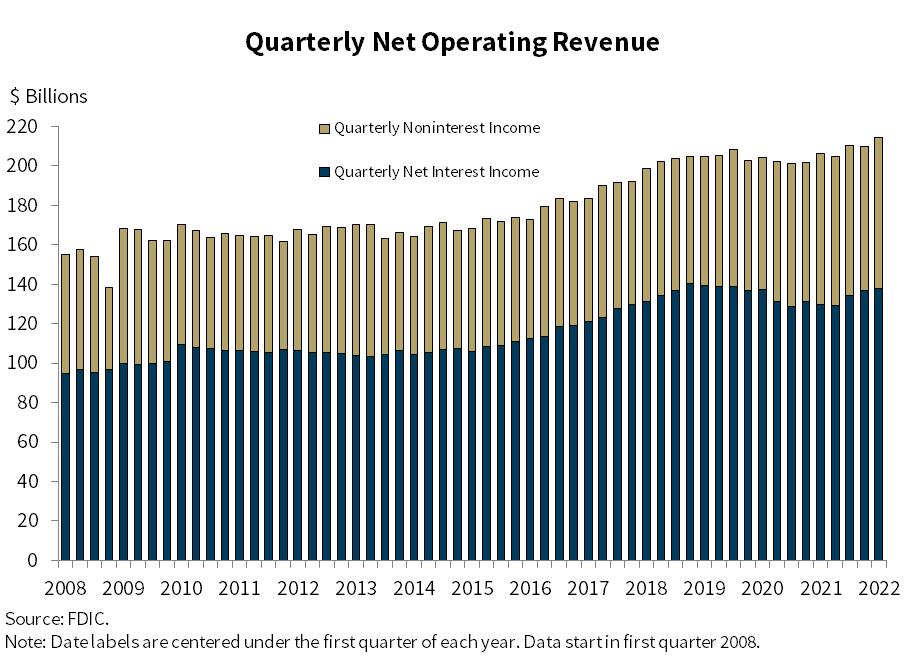 Our next chart shows that quarterly net operating revenue increased 3.9 percent from first quarter 2021 to $214.7 billion.

Noninterest income declined slightly, by $170.2 million, from a year ago primarily due to a decline in income from loan sales. 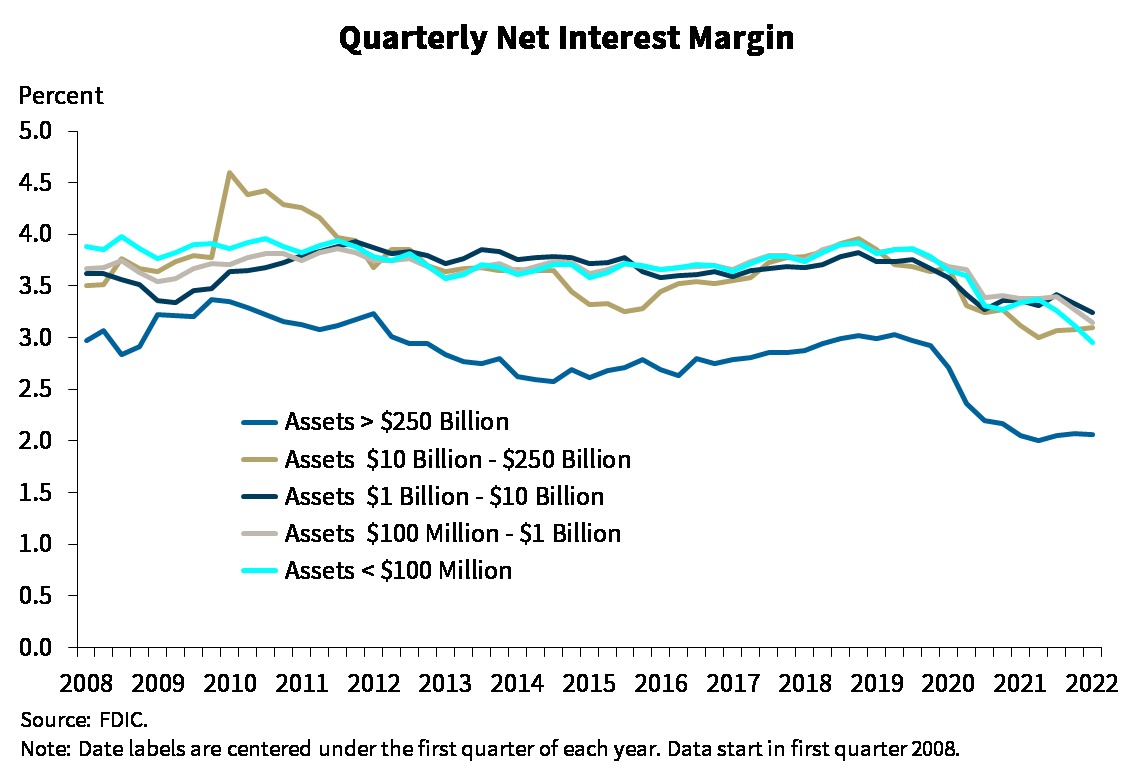 The net interest margin for community banks narrowed 15 basis points from the year-ago quarter to 3.11 percent. 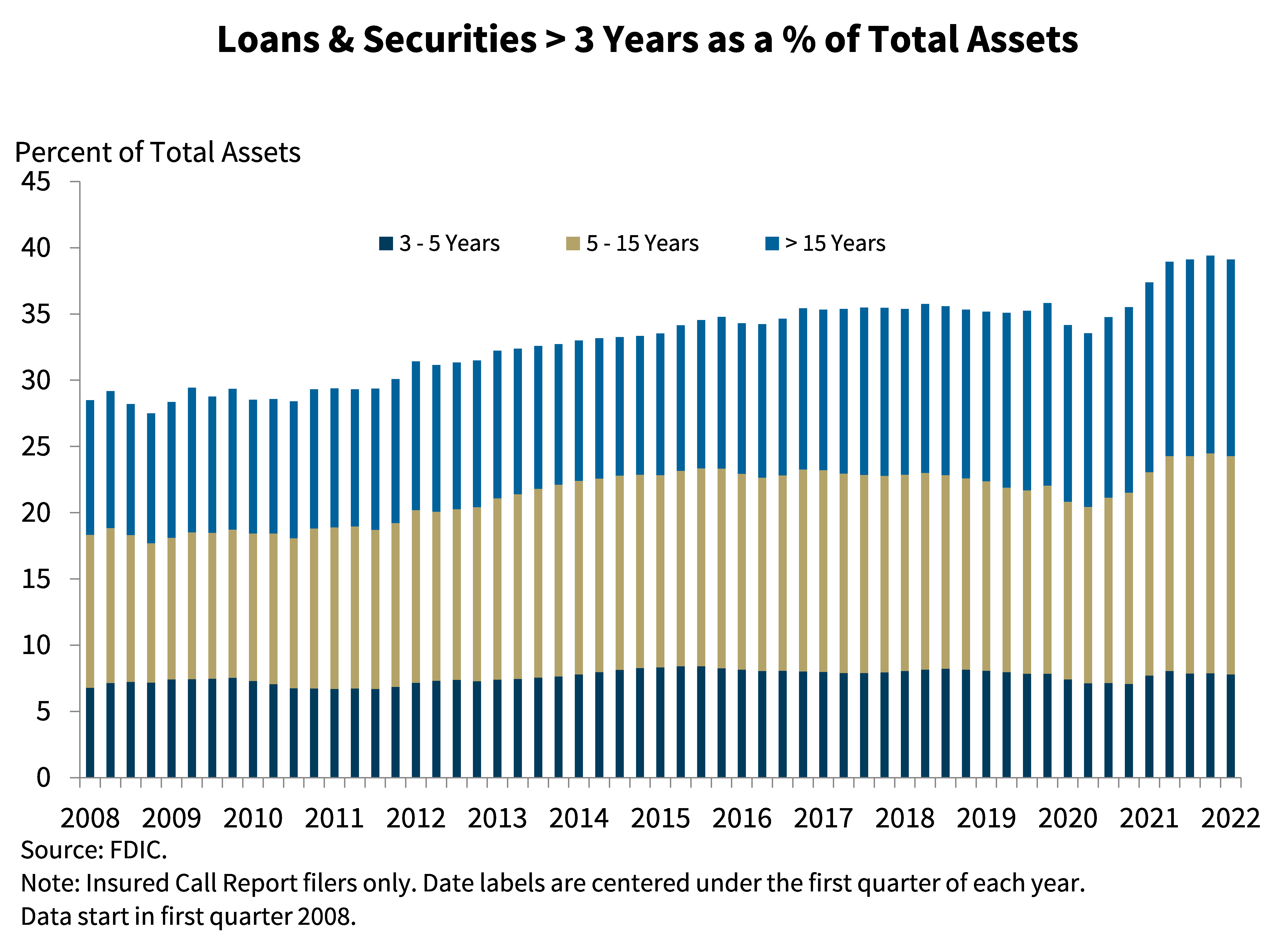 Community banks also maintained a consistent, but higher, proportion of assets with maturities greater than three years to total assets at just over 52 percent. 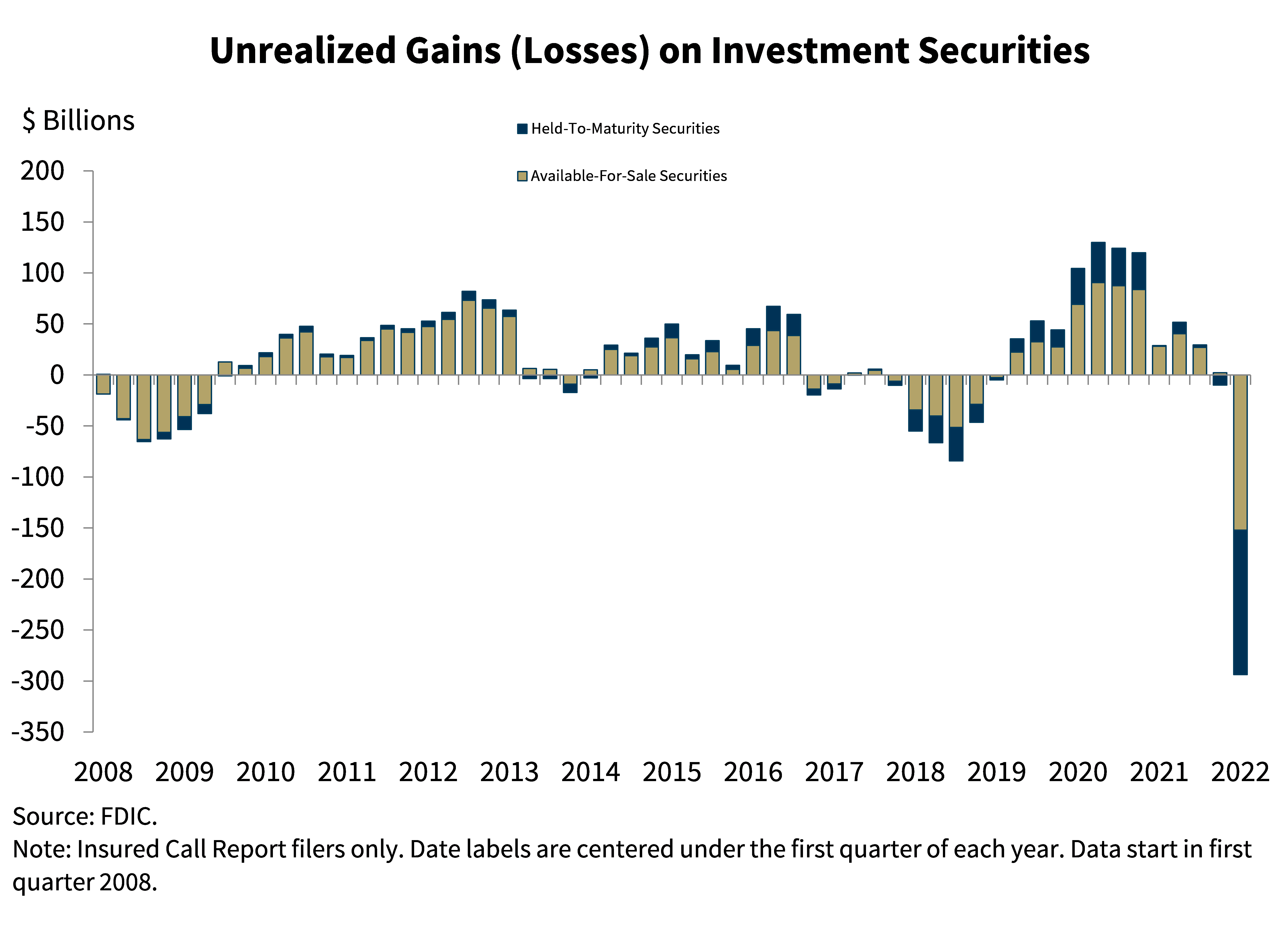 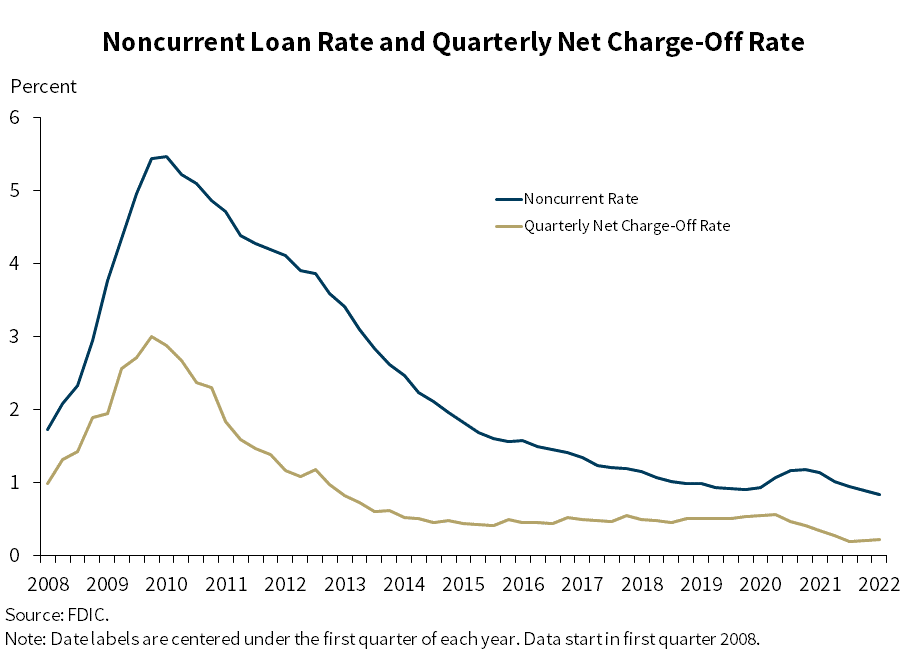 Our next chart shows that asset quality ratios for the industry remain favorable.  The noncurrent and net charge-off rates are only slightly above historical lows.  The noncurrent rate declined 5 basis points from fourth quarter driven by reductions in noncurrent 1 to 4 family residential real estate and nonfarm nonresidential commercial real estate loan balances.  Annual reductions in credit card and commercial and industrial loan net charge-offs helped reduce the industry’s net charge-off rate by 12 basis points from one year ago to 0.22 percent. 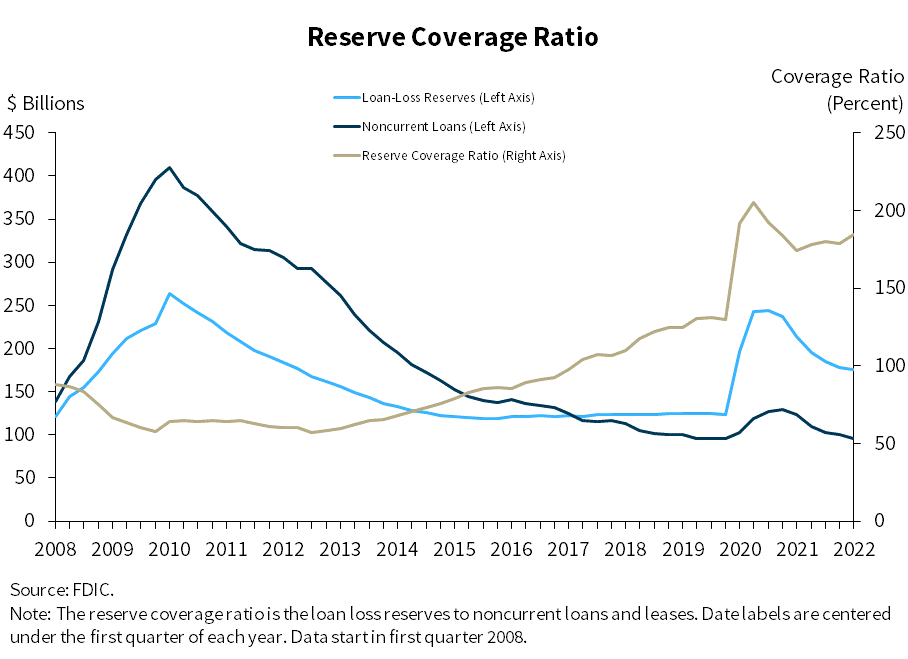 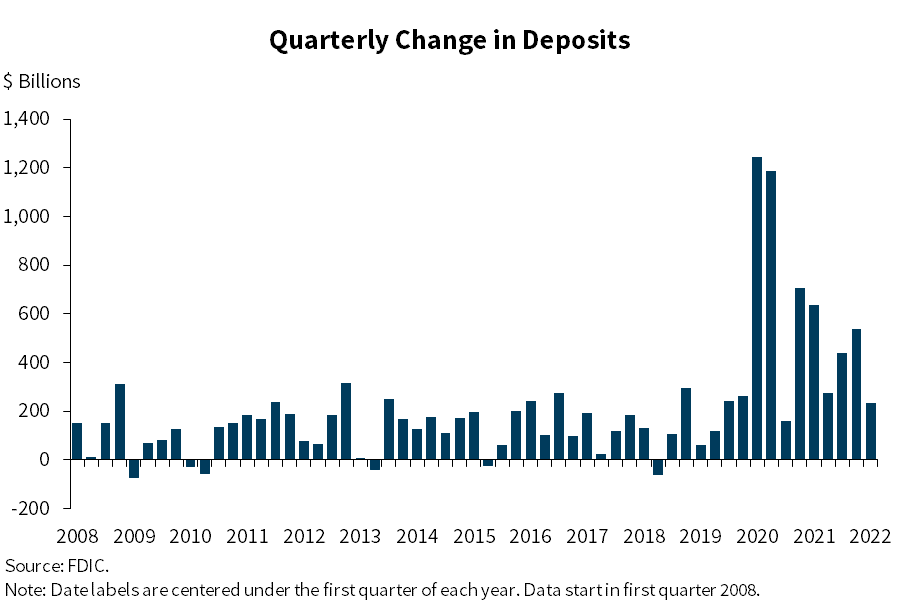 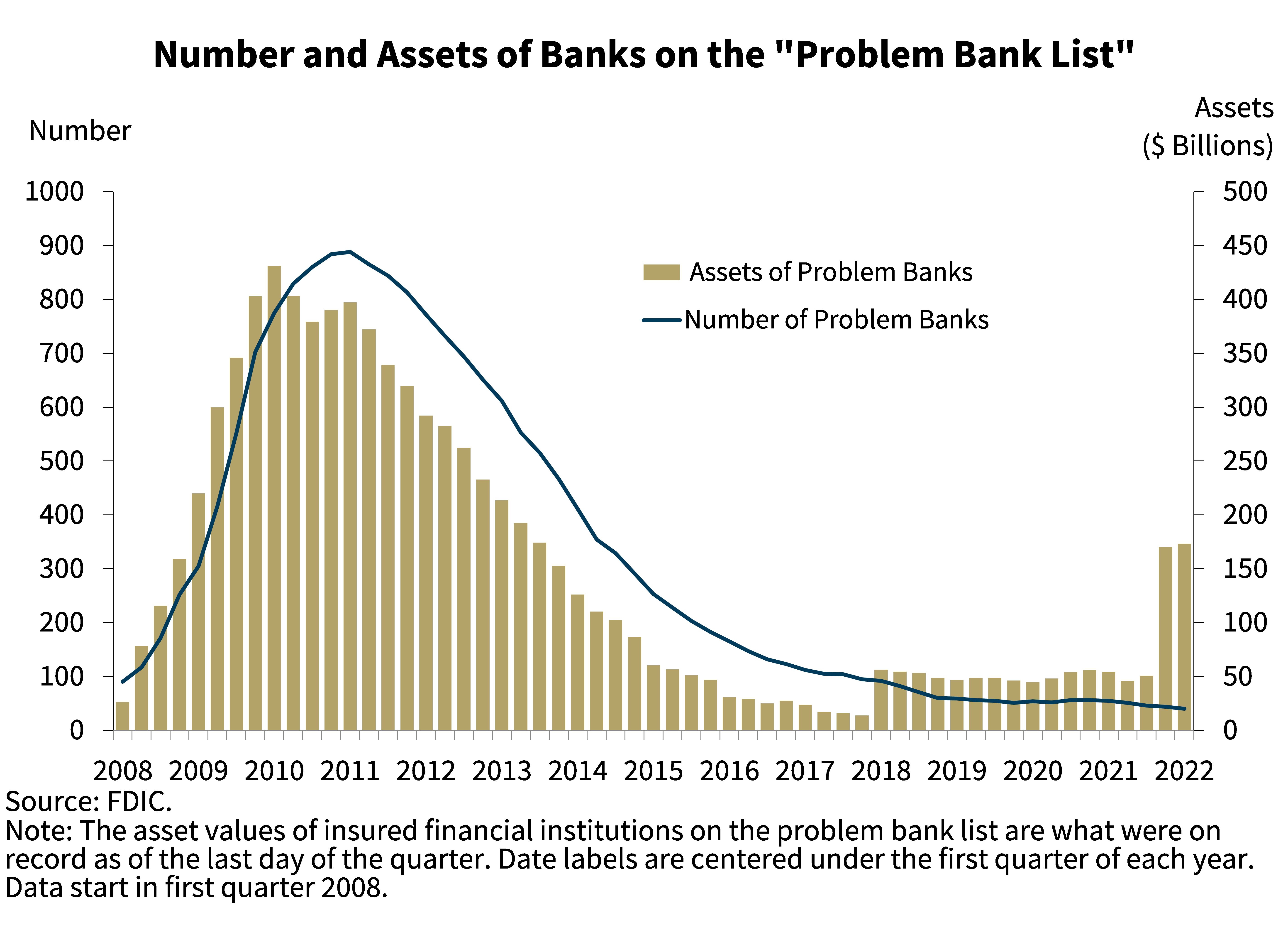 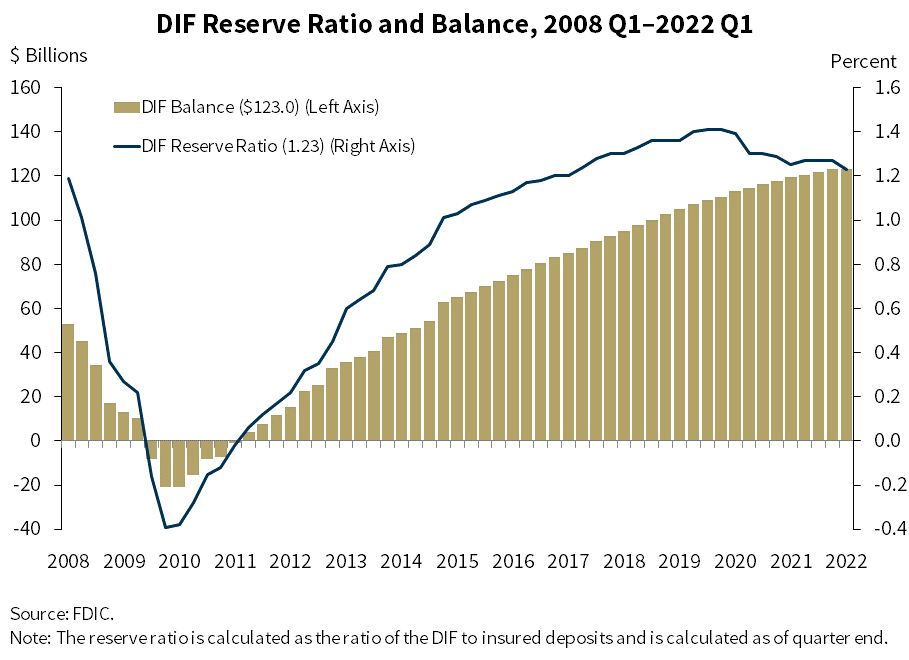 This chart shows that the DIF balance was $123.0 billion on March 31, down approximately $100 million from the end of the fourth quarter.  This was the first decline in the DIF balance in more than a decade.  Unrealized losses on available-for-sale securities in the DIF portfolio, driven by the rising rate environment, largely offset insurance assessment income.  Insured deposits increased 2.5 percent in the first quarter to $10 trillion.  These factors caused the reserve ratio—the fund balance relative to insured deposits—to fall 4 basis points to 1.23 percent as of March 31.  Even without the unrealized losses, the reserve ratio would have experienced a decline of 2 basis points due to strong insured deposit growth.  Prior to the surge of deposits related to the pandemic, the reserve ratio had not declined in any quarter since 2009. 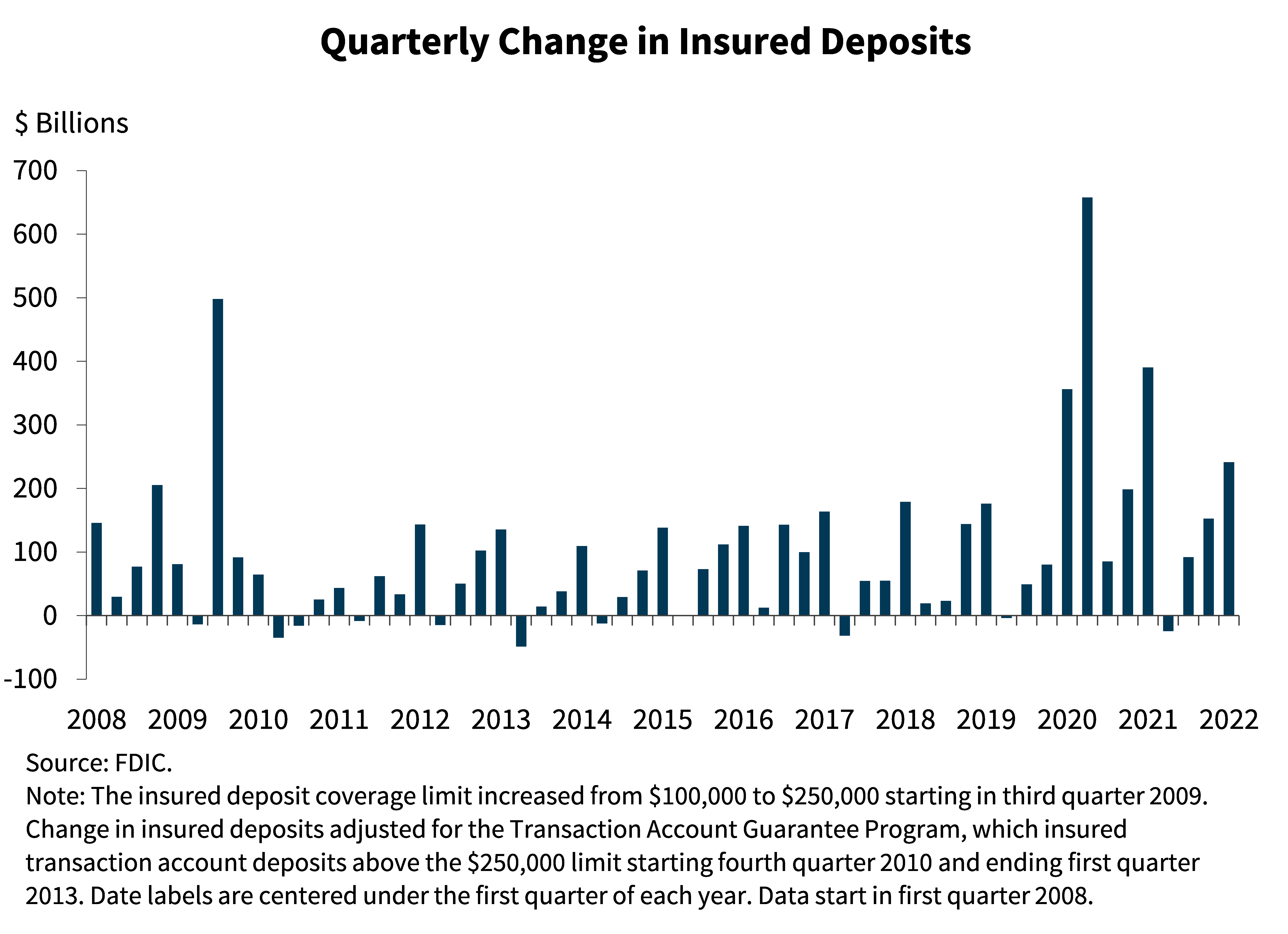 The FDIC adopted a restoration plan on September 15, 2020, that would return the reserve ratio to 1.35 percent, the statutory minimum, by September 2028 as required by law.  A key assumption surrounding the restoration plan was that insured deposit growth would normalize and the surge of insured deposits associated with the pandemic would recede over time.  However, more than one year after the most recent round of pandemic-related fiscal stimulus, the industry has continued to report strong insured deposit growth, as shown in this chart.  In fact, excluding quarters affected by the increase in insured deposit limits in 2009 and the early pandemic, insured deposits increased in the first quarter by the largest amount in at least 30 years.  The FDIC is closely monitoring the factors that affect the reserve ratio and will provide its next progress report to the Board in June.  Given continued significant growth in insured deposits, the Board will likely consider options to amend the restoration plan, including increases to assessment rates, to meet the statutory requirement by September 2028.

At the same time, the banking industry faces significant uncertainty going forward resulting from lingering sensitivities related to the pandemic, inflationary pressures, a rising interest rate environment, and geopolitical developments.  These factors could impact bank profitability, credit quality, and loan growth and will be matters of ongoing supervisory attention by the FDIC over the coming year.