“With strong capital and liquidity levels to support lending and protect against potential losses, the banking industry continued to support the country’s needs for financial services while navigating the challenges presented by the pandemic.”

WASHINGTON — Reports from the 4,951 commercial banks and savings institutions insured by the Federal Deposit Insurance Corporation (FDIC) reflect aggregate net income of $70.4 billion in second quarter 2021, an increase of $51.9 billion (281 percent) from a year ago. 1 This increase was driven by further economic growth and improved credit conditions, which led to a second consecutive quarter of aggregate negative provision expense. These and other financial results for second quarter 2021 are included in the FDIC’s latest Quarterly Banking Profile released today. 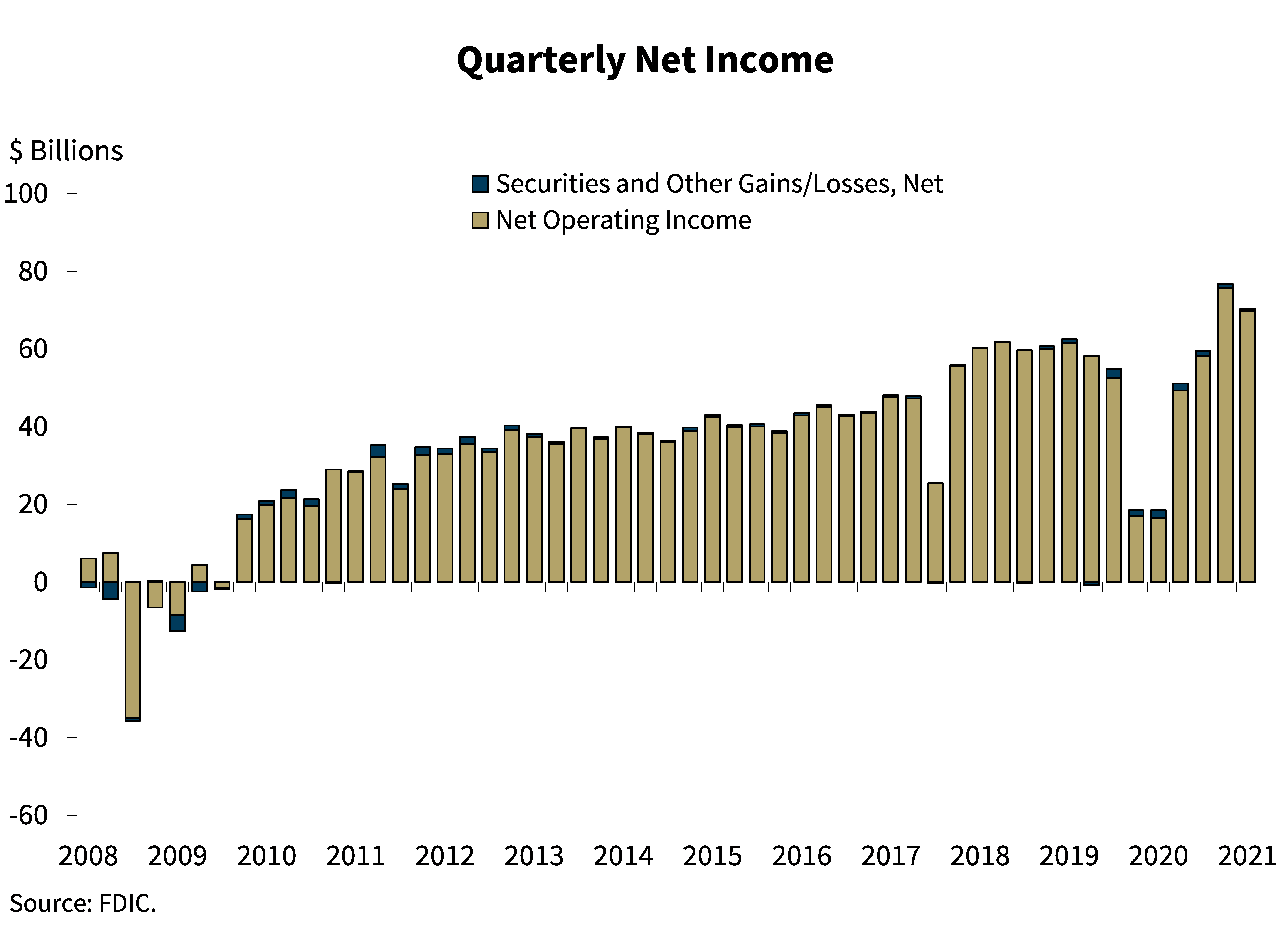 Quarterly Net Income Continued to Increase Year Over Year, Driven by a Second Consecutive Quarter of Negative Provision Expense: Net income totaled $70.4 billion, an increase of $51.9 billion (281 percent) from the same quarter a year ago, primarily due to a $73 billion (117.3 percent) decline in provision expense. Nearly two-thirds of all banks (66.4 percent) reported annual improvements in quarterly net income, and the share of profitable institutions increased slightly, up 1.4 percent year over year to 95.8 percent. However, net income declined $6.4 billion (8.3 percent) from first quarter 2021, driven by an increase in provision expense from first quarter 2021 (up $3.7 billion to negative $10.8 billion).

Net Interest Margin Continued to Contract to a New Record Low: The average net interest margin (NIM) contracted 31 basis points from a year ago to 2.50 percent—the lowest level on record. NIM contraction was accompanied by a decline in net interest income of $2.2 billion (1.7 percent) from the same quarter a year ago.

More than half (53.1 percent) of the 4,490 FDIC-insured community banks reported higher quarterly net income. However, the net interest margin for community banks narrowed further, with a decline of 26 basis points to 3.25 percent, as the continued reduction in average earning asset yields outpaced the decline in average funding costs.

Loan volume contracted slightly compared with the same quarter a year ago. A reduction in C&I loans (down 13.4 percent) drove an annual decline of $133.9 billion (1.2 percent) in loan volume.

The Reserve Ratio for the Deposit Insurance Fund Increased Slightly to 1.27 Percent: The Deposit Insurance Fund (DIF) balance was $120.5 billion as of June 30, up $1.2 billion from the end of the first quarter. The reserve ratio increased 2 basis points to 1.27 percent, due to continued growth in the fund balance and a 0.2 percent decline in insured deposits.

1 The number of FDIC insured institutions excludes two institutions that did not file Call Reports this quarter but continue to have active charters.