Good morning, and welcome to our release of second quarter 2019 performance results for FDIC-insured institutions.

In July, this economic expansion became the longest on record in the United States. With the recent lowering of short-term rates and inversion of the yield curve in the second quarter, new challenges for banks in lending and funding may emerge. The competition to attract and maintain loan customers and deposits is strong, and therefore, banks need to maintain rigorous underwriting standards and prudent risk management.

I would like to highlight that the deposit insurance fund reserve ratio reached 1.40 percent at the end of the second quarter. As a result of the reserve ratio exceeding 1.38 percent, in September the FDIC will apply credits of approximately 320 million dollars to small banks' quarterly assessment invoices.

Pat, I will turn this over to you. Thank you. 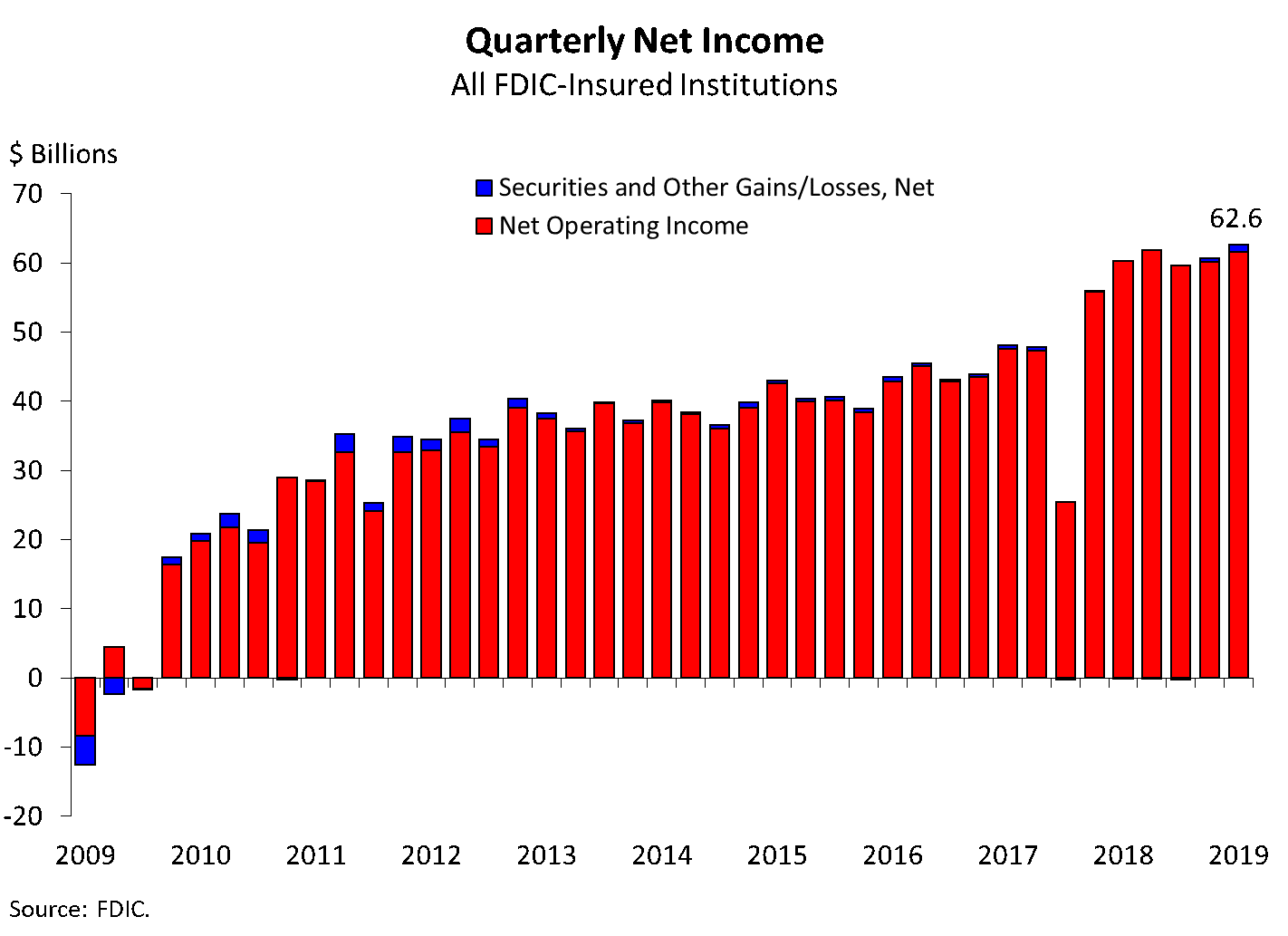 Our first chart shows that the banking industry reported quarterly net income of 62.6 billion dollars during the second quarter, an increase of 4.1 percent from a year ago. Almost 60 percent of all banks reported annual increases in net income, and less than 4 percent of institutions were unprofitable. The industry's return-on-assets ratio was 1.38 percent in the second quarter, up from 1.37 percent a year ago.

Community banks reported quarterly net income of 6.9 billion dollars in the second quarter, an increase of 8.1 percent from a year ago. 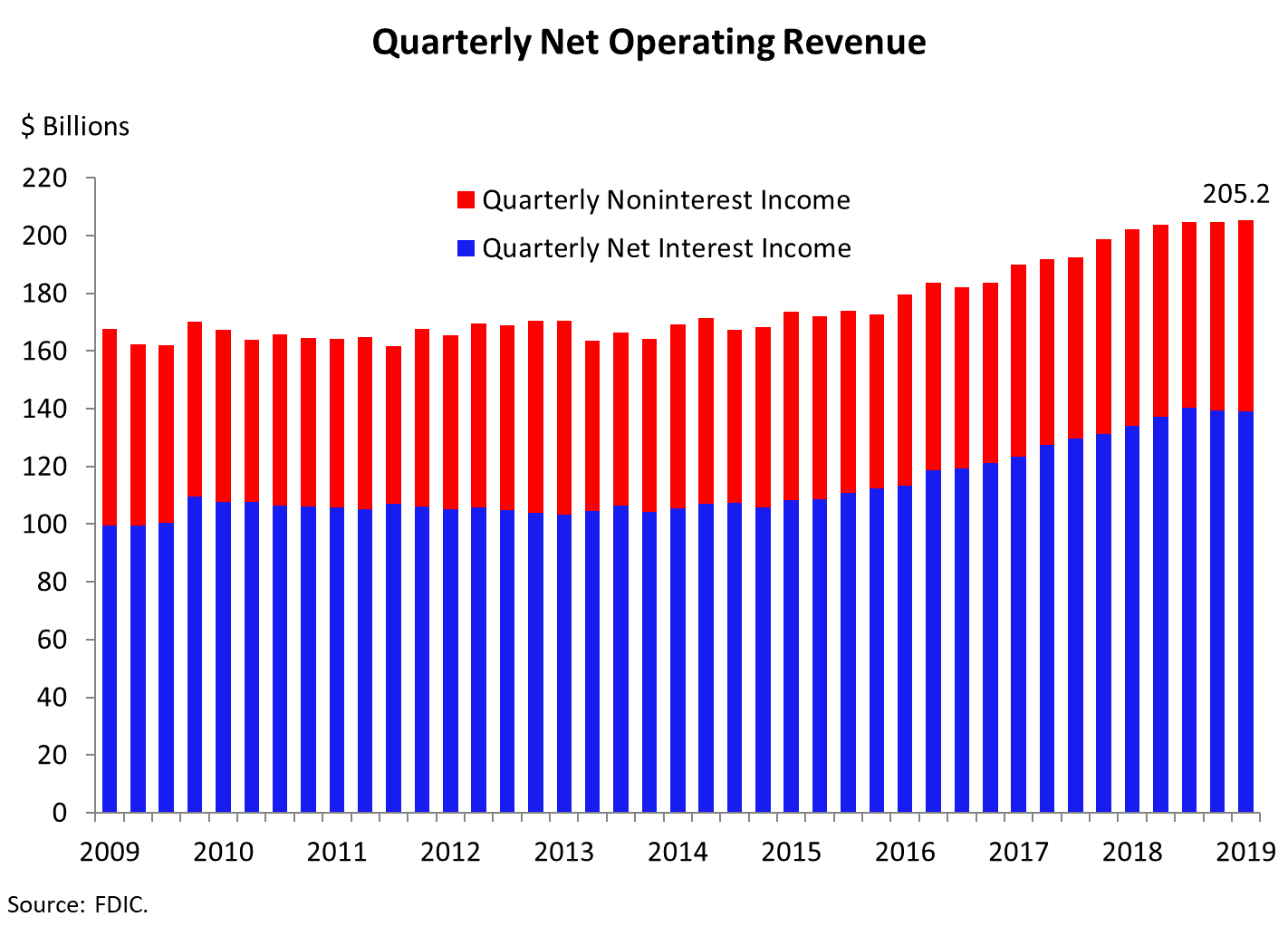 The next chart shows that net operating revenue totaled 205.2 billion dollars in the second quarter, an increase of 1.5 percent from a year ago. The growth in revenue was led by higher net interest income, which grew by 3.7 percent, as a result of loan growth and stable margins. 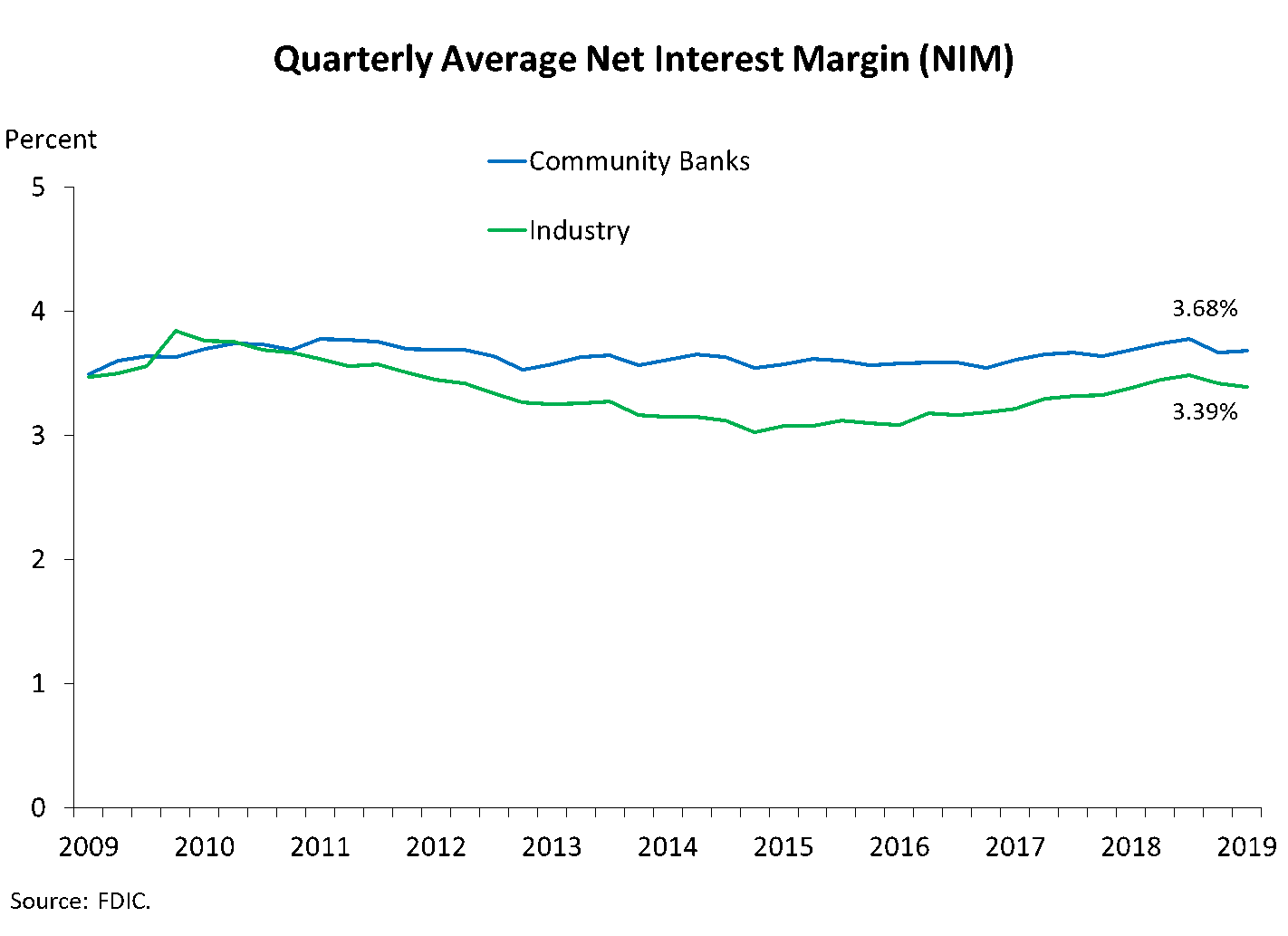 Chart 3 shows that the average net interest margin for the industry was 3.39 percent in the second quarter, down from a recent high of 3.48 percent at year-end 2018. In the first six months of 2019, the yield on earning assets has been relatively flat while the cost of funding earning assets has increased by 11 basis points.

Community banks continue to report a higher average net interest margin compared to the overall banking industry. Large institutions have benefitted more than community banks from rising short-term interest rates, as large institutions have a greater share of assets that reprice quickly. With the recent cut in short-term interest rates, we could see a reversal of this trend in the future. 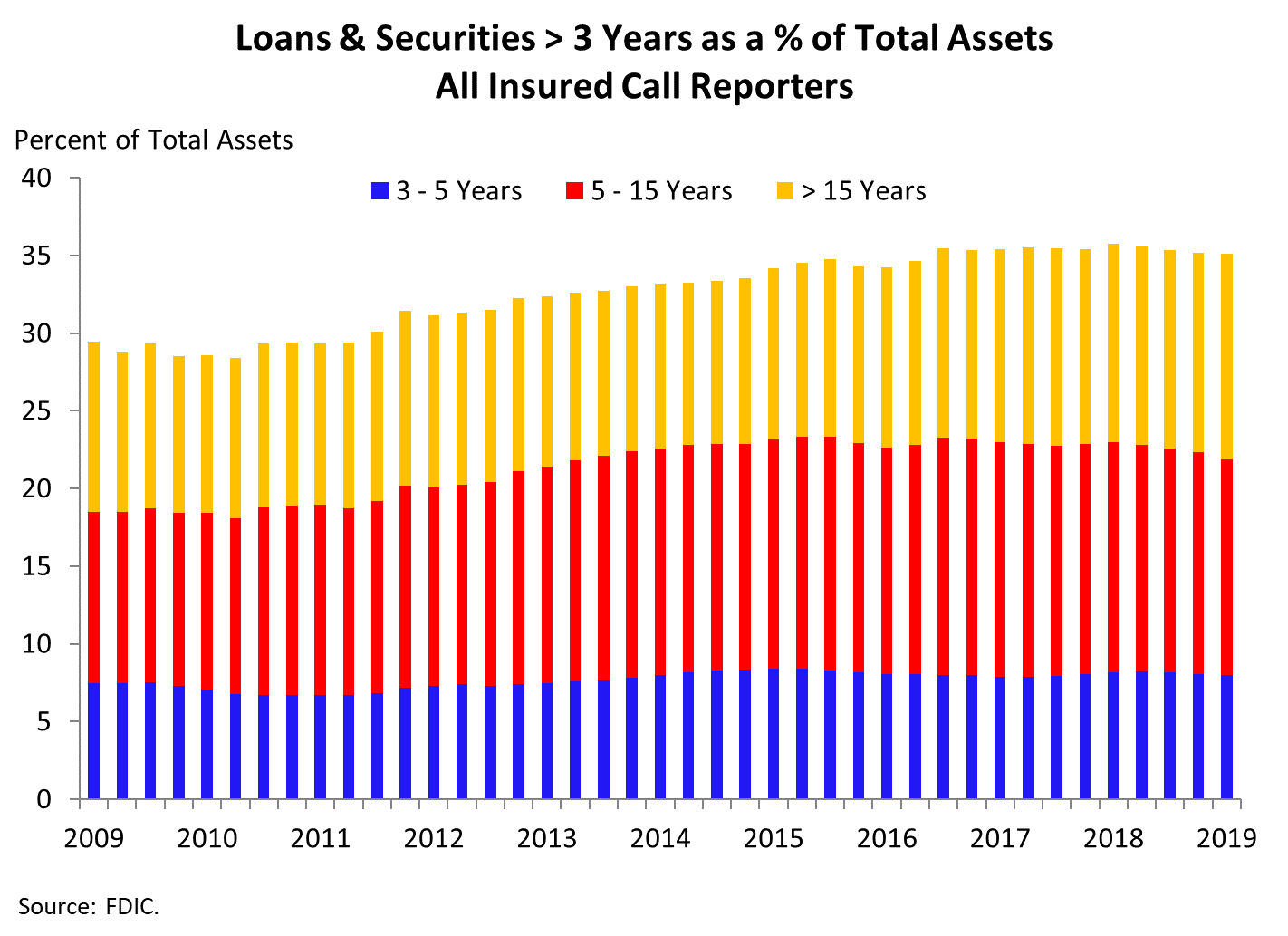 Chart 4 shows that the share of longer-term assets relative to total industry assets remains elevated, with more than one-third of industry assets maturing or repricing in three or more years.

Banks face a challenging interest rate environment. Some banks responded by "reaching for yield" through investing in longer-term assets or reducing liquid assets to increase their yield on earning assets and maintain net interest margins.

Community banks are particularly vulnerable to interest rate risk, as nearly half of their assets mature or reprice in three or more years. 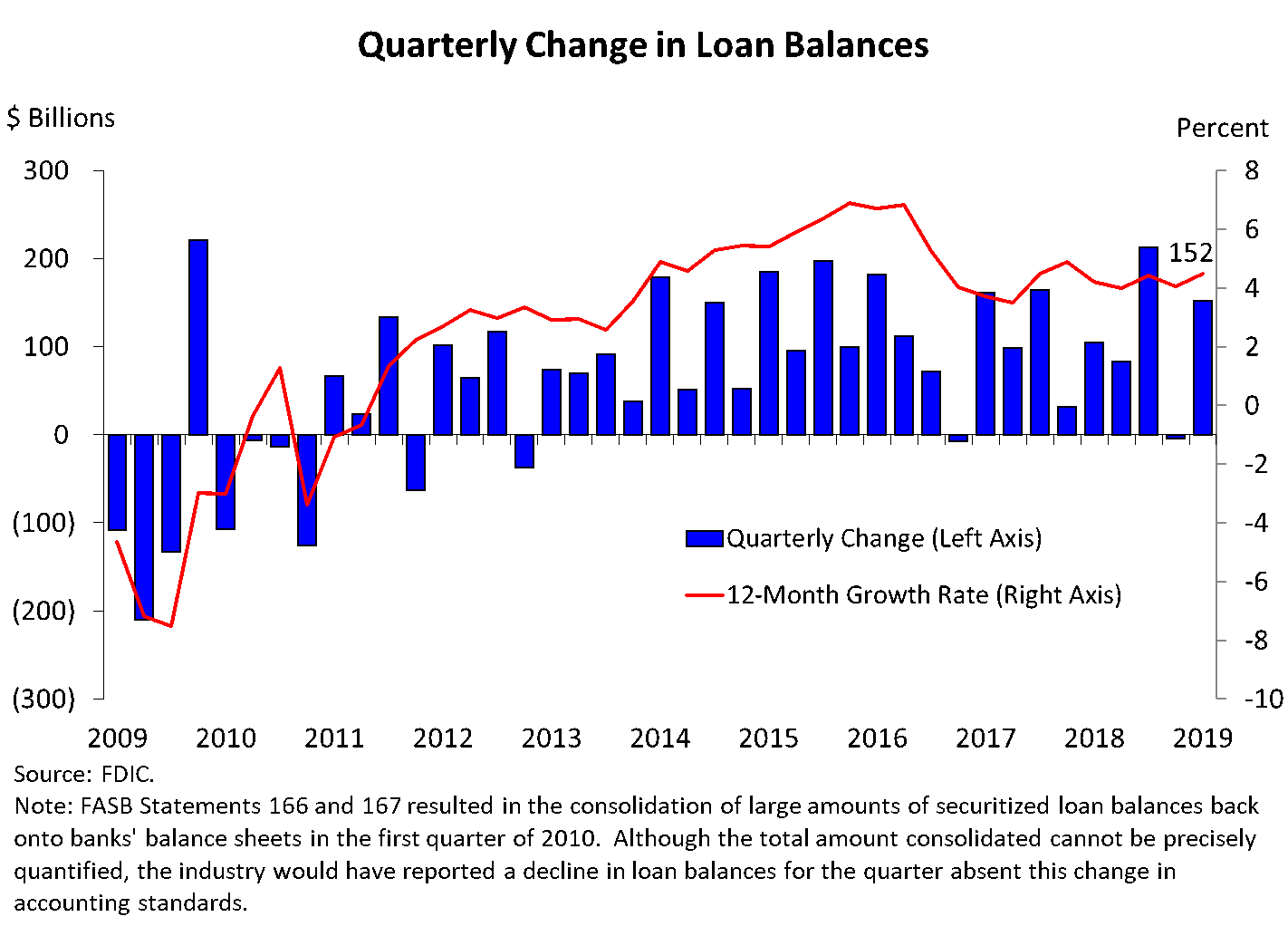 Over the past 12 months, loan balances increased by 4.5 percent, up from the 4.1 percent annual growth rate reported last quarter. Loan growth was led by commercial and industrial loans, consumer loans, and residential mortgages.

Loan growth at community banks was strong, measuring 6.3 percent from a year ago. The annual growth rate was led by commercial real estate loans, residential mortgages, and commercial and industrial loans. 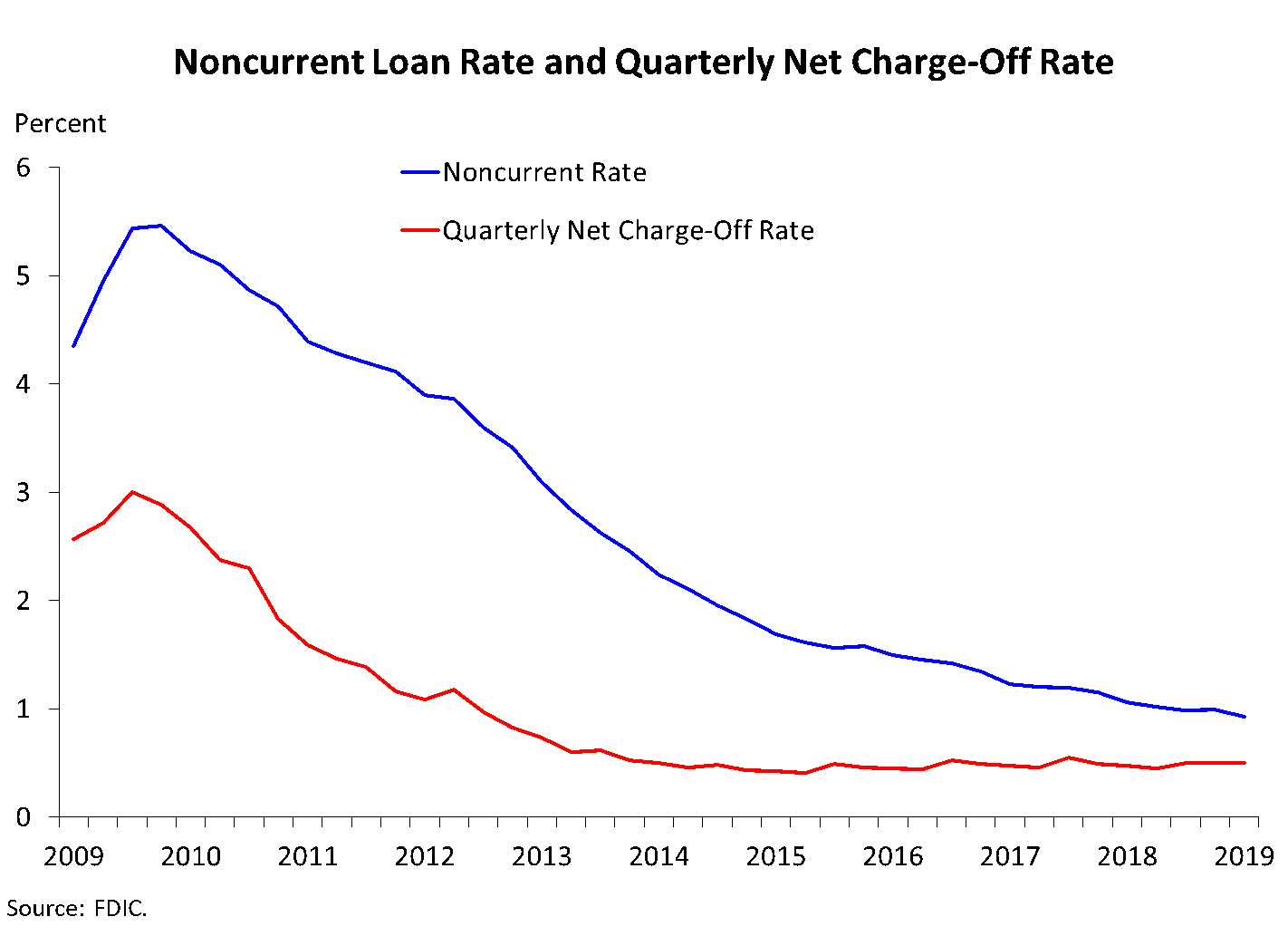 The next chart shows that overall asset quality indicators remain strong. The noncurrent rate declined from the previous quarter to 0.93 percent, while the net charge-off rate rose modestly to 0.50 percent from 0.48 percent a year ago.

Credit card balances registered the largest dollar increase in net charge-offs this quarter. The net charge-off rate for credit cards increased to 4.03 percent from 3.97 percent last quarter, but remains well below the previous high of 13.21 percent reported in first quarter 2010. 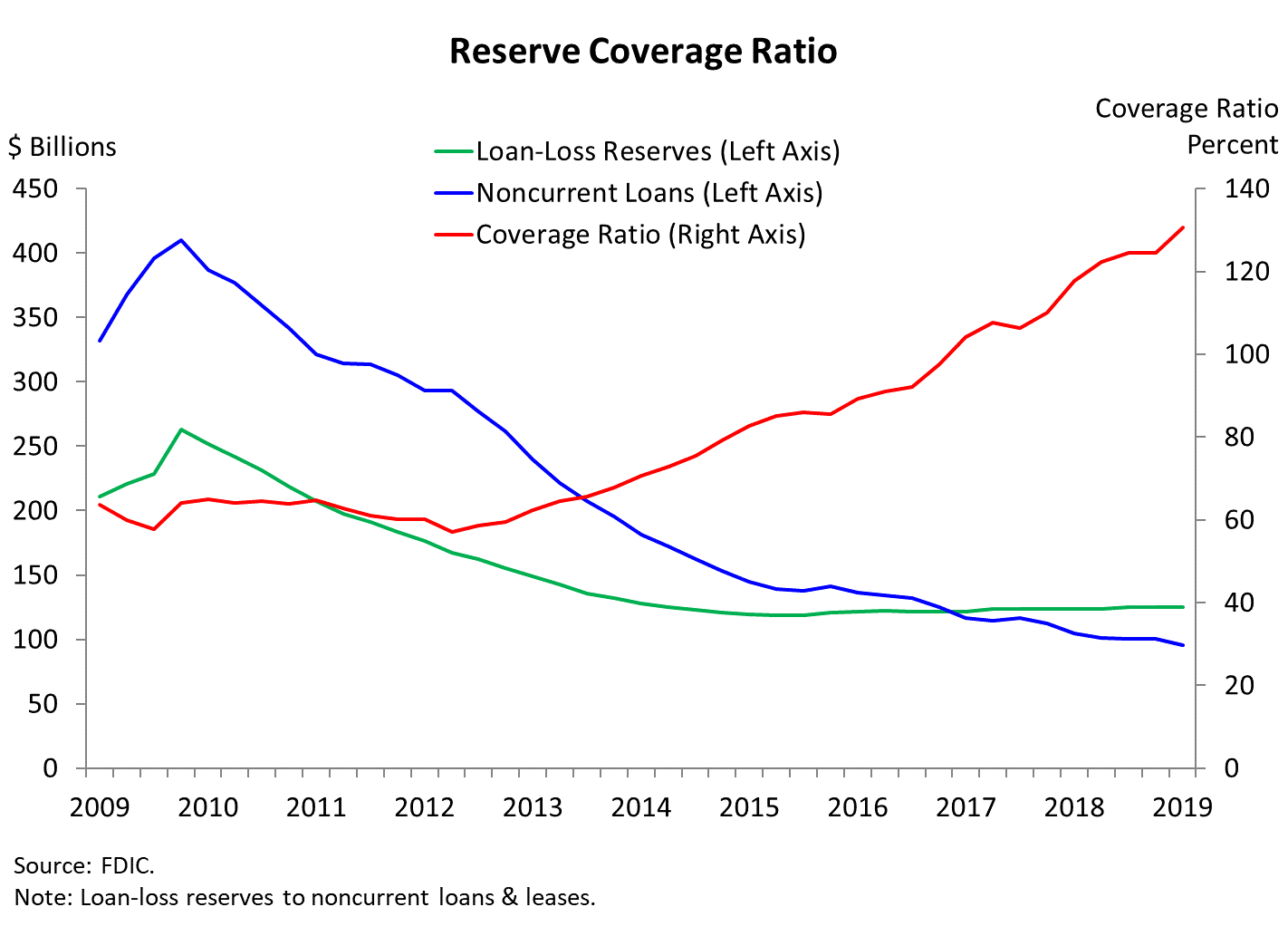 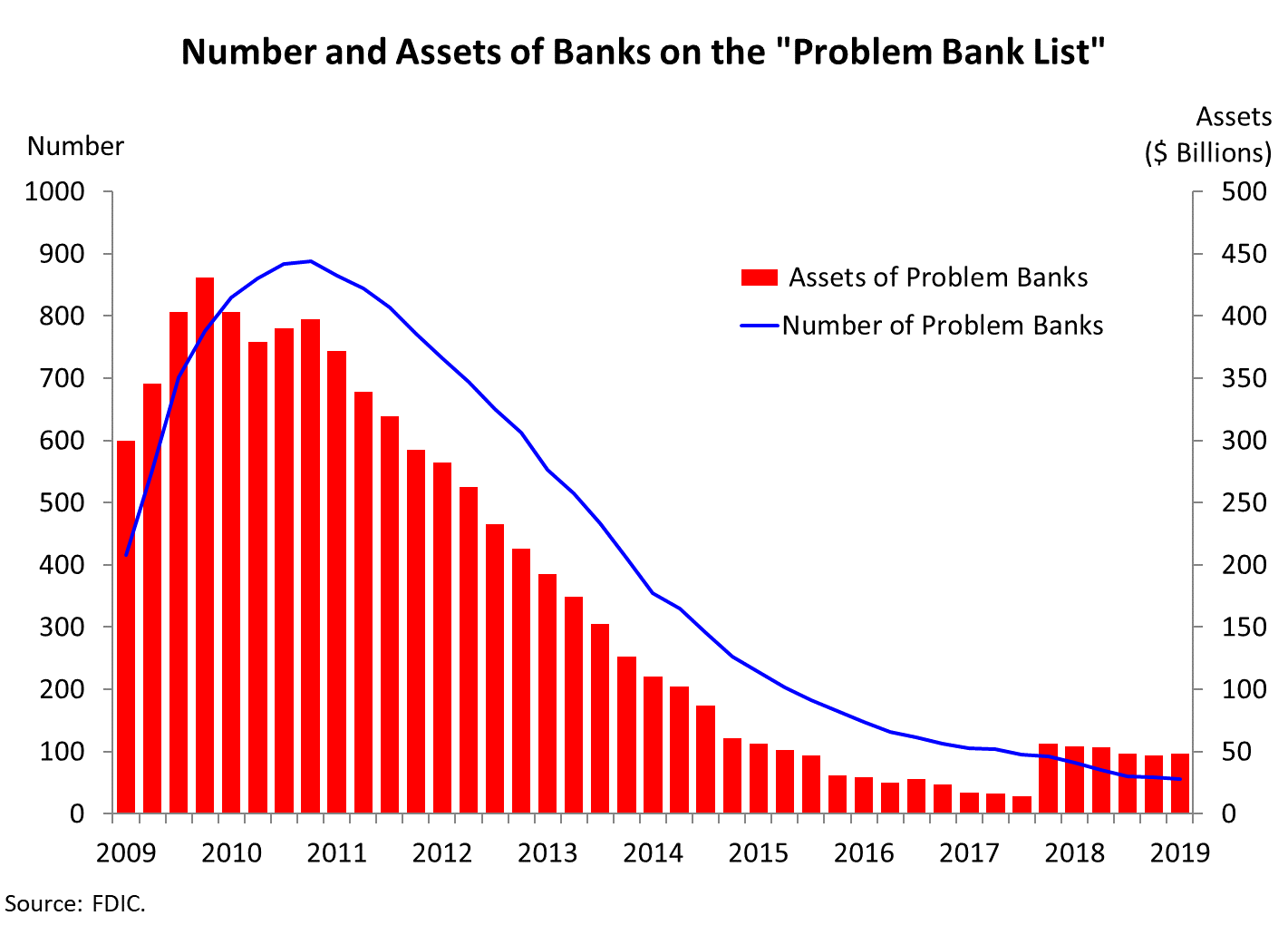 Chart 8 shows that the number of banks on the FDIC's "Problem Bank List" declined from 59 to 56 during the quarter. This is the lowest number of problem banks since first quarter 2007. Five new banks opened and one bank failed in the second quarter. 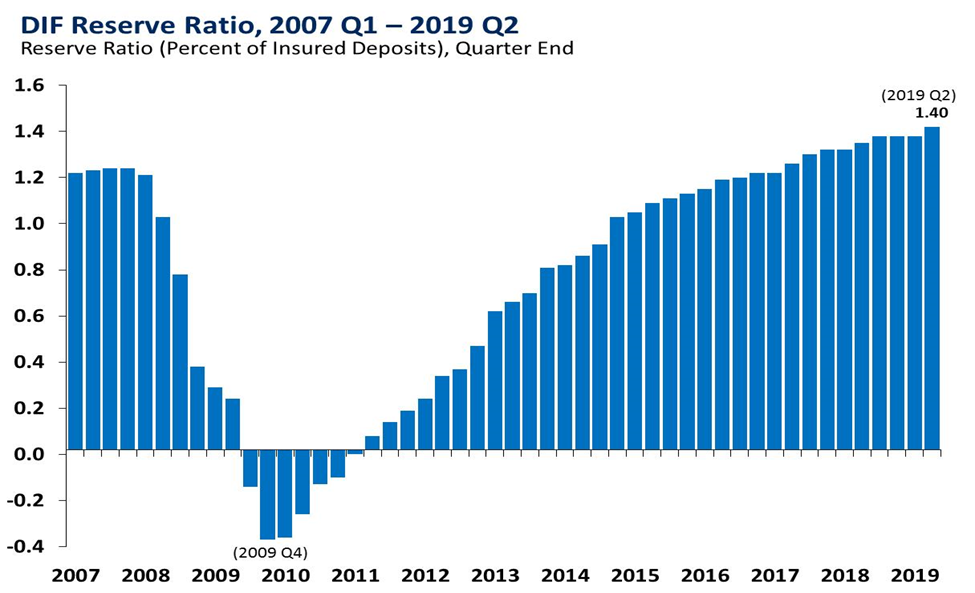 The Deposit Insurance Fund balance was 107.4 billion dollars on June 30, up 2.6 billion dollars from the end of last quarter. Assessment income was the largest contributor to the increase in the fund, but unrealized gains on securities held by the DIF and a reduction in losses from past failures were also significant contributors. Estimated insured deposits were 7.7 trillion dollars at the end of June, a decrease of 0.1 percent from last quarter, but an increase of 4.6 percent over the past four quarters.

Chart 9 shows that the reserve ratio—the amount in the Deposit Insurance Fund relative to insured deposits—rose to 1.40 percent at the end of June, an increase of 4 basis points from last quarter.

Small banks earned a total of 765 million dollars in credits for the portion of their assessments that contributed to growth in the reserve ratio from 1.15 percent to 1.35 percent. The credits are automatically applied to offset the assessments of small banks when the reserve ratio is at least 1.38 percent. Therefore, as the Chairman previously mentioned, in September the FDIC will apply approximately 320 million dollars of credits to offset the second quarter assessments of small banks.

We will now answer any questions you may have regarding second quarter performance of the banking industry.