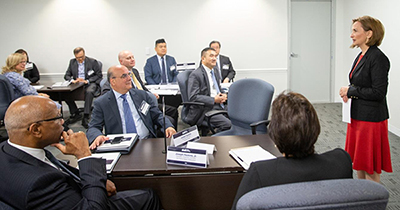 Collaboration among MDIs, or between MDIs and non-MDIs, can result in sound and profitable lending and investments that meet the needs of underserved communities. In addition, institutions engaging in such collaboration and partnerships may receive Community Reinvestment Act (CRA) consideration for these activities.

In 2019, the FDIC hosted three roundtables with large bank representatives and MDI bankers to foster collaboration in support of the continued vibrancy of MDIs and their communities. During the roundtables, executives from 29 large banks and 24 MDIs discussed potential partnerships including financial support, lending activities, or service activities including technical assistance.

On June 27, 2019, the FDIC held its first roundtable for FDIC’s New York Region. Other roundtables were held in Atlanta on October 17, 2019, and Chicago on November 7, 2019. "Collaborative partnerships among large banks and MDIs are critically important, not only for individual insured institutions, but also for their communities and the vitality of the overall financial system," said FDIC Chairman Jelena McWilliams during the New York Roundtable.

In 2020, the FDIC is continuing its series of Large Bank – Minority Depository Institution Roundtables across the country. For more information about upcoming roundtables, please contact your MDI Regional Coordinator.

The FDIC has created several resources that describe ways that financial institutions, including community banks, can partner with MDIs to the benefit of all institutions involved, as well as the communities they serve.

PDF Help - Information on downloading and using the PDF reader. .