I think of Maggie Lena Walker as the friend I first met in October of 2017. Though she was long passed, I speak of her often to my friends and coworkers. Born near the end of the Civil War, Maggie was the daughter of a former slave who became an entrepreneur, a newspaper publisher, a banker—a pillar in her community. 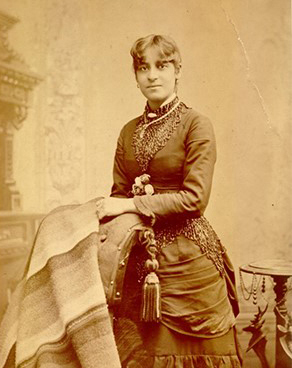 I first made Maggie’s “acquaintance” on a trip to Richmond, Virginia with my husband. As amateur history buffs, we try to plan trips to discover the history of the places we visit. And so it was that during that October trip, we happened upon Maggie, and I’ve been telling her story ever since.

As we entered her home on Leigh Street and walked into her parlor, I felt as if she were alive today, and I was intrigued. As I learned more, I wanted to honor her life and legacy.

Maggie Lena Walker challenged the social rules of her time in a place that was once the seat of the Confederacy through entrepreneurship, activism, and fervent speeches.

In 1903, she became the first African American woman to found and charter a bank in the United States, serving as its president and using her standing to foster self-sufficiency and economic empowerment in her community.

Maggie’s involvement with the African American community began early. Her mother, Elizabeth Draper Mitchell, was a former slave freed before the Civil War by Richmond’s Van Lew family. The Van Lews were Quakers who did not believe in slavery. Elizabeth remained with the family after being freed, working in various roles, including as a laundress.

Maggie later said: “I was not born with a silver spoon in my mouth, but with a laundry basket practically on my head.” Within this context, Maggie was introduced to the community of African American women who worked as laundresses and who used their time together to discuss solutions to community problems.

Maggie also learned about her community as a member of the First African Baptist Church of Richmond. During her high school years, she joined a fraternal organization, Good Idea Council #16 of the Independent Order of the Sons and Daughters of St. Luke. Fraternal organizations were important to the community, fostering self-help, moral values, and mutual support such as aid to the elderly. St. Luke’s would play a critical role throughout Maggie’s life.

After three years as a school teacher, Maggie married Armstead Walker in 1886, whose father owned a prosperous bricklaying and construction business. They had three sons; one unfortunately died in infancy. The Walkers also adopted Armstead’s distant cousin, Polly, who managed housekeeping and child care while the Walkers worked. 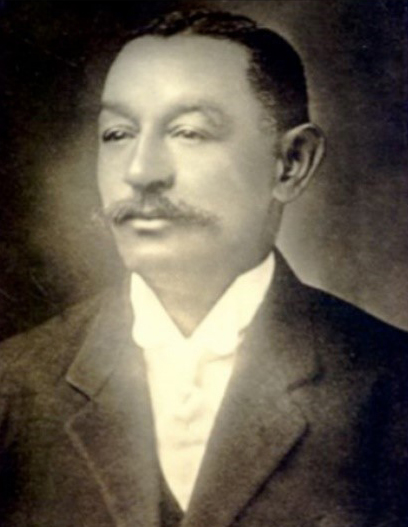 In 1885, Maggie co-initiated the Juvenile Division within St. Luke’s, dedicated to instilling pride, thrift, and responsibility among the community’s children. She became the organization’s leader. Through this organization, Maggie created leadership roles for women members of St. Luke’s. 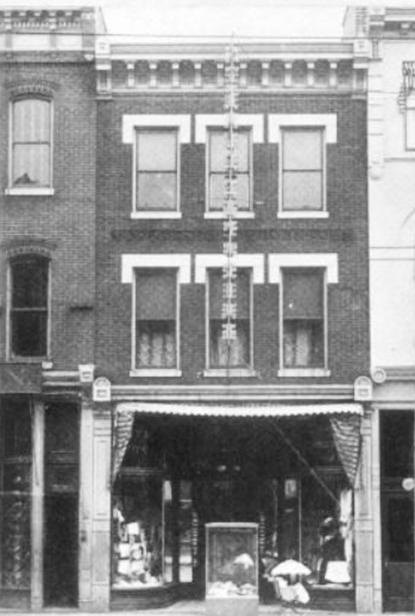 But that was just the beginning. By 1899, St. Luke’s was suffering financially. Maggie had advanced to the Order’s top leadership position and saw an opportunity to turn St. Luke’s fortunes around. She undertook membership drives that would eventually yield new members in 22 states. She set out on a speaking circuit telling captivating stories that urged economic independence. Recognizing the context of her times, she urged economic empowerment as a means for uplifting her race. For Maggie, this included encouraging women to enter business and black consumers to support African American enterprise.

The Herald continued to grow in the years that followed, becoming a profitable printing business. It published outspoken editorials and highlighted the position of black women.

Maggie made a bold but carefully planned move into banking. John P. Branch, former President of Merchant’s National Bank of Richmond and a member of the American Bankers Association, arranged for Maggie to apprentice at his institution a few hours a day in order to learn banking and accounting skills. When the St. Luke Penny Savings Bank opened in late 1903, “Maggie became the first African American woman to found, charter, and serve as president of a bank in the United States.” St. Luke’s also became the fourth black bank in Richmond.

The bank opened with more than $9,000 in deposits. Within three years, St. Luke’s had deposits totaling $170,000, giving the bank the ability to make loans to black homeowners and businesses. By 1920, the bank financed more than 600 home loans to residents in Richmond’s predominantly black Jackson Ward community.

In 1904, the Order purchased a building on Broad Street to house its new department store and moved the bank into the store.

In 1929, the stock market crash prompted Maggie to adeptly lead a merger between her bank and two other black-owned banks in Richmond. She went on to serve as Chairman to the Board of Directors for the new bank, known as Consolidated Bank and Trust, a position she would hold until her death in 1934.

Because of Mrs. Walker’s business acumen, Consolidated Bank and Trust continued into the 21st century. After being acquired in 2005 by Abigail Adams National Bank (a woman-owned bank in Washington, D.C.), Consolidated’s run as a black-operated, independently owned bank ended. In 2009, Premier Bank of West Virginia merged with Abigail Adams, and Consolidated was later renamed Premier Bank. Premier operates today at 1st and Marshall Streets in Richmond. As a tribute to its history, the Consolidated signage also remains.

Maggie purchased a home in 1904 on Leigh Street for $4,800. She was married at the time, but decided to keep the deed in her name since the purchase was made with her money. After a remodel, she moved into the house a year later with her husband, Armstead; her mother, Elizabeth Draper Mitchell; her sons, Russell and Melvin; and her adopted daughter, Margaret “Polly” Anderson Payne. Eventually, her daughters-in-law and grandchildren would occupy the home as well. Maggie enjoyed entertaining, and among her guests were such prominent individuals as Langston Hughes, W.E.B. DuBois, and Mary McLeod Bethune. After Mrs. Walker’s death in 1934, her daughter-in-law, Hattie, inherited the house and remained there until 1971. In 1978, her granddaughter, Maggie Laura, deeded the house to the National Park Service. 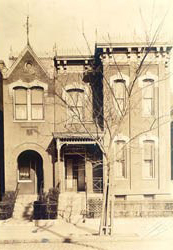 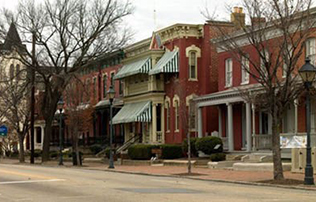 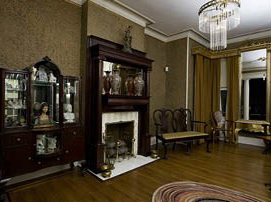 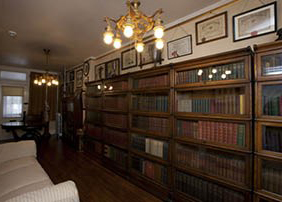 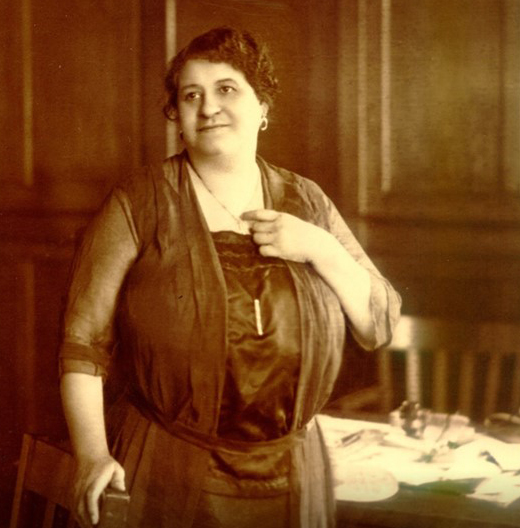 Maggie Walker at the Bank

Mrs. Walker died on December 15, 1934, at the age of 70. Despite cold and rainy conditions, her funeral was one of the largest in Richmond, causing streets to be rerouted. With flags around town at half-staff, city residents, school children and even Richmond’s mayor turned out to honor her life and contributions. Her procession began at her home and passed by her church before coming to her final resting place at Evergreen Cemetery.

Fortunately, the remarkable story of my friend remains alive. Among other things, her life is honored by a prestigious high school in Richmond known as the Maggie L. Walker Governor's School for Government and International Studies. Also, a middle school in Brooklyn, New York, bears her name, as do streets in Richmond and Newport News, Virginia.

In 1978, her Richmond home became a National Historic Site, a proper way to preserve her as one of our national treasures. The city of Richmond also sets aside October to honor Mrs. Walker annually. Additionally, July 15, 2017, served as Dedication Day of the Maggie L. Walker Memorial Plaza in her hometown, Richmond, Virginia. In the plaza stands a 10-foot statue of Maggie Walker in all her glory. It is a reminder of one of Walker’s quotes about determination and perseverance: “Have faith, have hope, have courage and carry on.”

My friend Maggie was a rousing woman whose legacy remains and continues to speak to me personally. As the daughter of a formerly enslaved African American widow, Maggie applied lessons from her mother to what became an astounding career in business and social activism. She realized enormous accomplishments despite barriers imposed because of her race and sex. Under her leadership of the Independent Order of St. Luke, she showed that black men and especially women could be leaders in business, politics, and education during a time when society insisted they could not. The building which housed St. Luke’s Hall remains in Richmond as a registered, national historic landmark.