Good morning, and welcome to our release of full-year and fourth quarter 2021 performance results for FDIC-insured institutions.

The banking industry reported an increase in full year 2021 income primarily due to negative provision expense in all four quarters of the year.  Fourth quarter income improved from a year ago due to higher net interest income and continued negative provisions.  The net interest margin for the industry remained stable from the prior quarter but declined 12 basis points from the year-ago quarter.  Furthermore, the banking industry reported broad-based increases in total loan balances, improved credit quality, and strong capital levels.

With strong capital and liquidity levels to support lending and protect against potential losses, the banking industry continued to support the country’s credit needs while navigating the challenges presented by the pandemic.

The Deposit Insurance Fund (DIF) balance was $123.1 billion on December 31, up $1.2 billion from the end of the third quarter.  However, the reserve ratio was unchanged at 1.27 percent as growth in insured deposits remained strong this quarter.

Despite the positive trends, several challenges persist for the banking industry.  The trajectory of the pandemic and its longer-term economic and banking industry effects remain uncertain.  In addition, rising interest rates and geopolitical uncertainty could negatively affect bank profitability, credit quality, and loan growth going forward. In particular, rising interest rates could adversely  impact real estate and other asset values and borrowers’ repayment abilities.  These will be matters of ongoing supervisory attention by the FDIC over the coming year. 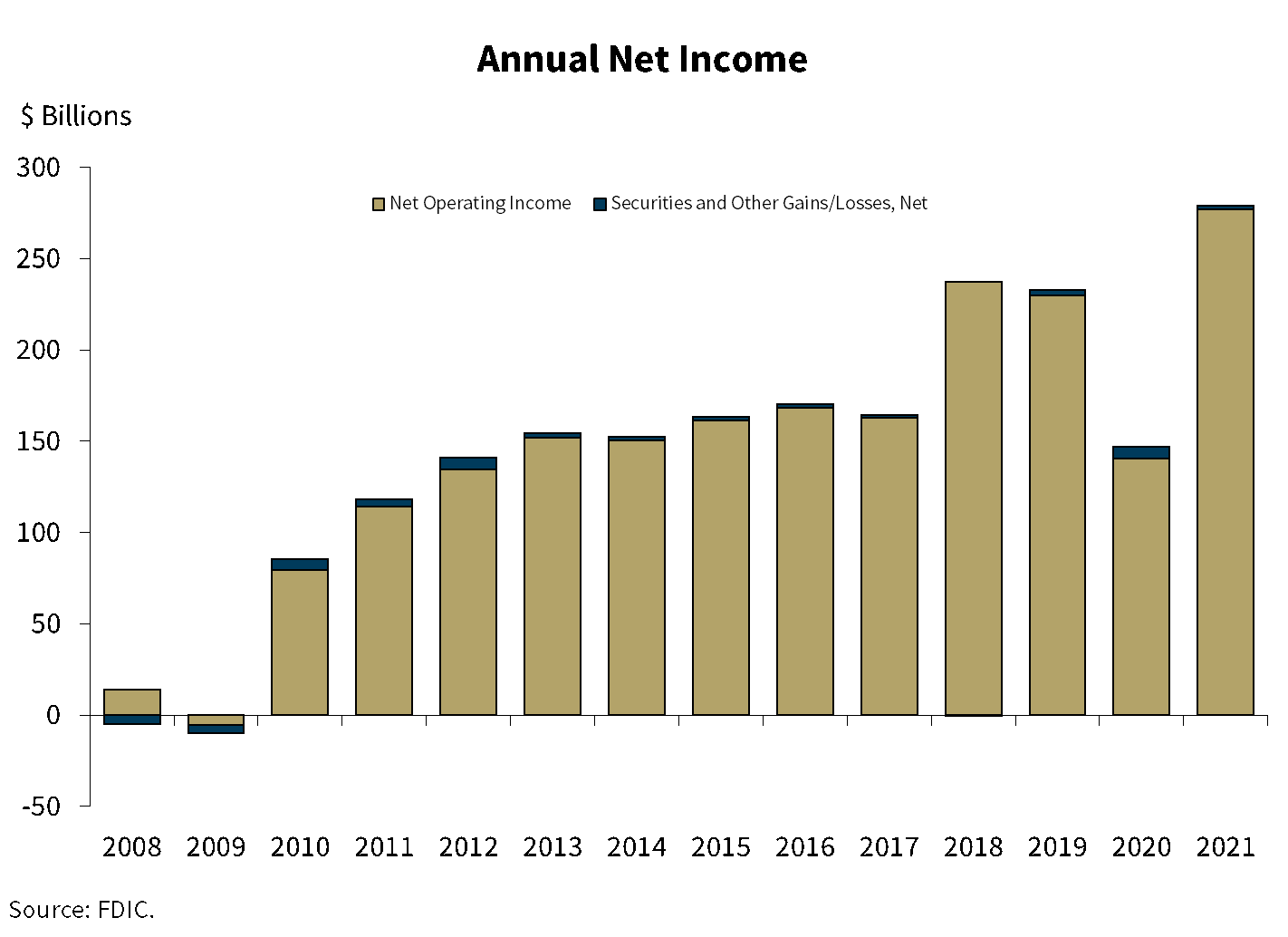 Community banks reported annual net income of $32.7 billion in 2021, up 29.3 percent from 2020.  The improvement was attributable to higher net interest income, which increased by $6.8 billion, and lower provisions, which were down $6.0 billion. 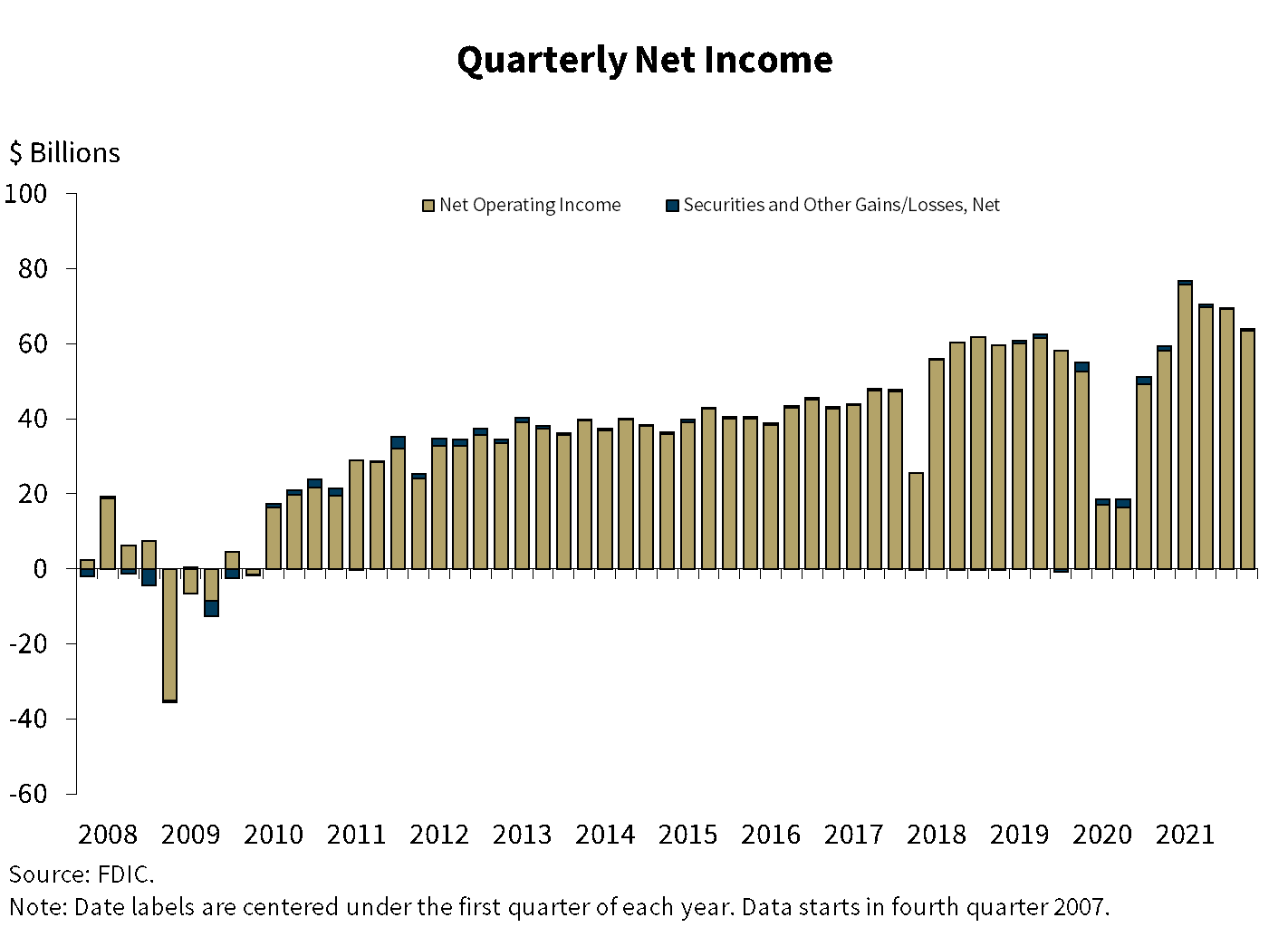 As seen in this chart, the banking industry reported net income of $63.9 billion this quarter, up $4.4 billion from fourth quarter last year.  A majority of banks reported higher net income this quarter relative to a year ago.  The industry aggregate return on assets ratio was 1.09 percent, on par with the rate of 1.10 percent reported in fourth quarter 2020.

The primary driver of higher net income this quarter was an increase in net interest income.  Interest expense declined $3.8 billion and interest income increased $2.0 billion from one year ago, particularly from growth in securities portfolios.  Provision expense for the banking industry totaled negative $742.4 million in fourth quarter.  This was $4.0 billion less than one year ago and also boosted net income. 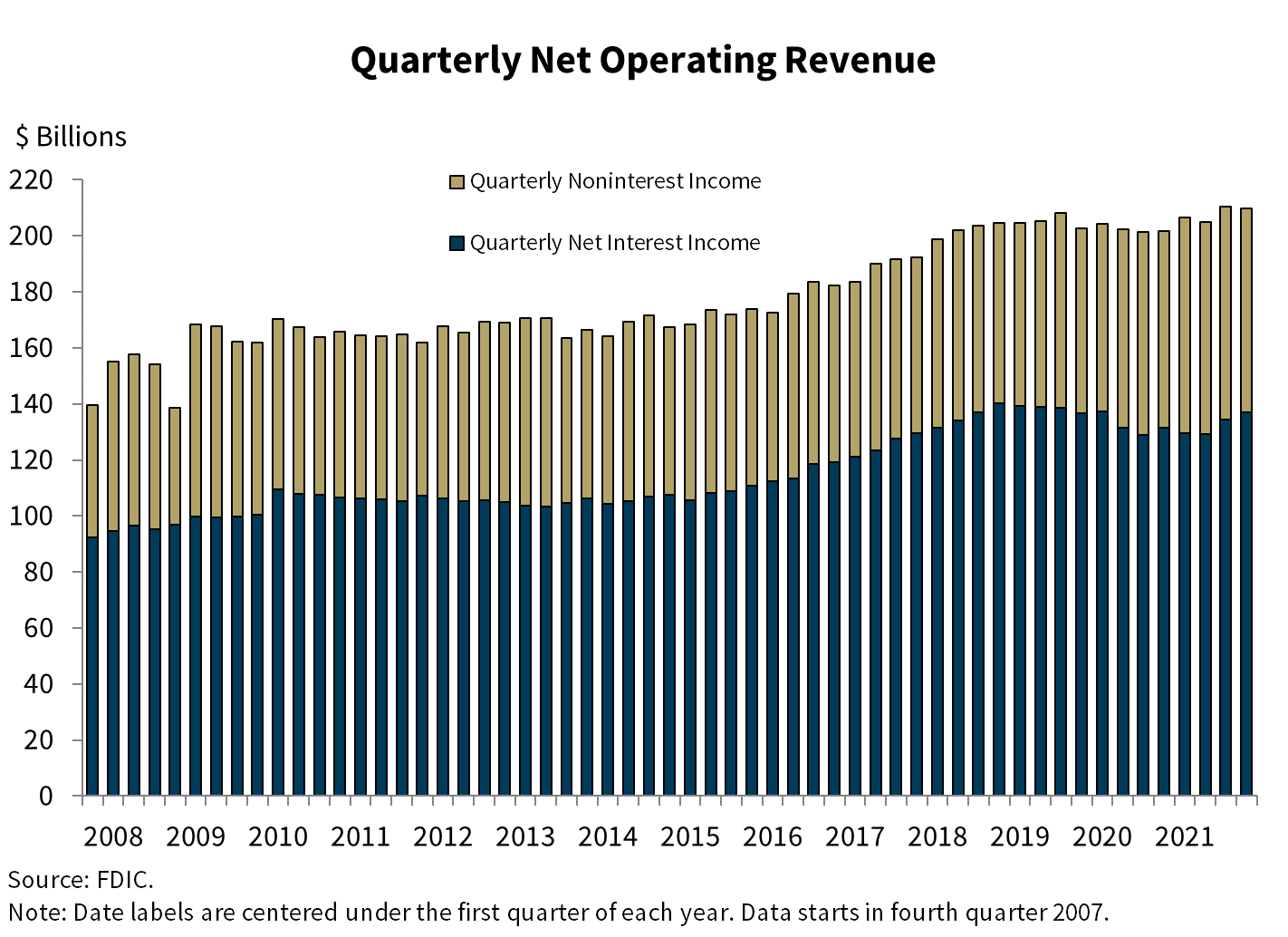 Our next chart shows that quarterly net operating revenue increased 4.0 percent from fourth quarter 2020 to $209.8 billion.

Noninterest income rose by $2.4 billion from a year ago.  Higher revenue from investment banking fees and trading revenue drove the year-over-year increase. 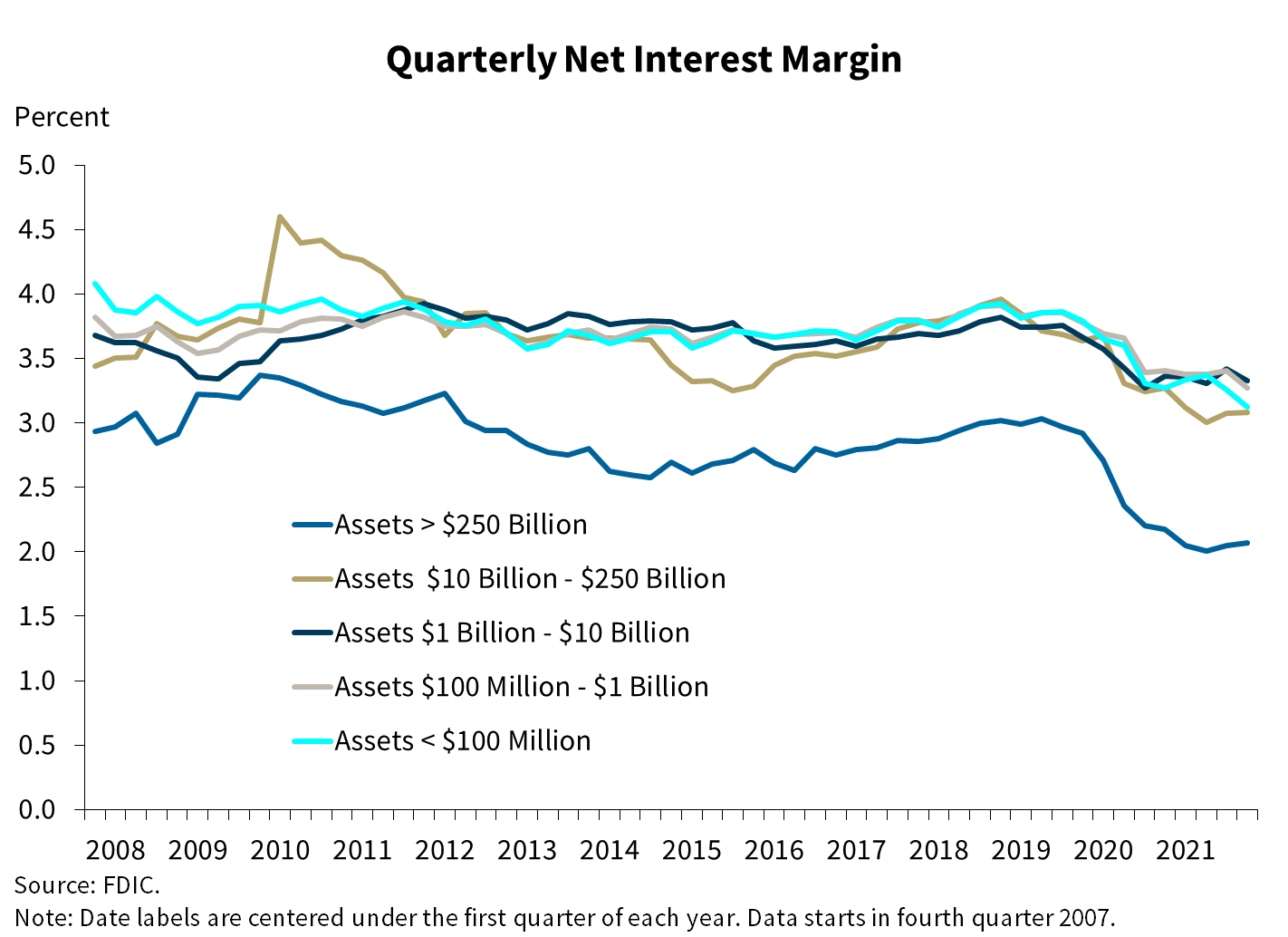 The next chart shows that the net interest margin (NIM) for the industry remained stable from the prior quarter at 2.56 percent.  However, NIM is 12 basis points lower than the year ago level.

The NIM for community banks declined, narrowing 11 basis points from the same quarter a year ago to 3.22 percent. 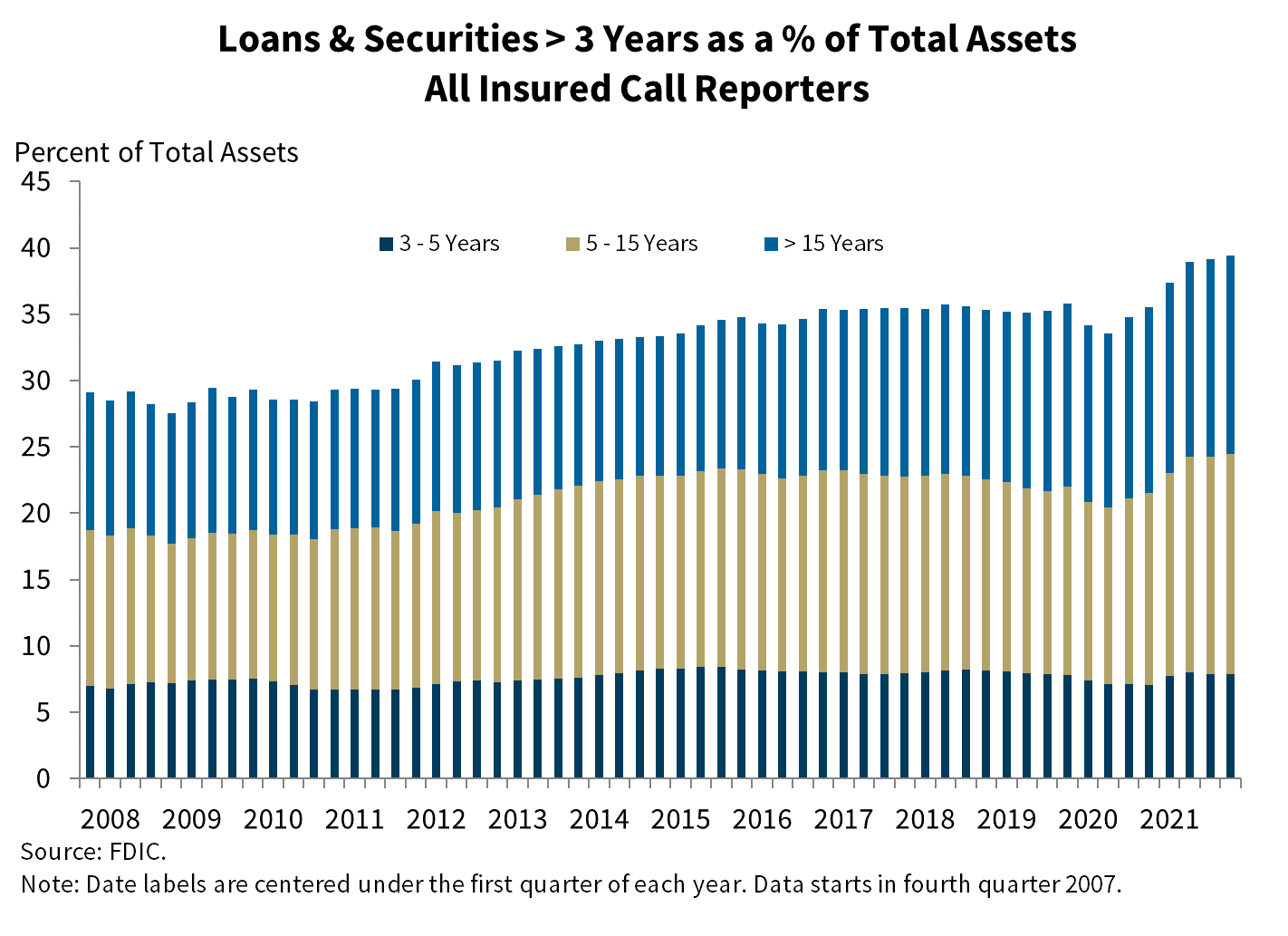 Community banks have also increased their holdings of assets with maturities greater than three years, which now total 52.2 percent of total assets. 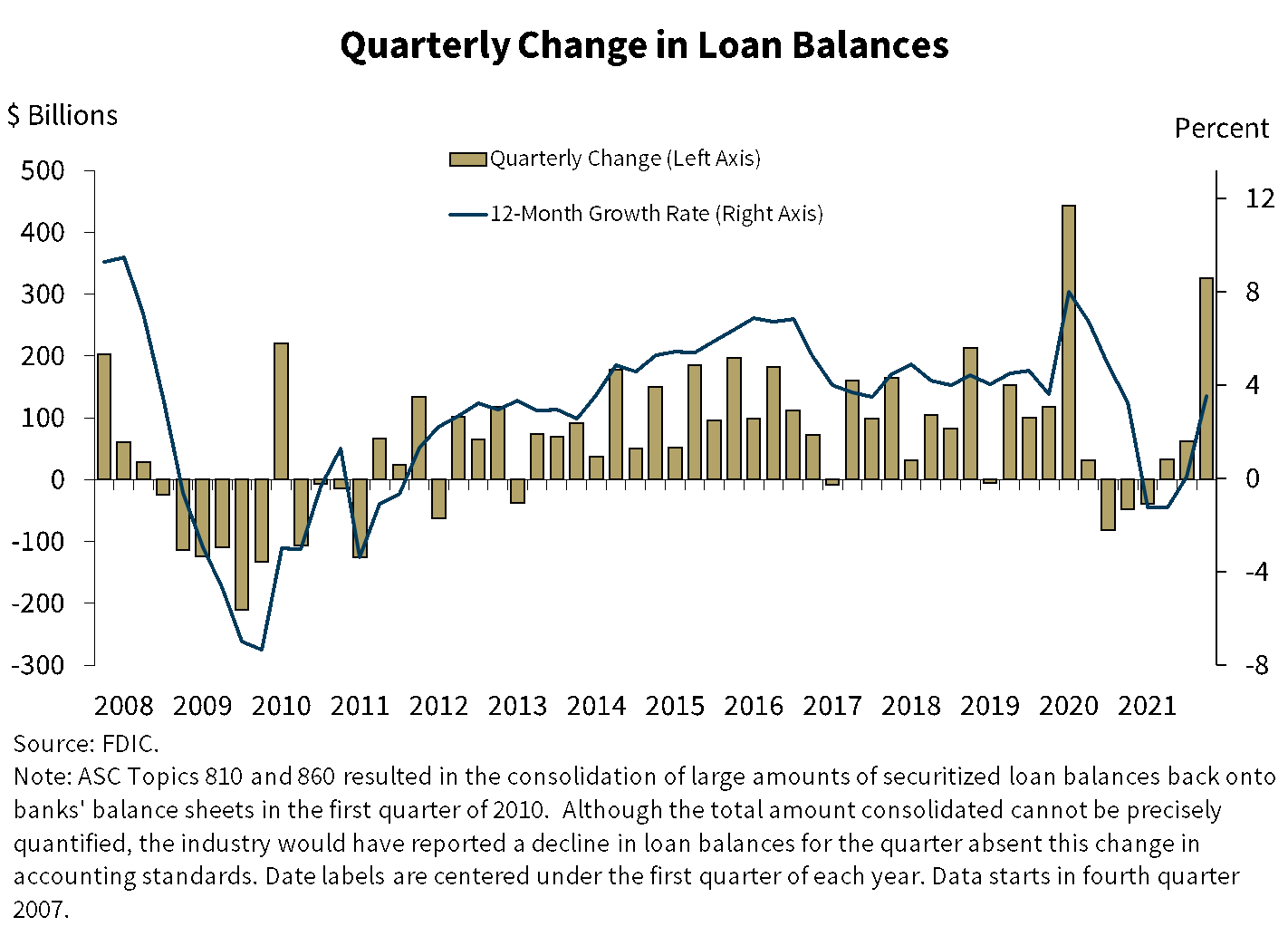 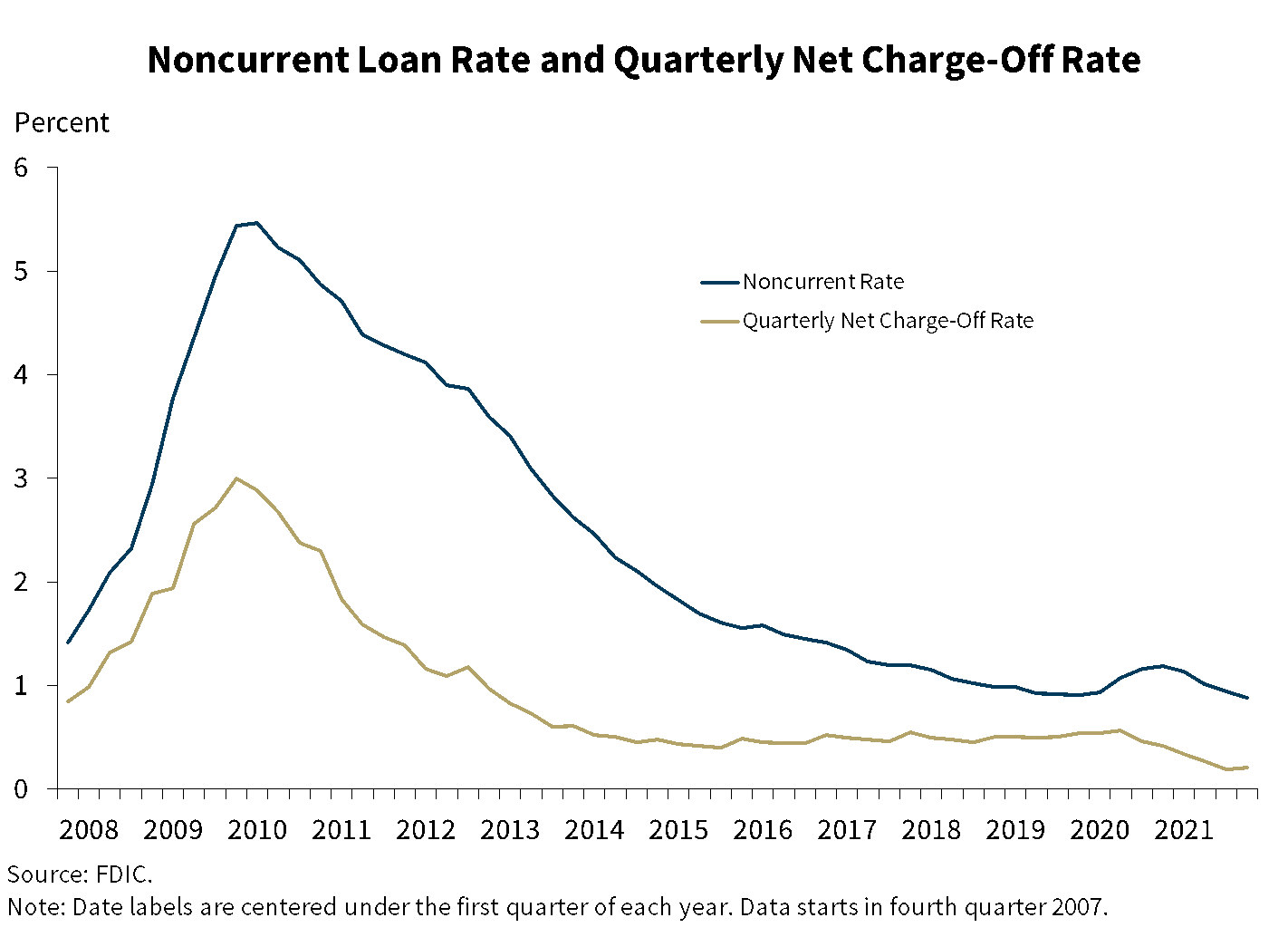 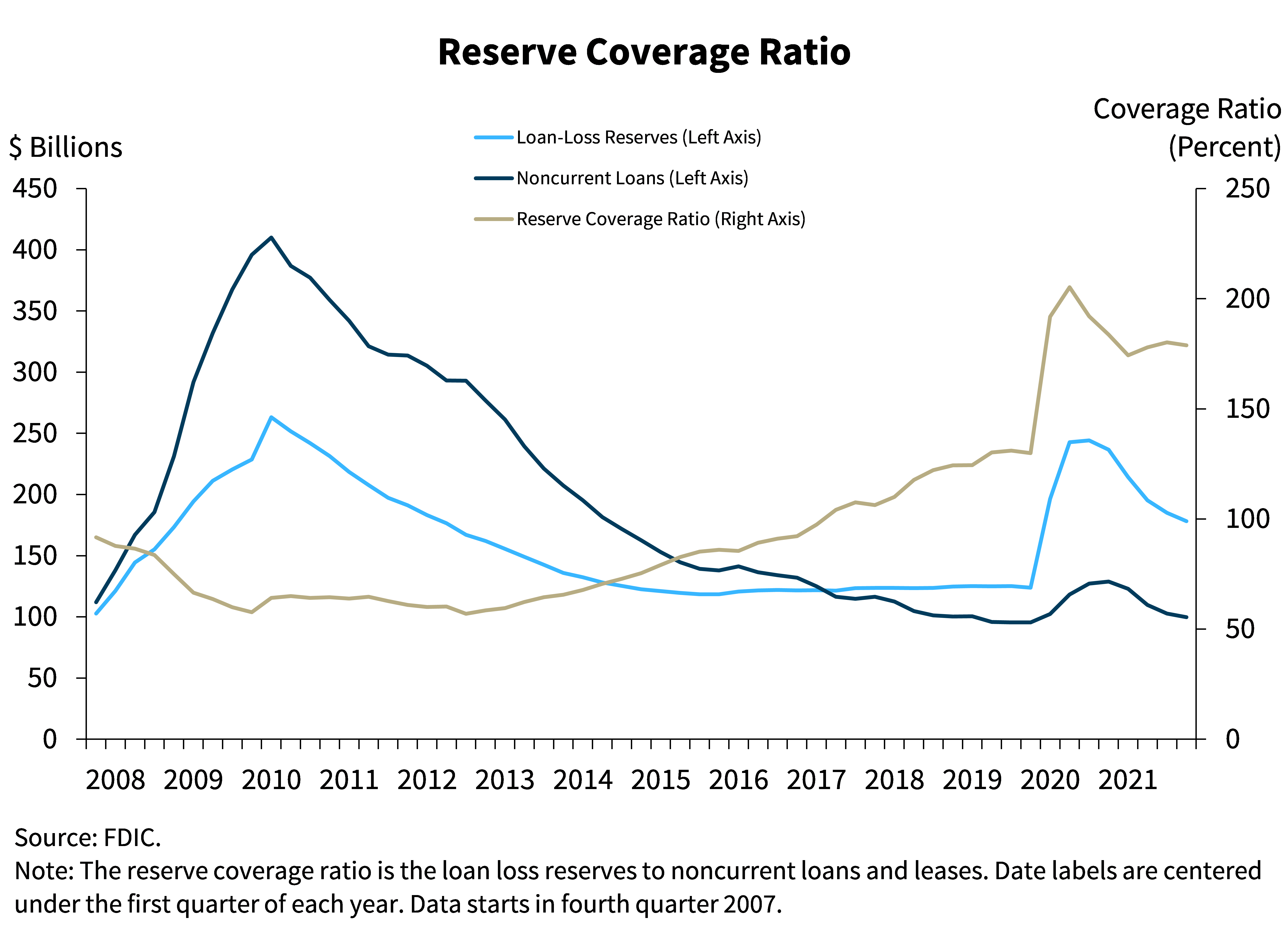 Our next chart shows that the rate of decline in loan loss reserves outpaced the decline in noncurrent loans in the fourth quarter.  The decline in the loan loss reserve reflects the four quarters of negative provisions.  As a result, the reserve coverage ratio for noncurrent loans declined slightly from the previous quarter to 178.8 percent.  Despite negative provisions, the coverage level remains well above the pre-pandemic level of 129.9 percent and the financial crisis average of 79.1 percent. 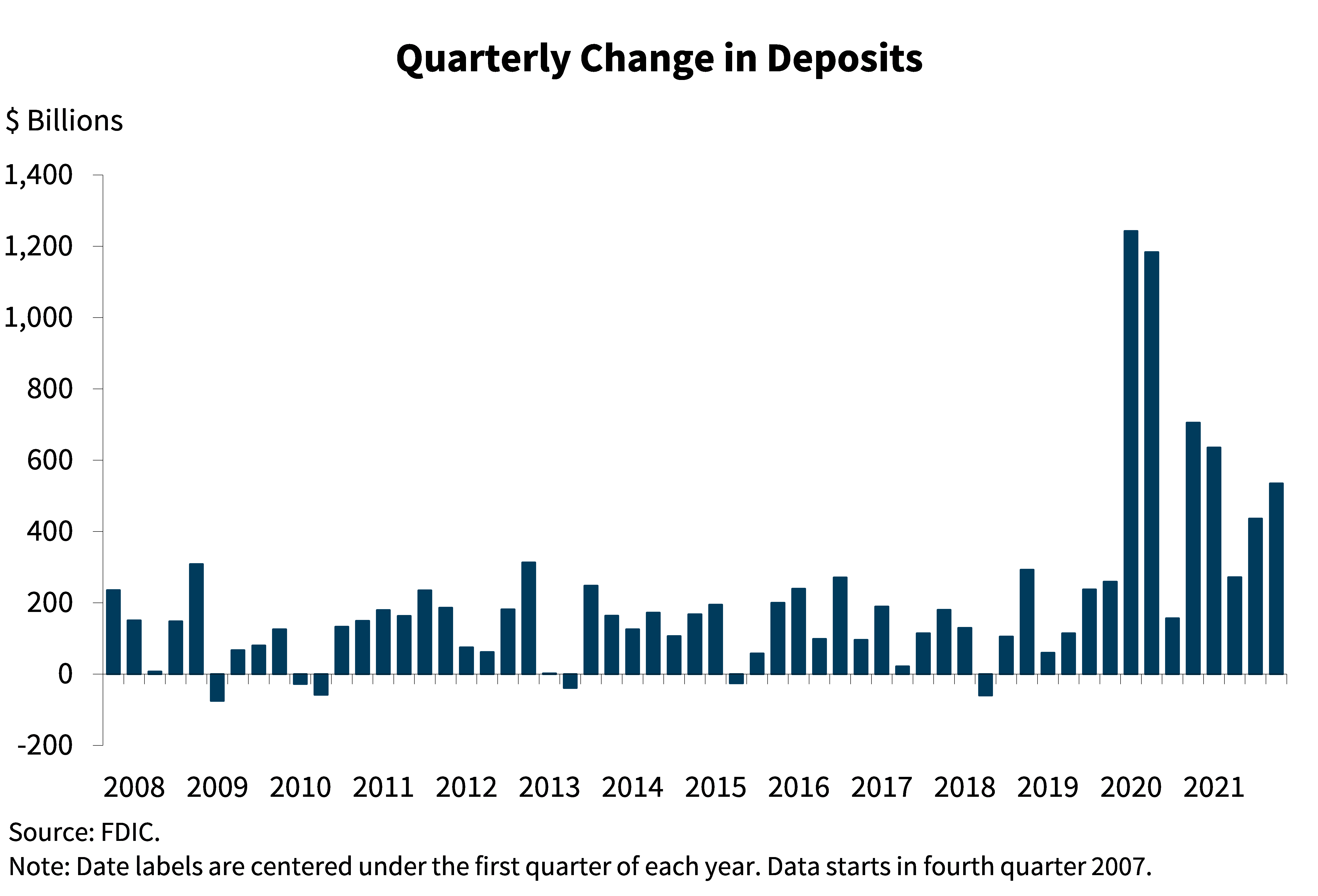 This chart shows that deposits continued to increase in fourth quarter 2021.  Total deposits were $535.0 billion or 2.8 percent higher than last quarter.  Deposit levels remain high from an historical perspective; however, growth rates are below the unprecedented levels reported in 2020 and first quarter 2021. 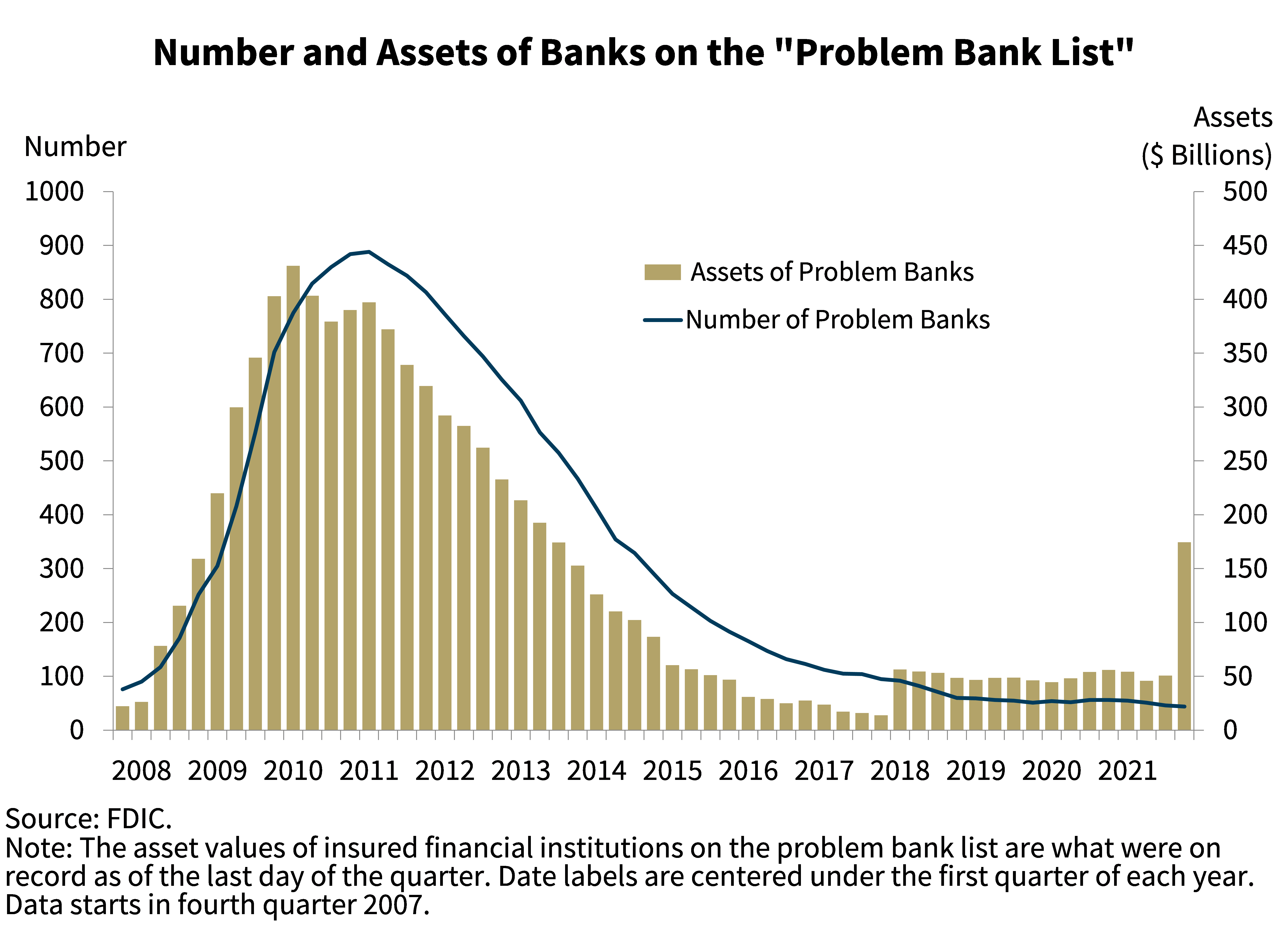 This chart shows the number of banks on the problem bank list declined by two from third quarter to 44 but problem bank assets increased from $50.6 billion to $170.2 billion.  The number of problem banks is at the lowest level since QBP data began in 1984.  No failures occurred in the fourth quarter. 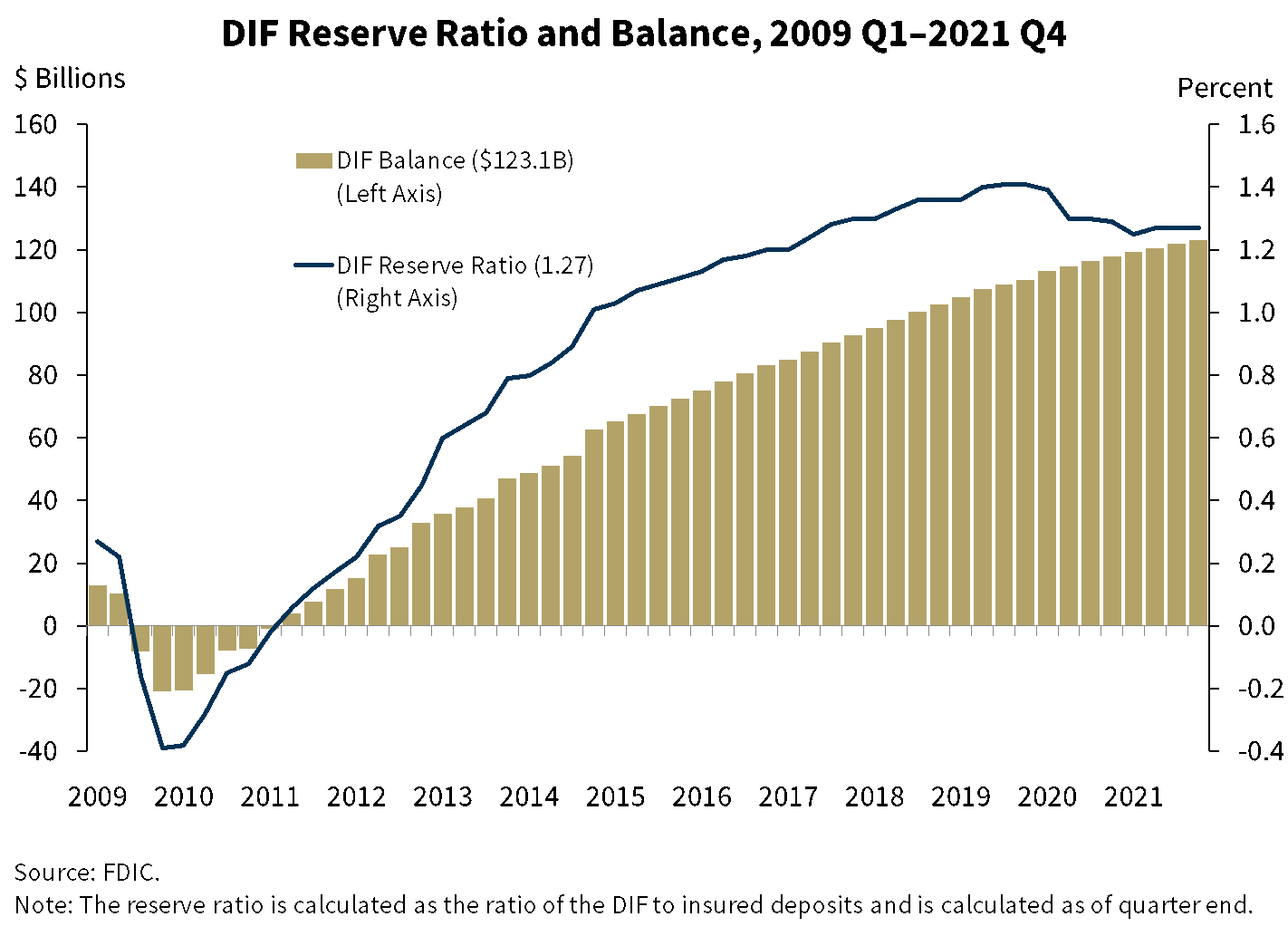 This chart shows the DIF balance was $123.1 billion on December 31, up $1.2 billion from the end of the third quarter.  Assessment revenue was the primary driver of the increase in the fund.  Insured deposits increased by 1.6 percent during the fourth quarter to $9.7 trillion.  Due to continued strong growth in insured deposits, the reserve ratio—the fund balance relative to insured deposits—remained the same at 1.27 percent as of December 31.

The FDIC adopted a Restoration Plan on September 15, 2020 that would return the Reserve Ratio to 1.35 percent, the statutory minimum, by September 2028, as required by law.  A key assumption surrounding the Restoration Plan was that insured deposits would normalize following the surge of insured deposits associated with the pandemic.  However, despite zero bank failures in over a year, the Reserve Ratio has declined from 1.29 percent in the fourth quarter of 2020 to 1.27 percent in the most recent quarter.  Insured deposits have remained persistently high with little sign of the pandemic-related surge deposits receding.  In fact, the reserve ratio failed to increase this quarter as a result of the industry realizing continued strong insured deposit growth.  The FDIC is closely monitoring the factors that affect the reserve ratio and will provide its next progress report to the Board in June.  If necessary, the Board will consider whether changes to the Restoration Plan are needed, including adjustments to assessment rates, to meet the statutory requirement by September 2028.

Overall, the banking industry remains strong.  Revenue has increased along with stronger economic growth, higher loan demand, and improved credit conditions.  At the current time, the banking industry remains well positioned to support the country’s credit needs as the economy continues to recover from the pandemic, with record deposits, favorable credit quality, and strong capital levels.

As indicated at the outset, the banking industry may face challenges as businesses and consumers continue to transition out of the pandemic, interest rates rise, and geopolitical tensions persist.  These will be matters of ongoing supervisory attention by the FDIC over the coming year.