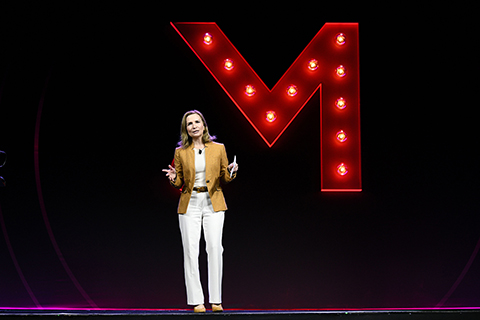 Today, I will discuss my regulatory approach, and why it is critical for regulators to be open to innovation.

Before I do so, I will share a personal story that has shaped my world view, including my regulatory approach. Thirty years ago, I immigrated to the United States by myself with $500 in my pocket, a small sum that my parents had borrowed. Within six months of my arrival in the United States, the country I was born in – Yugoslavia – and the airline that brought me here – PanAm – ceased to exist.

Now, if you come to the United States as an 18-year old with $500, it is hard to survive. I sold cars and Cutco knives, I cleaned houses, and I worked the closing shift at Blockbuster.

Along the way, I tried desperately to help my family in Yugoslavia as the country grappled with a civil war, international sanctions and the second-longest period of hyperinflation in world history. Hyperinflation in the former Yugoslavia peaked in January of 1994 at a monthly rate of 313 million percent, or more than 2 percent per hour.1 I took on extra cleaning jobs in order to send $20 to my parents in Yugoslavia from time to time.

Sending money 30 years ago was complicated. I would take one of my photographs (and for those of you too young to remember – photographs used to be printed), tape $20 to the back of it, tape the photo inside a birthday card, put that card in an envelope and mail it. One in four mailings would reach my parents; the other three times, the postal workers would take it. Sometimes, my parents received the card and the picture – with tape removed and $20 missing.

I would like to think that my story is unique, but it is shared by millions of immigrants who send money home on a daily basis.

The power of innovation

Today, moving money is a few clicks away on a smart phone. And remittances are not the only place where innovation has transformed people’s lives and expanded access to credit. Not too long ago, you had to dress up and take stacks of paper to the bank to apply for a mortgage. Today, you can get quotes from multiple lenders while wearing pajamas in the comfort of your own home.

Innovation has not only made financial markets more efficient, it has democratized finance. Financial innovation has increased access to products and services, lowered their cost, and expanded the pool of creditworthy consumers.

If you were a kid growing up on the wrong side of the Iron Curtain in the 1970s, you quickly realized that "Bazooka" was a superior chewing gum, Levis 501’s were the best jeans ever, and that anyone who could afford Converse Chuck Taylor’s was wearing a pair. American inventions transformed the world with the first mass-produced automobile,2 the first commercial flight,3 the first personal computer,4 the first cellphone,5 and many more.

Now that I have had the privilege of being in the United States for 30 years and am in charge of a venerable federal regulatory agency, I ask myself daily: what is the proper role of government in enabling innovation? What are the consequences of getting it wrong? How do we ensure that the United States remains the place where ideas become concepts and those concepts become the products and services that improve people’s lives?

This is especially important as regulators grapple with how to approach blockchain technology and digital assets. "Two [regulatory] roads [seem] to diverge in a yellow wood:"6

This is not the first time that regulators are trying to fit new technologies into the existing legal framework. I was in law school in the late 1990s, taking classes on how the existing intellectual property legal regime would address the internet. It was not easy then, as it is not easy now, to figure out how to create a regulatory framework for something that is out of the ordinary. Slowly but surely, U.S. policymakers developed a series of laws, regulations, and legal principles that allowed the internet to survive, grow, and change everything. They did not cut the Gordian Knot, but slowly unraveled it. Had they not done so, your cell phones would still be just phones and your document exchange would involve a fax machine.

More recently, the United States has been a leader in the development of machine learning, artificial intelligence, and other cutting edge technologies. But other countries, often not saddled with legacy systems such as ours, are moving forward at a breathtaking pace. In China, for example, the value of mobile payment transactions is greater than the worldwide value of Visa and Mastercard transactions combined.7 In Kenya, 70 percent of adults have used mobile money, even if only 55 percent have a traditional bank account.8 The United States can simply no longer take for granted that we will be at the forefront of technological advancement. We should not take for granted American exceptionalism, it has to be earned every single day.

Which brings me to crypto assets. As a regulator, my job is not to make predictions about the future of crypto assets. My job is to provide clear rules of the road – to allow innovation to flourish, while mitigating risks. If we fail to do this, we risk stifling innovation and forfeiting America’s leadership in developing world-changing technologies.

Over the past several months, the FDIC has been engaged with the Federal Reserve and the Office of the Comptroller of the Currency in what some have called a "crypto sprint." Through this process, the agencies are coordinating policies for how and under what circumstances banks can engage in activities involving crypto assets.

My objective is to provide clear guidance to the public on how our existing rules and policies apply to crypto assets, what types of activities are permissible for banks to engage in, and what supervisory expectations we have for banks that do engage in such activities. We plan to issue a series of policy statements in the coming months.

Over the past couple of years, we have seen a dramatic increase in the use of stablecoins, primarily to facilitate converting crypto-assets into fiat currency. But stablecoins have several other potential uses. Several firms, including existing stablecoin issuers, are actively exploring the potential for stablecoins to serve as a mechanism for retail payments. We have also seen banks establish limited payment networks for commercial customers to transfer funds using tokens in near-real time.

Stablecoins can offer many potential benefits . . . a faster, cheaper, more efficient mechanism for making payments than legacy systems . . . "programmable" payments that happens automatically based on the occurrence of a specified event, which could lead to better management of debt repayment.

Alongside these benefits, stablecoins also present certain risks, specifically if one or more were to become a dominant form of payment in the United States or globally. This could lead to substantial sums of money migrating out of insured banks with significant ramifications for credit creation, financial stability, and bank funding.

In order to realize the potential benefits stablecoins have to offer, while accounting for potential risks, stablecoins should be subject to well-tailored government oversight. That oversight should rest on the foundation that stablecoins issued from outside the banking sector are truly backed 1:1 by safe, highly liquid assets.

If issuers purport to have reserves available on demand to satisfy withdrawal requests, regulators should have authority to ensure the funds are there, specifically if such issuers are large enough that a stablecoin "run" could result in financial instability. There are other potential risks we must be cognizant of, such as ensuring operational resilience and preventing money laundering. Establishing clear regulatory expectations will be paramount to give this market an opportunity to grow and mature in a responsible manner.

Over three years ago, I assumed the chairmanship of the FDIC with a firm belief that the role of government in our society is to promote, not inhibit, growth and innovation. Every day I try to exercise humility by telling myself that regulators should not assume we know where the market is going, or that we can fully appreciate the potential that lies beneath.

We must be cognizant that our American values, culture, and influence face increasing competition from abroad, including from regulatory systems that focus intently on promoting technological innovation and taking the mantle from the United States.

Regulators should be agile and open to risk mitigation for new technologies . . . and not throw out the baby with the bathwater. That proverbial baby, with proper care, may just grow up to be a responsible, productive, and, perhaps, brilliant adult.

6 Robert Frost, The Road Not Taken.