Good morning, and welcome to our release of full-year and fourth quarter 2020 performance results for FDIC-insured institutions.

The low interest rate environment coupled with economic uncertainties will continue to challenge the banking industry, placing downward pressure on revenue and the net interest margin. However, the banking industry maintains strong capital and liquidity levels, which can mitigate potential future losses.

The Deposit Insurance Fund (DIF) balance was $117.9 billion on December 31, up $1.5 billion from the end of the third quarter. However, the reserve ratio declined one basis point to 1.29 percent, solely because of strong estimated insured deposit growth. In accordance with the Restoration Plan, FDIC staff continues to closely monitor the factors that affect the reserve ratio and will provide progress reports and, as necessary, modifications to the plan to the Board at least semiannually. 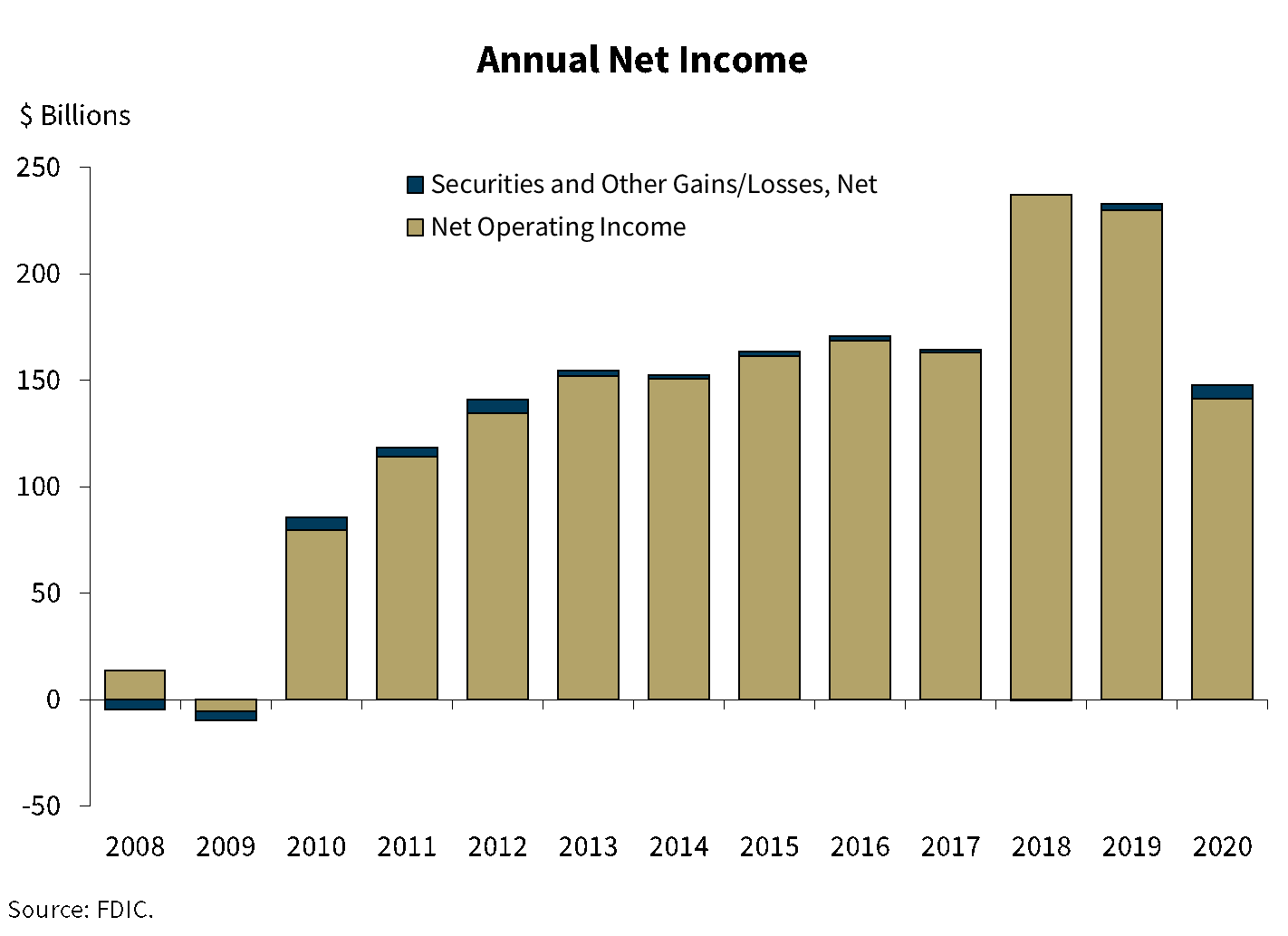 Our first chart shows that full-year 2020 net income fell to $147.9 billion, down 36.5 percent from 2019. The decline was primarily attributable to higher provision expenses in the first half of 2020, related to the decline in economic conditions. The average return-on-assets ratio (ROA) declined from 1.29 percent in 2019 to 0.72 percent in 2020.

Community banks reported annual net income of $25.9 billion in 2020, up 3.6 percent from 2019. The improvement was attributable to higher noninterest income, which increased by $6.1 billion, and net interest income which rose by $3.6 billion. 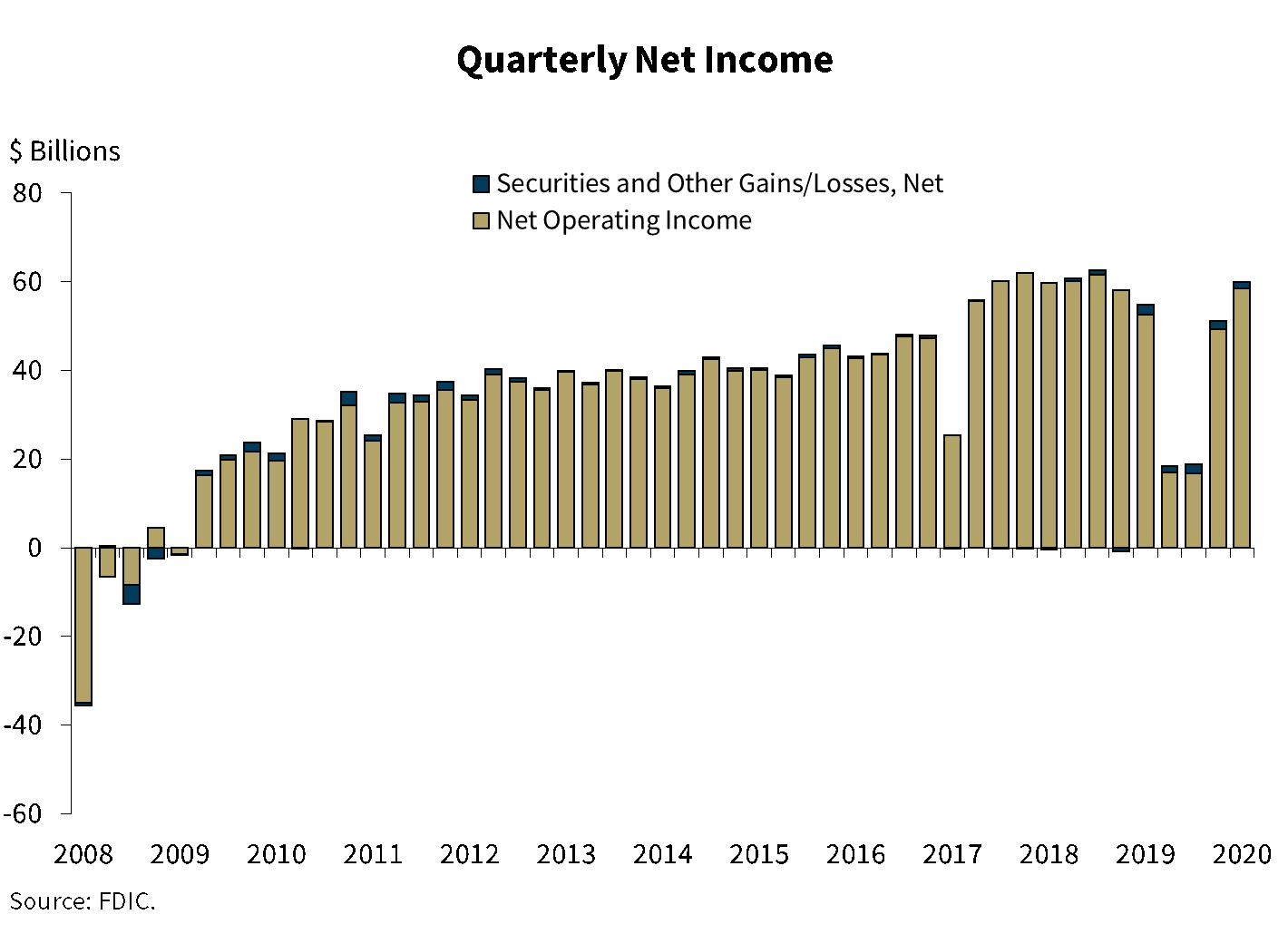 Chart 2 shows that the banking industry reported quarterly net income of $59.9 billion during the fourth quarter, a 9.1 percent increase from a year ago. This marks an improvement from the first three quarters in 2020, where net income declined on an annual basis. More than half of all banks (57.4 percent) reported improvements in quarterly net income from a year ago. The industry’s ROA ratio was 1.11 percent during the fourth quarter, up from 0.97 percent in the third quarter, but below a recent high of 1.41 percent in third quarter 2018.

With the improving economic outlook, provision expenses for the banking industry declined $11.4 billion (76.5 percent) from a year ago, reaching the lowest level since second quarter 1995. The reduction in provision expenses drove the improvement in quarterly net income.

Community banks reported quarterly net income of $7.4 billion dollars in the fourth quarter, an increase of 21.2 percent from a year ago. Improvement in net income was led by higher net interest income and gains from loan sales.

Noninterest income rose $4.3 billion (6.5 percent) from a year ago—driven by higher revenue from loan sales and sales of other assets. 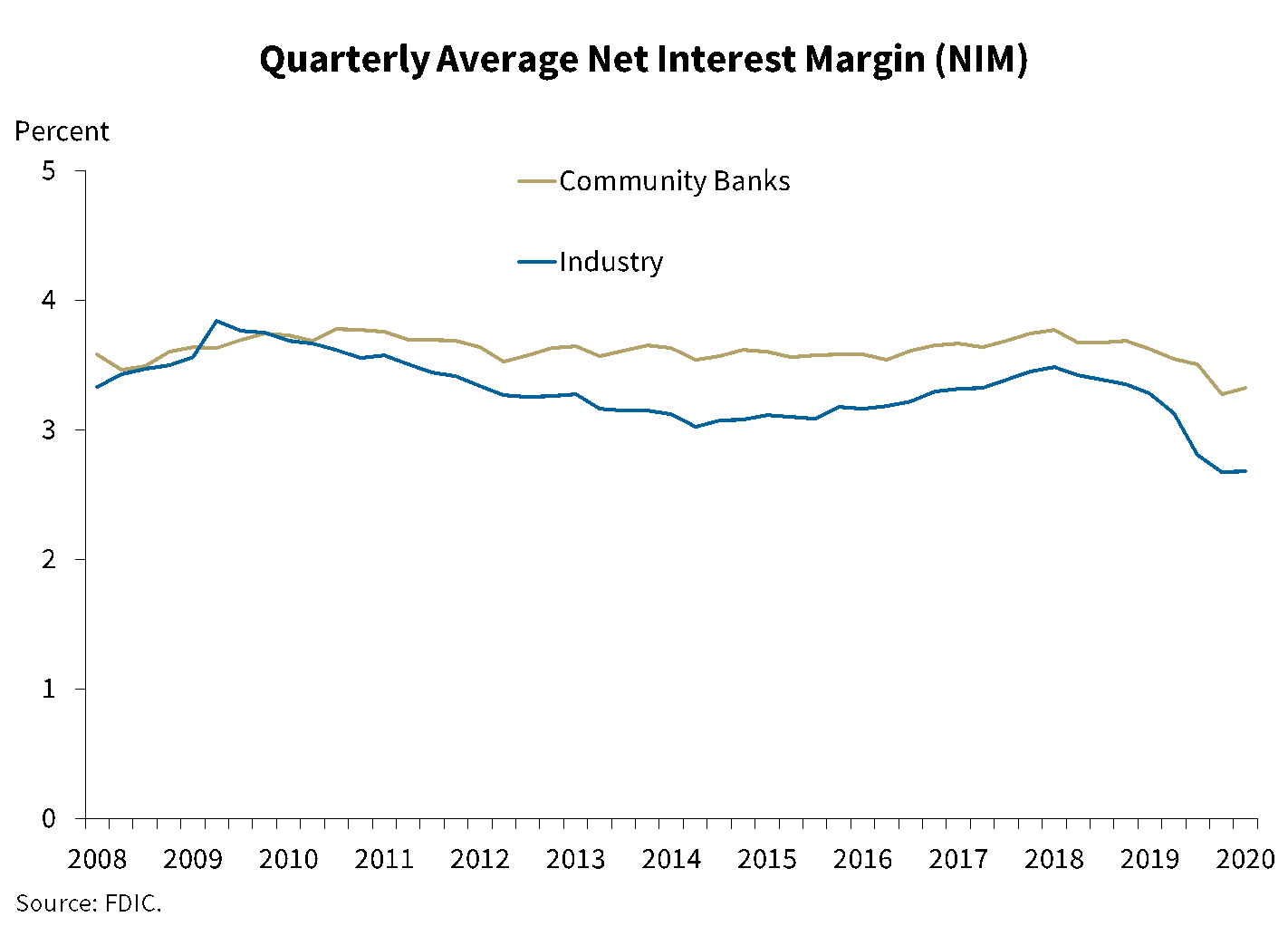 Chart 4 shows a 60 basis-point reduction in the industry’s net interest margin (NIM) from a year ago to 2.68 percent. NIM remains unchanged from the previous quarter. Banks of all QBP asset size groups reported continued average net interest margin compression compared to year ago levels, as reductions in earning asset yields outpaced the reduction in funding costs. Earning asset yield and funding cost levels are both at record lows. 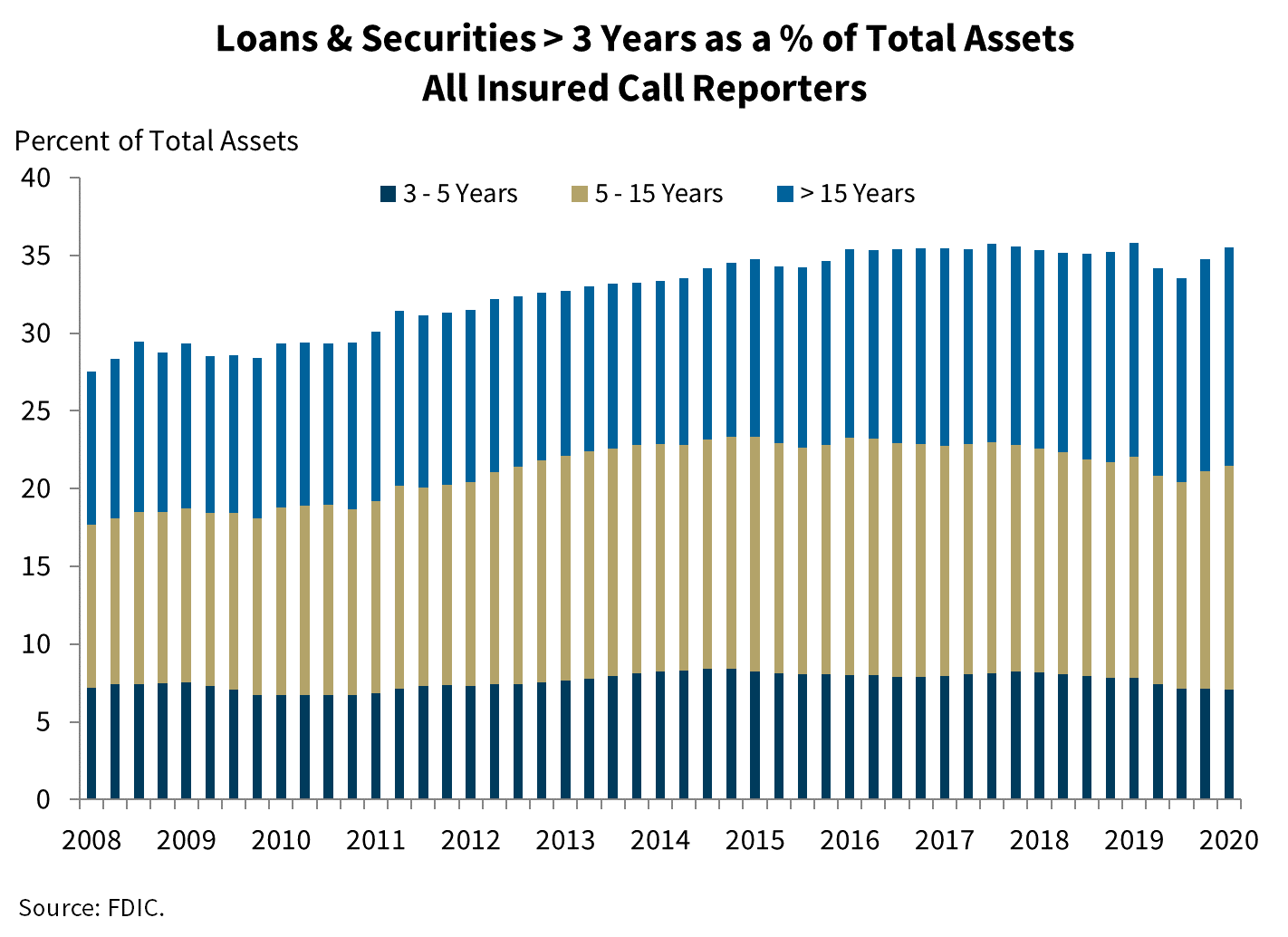 Chart 5 shows that the share of longer-term assets as a percentage of total industry assets increased during the quarter, with more than one-third of industry assets set to reprice or mature in three or more years. The industry continues to navigate the challenges presented by the low interest rate environment. Banks added longer-term assets to their balance sheets, which may help preserve or bolster net interest margins. 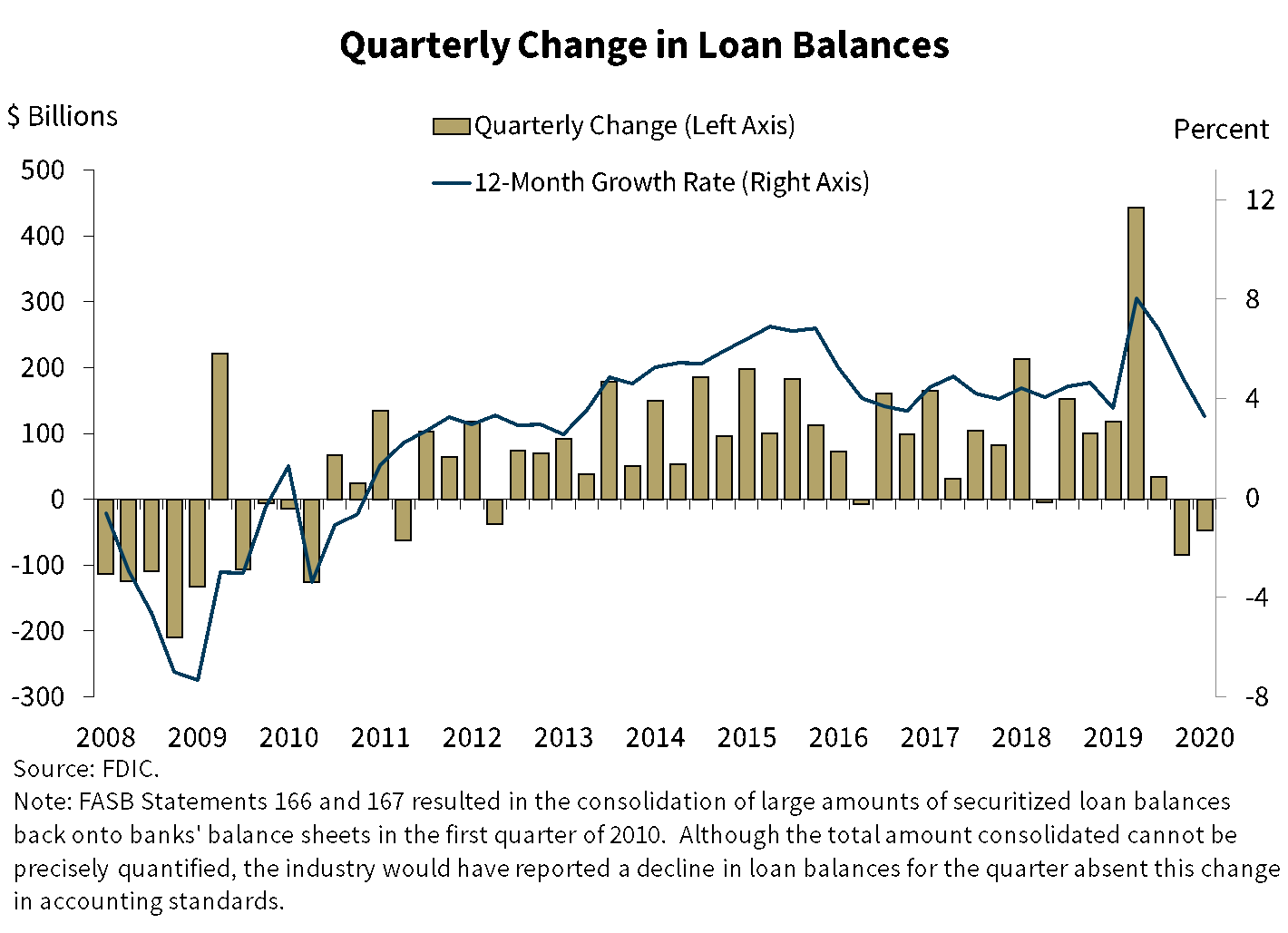 Chart 6 shows a decline of $48 billion (0.4 percent) in loan balances in fourth quarter. The decline was driven by a reduction in commercial and industrial (C&I) lending, which fell by $104 billion (4.1 percent) from the previous quarter. Small Business Administration-guaranteed Paycheck Protection Program loans declined $84 billion (17.1 percent) from the previous quarter to $407 billion. On an annual basis, loan balances increased 3.3 percent. This was lowest growth rate since fourth quarter 2013.

Community banks had similar trends as the industry with loan growth contracting quarterly but expanding annually. Loan balances declined 1.6 percent between third and fourth quarter 2020, led by a reduction in C&I lending but grew 10.3 percent annually due to community banks’ participation in the Paycheck Protection Program. 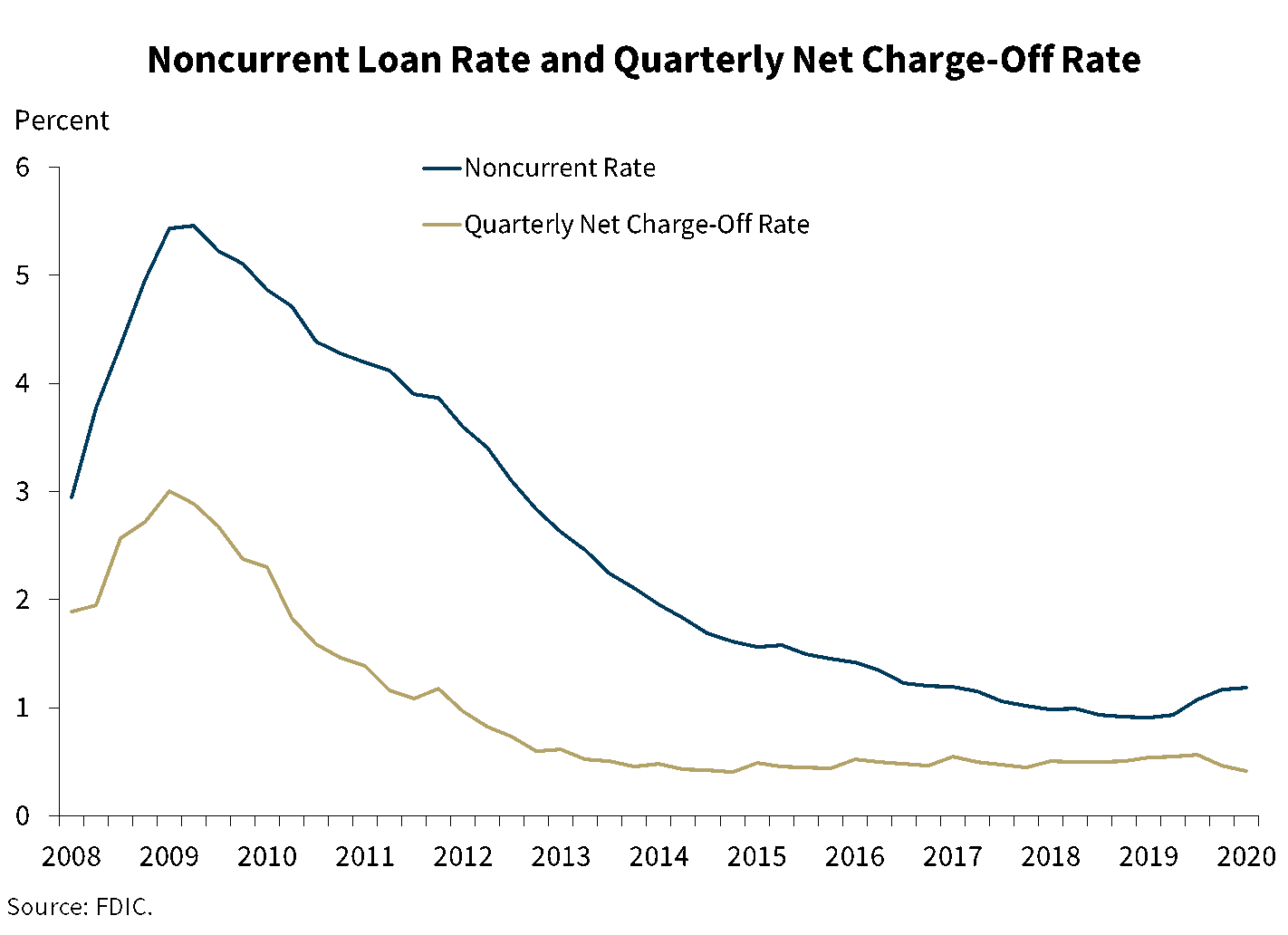 Chart 7 shows slight deterioration in the noncurrent rate in the fourth quarter, but a modest improvement in the net charge-off rate. The noncurrent loan rate increased 1 basis point from the previous quarter to 1.18 percent, driven by an increase in delinquent nonfarm nonresidential loans. The net charge-off rate declined 13 basis points to 0.41 percent from one year ago, driven by a reduction in credit card loan charge offs. 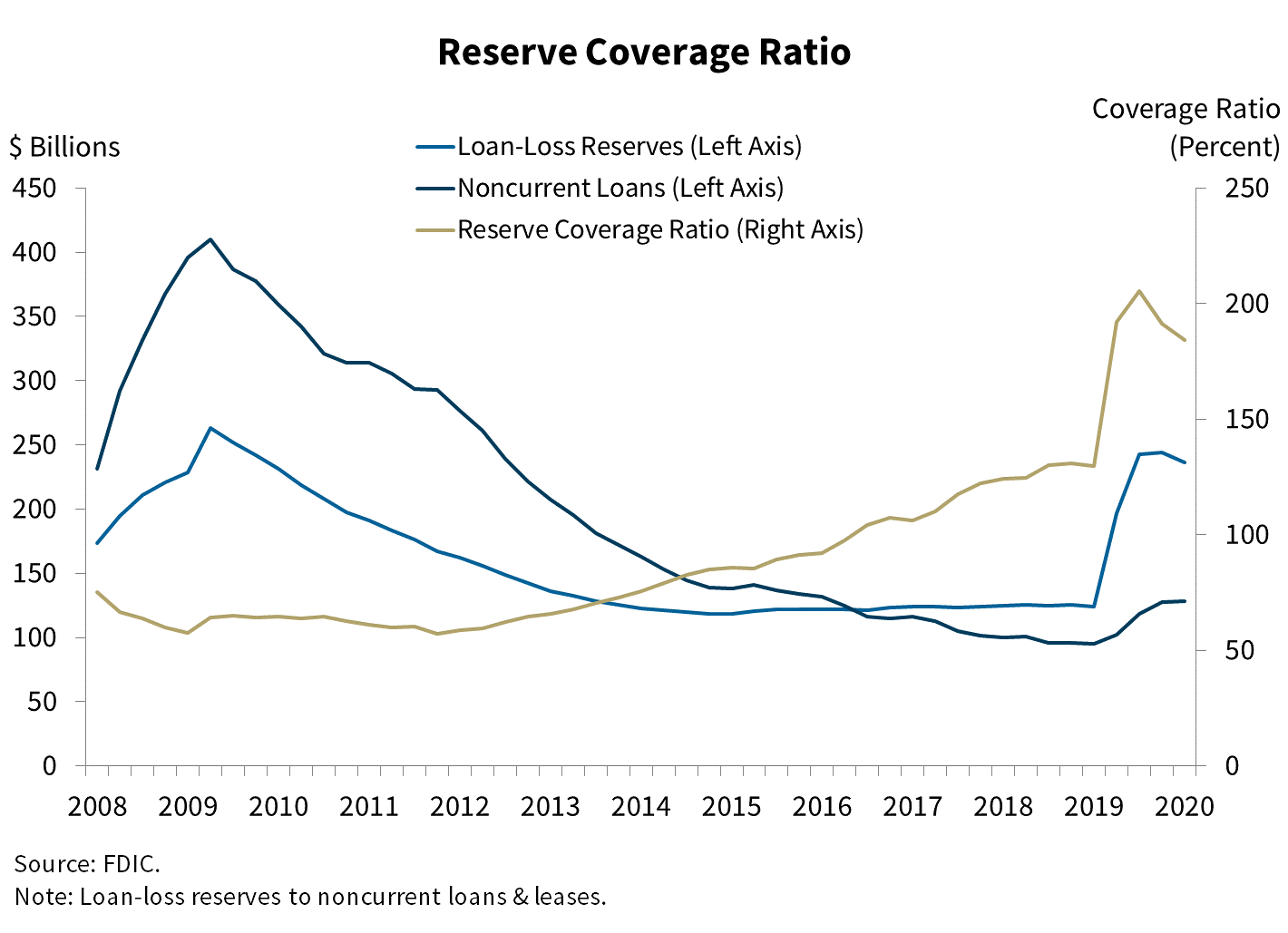 With the growth in deposits, the banking industry’s liquidity position continued to strengthen. Cash and due from balances increased $357 billion (12.6 percent) from the previous quarter. Total securities increased $321 billion (6.7 percent), a record high quarterly dollar increase. 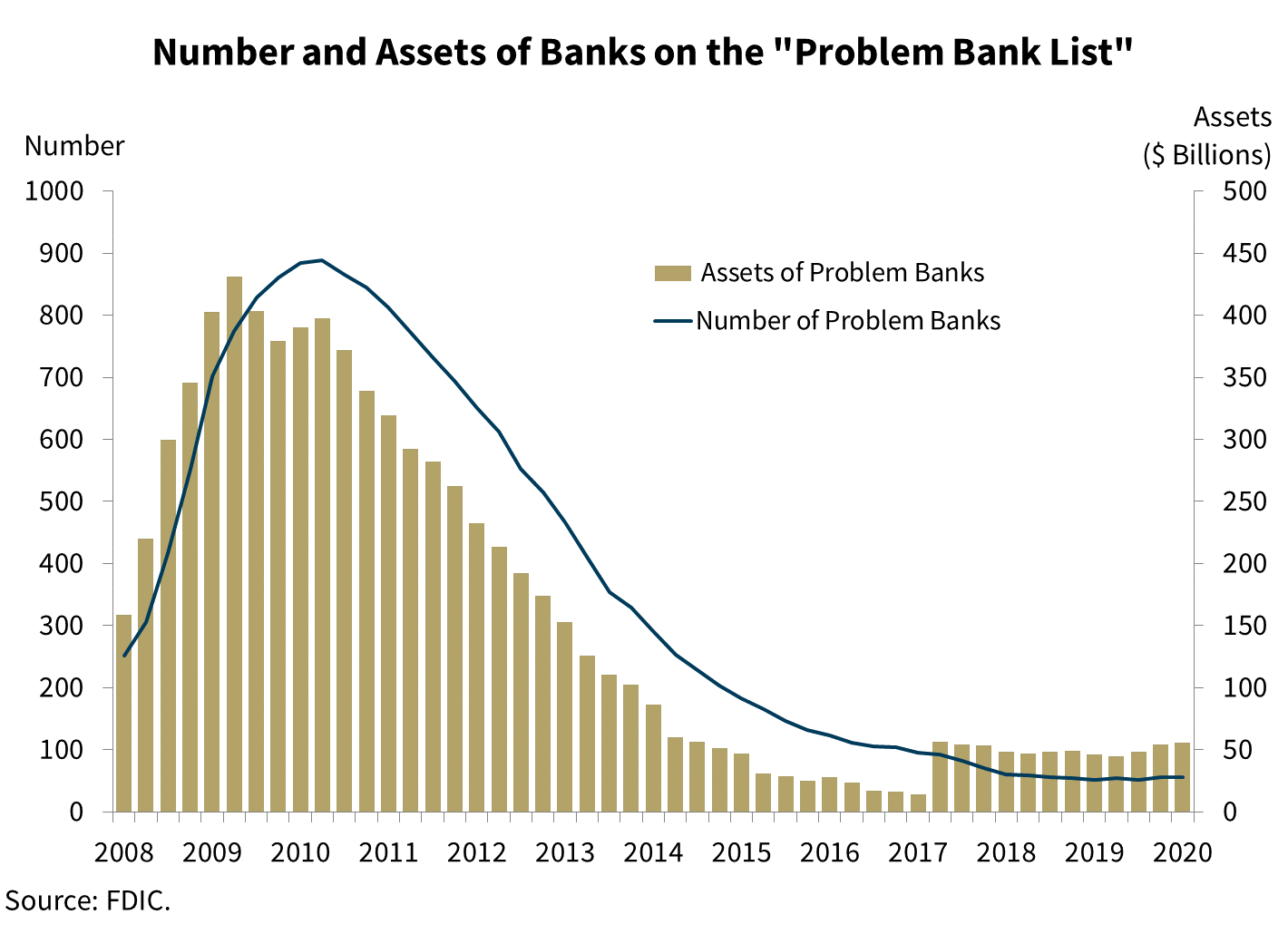 Chart 10 shows the number of banks on the FDIC’s “Problem Bank List” remained unchanged from the previous quarter at 56. The number of problem banks remains near historical lows. 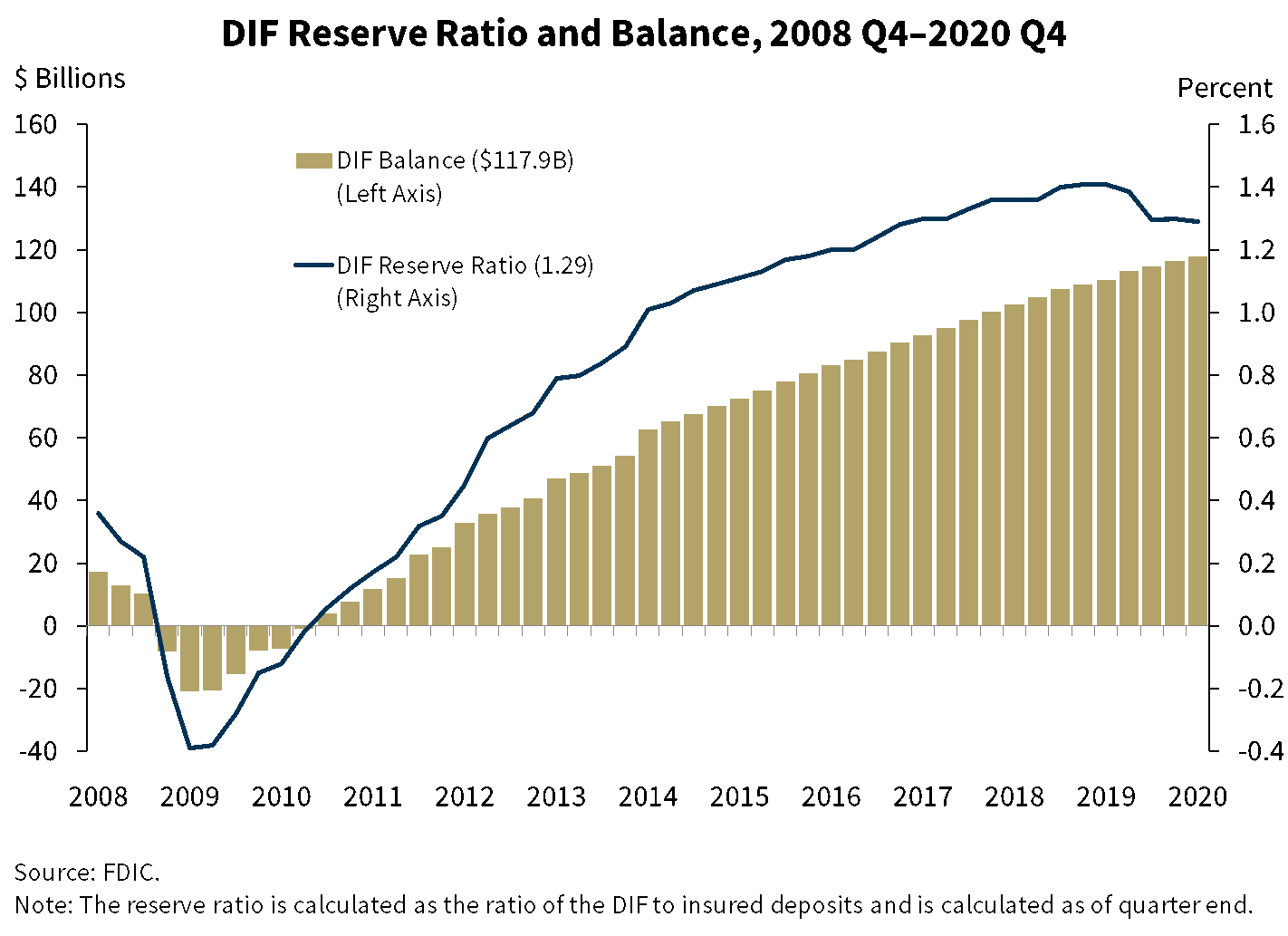 The DIF balance was $117.9 billion on December 31, up $1.5 billion from the end of the third quarter. Assessment revenue was the primary driver of the increase in the fund. Interest earned on investment securities held by the DIF also increased the fund balance. However, unrealized losses on available-for-sale securities held by the DIF offset the effect of interest income.

Estimated insured deposits grew by a robust 2.2 percent during the fourth quarter and stood at $9.1 trillion on December 31. Although this growth is below the record increases experienced during the first and second quarters of 2020, the growth rate was the highest fourth quarter growth rate since 2008, excluding quarters when the Dodd-Frank Act TAG program was in effect.

Therefore, the reserve ratio—the amount in the DIF relative to insured deposits—declined by one basis point and stood at 1.29 percent on December 31, as can be seen in Chart 11.

As mentioned earlier, because the reserve ratio fell below its statutorily required minimum of 1.35 percent as of June 30 of last year, the FDIC Board adopted a Fund Restoration Plan in September of last year. The reduction in the reserve ratio was solely a result of the strong growth in insured deposits.

Despite significant headwinds and uncertainty in the economy, the banking industry remains strong in fourth quarter 2020. Quarterly net income improved as provision expenses declined and noninterest income increased. The banking industry reported accelerated growth in deposits in the fourth quarter. Asset quality remains stable and capital levels are strong. However, the low interest rate environment coupled with weak loan growth and the potential for continued credit quality deterioration continue to challenge the industry.

We will now answer questions regarding full-year and fourth quarter performance of the banking industry.