Good morning, and welcome to our release of third quarter 2019 performance results for FDIC-insured institutions.

Overall, the banking industry reported positive results, despite non-recurring events at three large institutions. While these events resulted in a modest decline in aggregate quarterly net income, the industry reported loan growth and the number of problem banks remained low.

The record-long economic expansion continued in the United States. With two reductions in short-term rates and a flat yield curve this quarter, challenges in lending and funding continued. The competition to attract and maintain loan customers and depositors remains strong; consequently, banks need to maintain rigorous underwriting standards and prudent risk management. 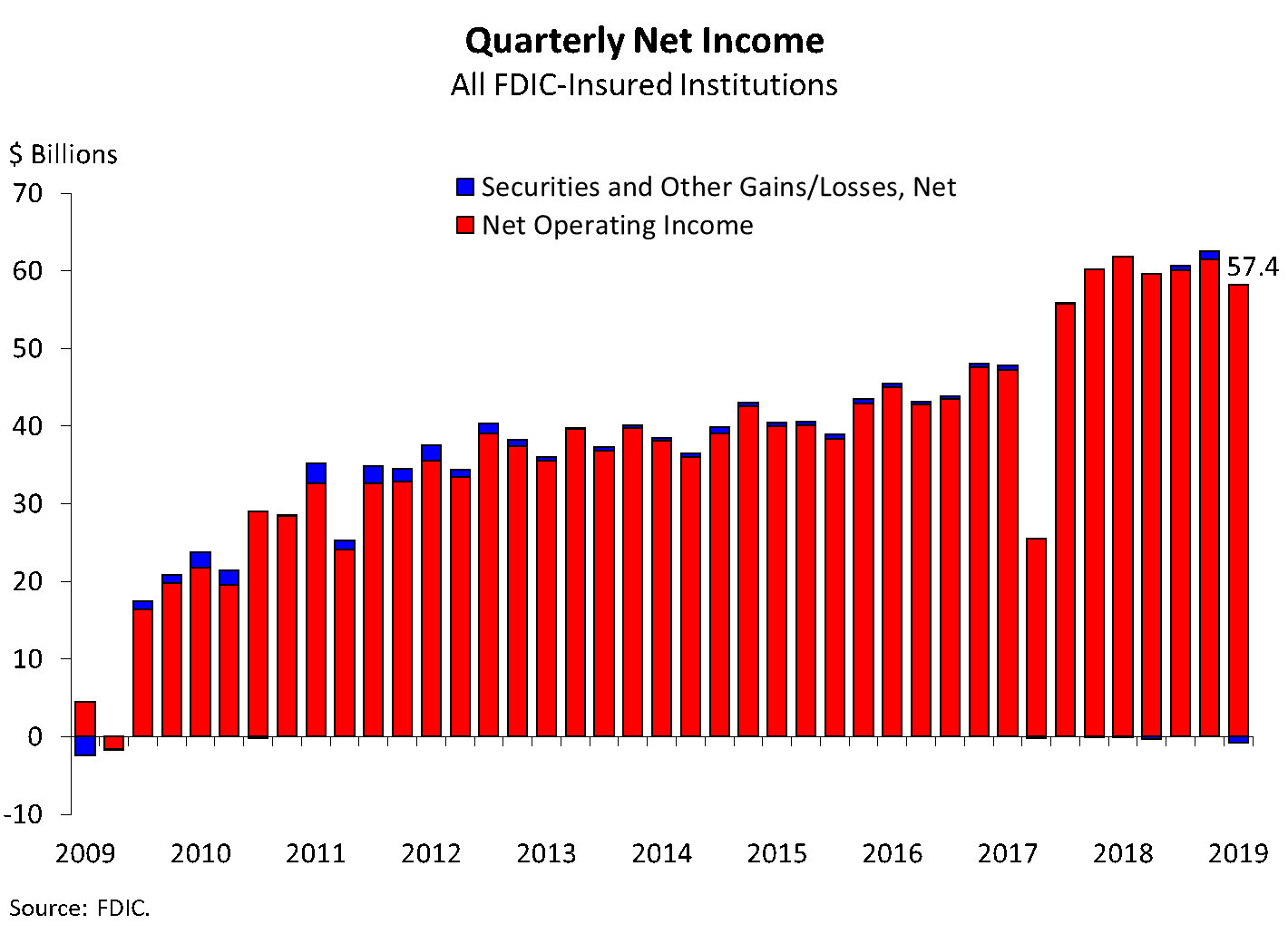 Our first chart shows that the banking industry reported quarterly net income of 57.4 billion dollars during the third quarter, a decline of 7.3 percent from a year ago. As mentioned, the decline in net income was due to nonrecurring events at a few large institutions. In line with recent years, more than 60 percent of all banks reported year-over-year increases in net income, and only 4.1 percent of institutions were unprofitable. The industry's return-on-assets ratio was 1.25 percent in the third quarter, down from 1.41 percent a year ago.

Community banks reported quarterly net income of 6.9 billion dollars in the third quarter, an increase of 7.2 percent from a year ago. 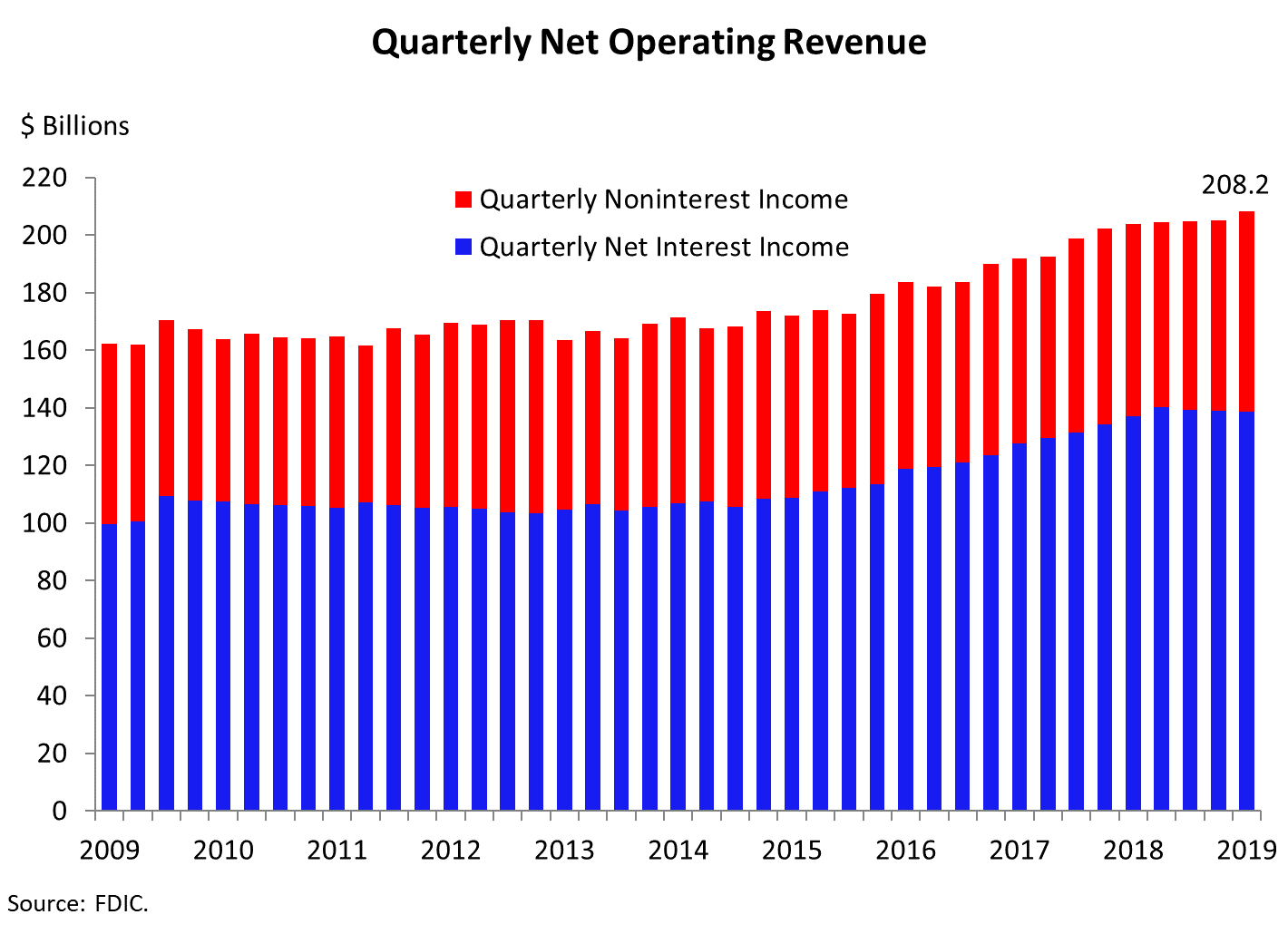 Net interest income rose by 1.2 percent from a year ago, the lowest annual growth rate since fourth quarter 2014. This slowdown was the result of lower yields on earning assets and higher costs of funds. 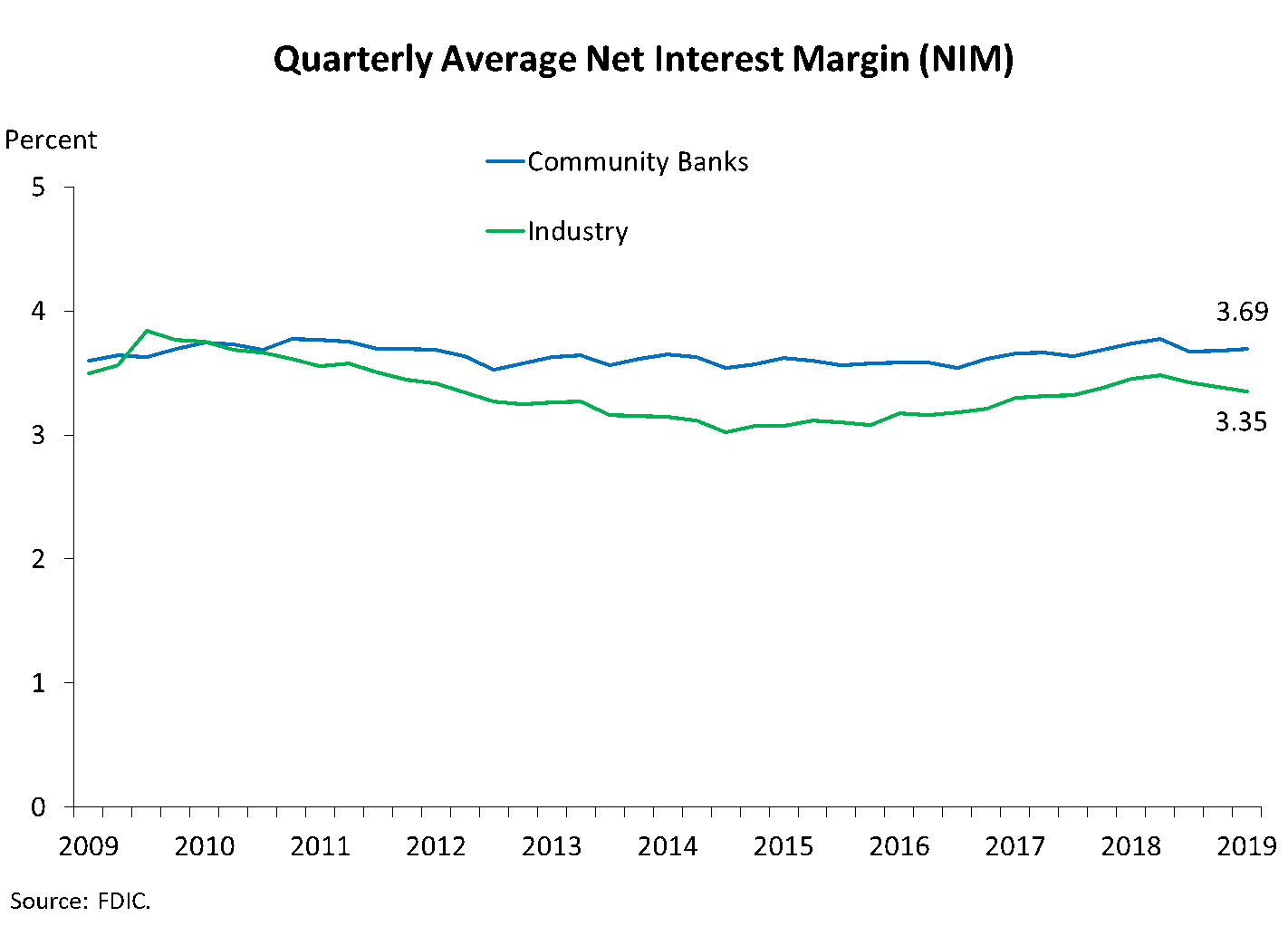 Chart 3 shows that the average net interest margin for the industry was 3.35 percent in the third quarter, down from a recent high of 3.48 percent at year-end 2018. The decline was broad-based, as net interest margins were lower for all five asset size groups featured in the Quarterly Banking Profile. The decline was caused by funding costs rising more than yields on earning assets.

Community banks continued to report a higher average net interest margin than the overall banking industry. Large institutions previously benefitted more than community banks from rising short-term interest rates, as large institutions have a greater share of assets that reprice quickly. With the recent reduction in short-term interest rates, we are seeing a reversal of this trend. 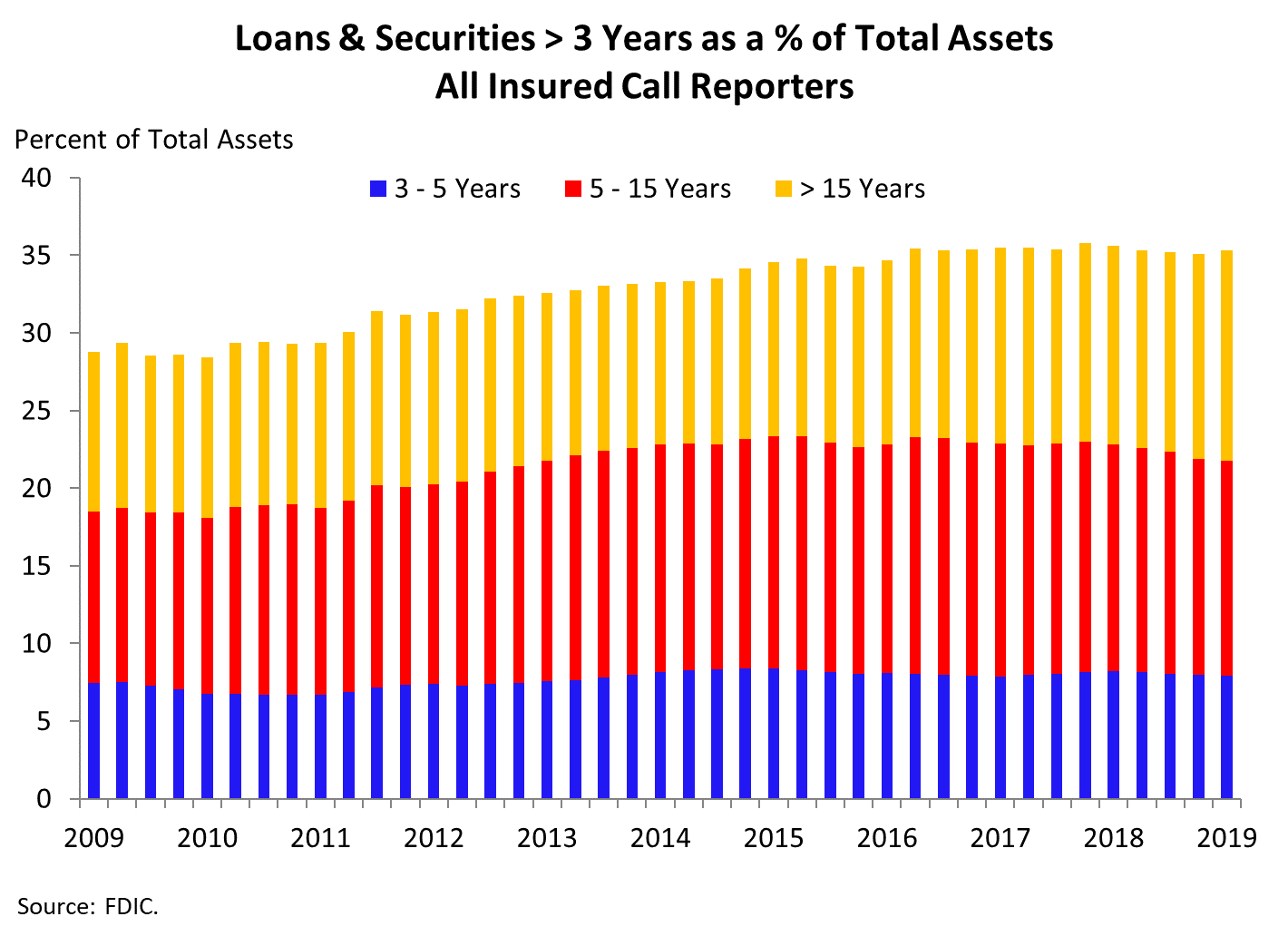 Chart 4 shows that the share of longer-term assets relative to total industry assets remained elevated, with more than one-third of industry assets maturing or repricing in three or more years.

Banks face a challenging interest-rate environment with the recent short-term rate reductions and the flat yield curve. During the post-crisis period of low interest rates, some banks responded by "reaching for yield" by investing in longer-term assets or reducing liquid assets to increase their yield on earning assets and maintain net interest margins. In the current environment, refinanced or new long-term assets are originated at lower yields. 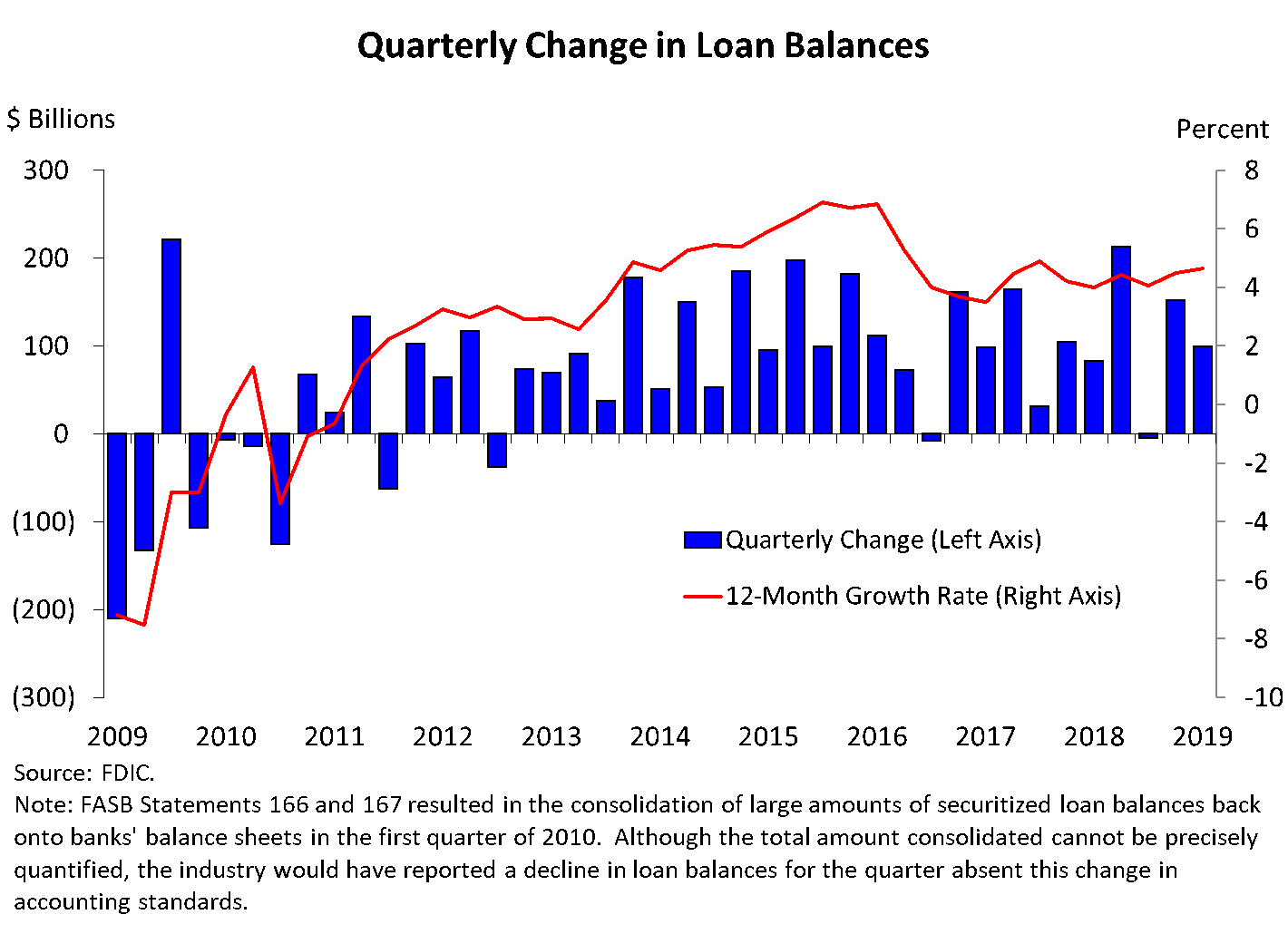 During the past 12 months, loan balances rose by 4.6 percent, slightly above the 4.5 percent annual growth rate reported last quarter. The biggest contributors to loan growth were commercial and industrial loans, consumer loans, and residential mortgages.

Loan growth at community banks was also strong, increasing by 6 percent from a year ago. The portfolios with the largest growth were commercial real estate loans, residential mortgages, and commercial and industrial loans. 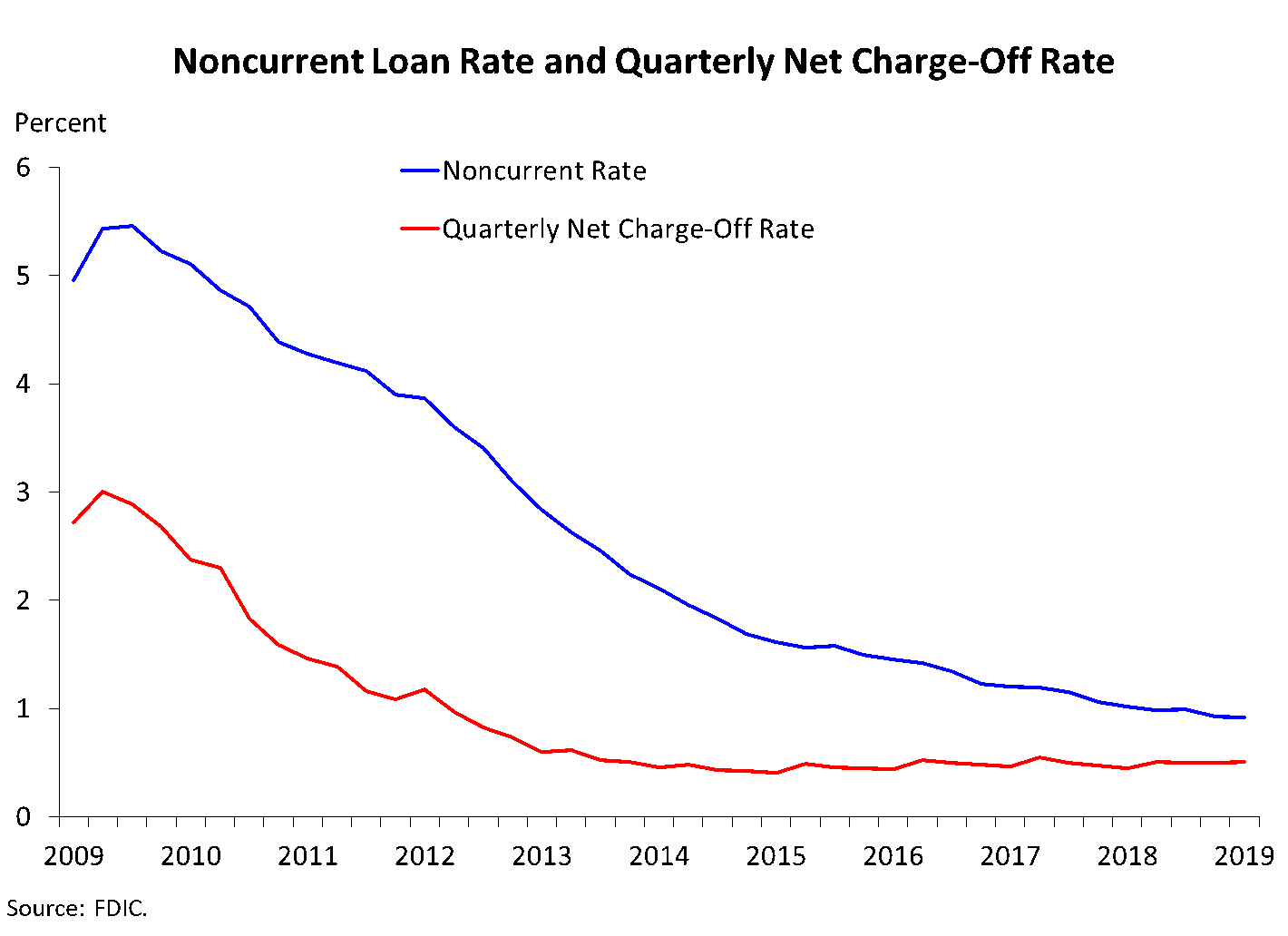 The next chart shows that asset quality indicators remained stable. The noncurrent loan rate declined from the previous quarter to 0.92 percent, while the net charge-off rate rose modestly to 0.51 percent from 0.45 percent a year ago.

Modest deterioration in the agriculture sector continued due to low commodity prices and farm incomes. While the net charge-off rate for agriculture loans remained low, some banks continued to experience asset quality deterioration in farmland and production loans. The noncurrent rate for agriculture loans at community banks rose by 11 basis points from a year ago to 1.27 percent, but is below levels reached during previous downturns. 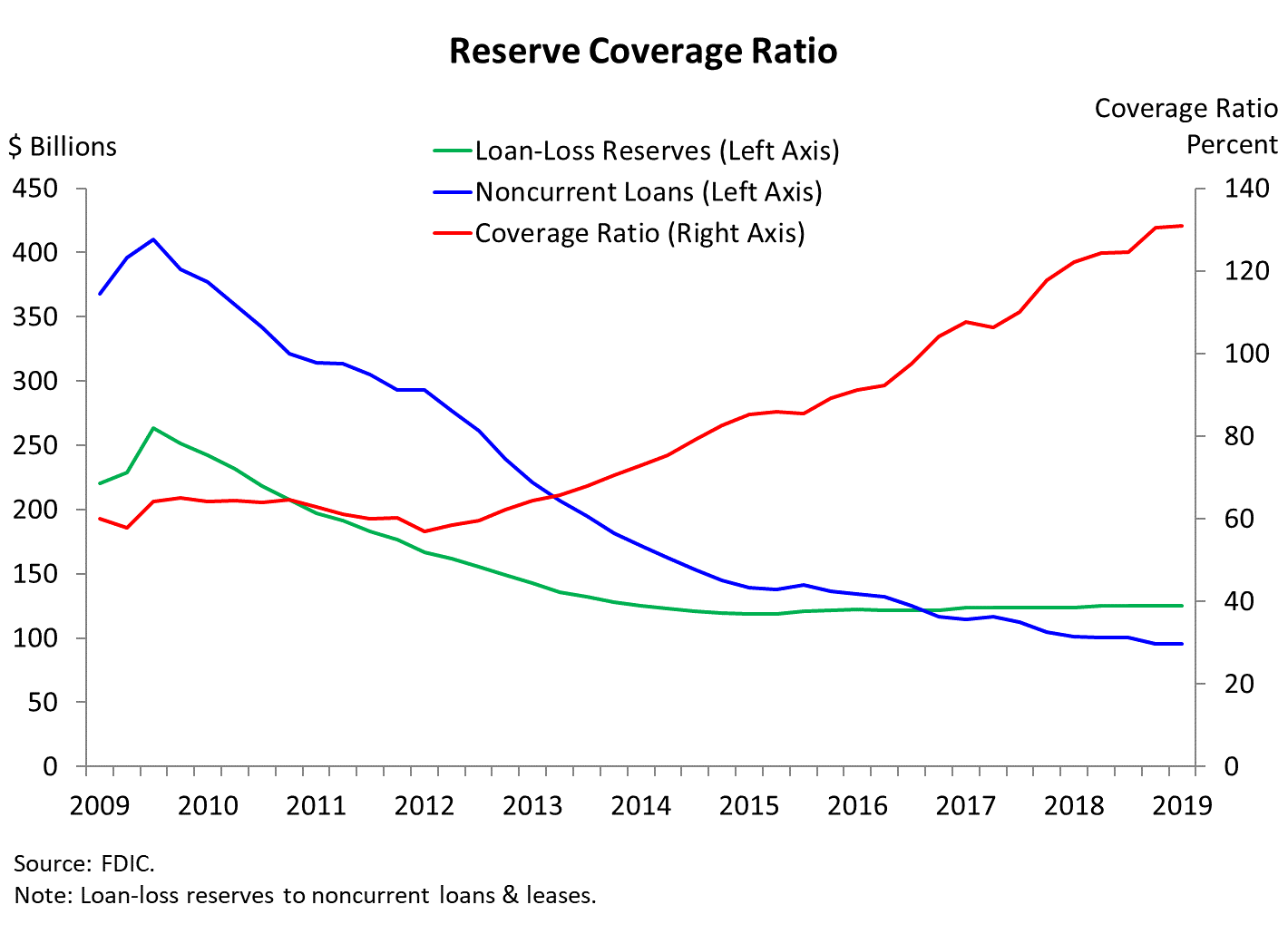 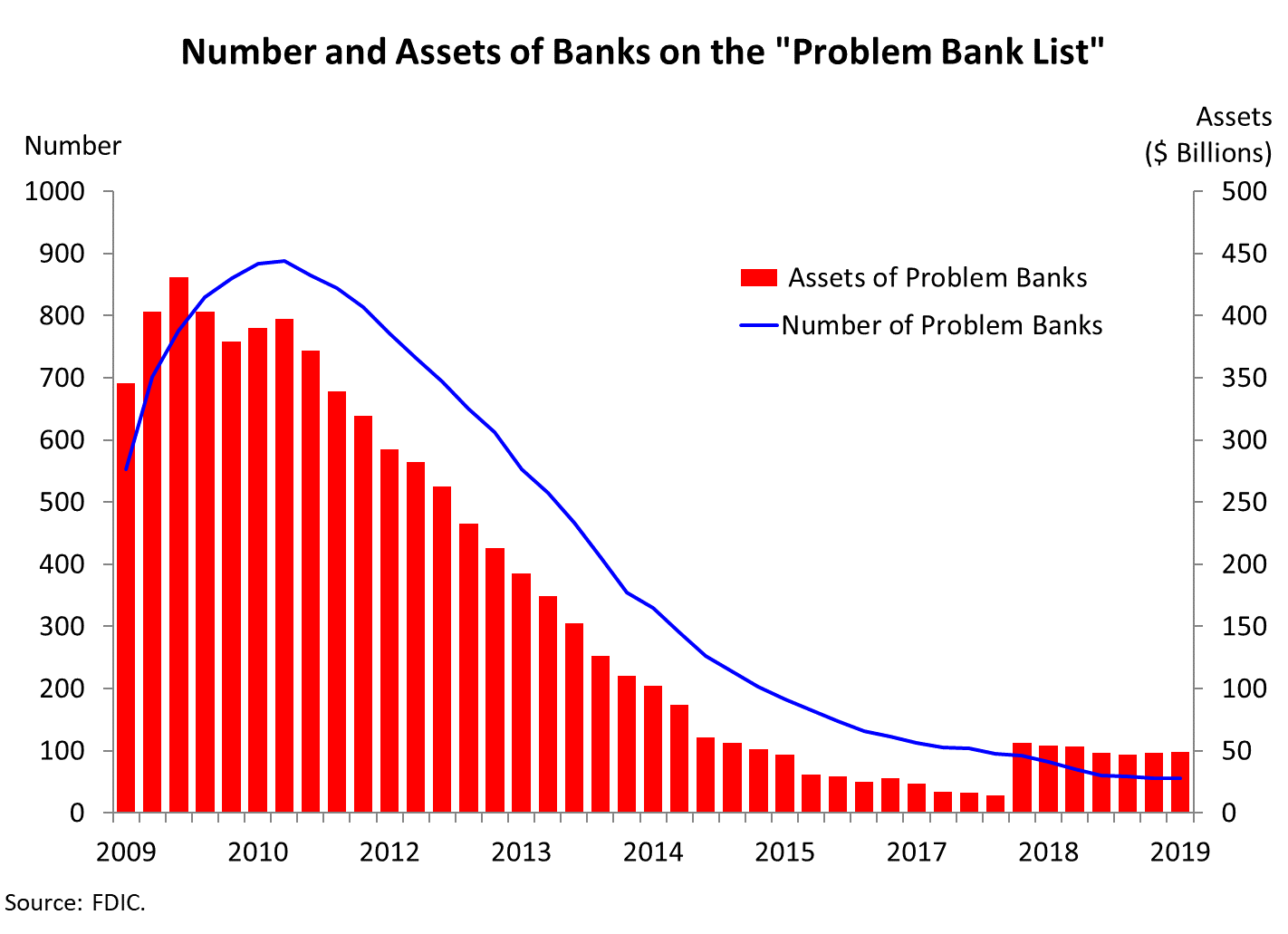 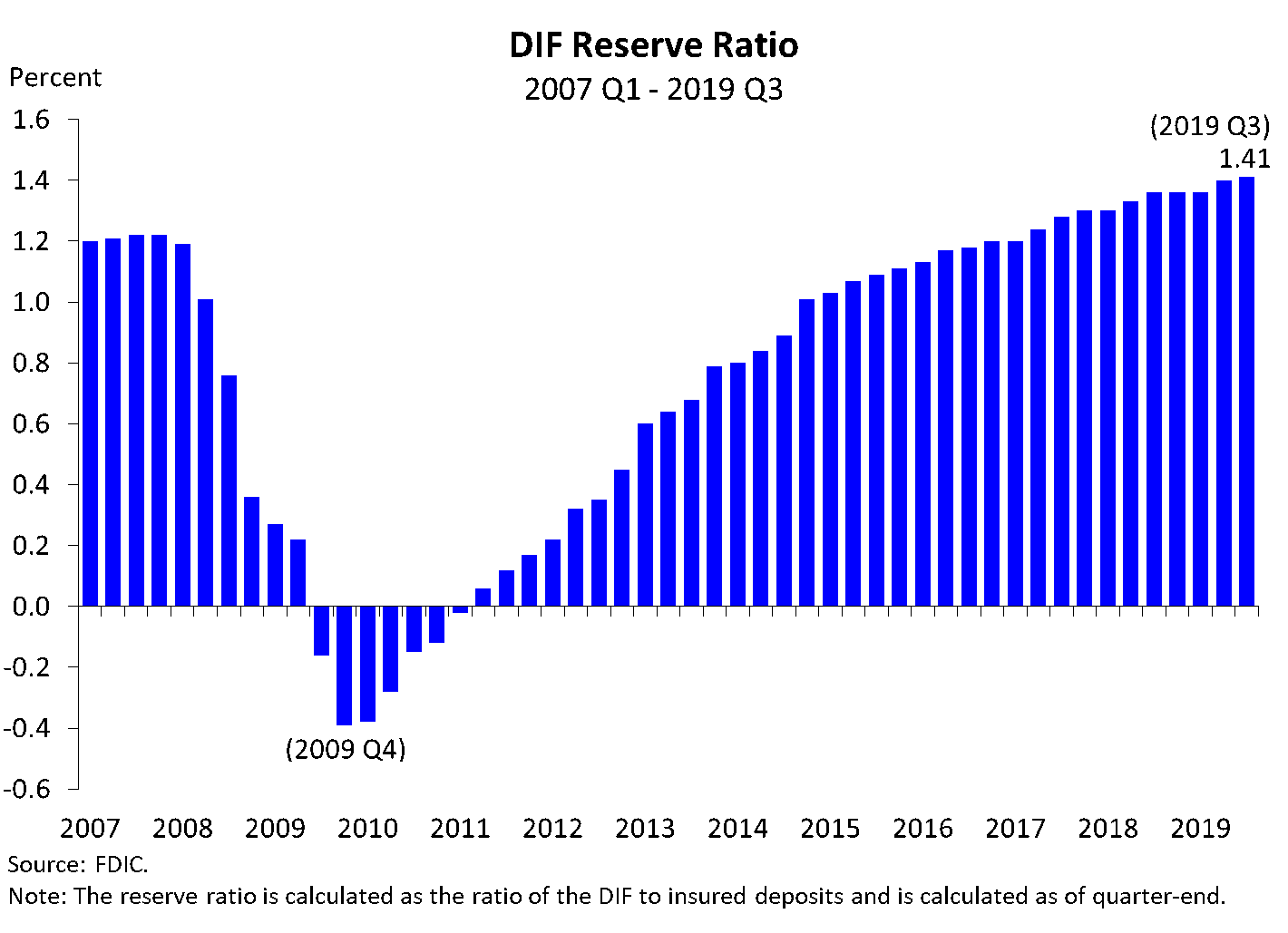 The Deposit Insurance Fund balance was 108.9 billion dollars on September 30, up 1.5 billion dollars from the end of last quarter. Assessment income was the largest contributor to the increase in the fund, followed by interest earned on investment securities held by the DIF and a reduction in losses from past failures. Estimated insured deposits were 7.7 trillion dollars at the end of September, an increase of 0.6 percent from last quarter.

Chart 9 shows that the reserve ratio—the amount in the Deposit Insurance Fund relative to insured deposits—rose to 1.41 percent at the end of September, an increase of 1 basis point from last quarter.

We will now answer any questions you may have regarding third-quarter performance of the banking industry.