Printable version: Investing in the Future of Mission-Driven Banks - PDF 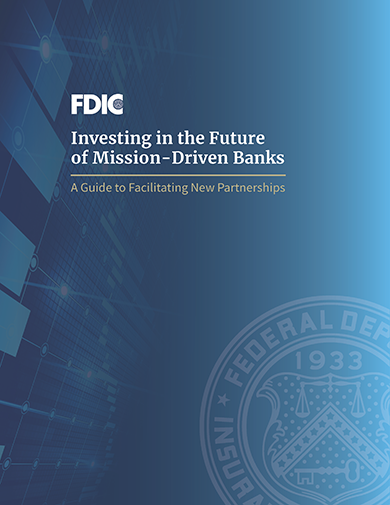 The median MDI and CDFI bank is generally small in terms of total assets. Employees in smaller institutions often wear many hats, and the institutions find it difficult to build back-office operations to scale and attain efficiencies. MDIs, particularly smaller MDIs, have significantly higher cost structures than larger institutions and non-MDI community banks. MDIs and CDFI banks that serve financially challenged populations are often the first to experience the effects of economic downturns and among the last to recover.

The FDIC recognizes that MDIs play a unique role in promoting economic viability in minority and low- and moderate-income communities. Preserving, promoting, and building capacity in these institutions are high priorities for the FDIC. Because of this, the FDIC created “Investing in the Future of Mission-Driven Banks” as a way for private companies, philanthropic organizations, and others to learn more about the vital role of these financial institutions, and to provide suggestions about supporting MDIs and CDFI banks across the country through investments or partnership opportunities.