Good morning, and welcome to our release of full-year and fourth quarter 2019 performance results for FDIC-insured institutions.

The banking industry remains strong, despite declines in full-year and quarterly net income.  Positive loan growth, stable asset quality indicators, and a decline in the number of "problem banks" continued during the fourth quarter.

The record-long economic expansion continued in the fourth quarter.  However, with three reductions in short-term rates during the second half of 2019, challenges in lending and funding persisted.  The environment to attract and expand loan customers and depositors remains competitive and challenging.  Consequently, banks need to maintain rigorous underwriting standards and prudent risk management.

Awareness of interest-rate, liquidity, and credit risks will position banks to be more resilient in maintaining lending.

Diane, I will now turn this over to you.  Thank you. 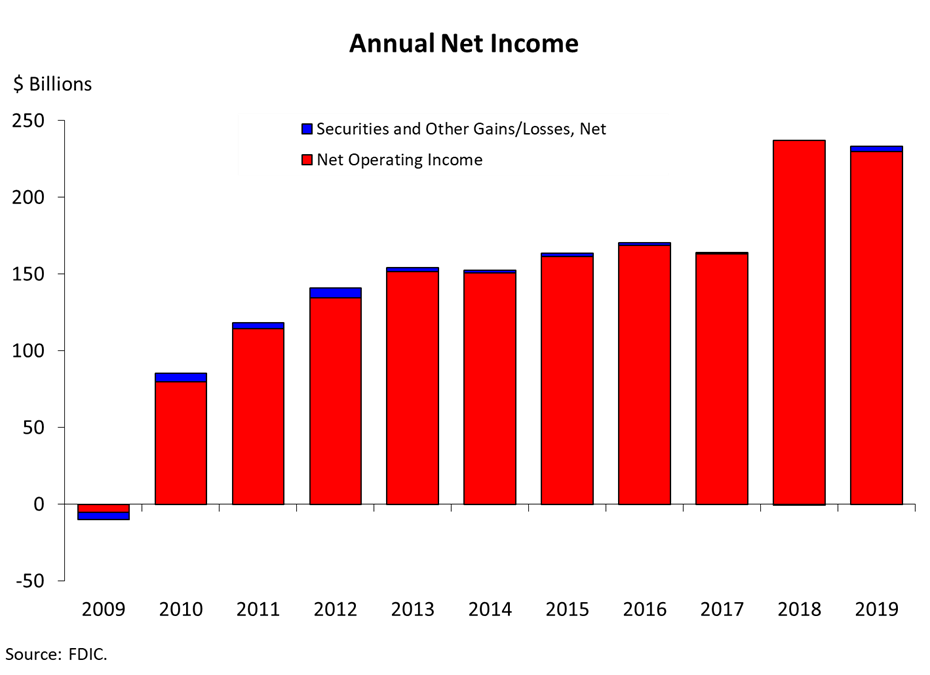 Our first chart shows that full-year 2019 net income fell to 233.1 billion dollars, down 1.5 percent from 2018.  The decline was primarily attributable to slower growth in net interest income, an increase in loan-loss provisions, and lower noninterest income.  The average return-on-assets ratio declined from 1.35 percent in 2018 to 1.29 percent in 2019. 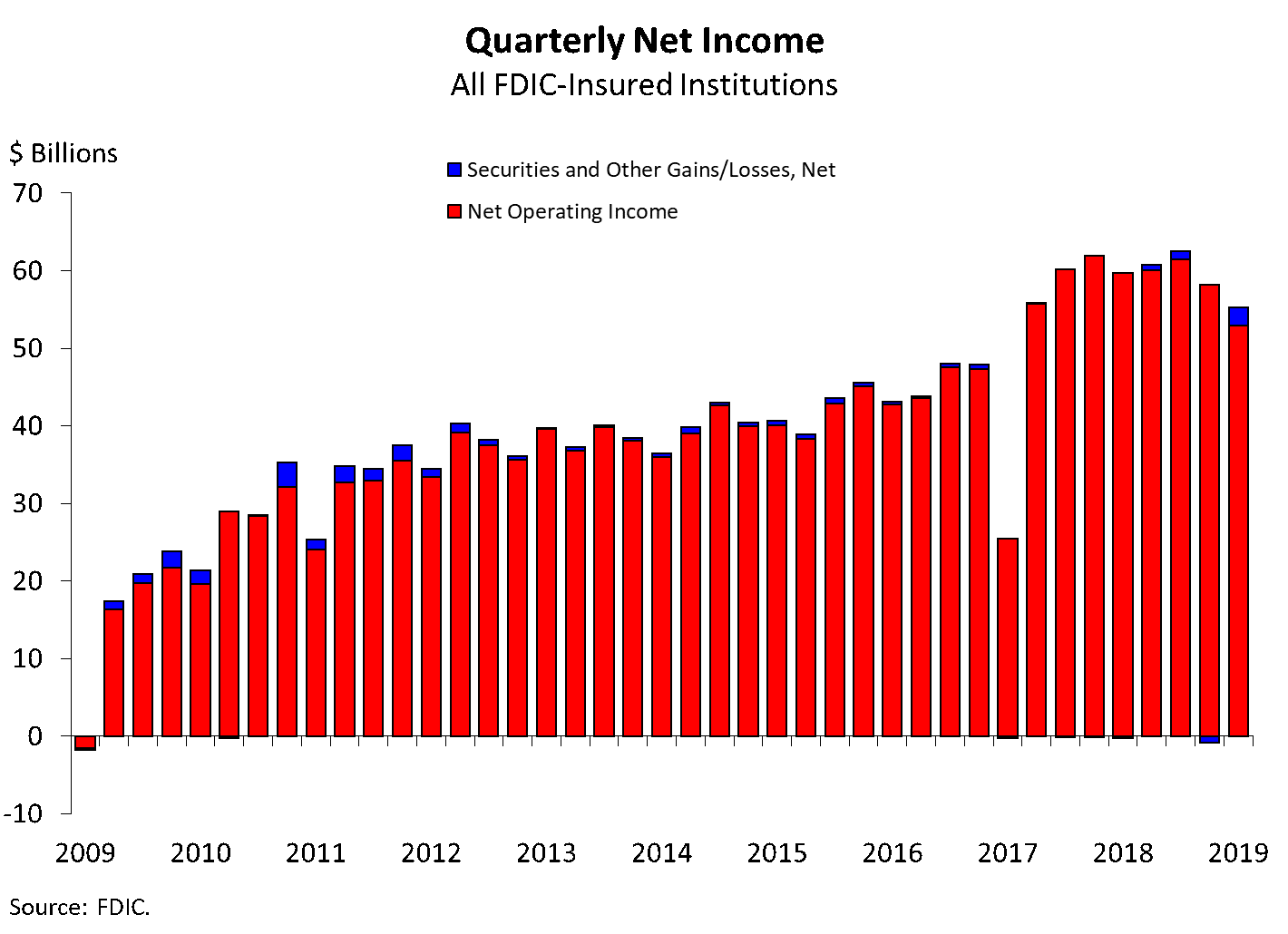 Chart 2 shows that the banking industry reported quarterly net income of 55.2 billion dollars during the fourth quarter, a 6.9 percent decline from a year ago.  About half of all banks reported annual declines in net income and 7.2 percent of institutions were unprofitable.  The industry’s return-on-assets ratio was 1.20 percent in the fourth quarter, down from 1.33 percent a year ago.  The decline is attributable to reductions in net interest income and increases in noninterest expense.

Community banks reported quarterly net income of 6.4 billion dollars in the fourth quarter.  Unlike the industry as a whole, this was an increase of 4.4 percent from a year ago. 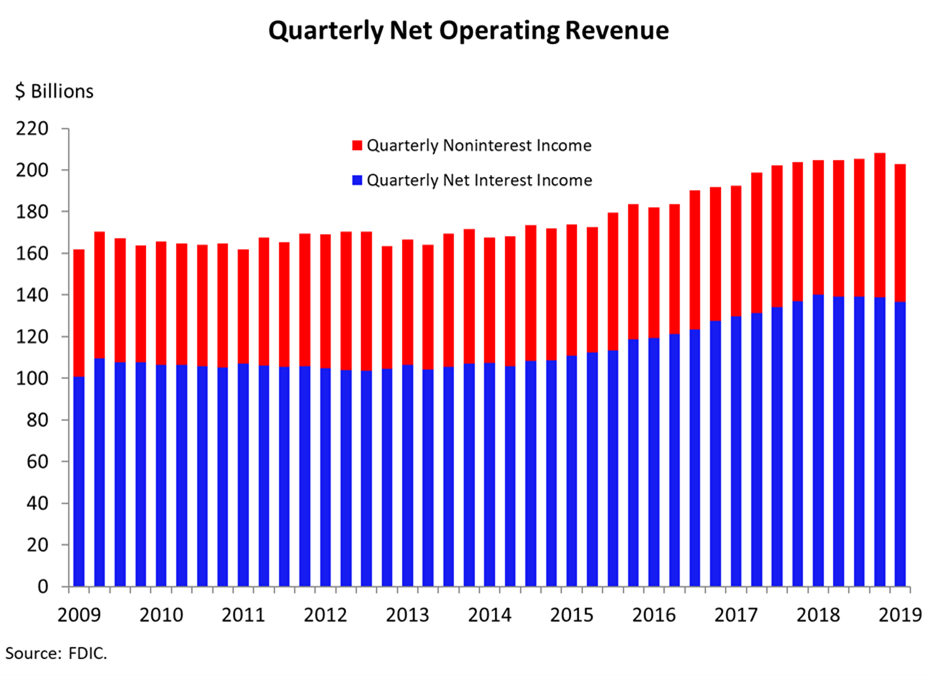 The next chart shows that net operating revenue totaled 202.8 billion dollars in the fourth quarter, down less than 1 percent from a year ago.  The decline in revenue was due to lower net interest income, which fell by 2.4 percent.  This was the first annual decline since third quarter 2013, and the result of lower yields on earning assets.

Noninterest income improved by 2.5 percent from a year ago, led by higher trading revenue and an increase in net gains on loan sales.

Chart 4 shows that the average net interest margin for the industry was 3.28 percent in the fourth quarter, down from a recent high of 3.48 percent at year-end 2018.  The decline was broad-based, as net interest margins declined for all five asset size groups featured in the Quarterly Banking Profile.  The decline was caused by yields on earning assets falling more than funding costs. 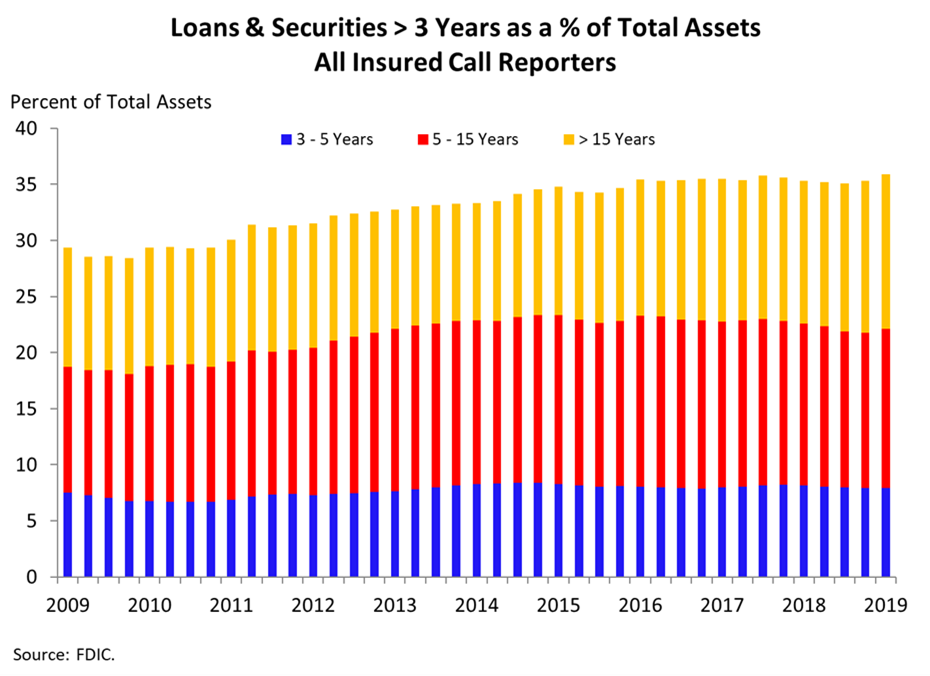 Chart 5 shows that the share of longer-term assets relative to total industry assets reached a new high in fourth quarter 2019, with more than one-third of industry assets maturing or repricing in three or more years.

The interest-rate environment continues to challenge banks.  During the post-crisis period of low interest rates, some banks responded by "reaching for yield" by investing in longer-term assets or reducing liquid assets to increase their yield on earning assets and maintain net interest margins.  In the current low interest-rate environment, banks, once again, are growing long-term assets.  However, these assets are being originated at lower yields, which contributed to the decline in net interest margins. 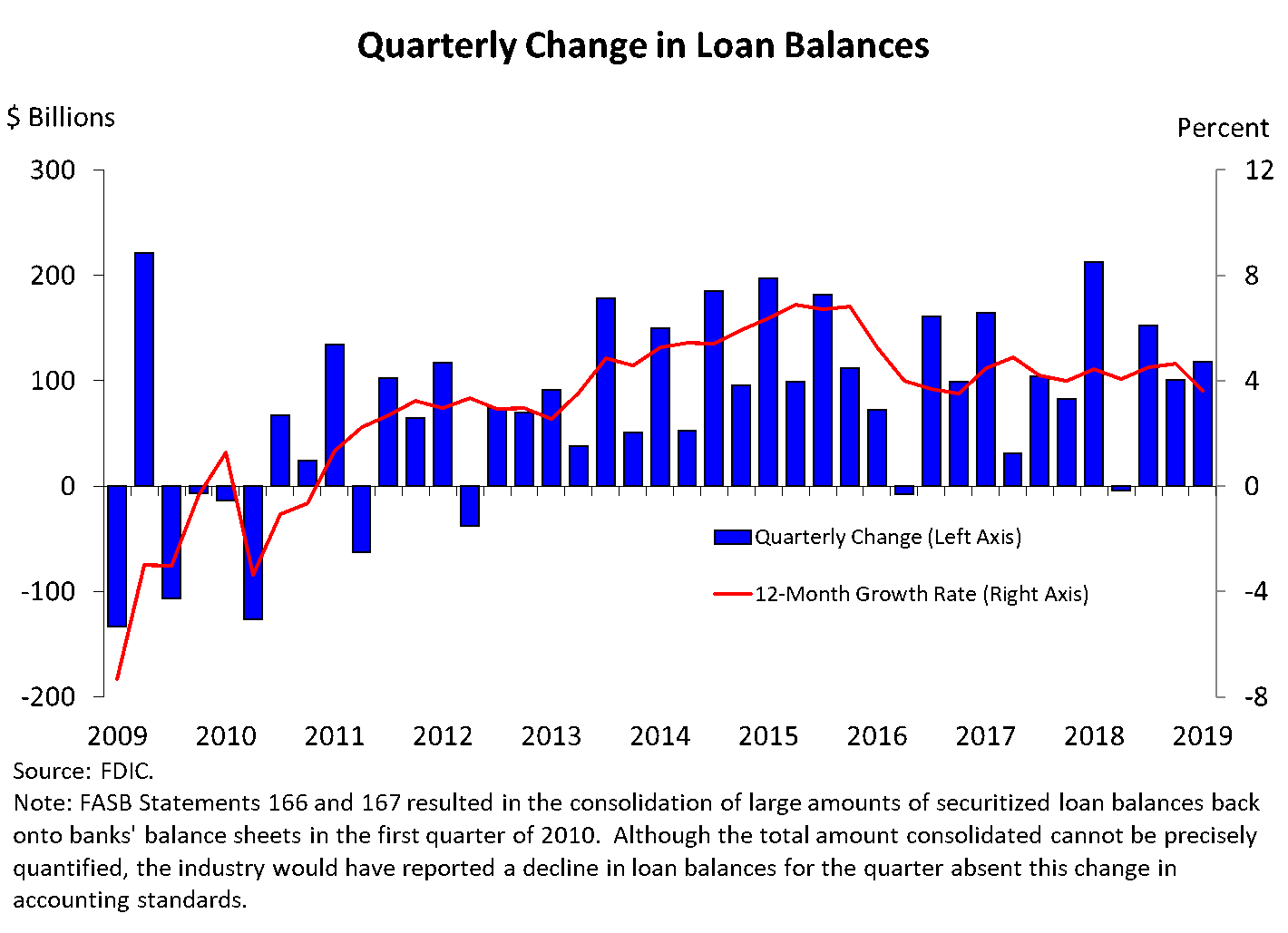 Chart 6 shows that loan balances rose by 117.9 billion dollars during the fourth quarter and 3.6 percent during the last year.  Almost all of the major loan categories reported quarterly increases, except for the commercial and industrial loan portfolio, which reported the first quarterly decline since fourth quarter 2016.  On an annual basis, the commercial and industrial loan portfolio grew at its lowest rate since 2010.

Loan growth at community banks was strong, with total loans rising by 5.5 percent from a year ago.  The commercial real estate loan portfolio drove growth among community banks, with increases in loans for both existing properties and for construction and development. 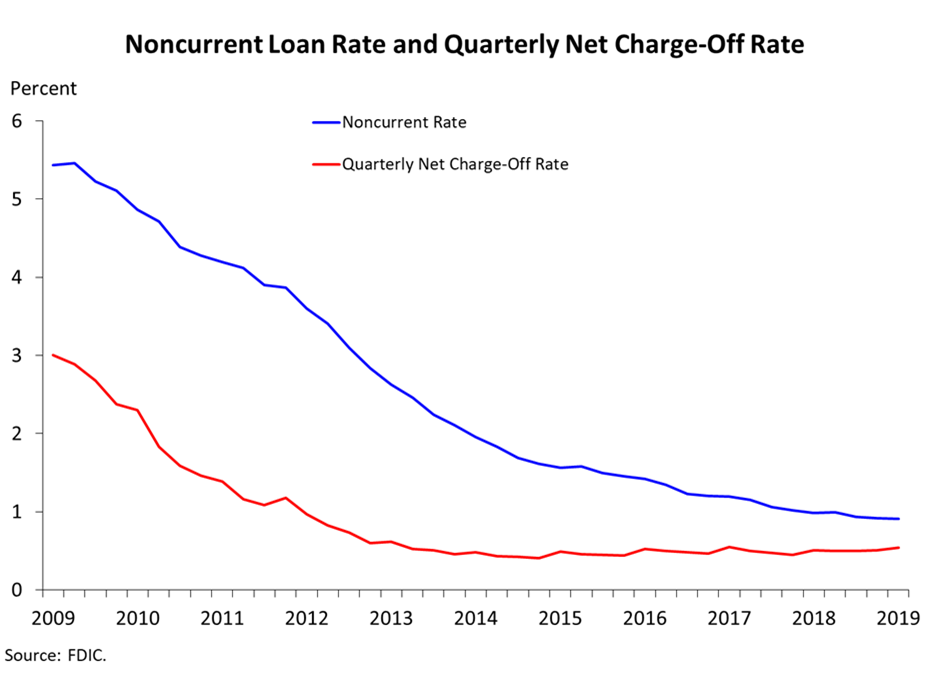 The next chart shows that asset-quality indicators remain generally stable.  The noncurrent loan rate declined by 1 basis point from the previous quarter to 0.91 percent, while the net charge-off rate rose by 4 basis points from a year ago to 0.54 percent. 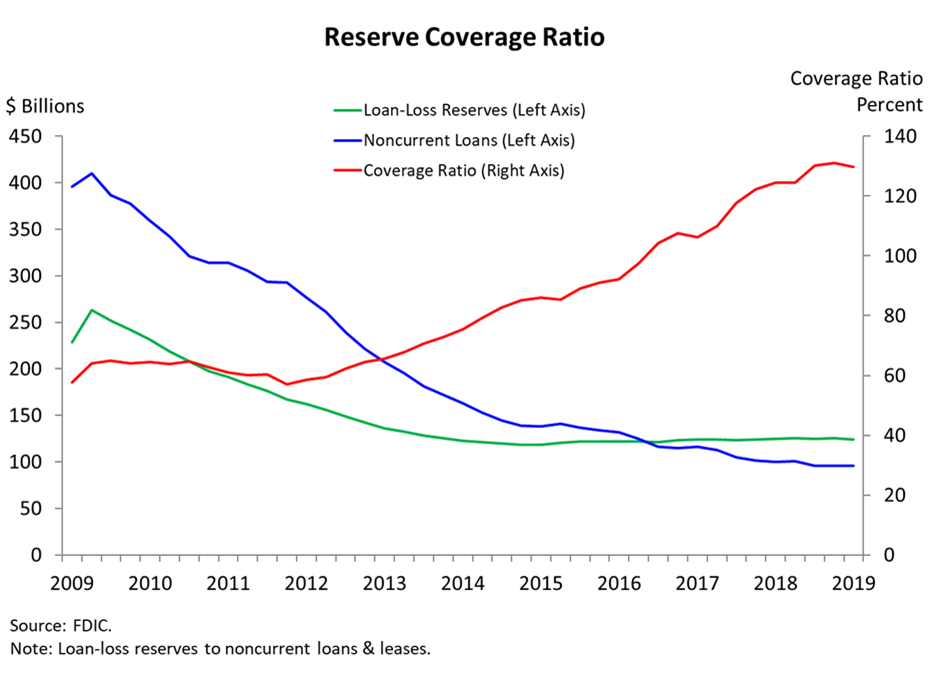 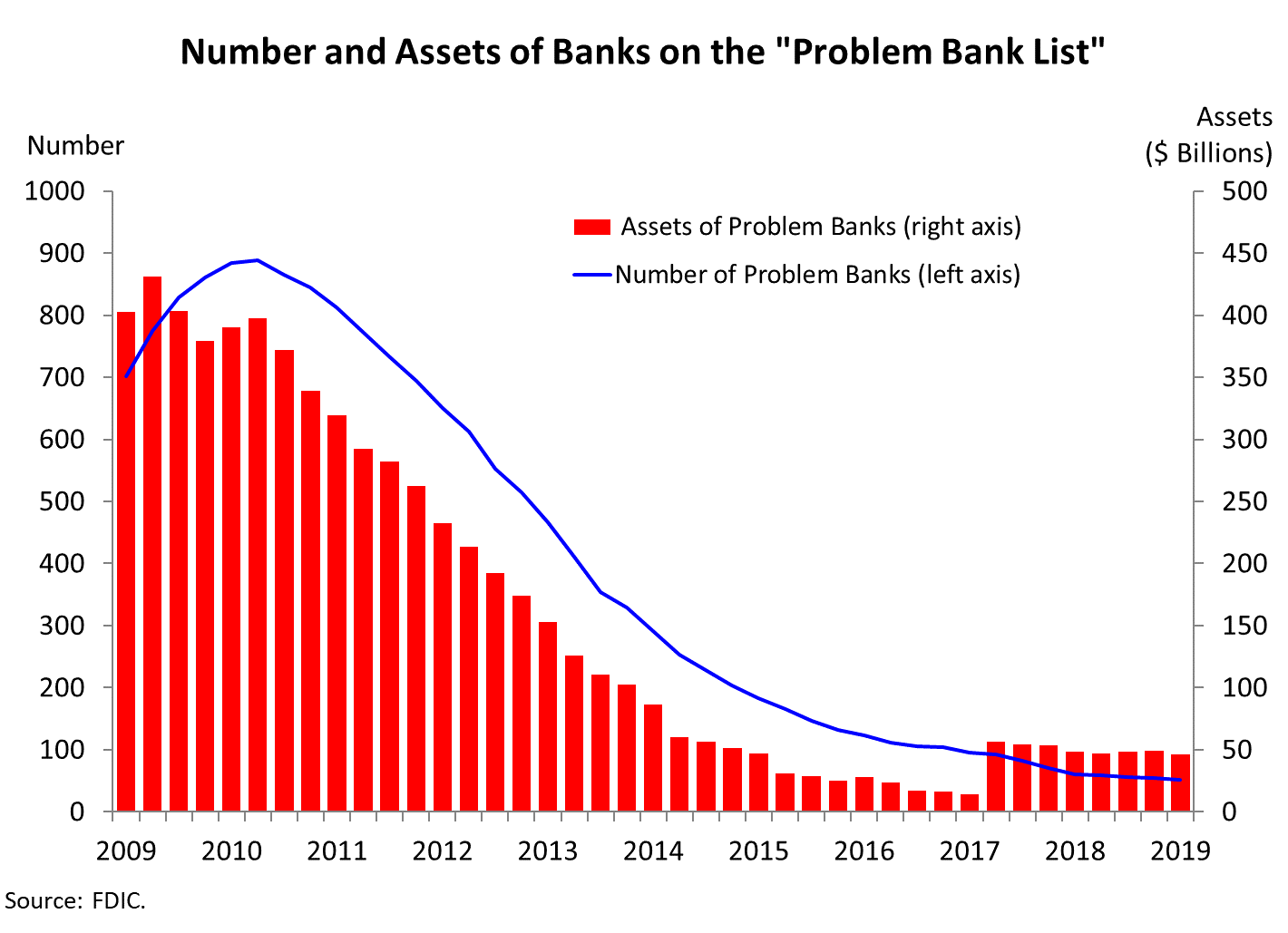 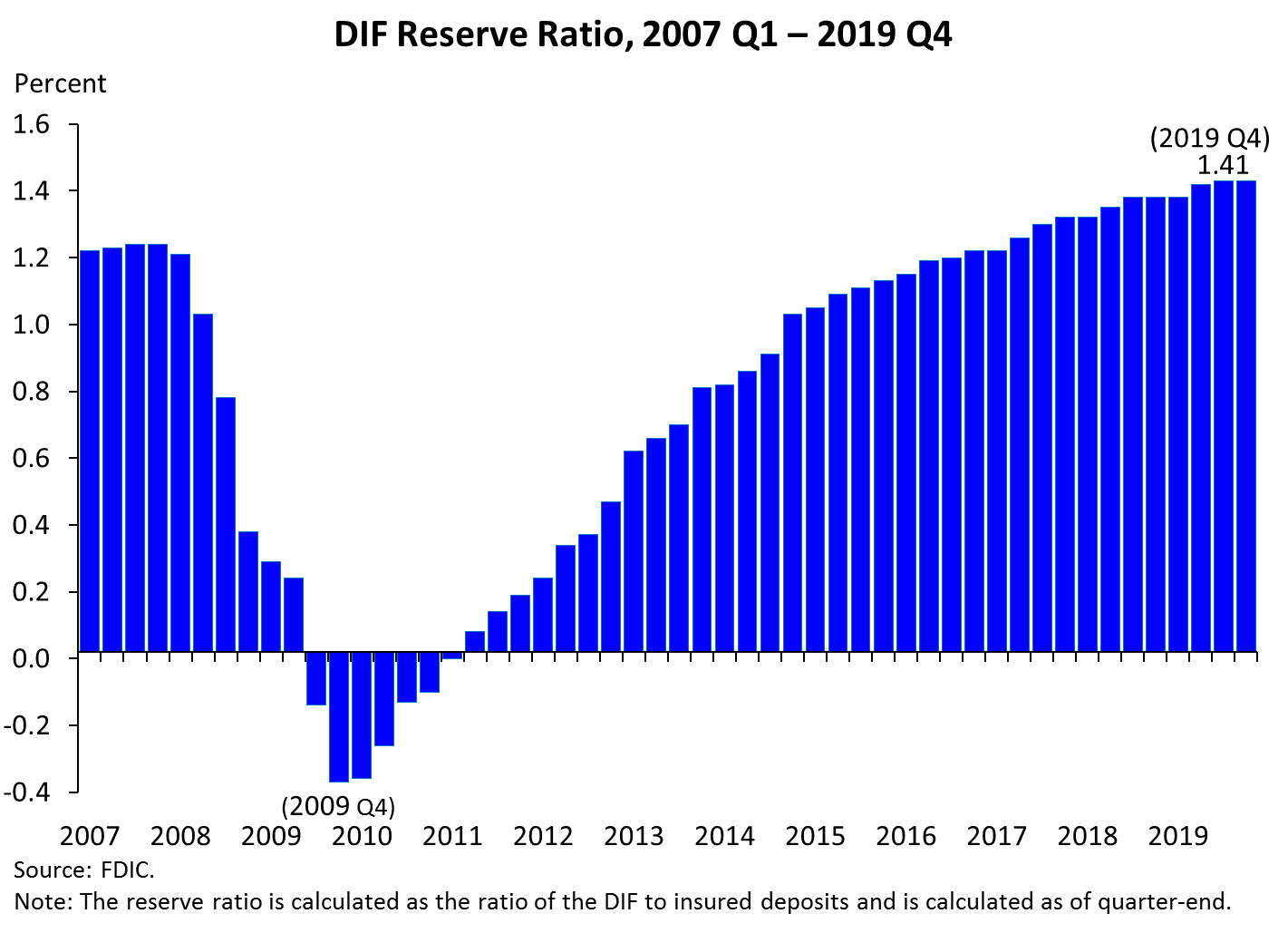 Chart 10 shows that the reserve ratio—the amount in the Deposit Insurance Fund relative to insured deposits—remained at 1.41 percent at the end of December.

We will now answer questions regarding full-year or fourth-quarter performance of the banking industry.