Good afternoon, and welcome to our release of third quarter 2018 results for FDIC-insured institutions.

It is worth noting that the current economic expansion is the second-longest on record, and the nation's banks are stronger as a result.

While results this quarter were positive, the extended period of low interest rates and an increasingly competitive lending environment have led some institutions to "reach for yield." Additionally, the competition to attract loan customers has been strong, and it will remain important for banks to maintain their underwriting discipline and credit standards. These factors have led to heightened exposure to interest-rate risk and credit risk.

Attention to the prudent management of these risks will position banks to be resilient so that they can sustain lending through the economic cycle. 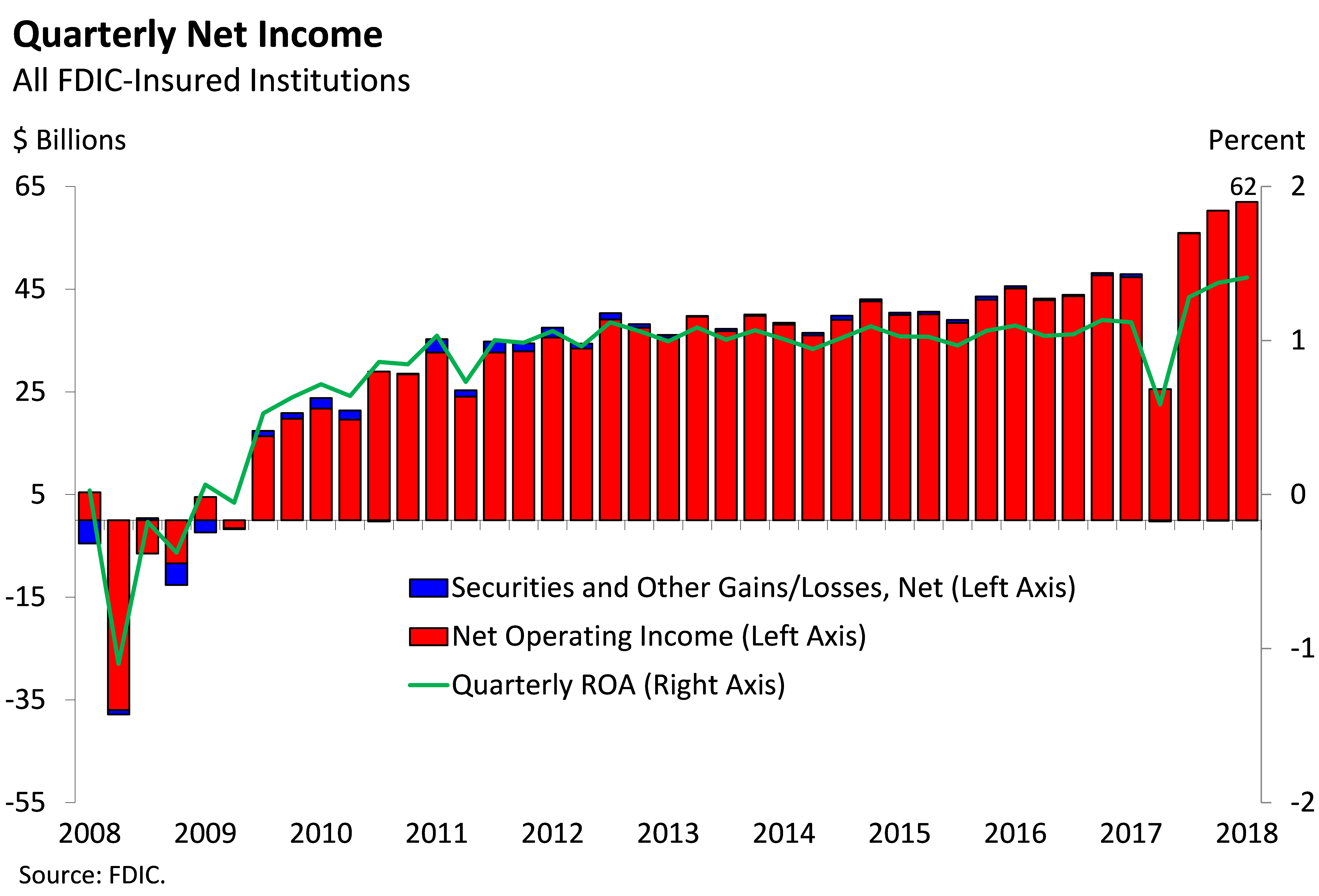 Our first chart shows that net income for the industry was 62 billion dollars in the third quarter, up 29.3 percent from a year ago.

About half of the dollar increase in net income was attributable to tax reform. Assuming the effective tax rate for the banking industry prior to the new tax law, we estimate that quarterly net income would have been 54.6 billion dollars, or 13.9 percent higher than third quarter 2017. The return-on-assets ratio increased to 1.41 percent in the third quarter from 1.12 percent one year ago. This is the highest quarterly level reported by the industry since the Quarterly Banking Profile began in 1986. 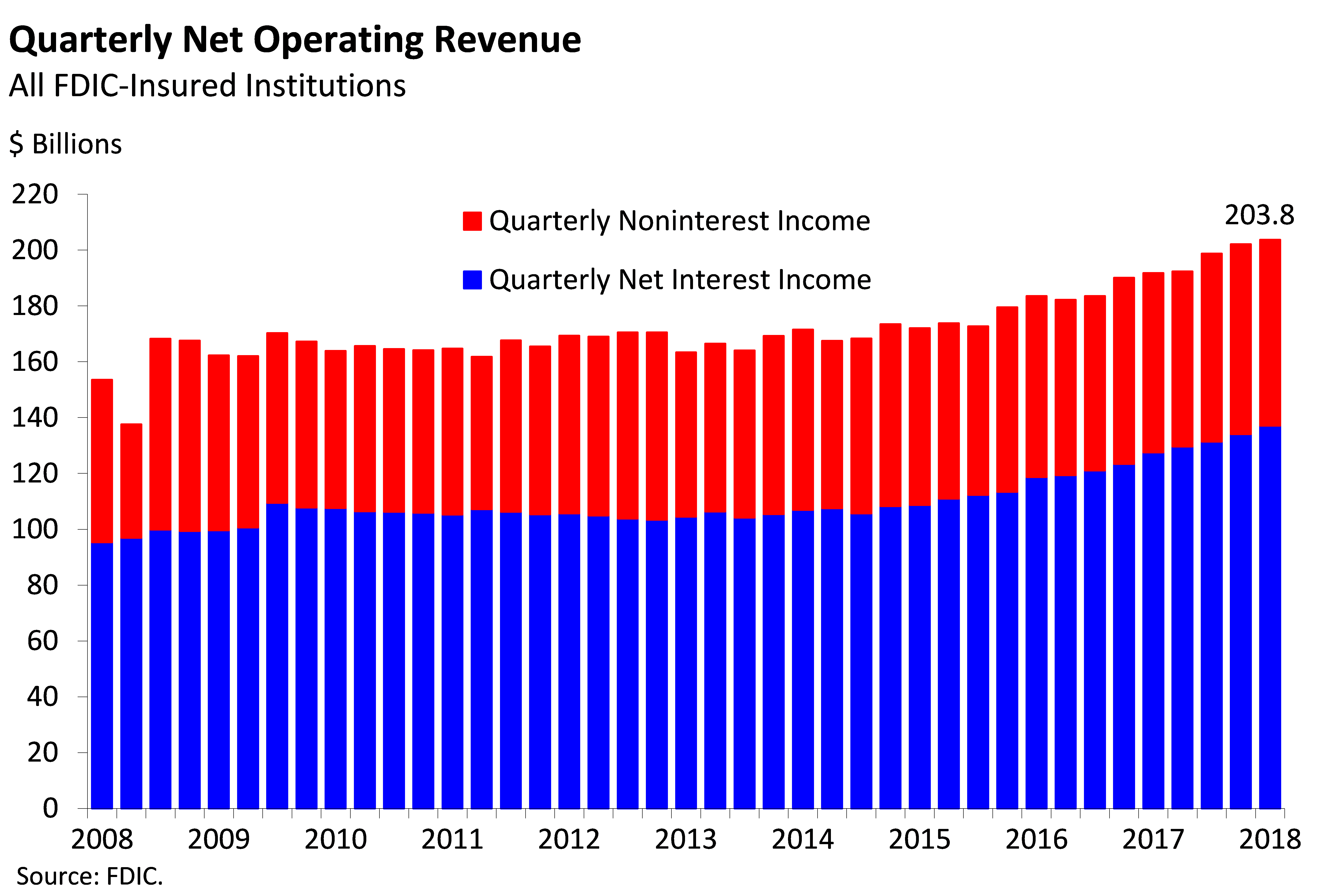 The next chart shows that net operating revenue totaled 203.8 billion dollars in the third quarter, an increase of 6.2 percent from a year ago. The increase in revenue was broad-based across the industry, as close to 80 percent of all banks reported higher revenue than a year earlier. 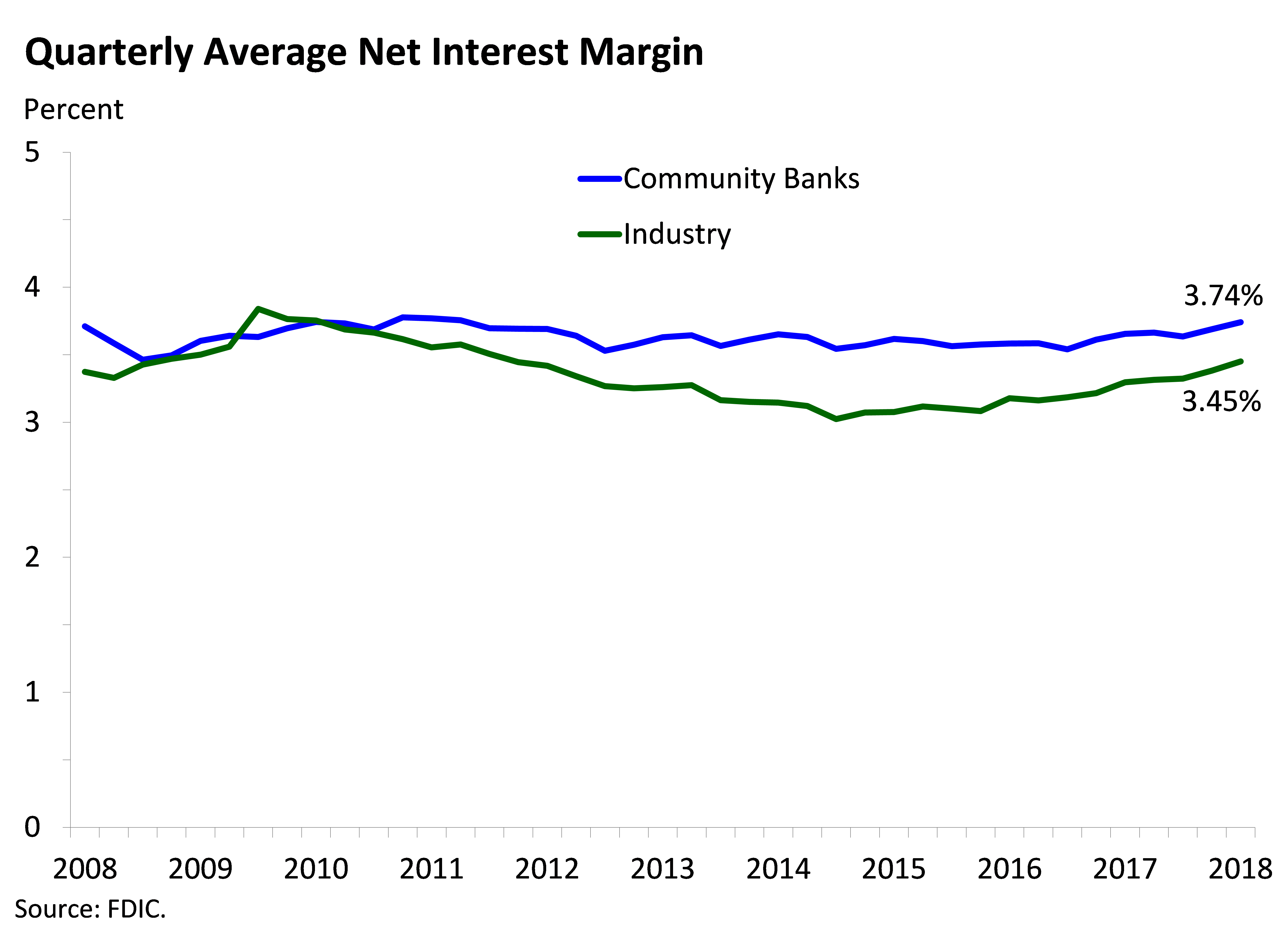 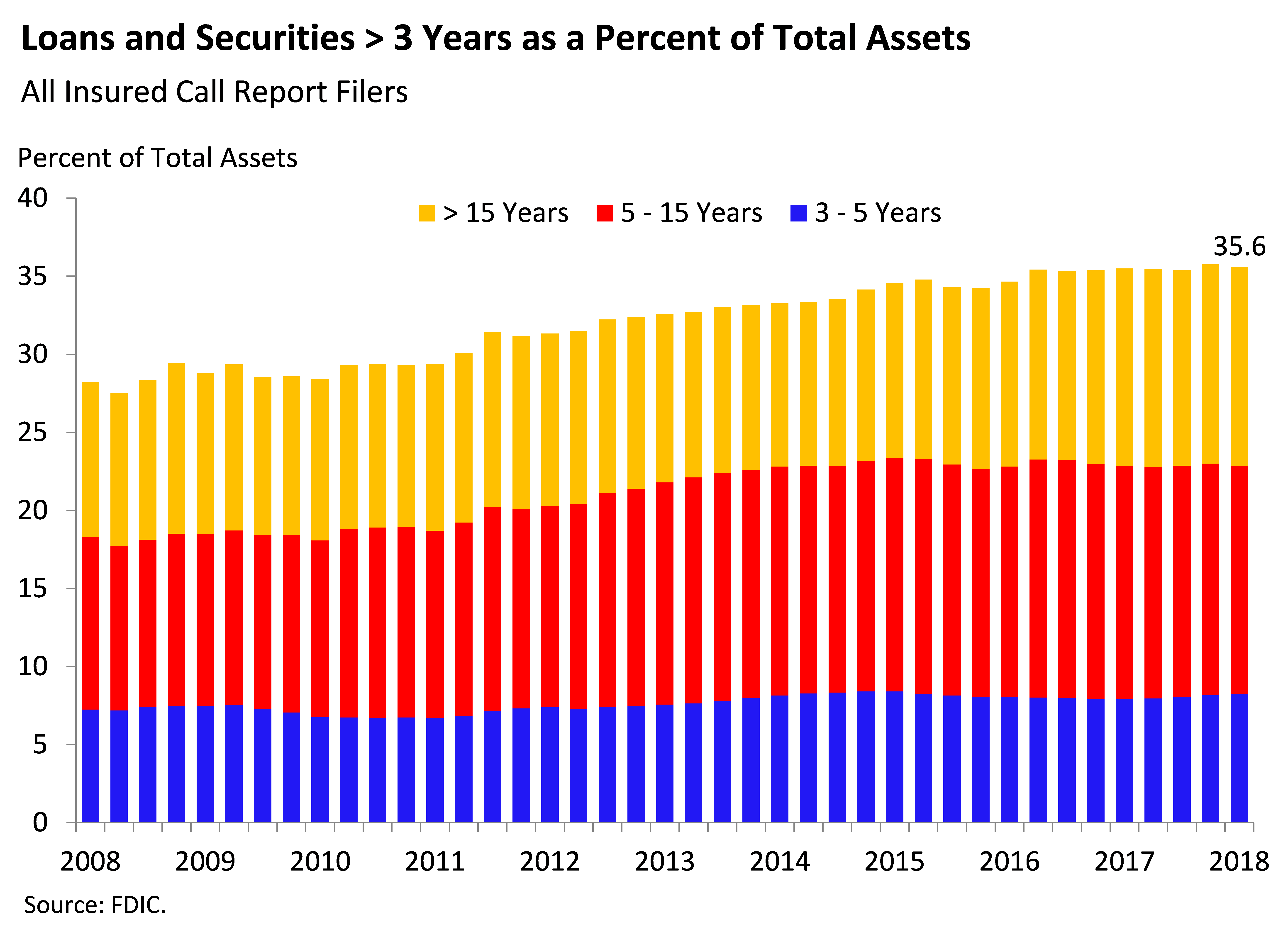 Chart 4 shows that the shares of longer-term assets relative to total industry assets remain elevated, with more than a third of industry assets maturing or repricing in three or more years.

Further flattening of the yield curve in conjunction with banks' increased proportion of long-term assets could be a headwind against future earnings.

So far, increases in interest rates have been largely beneficial to most banks as assets have repriced at a faster rate and in a greater amount than liabilities. Repricing of deposits in response to depositor demands for increased rates could result in earnings pressure for banks, particularly those that have a significant amount of long-term assets or those that are reliant on rate-sensitive deposits. 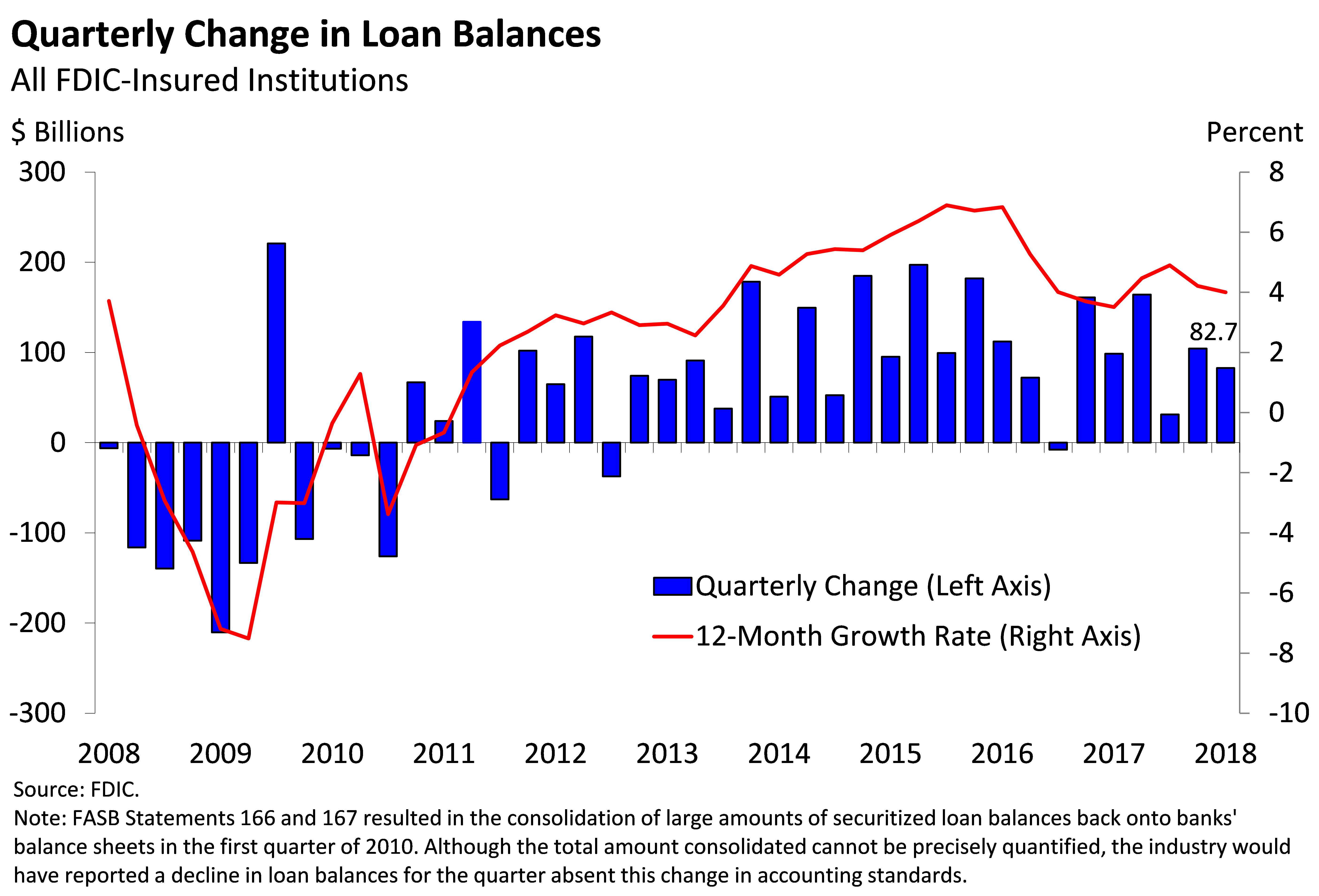 Chart 5 shows that loan balances increased by 82.7 billion dollars during the third quarter, as all major loan categories registered growth. The largest increases were in consumer loans, led by credit card balances, residential mortgage loans, and commercial and industrial loans.

Over the past year, loan balances rose by 4 percent. This is a slight decline from the 4.2 percent annual growth rate reported last quarter.

Loan growth at community banks was also strong, measuring 6.6 percent for the past 12 months, led by growth in commercial real estate loans, residential mortgages, and commercial and industrial loans. 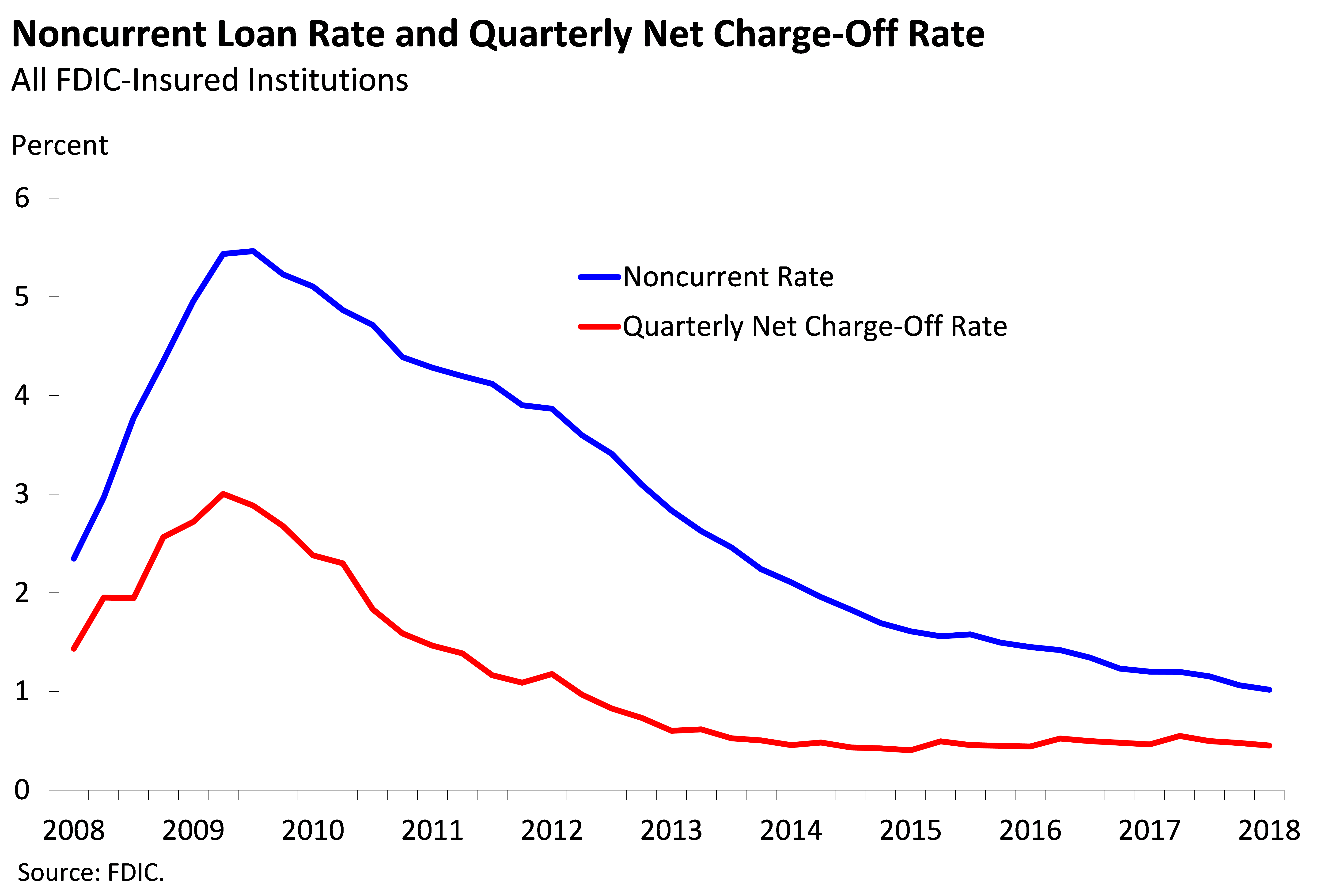 We continue to monitor trends in the agricultural sector. Commodity prices remain low, and net farm income has declined by roughly 50 percent since reaching its peak in 2013. Farmland loan delinquencies have ticked up, but remain relatively low. 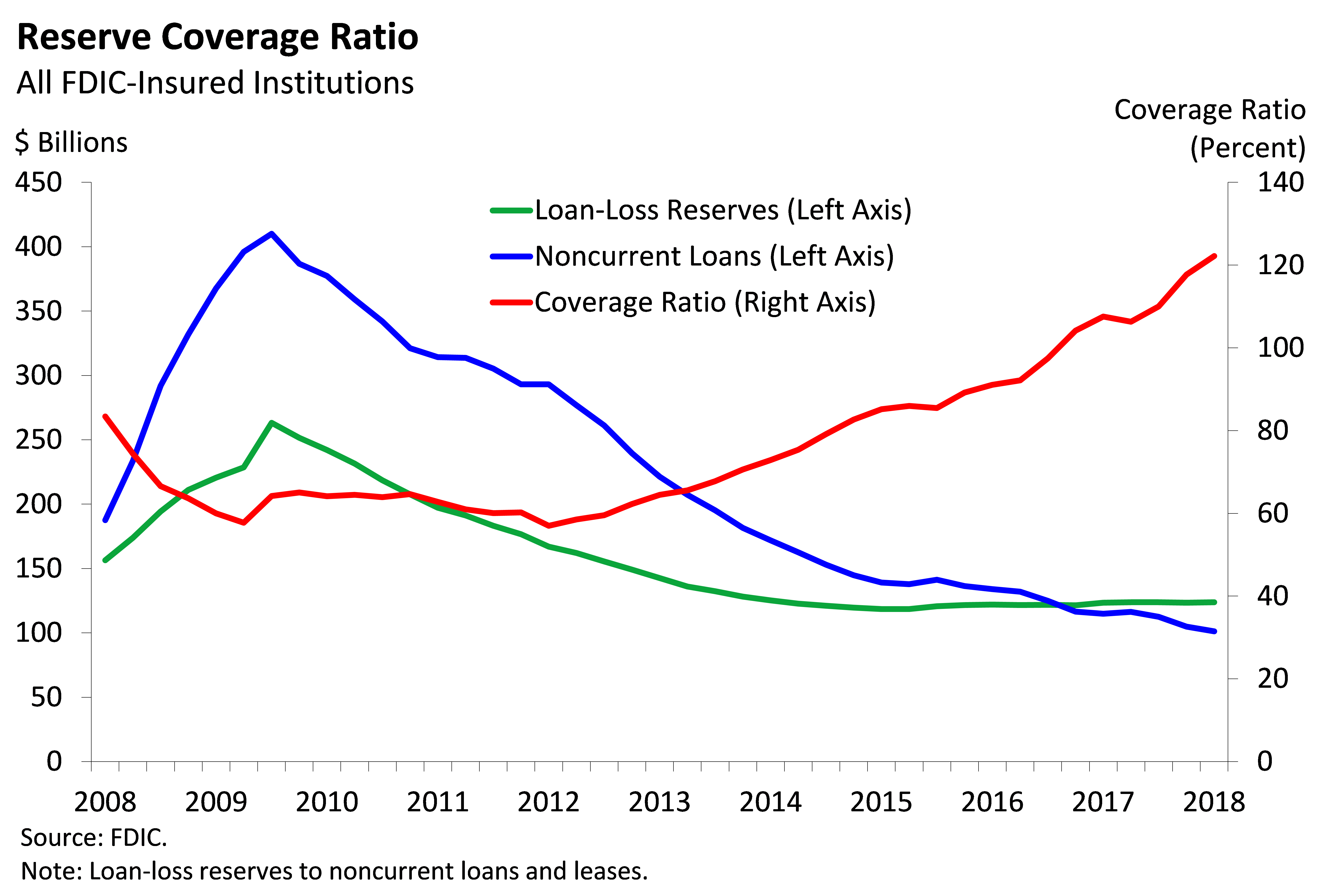 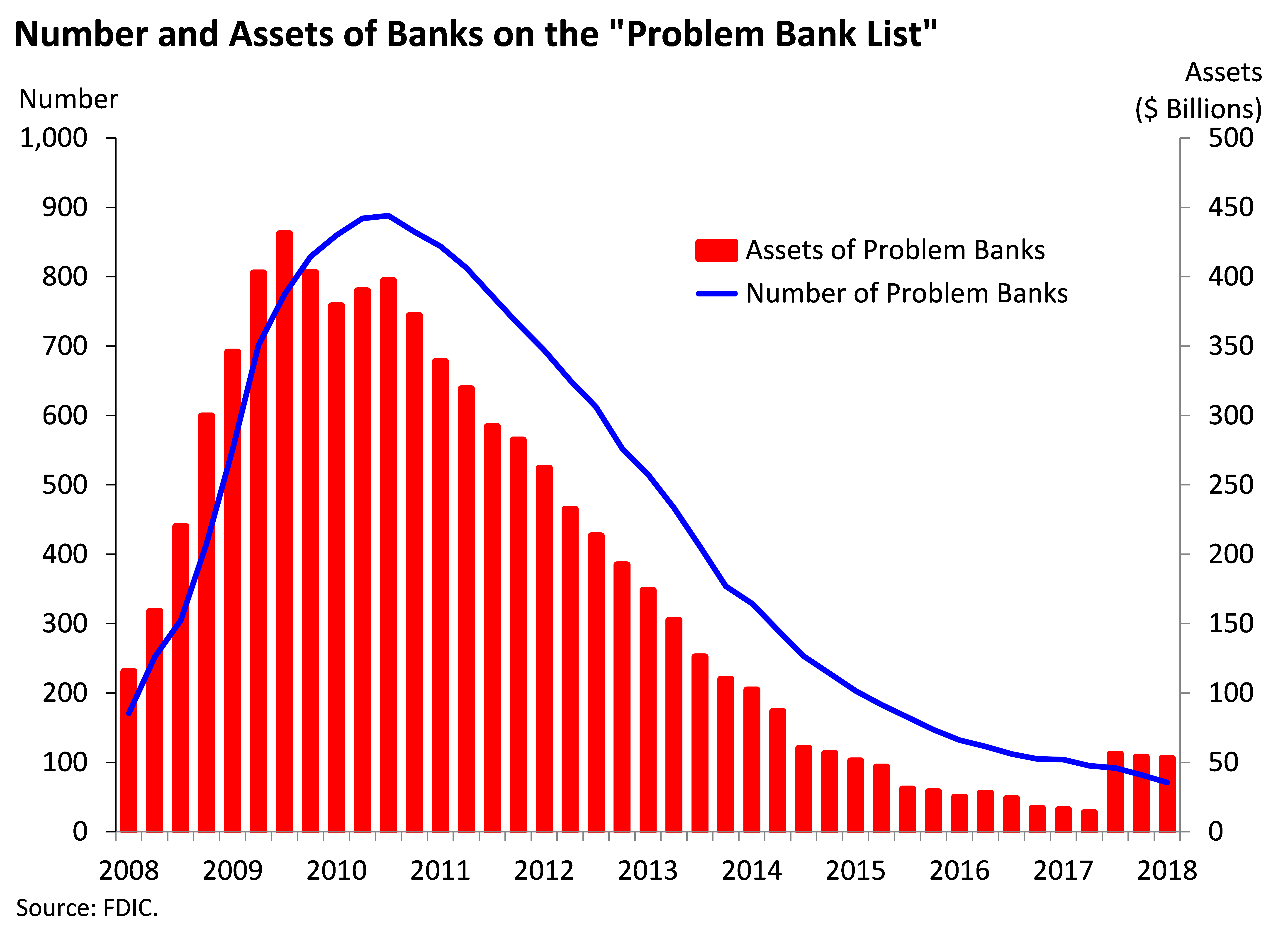 Chart 8 shows that the number of banks on the FDIC's "Problem Bank List" declined from 82 to 71 during the quarter. This is the lowest number of problem banks since third quarter 2007. One new bank opened, and no failures occurred in the third quarter. 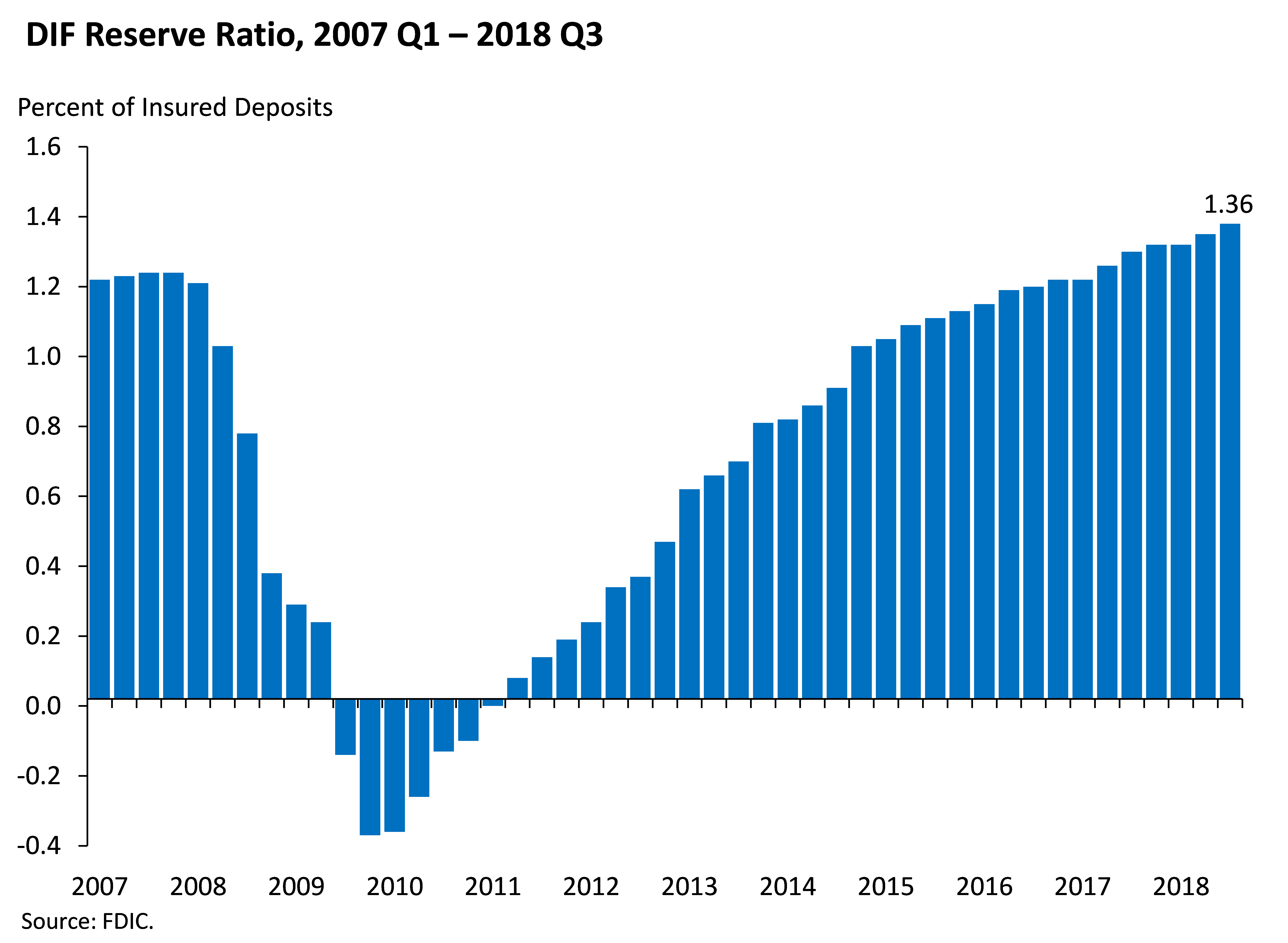 The Deposit Insurance Fund balance was 100.2 billion dollars on September 30, up 2.6 billion dollars from the end of last quarter. The increase in the fund was largely driven by assessment income. Estimated insured deposits totaled 7.4 trillion dollars at the end of September, increasing 0.3 percent in the second quarter and 3.8 percent over the past four quarters.

Chart 9 shows that the reserve ratio—the amount in the Deposit Insurance Fund relative to insured deposits—was 1.36 percent on September 30, up from 1.33 percent at the end of last quarter.

Since the reserve ratio was 1.36 percent on September 30, it has achieved the minimum reserve ratio of 1.35 percent that is required by law. As a result, the third quarter of 2018 marks the last period that large banks will be assessed quarterly surcharges by the FDIC.

When the reserve ratio is at or above 1.38 percent, small banks will receive credits for the portion of their assessments that contributed to growth in the reserve ratio from 1.15 percent to 1.35 percent. We estimate these credits to be approximately 750 million dollars in aggregate.

We will now answer any questions you have regarding third-quarter performance of the banking industry.

And with that, we will take questions.